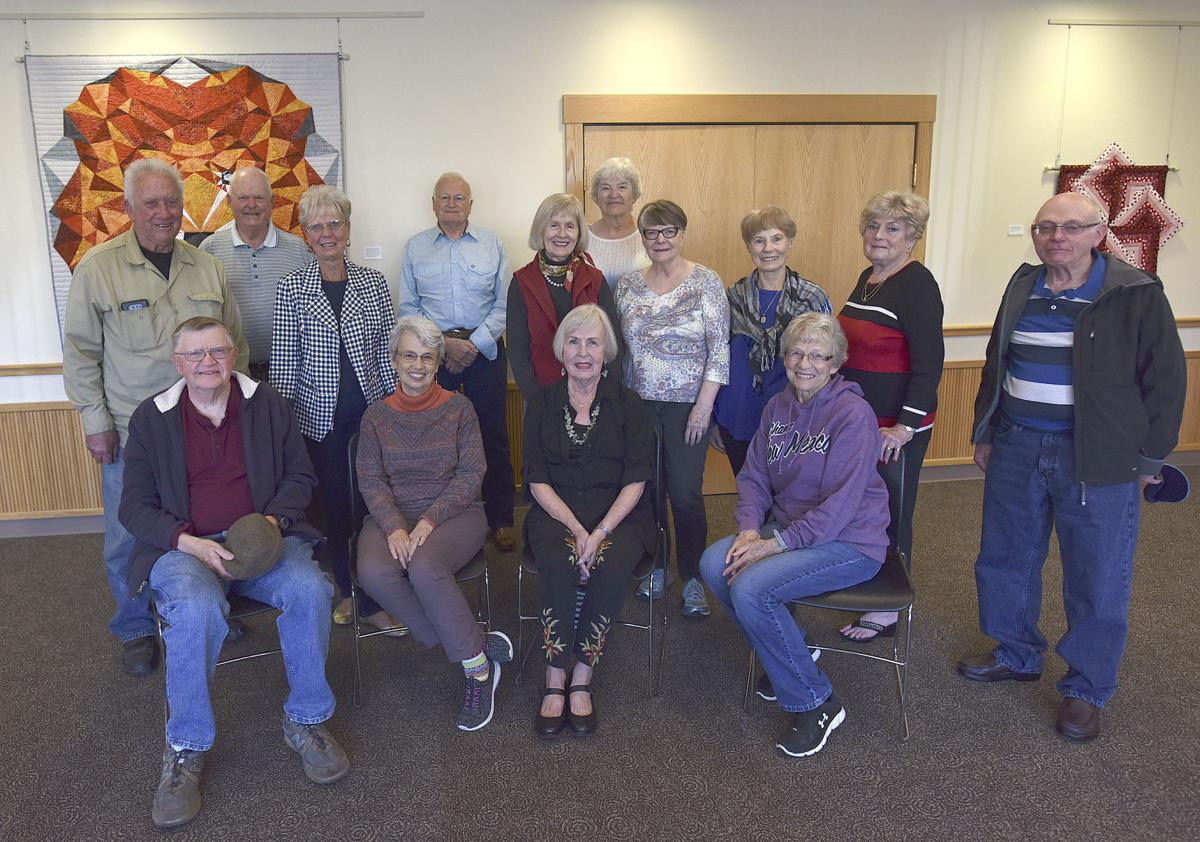 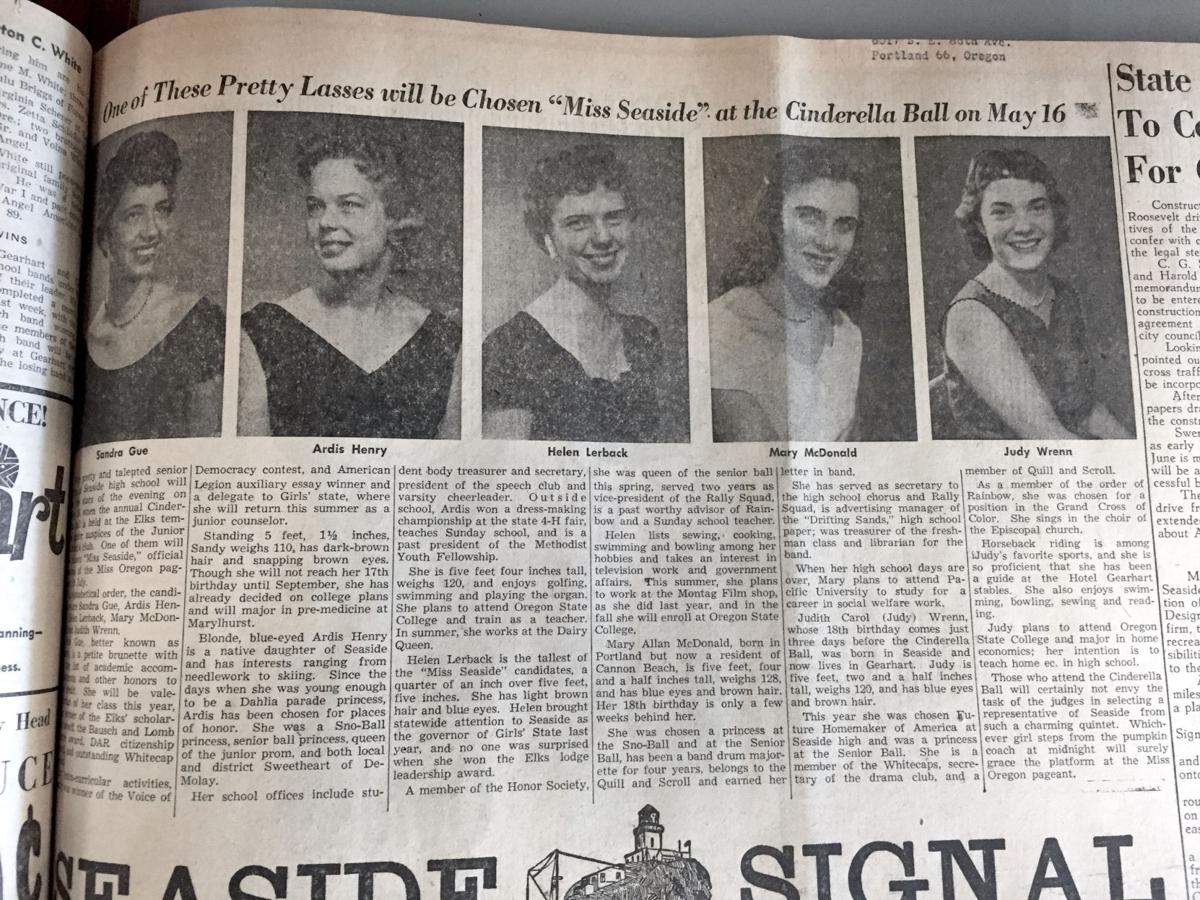 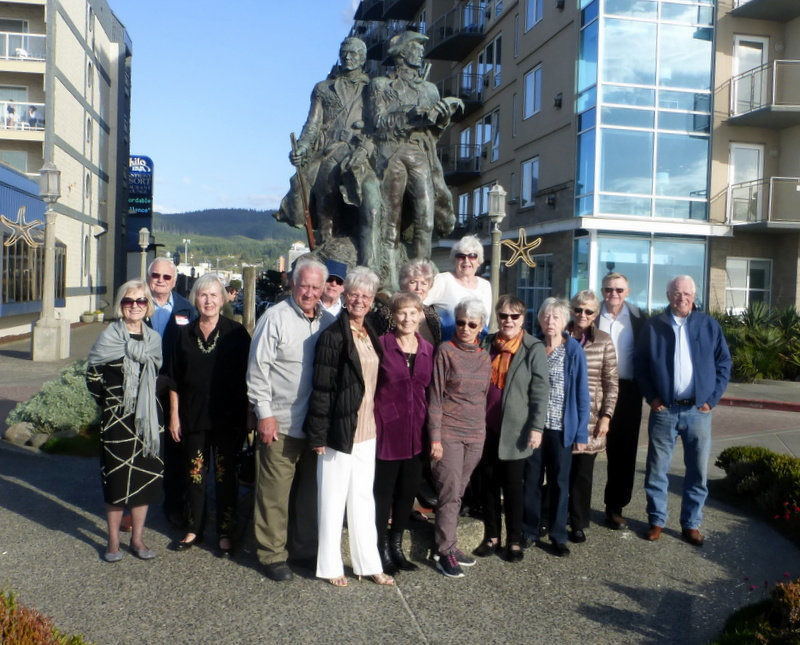 Members of the Seaside High School Class of '58.

Members of the Seaside High School Class of '58.

In 1958, Nikita Khrushchev assumed control of the Soviet Union. Elvis Presley was inducted into the U.S. Army. The average cost of a house was $12,270.

For the 69 grads of 1957 and the 67 of the class of 1958, the world was mostly constrained by the junction to the south and the high school to the north, the prom to the west and the hills to the east. Alumni from those classes convened in Seaside for a weekend reunion on Oct. 4 at the Seaside Library.

Sue Ward Lee described the freedom to ride a horse in the hills “all day as long as I got back for dinner.”

“My dad and mother just said, ‘Be independent.’ That was their goal.”

“It was the same with the Gearhart kids,” Judy Wrenn Carder added.

Downtown was much busier then, said Carol deLange Brenneman. “It astounds me when I go downtown in Seaside at this point during the summer at night. It’s really quite quiet. You can look down the street and hardly see any cars.”

In the 1950s, teens would cruise “around, car to car and car, in order to meet and greet,” Brenneman said.

It was so safe in Seaside, “we never did lock a door.”

The threat of a tsunami had yet to be recognized; most didn’t even hear the word until the Alaska quake and tsunami of 1964.

In those days, baseball was clearly America’s pastime, and Seaside’s Gulls were at the top as the No. 1 team in 1957. In 1958, the football Gulls played for the title, losing to Vail in the championship. Members of those teams — Ron Johnson, Garry Holmes and Neal Maine — were among classmates at the reunion.

Class members described the school spirit, both on the field and among students. The band would practice before classes and march onto the field during games. The band had between 60 and 70 members — out of a total school size of 250.

“We were small, but mighty!” Lee said.

It wasn’t only athletics where the class excelled, said Sandra Gue Price, the 1958 valedictorian.

“We had really good courses,” she said. “We had algebra, trigonometry, geometry and calculus. That was the math program.”

History teacher Carl Nydegger taught students critical skills, Lee recalled. “He said: ‘Read, but look at where your source comes from. Then decide.’ Which is very different from what’s on Facebook, (where) you take what’s there and run with it.”

“I never had a teacher like him,” she added.

At a time when nuclear energy was in its infancy, science teachers introduced students to the topic, Laws said.

Brenneman’s favorite faculty member was principal Leo Marlantes, who also taught social studies and world geography. “He always had a personal word that he would say to me that would be encouraging, whatever it would be,” she said.

“We all thought Mr. Marlantes was perfectly wonderful,” Ruth Elliott said. “Our teachers were our friends, someone we looked up to.”

Neal Maine said teachers offered “a lot more focus on you as a person, developing yourself and encouragement from the teachers.”

“Honestly, as I look back, if I hadn’t bumped into Mr. (Sherman) Black I don’t know where I would have ended up,” Maine said. “It was about the people, about you as a person, not so much you were getting straight As.”

The 1950s in Seaside saw an abundance of good eating, drinking, music and dancing.

Alumni recalled dining at the Par-Tee Room, Palm Beach Cafe and the Crab Broiler. The Crab Boiler was so good, people would wait for a table for hours, Price recalled.

“They had the best coleslaw on the whole coast,” Ron Johnson said. “It was just a real quiet, smooth place to spend a few hours and have a drink.”

“I remember a place called the Embers,” Lee said. “I couldn’t go because I was too young. When I turned 21, I said to my brother, ‘Take me to the Embers.’ They had the best jazz collection of anybody in Seaside, the best drink, and the atmosphere was almost continental.”

“I thought all towns had as many restaurants as we did around here, since we were a tourist town and there were always a lot of restaurants,” Carder added. “Then you’d go to another town the same size, but there were only one or two. We asked, ‘What’s going on? Why aren’t there all those restaurants?”

Others remembered dance parties at the Bungalow, and movies at the Times Theatre and the Strand. Trick-or-treating was done both downtown and door-to-door.

The crowning of Miss Oregon was a big event, at a time when Miss Seaside served as hostess of the event.

“I got to sit on the stage but didn’t have to do anything but enjoy the event,” Lee, Miss Seaside of 1957, said. “The year I was Miss Seaside, I got to accompany Miss Oregon all around the state. Why? Don’t ask me — I didn’t represent anything but Seaside. But boy, did I spread Seaside around!”

While many of the classes of 1957 and 1958 migrated, others remained or later came back.

Brenneman went away for almost 30 years before returning to Seaside. “It’s like salmon coming back,” Brenneman said. “The family house is here. It’s when you want a little slower pace in your life and to take it a little bit differently.”

Judy Wrenn Carder and her husband, Al Carder, lived in eastern Washington for 25 years. When Al retired, they returned to the beach. “We’ve been back here for 17 years and just love it,” she said.

“You don’t really let go of it,” Elliott put in. “One of my classmates, Judy Paulson, said ‘We all come home to die like elephants.’”

Price said she at one point considered returning to Seaside, but found that the cost of living had risen and there wasn’t much in the way of jobs. She eventually settled in the Queen Charlotte Islands in British Columbia, which she found “just like Seaside — trees, ocean, waves, and rocks, funky housing.”

Class members lamented some changes in Seaside — the lack of affordable housing and homelessness.

“We’re not dealing with our really needy people,” Brenneman said. “I think in the 1950s and ’60s we had better programs in place to help people.”

As a new campus goes up in Seaside’s Southeast Hills, classmates recalled that they were also in transition to a new high school building. Cost for the new building, paid for by a bond approved by voters, was $390,000.

In 1958, students attended classes in the old building as the new high school underwent construction.

“They had the windows open in spring, because of sawing, hammering and hollering,” Carl Larson, class of 1958, said. “It was quite a thing. I was thinking we had a new school already, but that thing is 60 years old.”

Price said she appreciates today’s Seaside campus relocation and the efforts by students, administration and staff. “Everything has been thought about, not just the school, and what it looks like, but the land and how things are being remediated. The kids came out of class and said, ‘I’m going to be there!’ They were so excited about it.”

“In my junior or senior year, the front of the entire high school fell on the front lawn,” Maine remembered. “It was brick and the whole brick front fell right in the front lawn. I remember this has got to be worth a few weeks off at least. They came and put big jacks on that entire brick panel and started cranking it up. We got out of school two lousy days. It was terrible.”