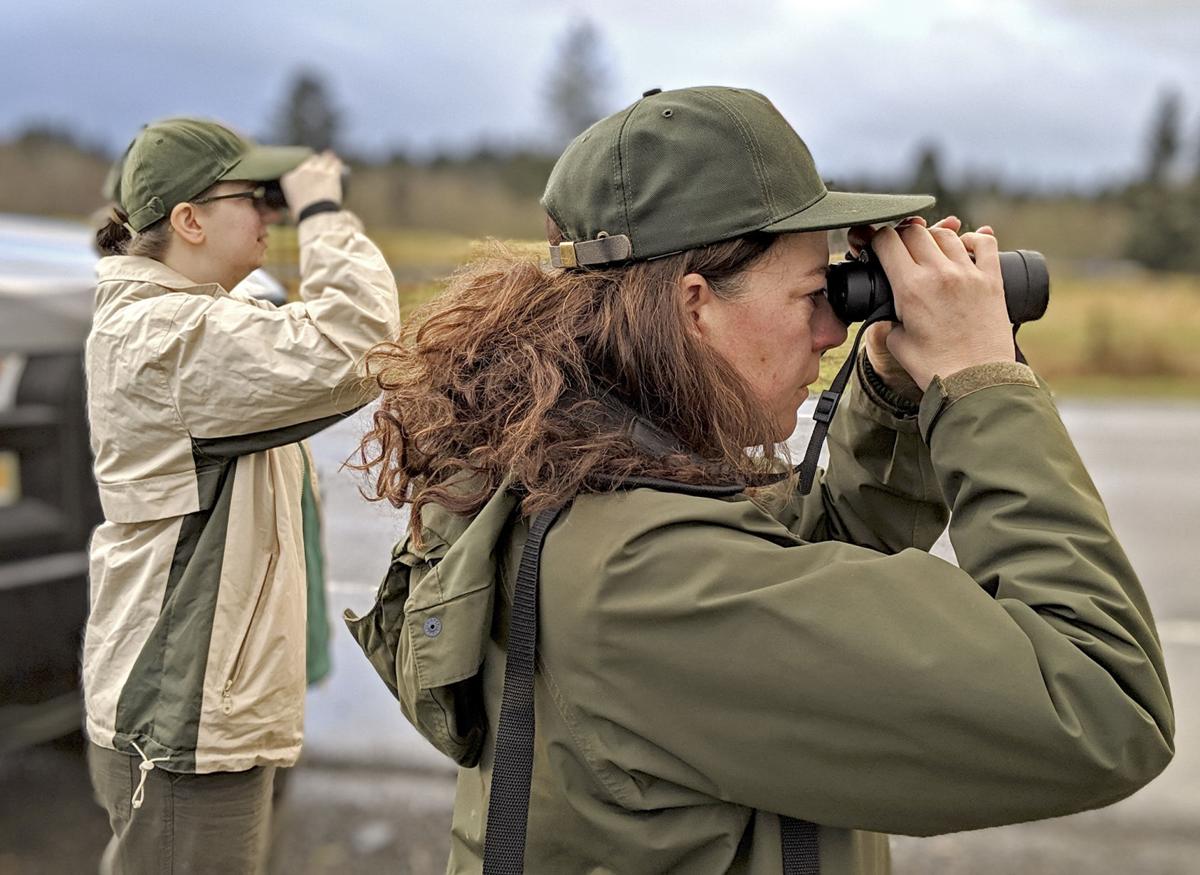 Corrine Bird, left, and Carla Cole count elk during a survey of the herds around the Lewis and Clark National Historical Park. 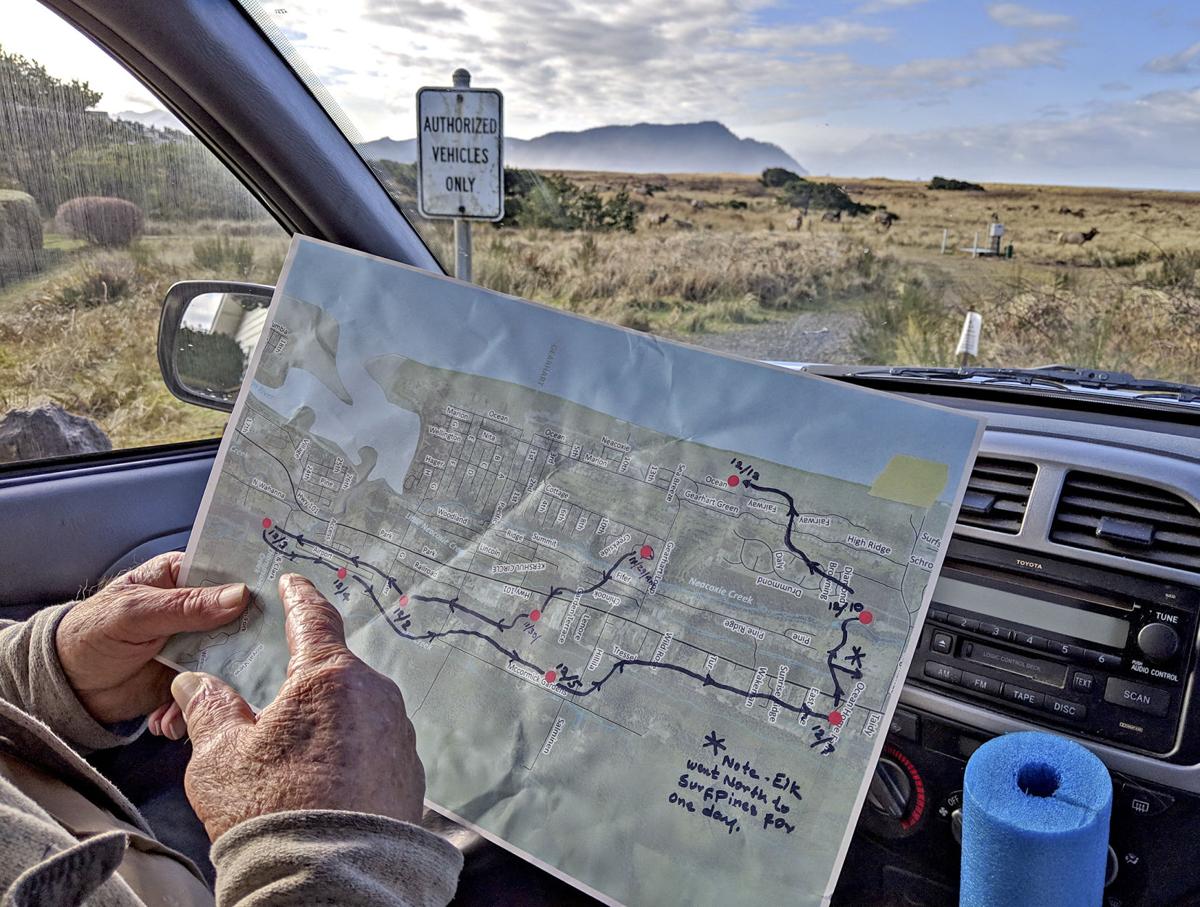 Photographer and naturalist Neil Maine watches a group of elk graze in the dunes near Gearhart with a map he uses to track their movements. 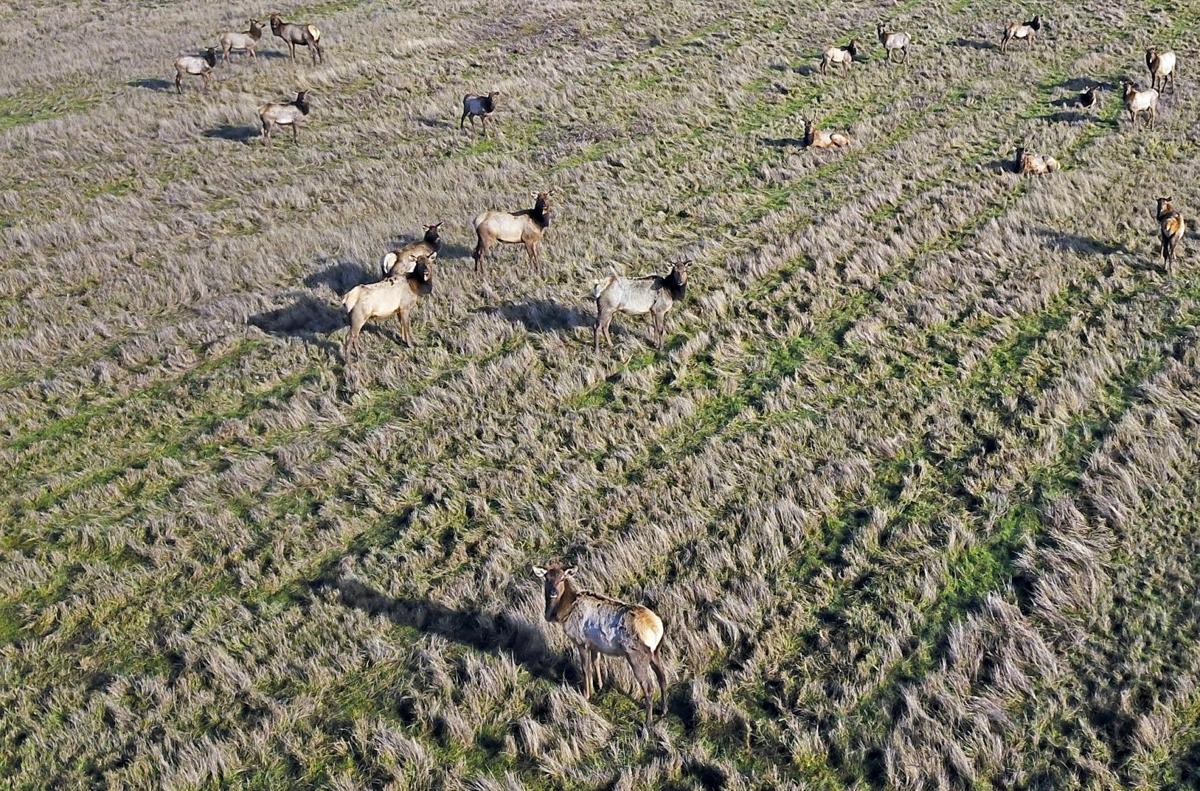 A herd of elk rests in a field near Warrenton.

There are several ways to track elk in Clatsop County, official and unofficial.

Combined, these efforts reveal just how much — and how little — North Coast residents know about animals they may see almost every day. But the answers, and questions, have gained a new urgency as city leaders struggle to address public safety and property damage tied to urban elk populations in Gearhart and Warrenton.

Unofficial efforts look like a Facebook group former Warrenton resident Lena Weil created in 2014 with traffic safety in mind. Though the group — Clatsop County Elk sightings! — has since morphed into more of a celebration of local elk, Weil believes it gives the community a sense of when elk are on the move or near roads.

But despite all the eyes focused on elk, many questions remain, and understanding the movements of the Clatsop Plains elk in particular presents a unique challenge.

Early one morning in late February, Carla Cole and Corinne Bird pointed their binoculars at a herd of elk grazing on a hill on the other side of Alternate U.S. Highway 101 Business, not far from the turn-off to Lewis and Clark National Historical Park, where Cole works as the natural resources project manager and Bird volunteers. They tallied the number of bulls, cows and calves they saw and recorded the herd’s location.

The information is just another data point to show where elk have been seen around the park over the last 10 years.

For now, the park employs two methods to track elk herd numbers and movements: driving surveys, done at sunrise every other month throughout the year on public roads around the park’s borders, and elk fecal pellet surveys, done on foot in park property by staff and volunteers willing to poke at poop and bushwhack through dense forest.

The driving surveys provide far less concrete data than the elk pellet surveys, but they are a low-effort way to gather a little more information. Park staff can say with confidence where they have seen — at least from the road — a lot of elk over the years, where they have seen only a few and where both sightings and abundance seem to be changing.

The national park’s tracking work is, in part, an effort to untangle anecdotal information and pin it to data. Because, as Cole said, “Everyone’s memory is faulty.”

The journals of the explorers Meriwether Lewis and William Clark provide a glimpse at what elk abundance around the modern-day national park looked like before European settlement. But since then, Warrenton has undergone rapid large-scale development in areas that were historically forests and fields.

Many of the conversations Cole hears now about elk in the area — and what constitutes normal herd sizes or travel patterns — seems to be set in a shorter, more recent time frame.

“What people are remembering is from their own lifetimes and that’s not necessarily the best indication of what ‘normal’ is,” she said. “There could be pretty wide fluctuations in both herd size and abundance and distribution and pattens of use across the landscape. Those are the questions we’re really just trying to get more information on.”

Park staff are in the process of refining the most recent years of driving and pellet survey data, and are interested to see what trends emerge when this data is contextualized within 10 years of information. A plan to fit up to six elk in the park with radio collars this year could reveal even more detailed information about how the animals use the park.

For now, Cole and Bird will keep driving.

Clatsop County’s herds are folded into a large group known as the Saddle Mountain unit. The Oregon Department of Fish and Wildlife manages many of the populations in the unit for hunting, keeping an eye on the ratio of bulls to cows and calves to cows.

Though biologists use helicopters — and have experimented with drones — to survey herds in some parts of the unit, driving is really the only way to survey the Clatsop Plains elk. These herds inhabit a mix of forested, agricultural and increasingly developed and urban lands crossed with public roads and divided by a busy highway.

“Most herds don’t freak out if you fly over them, but if they do, they run through fences or essentially stampede,” said Herman Biederbeck, district wildlife biologist. “And that’s the last thing we want to do in that area.”

Like the national park’s driving survey crews, state trackers are limited by what they can see from the road and in open areas. Then, of course, there is what they hear from people who live in Gearhart and Warrenton who deal with the Clatsop Plains elk regularly.

“We get reports of the size of the Gearhart elk herd and some people who don’t like the elk all that much have a tendency to give inflated numbers,” Biederbeck said.

He often relies on meticulous observers, like former biology teacher and nature photographer Neal Maine, to ground-truth the claims.

While there is pressure on local city leaders to address the elk herds, it does not affect Maine. After 30 years of teaching biology, he’s more interested in looking at all the variables and letting people decide for themselves.

For years, he’s kept an eye on the Gearhart elk and his efforts to track them fall somewhere in the middle between official and unofficial. He knows the herds’ usual routes, and believes the community could find ways to better predict when elk will pop up at places like the golf course and use this knowledge to plan ahead.

“They have patterns — they break the pattern all the time — but it’s reasonably predictable,” he said.

Warrenton and Gearhart are working with Oregon Solutions, a group based out of Portland State University’s National Policy Consensus Center, on how to best address the Clatsop Plains elk herds. Leaders are hoping for an official project designation for the work from Gov. Kate Brown.

Gearhart Mayor Matt Brown has indicated one of his primary concerns is public safety. To Maine, that’s something concrete that could be defined and addressed in a variety of ways right now — beyond the weathered temporary signs tacked to notice boards and posts around the dunes in Gearhart that warn people to stay away from elk during the rutting season or when calves are present.

The Clatsop County Elk sightings! Facebook group Weil started in 2014 boasts more than 500 members, a number that has skyrocketed suddenly several times over the years. The spikes appear to coincide with public discussions or media reports about local elk herds, Weil says.

Sometimes this fascination with elk leads to problems. Over the years, Maine has seen people sic their dogs on elk, or try to get selfies with them.

But elk are responding to specific things in their environment, solving problems, going to where there’s food and reacting when they feel threatened, Maine said. After years of observing both human and elk behavior, he believes the ones most able to change things in this equation are the humans.