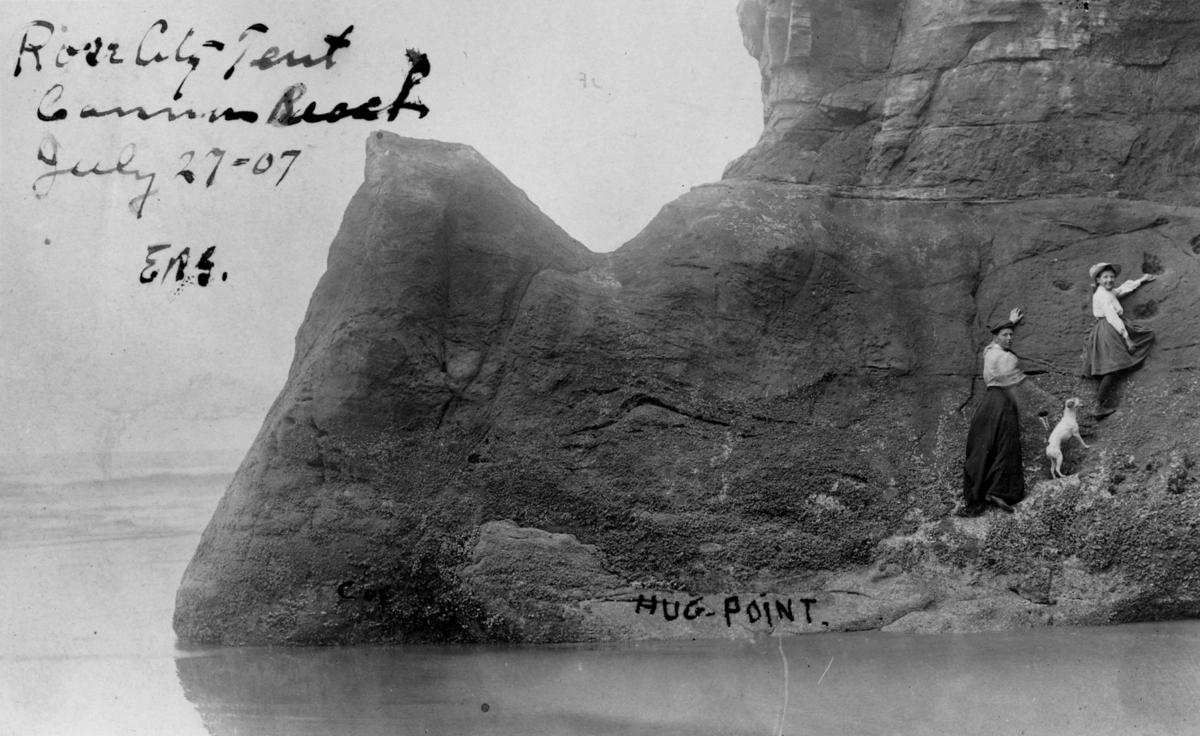 This photo was taken in 1907 of ladies “hugging” the hand-holds at Hug Point. 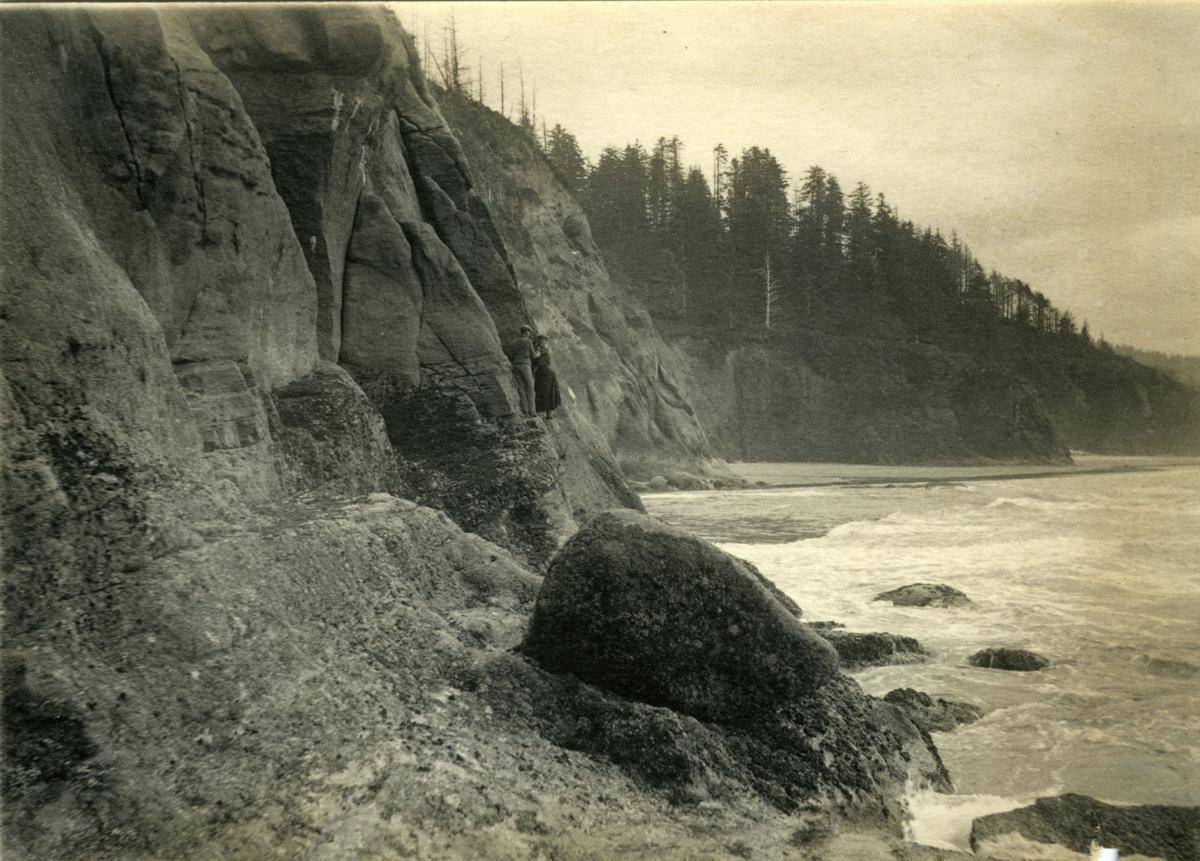 A picture of Hug Point before it was blasted in 1910. 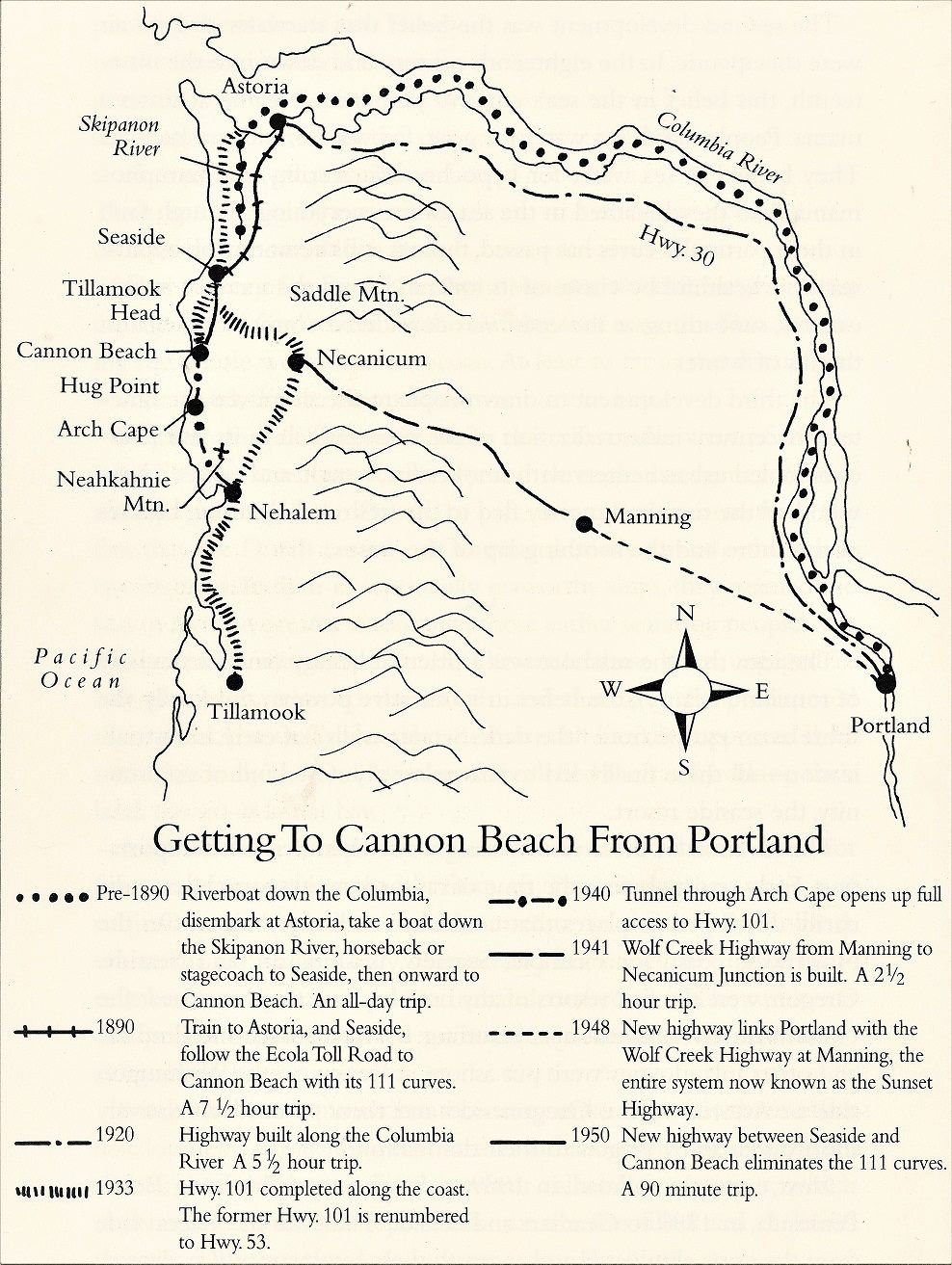 A map explaining how travel to Cannon Beach has changed over time. 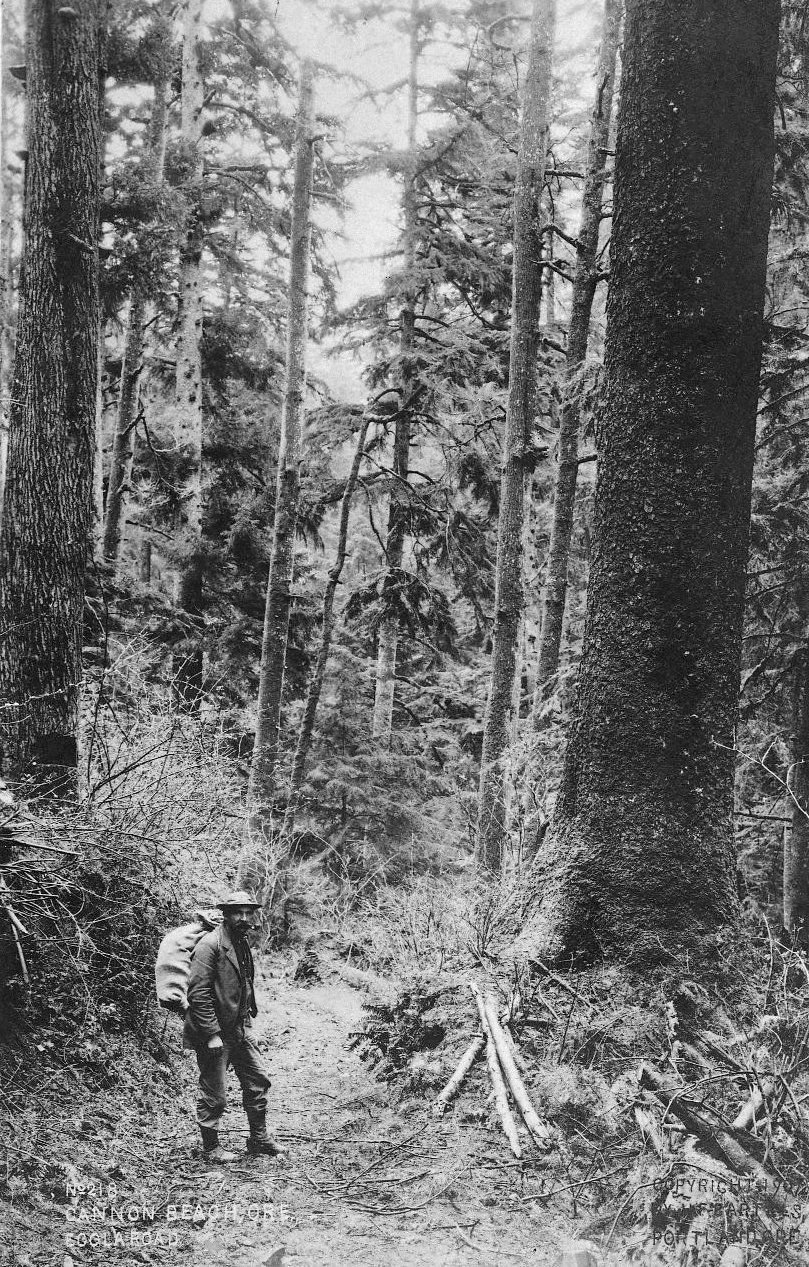 A picture of the road to Ecola. Cannon Beach was known as Ecola until 1922.

This photo was taken in 1907 of ladies “hugging” the hand-holds at Hug Point.

A picture of Hug Point before it was blasted in 1910.

A map explaining how travel to Cannon Beach has changed over time.

A picture of the road to Ecola. Cannon Beach was known as Ecola until 1922.

For those of us who live in Cannon Beach and the surrounding area, the trek to “the city” can seem exhausting. Highway 26 is a bumpy, winding, traffic-filled nightmare at the best of times, and in winter down right dangerous. We take for granted that this trip takes only a few hours when just over a hundred years ago, the journey was a long one, indeed.

In the early years of traveling to Cannon Beach the trek was a full-day journey that typically combined traveling by boat down the Columbia River from Portland, disembarking at Astoria and then taking another boat down the Skipanon River, horseback, or stage coach to Seaside – then onward to Cannon Beach. The first train to travel to Seaside arrived in May of 1898. This train was often referred to as the “Daddy Train.” This decreased travel time to Cannon Beach by several hours. Travelers would journey from Seaside by horse, stagecoach or by foot to Cannon Beach. Long-time resident and author of “Comin’ in Over the Rock,” Peter Lindsey compares the journey from Seaside to Cannon Beach as “the Bataan Death March.” The road, barely more than a trail, was a muddy mess for most of the year. At one point the road to Cannon Beach was purported to have a stomach-churning 111 turns.

By 1920 a highway was constructed along the Columbia River and decreased the travel to Cannon Beach to just over five hours. The road still consisted of a dizzying number of curves and was mainly mud and gravel. Wolf Creek Highway from Manning to the Necanicum Junction was completed in 1941, this is now known as Highway 26. This decreased travel time to less than three hours. New links to Portland were completed in 1948 and the road was dedicated at the Sunset Highway. It wasn’t until 1950 that a new road was constructed to Cannon Beach from Seaside that eliminated the 111 curves.

If you wondering about traveling south from Cannon Beach, it wasn’t the leisurely journey that we enjoy today. Highway 101 did not exist prior to 1932. The journey south from Cannon Beach was either along the beach or by a mountain trail. Mary Gerritse was the local mail carrier from 1897 to 1902. Both trails had their own dangers; the mountain trail was narrow and had steep drop offs, while the beach road was only accessible at extreme low tides. To cross the point between Arcadia and Hug Point beaches, as they are now known, one had to “hug” the rock. In 1893, hand and footholds were dug out of the sandstone around the face of point, allowing a person to climb along the shallow ledge, hugging the rock. This was how Hug Point became known as Hug Point. Gerritse nearly drowned and lost her prized horse Prince attempting to cross this area at high tide. The way was treacherous and, at times, inaccessible.

In 1910 Hug Point was blasted with dynamite to make a road that would be accessible for longer stretches of time between high and low tide. Once the road was completed stagecoaches were able to use it to bypass the cliffs off of the coast by hugging the edge of the cliff and escaping the waves of the Pacific Ocean. This route was called the Oregon Coast Highway and is now considered part of the Oregon Coast Trail.

To learn more visit the Cannon Beach History Center and Museum and check out our new exhibit “The Long Road Home.” The museum is open from 11 a.m. until 4 p.m. Wednesday through Monday, closed on Tuesday.