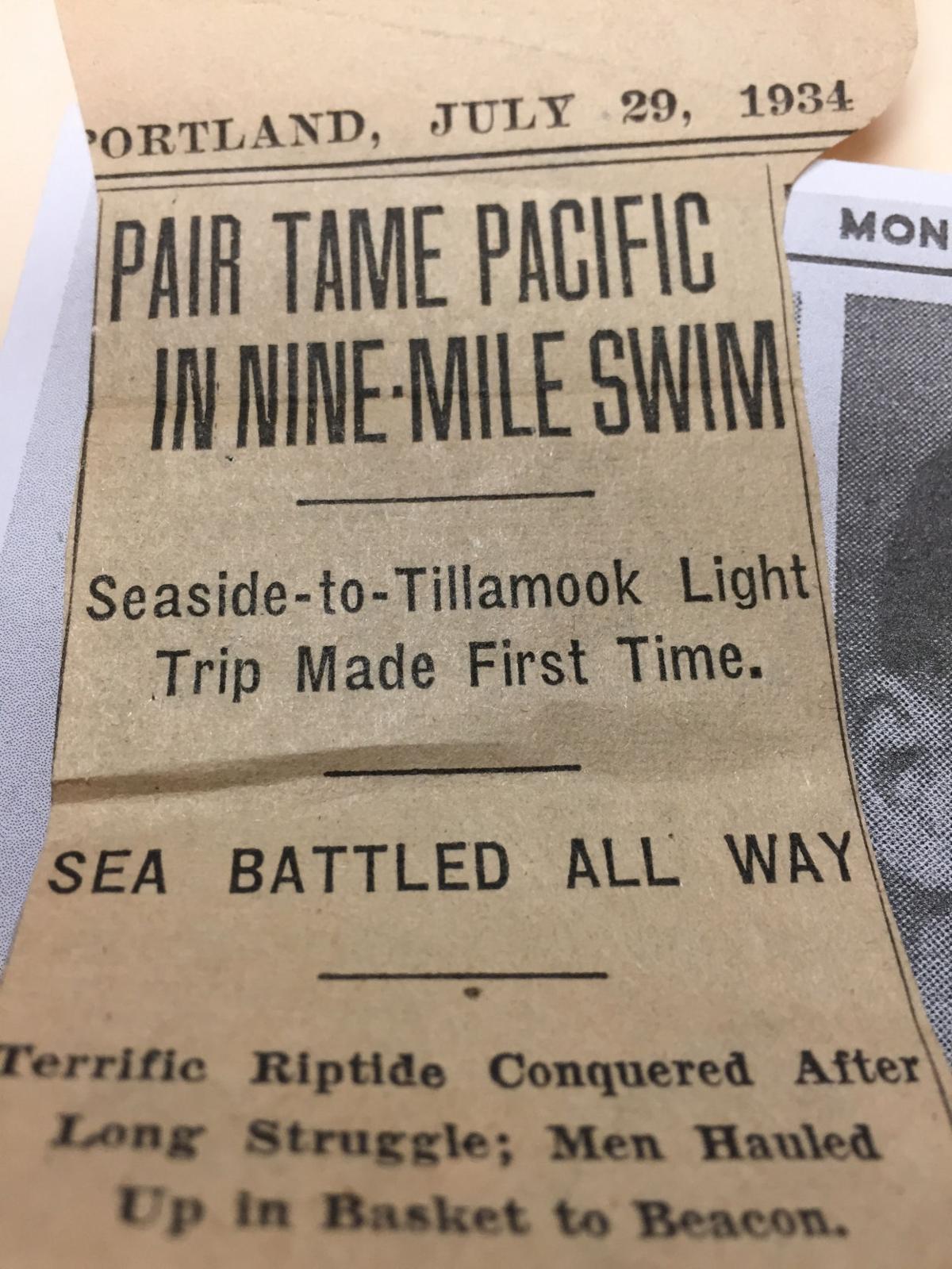 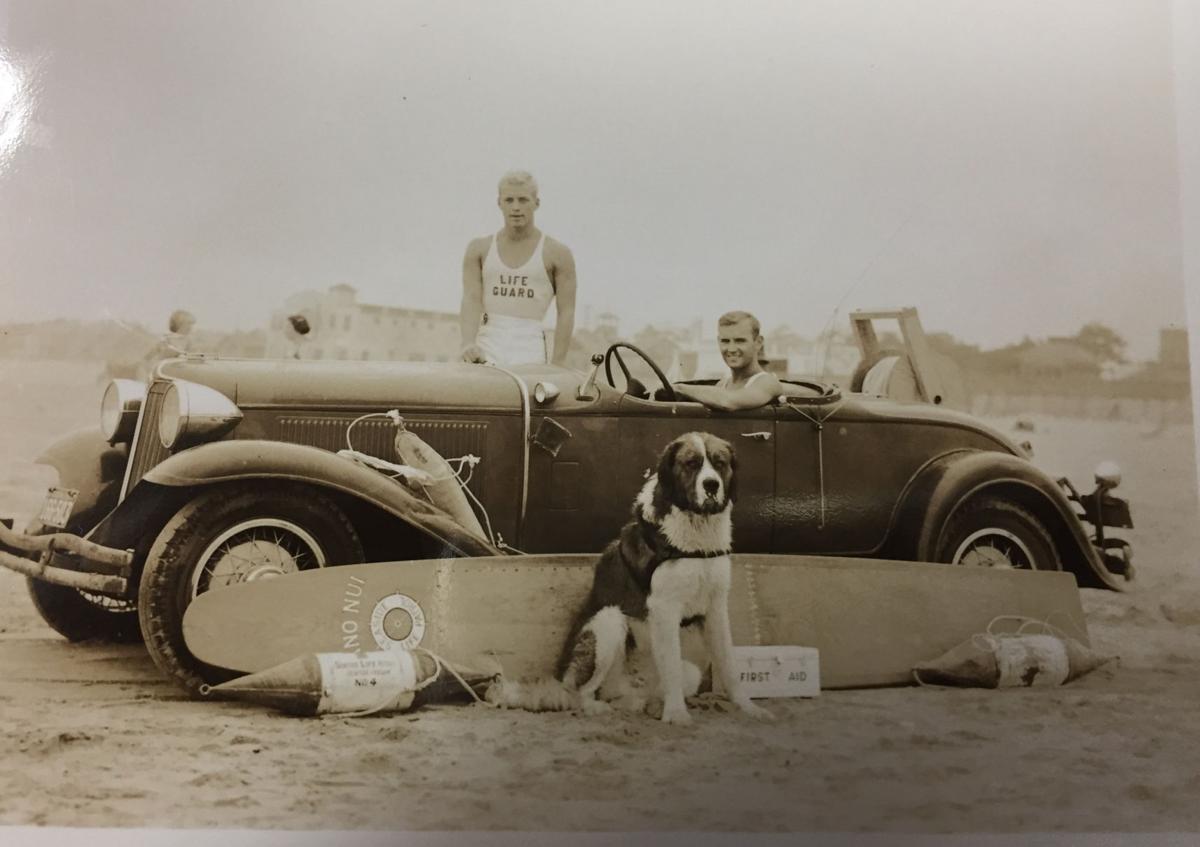 Seaside lifeguards were assisted by a St. Bernard in the 1930s. 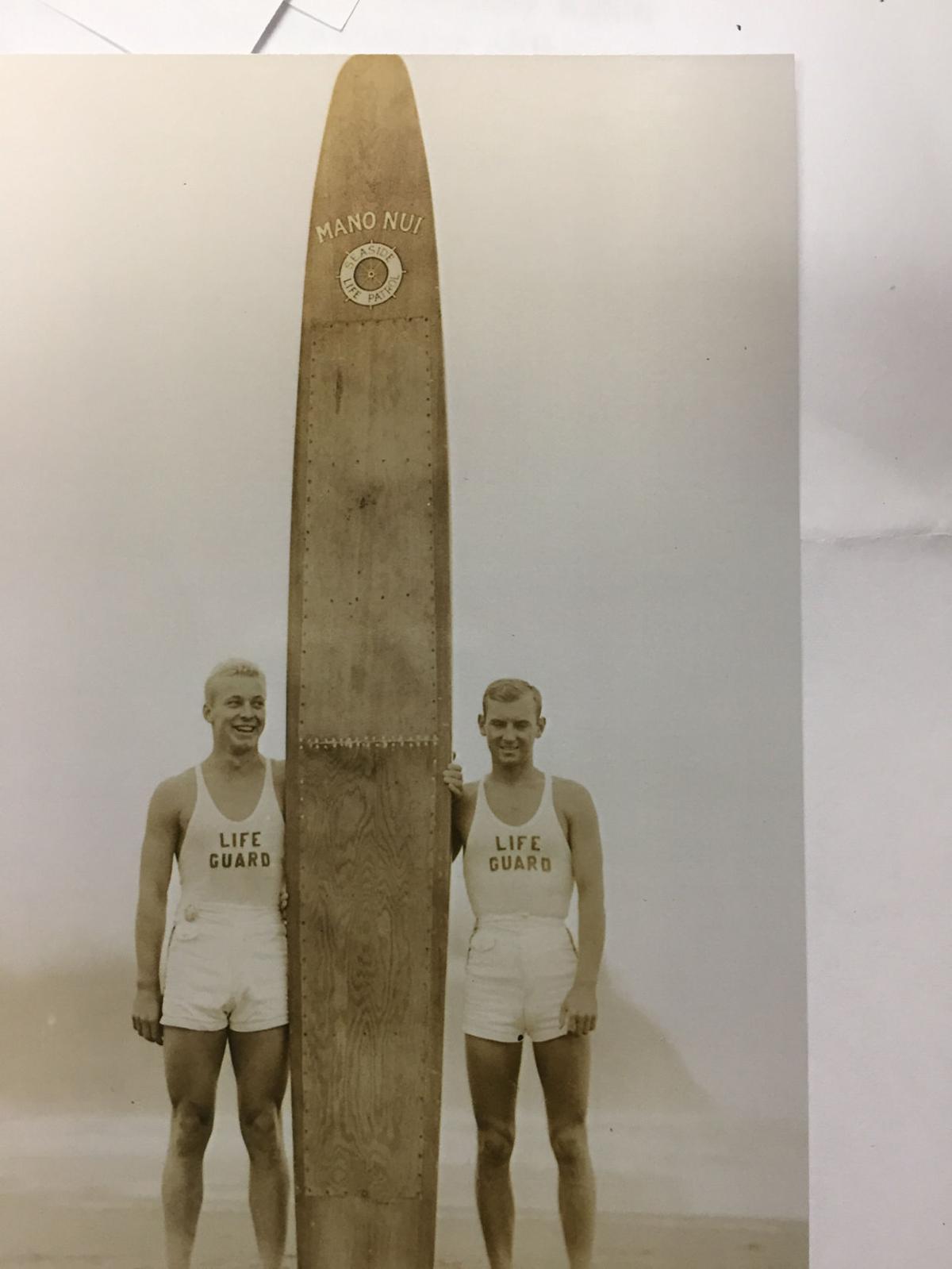 Jim and Chuck Reed and their surfboard, long before the surfing craze of the 1950s and '60s. 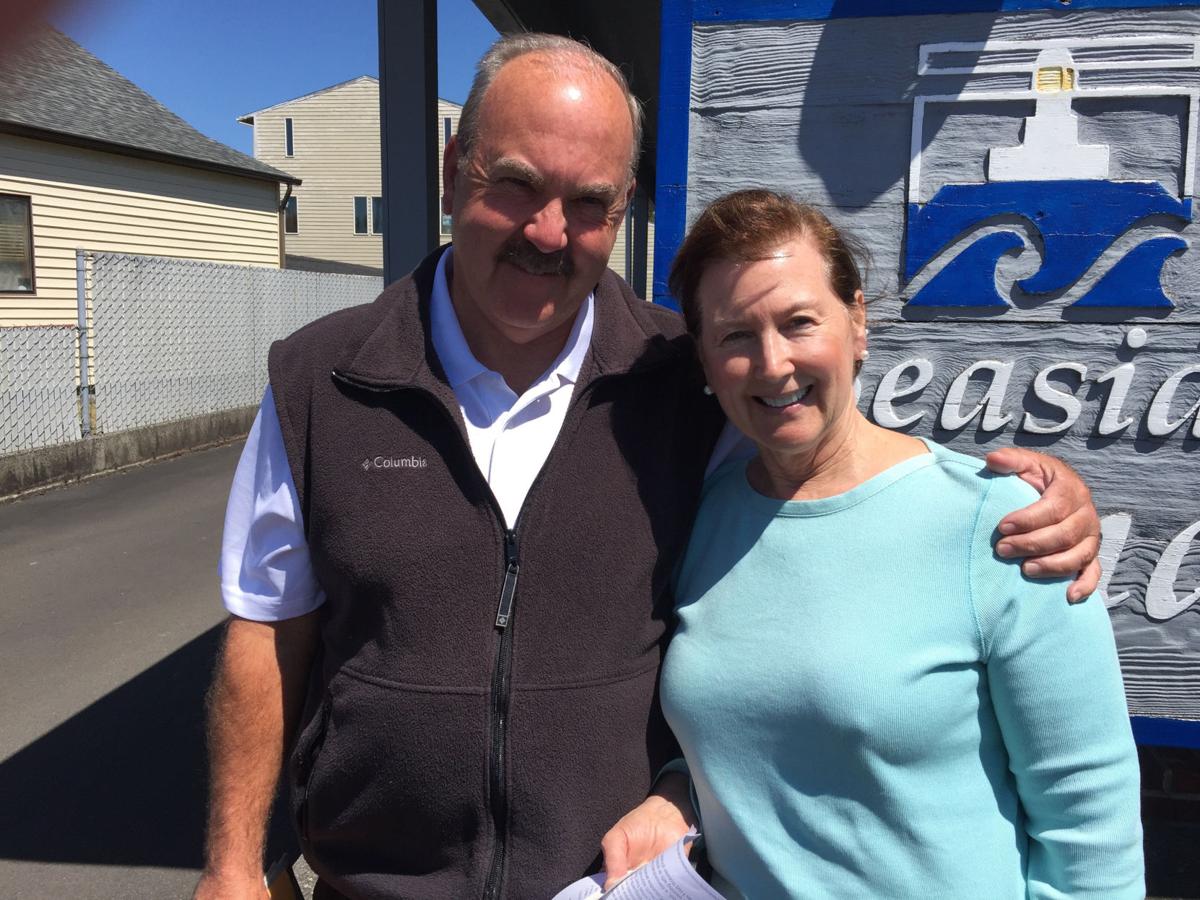 Jim Reed and Melinda Masters, whose father was Chuck Reed, at the Signal office. Jim was named after his uncle, James Reed, who died during World War II. 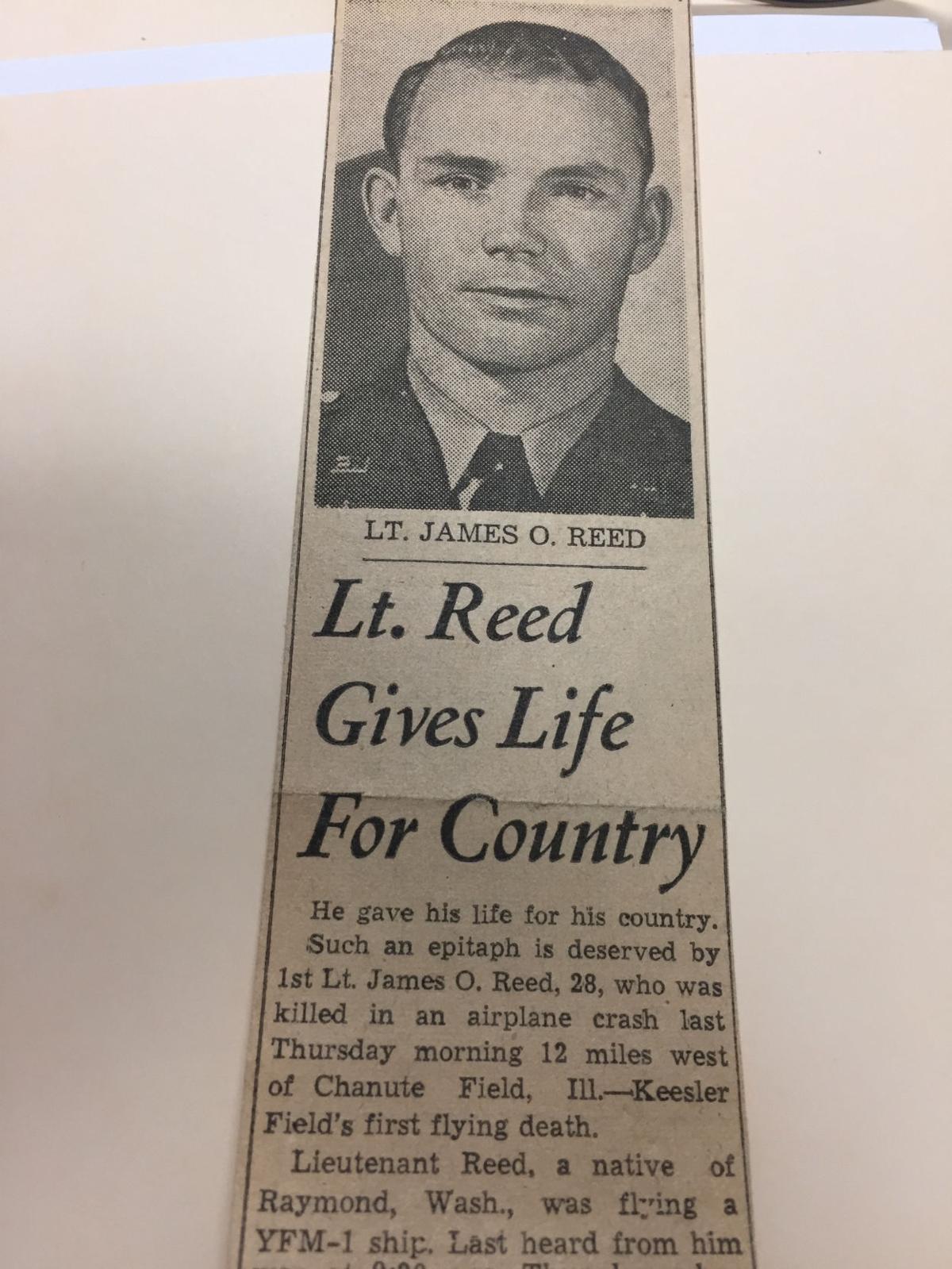 Lt. James Reed was killed in 1942 fighting for his country. His nephew, Jim, and niece, Melissa Masters, hope to revive the memory of his achievements. 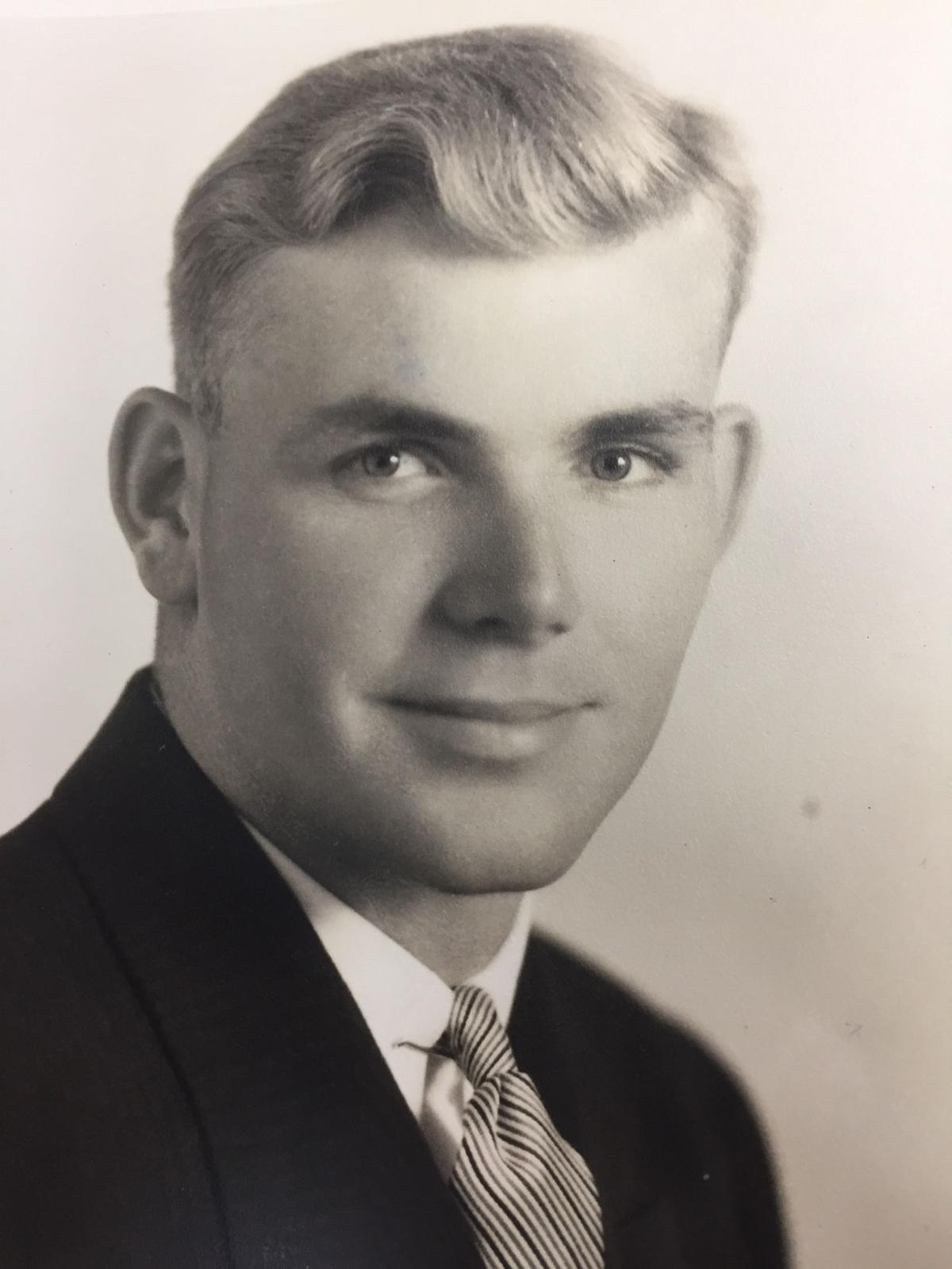 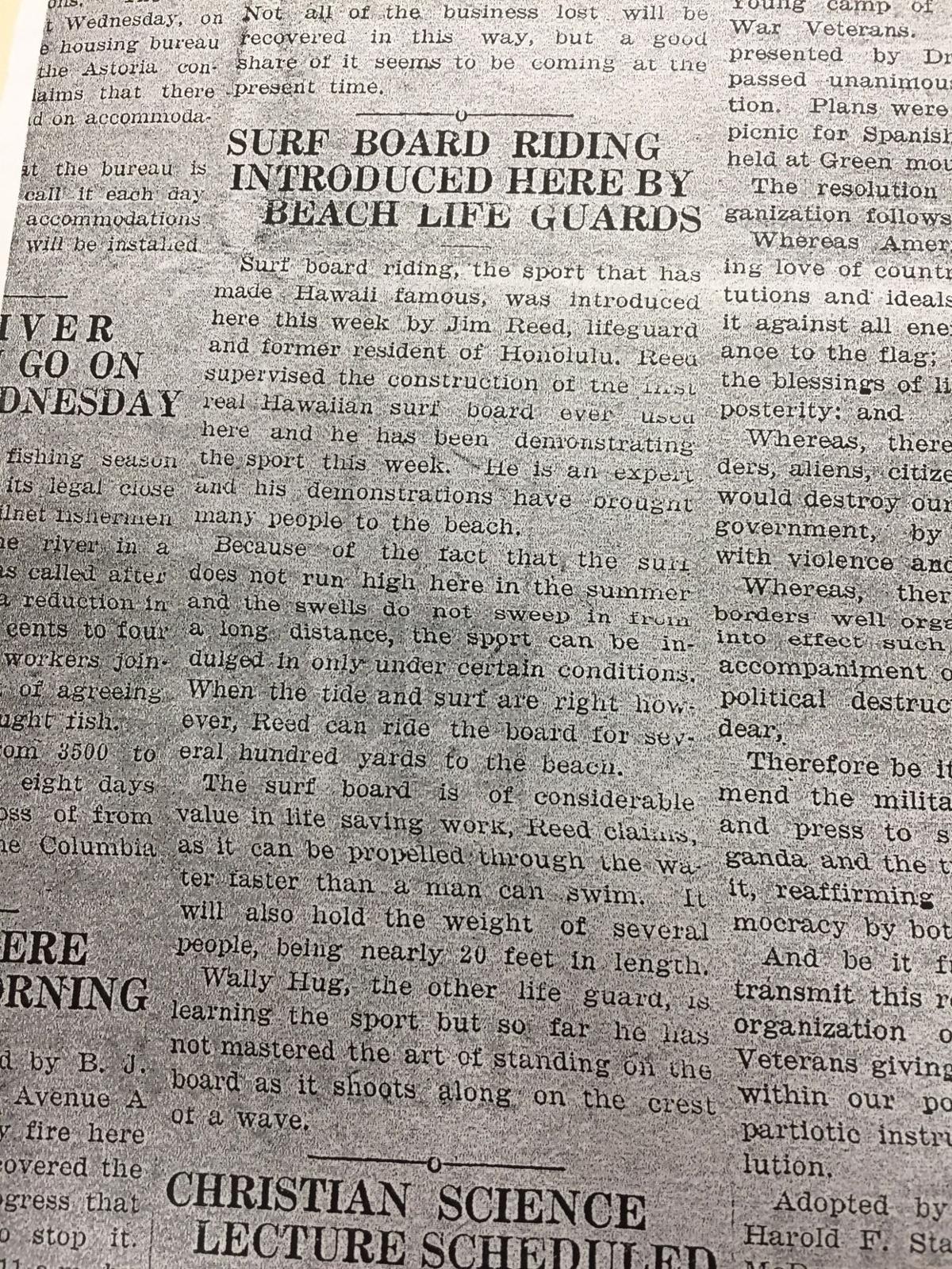 The Reeds were recognized in the 1930s for introducing “surf board riding” to Oregon.

Seaside lifeguards were assisted by a St. Bernard in the 1930s.

Jim and Chuck Reed and their surfboard, long before the surfing craze of the 1950s and '60s.

Jim Reed and Melinda Masters, whose father was Chuck Reed, at the Signal office. Jim was named after his uncle, James Reed, who died during World War II.

Lt. James Reed was killed in 1942 fighting for his country. His nephew, Jim, and niece, Melissa Masters, hope to revive the memory of his achievements.

The Reeds were recognized in the 1930s for introducing “surf board riding” to Oregon.

‘Oregon surfing began in 1962,” states a recent book on the topic.

Family members of brothers James and Chuck Reed want to let it be known that their relatives staked out Seaside long before legends like Dana Williams and Dick Wald surfed the Point in the 1960s.

“Jim supervised the construction of the first real Hawaiian surfboard ever used in Oregon,” Melinda Masters, his niece, said. “He introduced surfing to Seaside and explained to the public how the surfboard is considerable value to lifesaving work.

“These were the original ‘Beach Boys,’” Masters’ brother, also named Jim Reed, said. “People here did not know what a surfboard was.”

All this may not even match Jim Reed’s greatest athletic achievement: a 9-mile swim from Seaside to Tillamook Lighthouse in July 1934 — Terrible Tilly, aka “The Killer Lighthouse.”

Masters and Reed came to Seaside this summer to celebrate the lives of two men, largely forgotten, for their incredible string of achievements: as swimmers, surfers, lifeguards and ultimately, in the case of James Reed, in service to their country.

Charles W. Reed Jr. and James Reed grew up in Hawaii in the early 20th century after Charles Reed Sr., an accountant, and the family moved from the Northwest.

The boys grew up on Waikiki Beach, where the sport of he’e nalu — “wave sliding” — was integrated into the culture.

While in Hawaii, the Reeds “surfed at the knee” of Duke Kahanamoku, the famous competition swimmer and founder of modern surfing.

The Reeds were younger, but “they were on the same beach,” Masters said. “I’m sure they met up.”

Their early experience riding longboards stayed with them after their return to the mainland to study at the University of Oregon, where both were recruited for the swim team, known as the Webfoots.

Jim Reed was a individual medley and freestyle specialist who helped lead the team to the 1936 Pacific Coast championship.

Together the brothers would help forge a program that remained unbeaten in dual-meet competitions during their Oregon tenure under head coach Mike Hoyman, winning three straight Pacific Coast Conference Northern Division championships from 1935 through 1937.

Along with other University of Oregon swimmers, the Reeds lifeguarded in Seaside over summers.

The Reed brothers first considered bringing boards to the coast as a way to aid people in distress, Reed said.

If they had longboards like they grew up with in Hawaii, the brothers reasoned, they could reach struggling swimmers more quickly. And once they reached the victims, they could use the board to hold onto for the return to shore.

“Surf board riding introduced here by beach life guards,” a Seaside Signal headline announced. “Reed supervised the construction of the first real Hawaiian surf board ever used here … When the tide and surf are right, Reed can ride the board for several hundred yards to the beach.”

Swimmer Julie Havelka of Eugene made headlines in July when she swam the mouth of the Columbia.

She was following in a long tradition.

Long-distance swims were popularized in the 1920s by English Channel swims and silent star Johnny Weissmuller, better known as the actor who played “Tarzan.”

Jim Reed undertook the crossing when he entered the first Columbia River swim as a contestant, a feature of the 1934 Astoria Regatta. The swim was a 4 1/2-mile stretch from Megler, Washington, on the north bank to Astoria on the south.

Jim won the race in a time of 2 hours, 34 minutes. His performance won so much approval, wrote the Astorian’s Vera Gault in 2011, that the race was publicized as a race called the “trans-Columbia amateur marathon swim.”

That feat was only surpassed by Jim Reed’s 9-mile swim from Seaside to the Tillamook Lighthouse rock in the Pacific Ocean on July 20, 1934, what the Signal’s Fulton H. Travis described as “9 miles of cold ocean and treacherous currents,” battling the sea all the way.

Accompanied by U of O freestyle swimmer Wally Hug, Jim Reed and Hug lubricated themselves with axle grease at 5:30 a.m., launched by a small pilot boat captained by one Bill Hoops.

By 8 a.m., “the stroke of the swimmers has slowed perceptibly,” wrote Travis, who accompanied Hoops in the skiff. “The strain is terrific. Their faces have gone dead white beneath their tans and the lines of their faces have drawn tense. Their lips are black with cold.”

Hug complained of seasickness and leaned against the boat for a sip of beef broth before resuming his swim.

The pilot boat rocked “drunkenly,” according to the report, as Hoops called out “Riptide!”

Panting and nearly exhausted, the swimmers rolled onto their backs when the riptide crossed.

As the lighthouse grew in size, the waves “grow bigger with every passing minute,” finally close enough for Reed and Hug to board the skiff and tumble into a swinging basket and hauled to the beacon. “Perfect manipulation of the oars is necessary to keep from shipping a wave,” reported the Signal.

At 9:25 a.m., the swimmers reached their destination.

Their final time was registered in the lighthouse log dated July 20, 1934: “The first men to make the swim from Seaside to the Tillamook Lighthouse: 3 hours, 45 minutes.”

They were treated to a hot bath and a breakfast of “fried eggs, slabs of ham, seagoing coffee, fresh bread baked by one of the crew,” and canned fruit for dessert.

Jim Reed died as he lived, Masters said, as a hero protecting others, and giving of himself.

A test pilot, Jim’s plane went down in 1942. Even in death he was a hero, she said. Before the crash, he ordered his crew to bail out. Once his crew had safely left the aircraft, Jim remained with his craft in an unsuccessful attempt to land the plane.

“My dad and my uncle were only a year apart,” Masters said. “When we lost him in the war, it was very traumatic for my father. It was hard for him to talk about. My grandmother was never the same.”

Chuck Reed began a career with the phone company in 1940, but “kept coming back” to Seaside, Masters said.

As a lifeguard in 1942, Chuck Reed fought a riptide that carried seven swimmers to sea. Reed, with three of the distressed swimmers on his shoulders, battled the current and the breakers “for better than a half an hour,” the Oregon Journal reported.

Reed managed to get the three to a buoy, “then, almost exhausted,” he swam to the shore for help.

Two of the seven swimmers caught in the undertow died as hundreds watched the dramatic rescue at the Turnaround.

Surfing on the North Coast languished for many years after the Reeds first brought the Hawaiian longboard, the younger Jim Reed said.

It wasn’t until the popularization of the wetsuit — developed by Jack O’Neill in the 1950s — that the sport came northward and modern surfing took hold in Seaside.

In 2015, James Reed was named into the University of Oregon sports Hall of Fame. Reed “helped attract national acclaim on Oregon’s swimming program unlike any other,” the athletic department wrote at the time of presentation.

What inspired this retelling was a box received by Masters by the war widow of Jim Reed. She had remarried, but the impact of her first husband was so powerful she and her second husband named their daughter Reed in his honor. The contents of the box proved so compelling Masters later sought to revive the memories of her father and uncle.

“I’m the one that went through this box that was sent to me by the widow of Jim Reed,” Masters said.

The American flag that draped his coffin was in the personal collection.

“I almost didn’t want to touch it, because it was so emotional,” she said. “It was just amazing to find out who he was.”