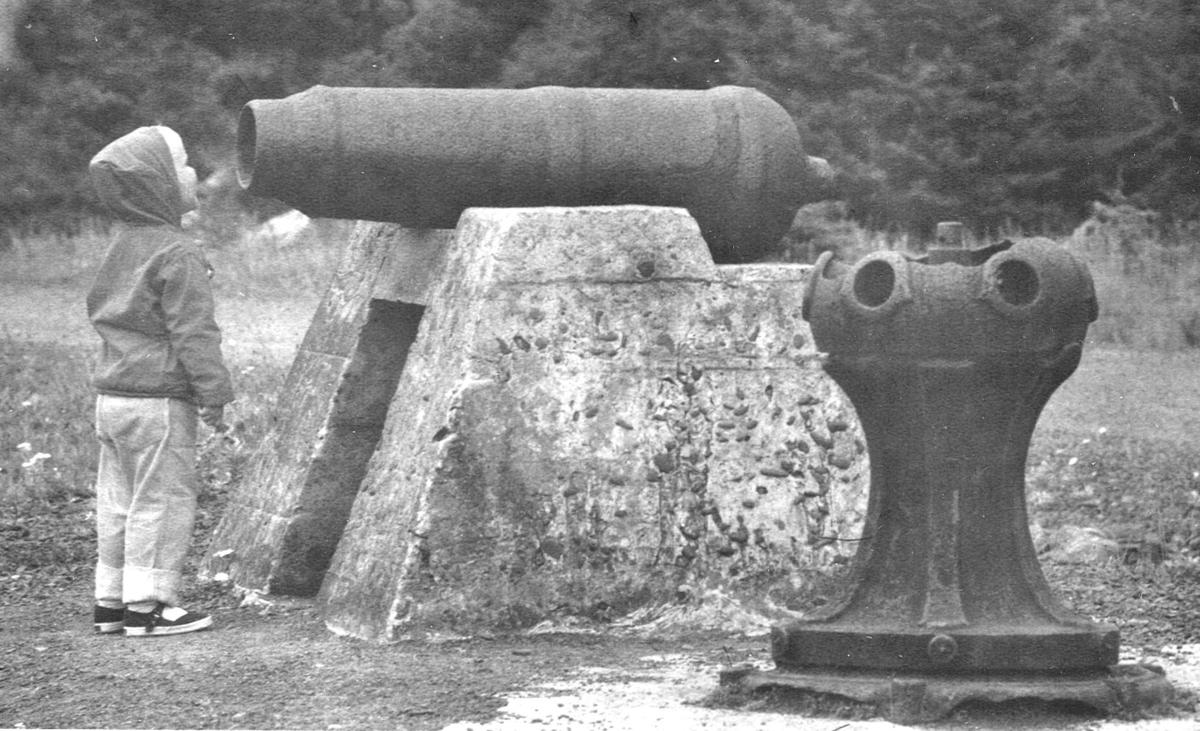 A child peeks into the cannon; the photo was taken in 1957. Several people have claimed to be the child, but who it is remains uncertain. 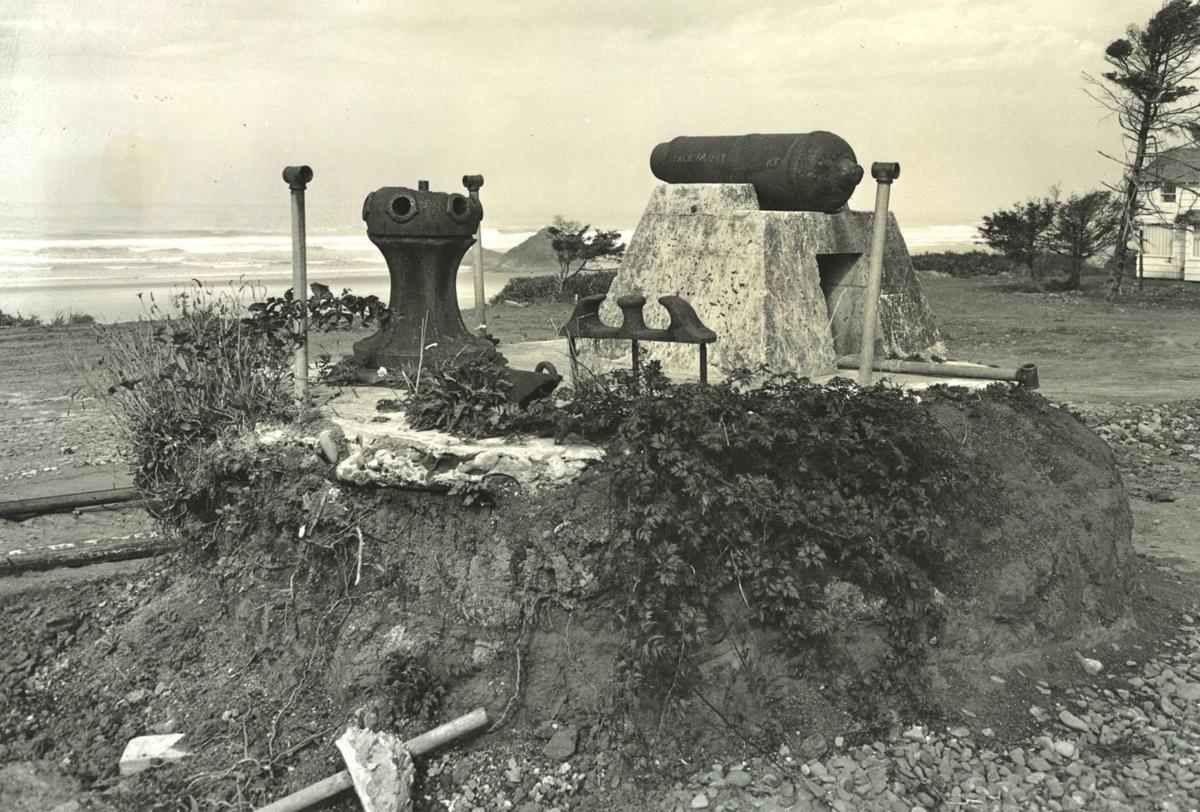 The cannon, capstan, and other artifacts were removed from the shore, and possibly the USS Shark. Many of these artifacts were stolen or damaged in the late 1990s.

A child peeks into the cannon; the photo was taken in 1957. Several people have claimed to be the child, but who it is remains uncertain.

The cannon, capstan, and other artifacts were removed from the shore, and possibly the USS Shark. Many of these artifacts were stolen or damaged in the late 1990s.

Ever wonder how Cannon Beach got its name? The story is as confusing as most historical rumor-wrapped tales, but it is still pretty darn good.

A land parcel at Elk Creek grew to be the town known as “Eola,” which eventually became Cannon Beach. But that’s not really the story we are going to focus on.

The focus of this story is of the original cannon that was discovered along the coastline in 1898. This carronade initially washed up in Arch Cape in 1846. Where did it come from? Well, the very first cannon to be discovered in our area was torn, along with a portion of the decking, from the USS Shark.

The Shark, a U.S. naval schooner, wrecked on the Columbia River bar on Sept. 10, 1846. During the wreck, Lt. Neil Howison ordered three masts chopped down and all 12 of the ship’s cannons jettisoned in an effort to help lift the ship off of Clatsop spit. Before the ship’s crew could take action, the ship began to break apart, and pieces of the wreckage were scattered all over the bar.

A piece of that wreckage with several cannons attached washed ashore in what is now Arch Cape. Midshipman T.J. Simes was sent to visit the location, and his report indicates that he was successful in “getting one cannon above the high water mark,” but high tides forced him to leave the two others buried (You might remember the exciting story of two cannons being discovered in Arch Cape in 2008.)

In a twist of events, the cannon that was retrieved was lost again. However, tales of the cannon swirled. In December 1863, mail carrier John Hobson reported seeing a cannon in Arch Cape Creek (also known as Shark Creek). Soon after, however, the cannon became lost when tides buried it in the sand. Rumors of the peek-a-boo sightings of the cannon continued to spread.

On May 29, 1891, early coastal settler James P. Austin established the first post office at Arch Cape and named the area “Cannon Beach,” which reflected his hope of finding the lost cannon.

Austin knew that the cannon was supposedly buried in a creek bed nearby, and he reportedly spent much time and money on his endeavor to find the lost artifact, no matter how unlikely his discovery might have been. He searched unsuccessfully for the cannon until his death in 1894.

Four years after Austin’s death, mail carrier George Luce spotted the cannon in the waters of Arch Cape Creek. He ran to tell Austin’s wife, and neighbors John and Mary Gerittse lent their team of horses to pull the heavy item out of the water.

Austin’s wife had the cannon placed in front of the post office in honor of her husband, and it was housed there (I believe) until 1945.

In 1945, Mel Goodin purchased and platted the land known as Cannon View Park. To make way for home sites, the cannon needed to be moved. George Van Vleet, of Van Vleet Logging, donated one acre to the state on which to place the cannon. The Oregon State Department of Highways prepared a site on the east side of U.S. Highway 101. According to an article in The Daily Astorian, Goodin, who was the owner of the cannon, donated it to the public. The cannon and accompanying artifacts then were moved to the new location. How Goodin became the owner of the cannon, I’m not sure.

This is where the story gets a little tense and even political. I was told that an unidentified individual was stealing artifacts from around the cannon. At first, a chain, or two went missing, and then other pieces, until, finally, a portion of the cannon was “cut off.”

According to a story reported by The Daily Astorian on April 12, 1989, the cannon and capstan had been repeatedly vandalized. It was because of this vandalism that the Clatsop County Historical Society and the Heritage Museum in Astoria chose to remove the artifact and put it on display in a safe and secure environment. On April 13, 1989, the original cannon and capstan were moved from the highway site to the Heritage Museum in Astoria.

As part of an agreement with the Arch Cape Community Club Committee, the Clatsop County Historical Society placed an exact replica where the original cannon once stood.

What happened to the original cannon? Well, after some years, the cannon and capstan were given to the fully established Cannon Beach Historical Society with the express understanding that the artifact would be stored with the highest museum standards. The dates are questionable, but it looks as though the cannon arrived at the Cannon Beach History Center & Museum in the mid-2000s.

In 2012, the original cannon and capstan were sent to Texas A&M to undergo a conservation process to stop the oxidation that had occurred during the time they were exposed to the elements. The cannon that Cannon Beach is named for will once more go on display at the beginning of next year at the Cannon Beach History Center & Museum. Though the story of the cannon is still a sore spot for some, I believe that it is one of the wonders of our coast. From ship’s hull to town icon and everything in between, that little 1 ton cannon has had quite a journey.

Elaine Murdy Trucke is executive director of the Cannon Beach History Center & Museum. Her column appears once a month.