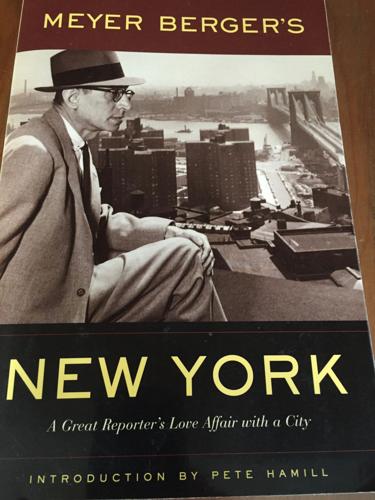 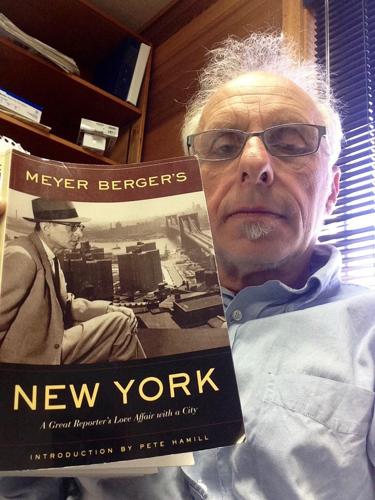 Meyer Berger never took a selfie. His book is a glimpse at New York City as it once was.

Meyer Berger never took a selfie. His book is a glimpse at New York City as it once was.

A haircut from a head hunter?

Meyer Berger expresses New York City as well as any journalist I’ve read on the topic. And there are a lot of distinguished ones, from Walt Whitman to Jimmy Breslin, Pete Hamill and Tom Wolfe.

What I like best about Berger — bylined Meyer, called Mike — is his combination of high- and low-brow, society’s upper edge and the people who stoked their furnaces. Berger presents spry and poetic characters and undomesticated scenes from the microcosm of mid-1950s Manhattan in “New York: A Great Reporter’s Love Affair with a City,” from Fordham University Press.

Berger, a grammar-school dropout who wrote the “About New York” column for The New York Times, bridged that gap.

“Berger brought to spotlight many of those New Yorkers who usually exist on the journalistic margins,” Hamill writes in the introduction. “They have neither fame nor notoriety. They never hit game-winning home runs and do not murder their spouses. ... And they know things. Often, they know amazing things.”

Berger, who earned a Purple Heart in World War II, won the Pulitzer Prize in 1950 for his account of the murder of 13 people by a disturbed war veteran in Camden, New Jersey.

In this collection of columns from 1953 to 1959, Berger describes the city’s civil service examiners who prepare tests for 2,132 different civil service jobs, mark their papers and grade them.

He tracks down the bus builders — Overseas Equipment Co. — who built buses shipped to Saudi Arabia to take pilgrims to Mecca. Each bus was a different color, Berger writes, except green, which, “it seems is sacred to Mohammed.”

There were no marriage licenses in New York City before 1908, Berger writes. Up to then, ministers, magistrates, sea captains, aldermen or “whoever” tied nuptial knots and sent a record to the Health Department.

Berger was the only New York City Yankee to chronicle the cemetery for Confederate soldiers in the borough of Queens, where 460 Southern Civil War dead were buried.

In his columns you can read of the between 600 and 800 Mohawk Indians who worked on bridges and skyscraper construction.

Berger writes of the tailor who dressed the Vanderbilts, and an animal called “the soft-eyed Panamanian oligo, kin to the kinkajou.”

The last trolley car was hauled out of the city by highway trailer-truck Nov. 3, 1958, he reports.

Berger’s columns consider fires in mailboxes and penetrate the secret society of orchid breeders in Manhattan.

We read about the “grim and fabulously wealthy real estate operator who kept his six sisters imprisoned in their mansion.” In later years, two of those sisters sometimes appeared in the neighborhood dressed in “black bombazine.”

In one column, Berger joined 1,200 Scottish gentlemen at the Waldorf-Astoria Hotel sitting down to “cock-a-leekie, to haggis and to salmon.”

On April 20, 1955, he wrote about “grating anglers,” treasure hunters who dangled rope and wire for coins underneath the sidewalks. “They’re inclined, almost unanimously, to be on the misanthropic side,” Berger comments.

Then there’s Allan Leonard Rock, the ad man who maintained the archives of the hunter and trapper Pawnee Bill, of Pawnee Bill and the Buffalo Bill Wild West Show.

Joe A. Munang was a Dusun tribesman from British North Borneo who ran a little barbershop opposite St. John’s Cathedral. “There’s something odd about this because Joe is descended from North Borneo head hunters,” Berger writes.

I laughed out loud reading about the “mostly retired businessmen from Park and Fifth avenues who keep Joe, the Central Park Zoo’s chimpanzee, in cigars.”

“They unselfishly give him their brand,” Berger adds. “They rarely pass him a stinker.”

And a newspaper writer might try, but he may never be able to write a lead like this one: “You come across some odd collections, but you’re not apt to match Miss Delphine Binger’s collection of 500,000 chicken, turkey and goose wishbones — 20 years accumulation. She only has room for only a few thousand in her two-room flat at 145 West 96th Street. Her aunts and other kin store the rest for her in trunks.”

Letter: Senate Republicans and Independents call for audit of Department of Environmental Quality

Submit a Letter to the Editor