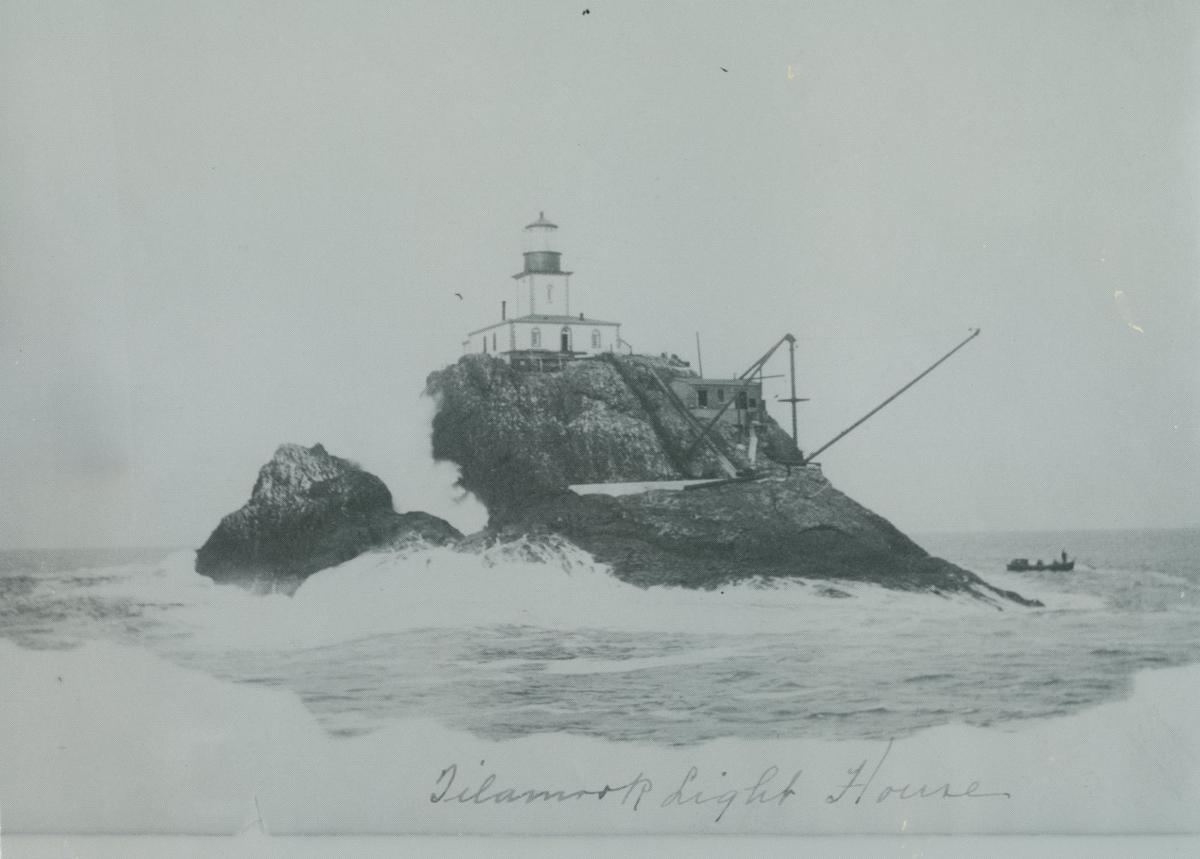 A skiff makes its way through the treacherous waters to Terrible Tilly.# 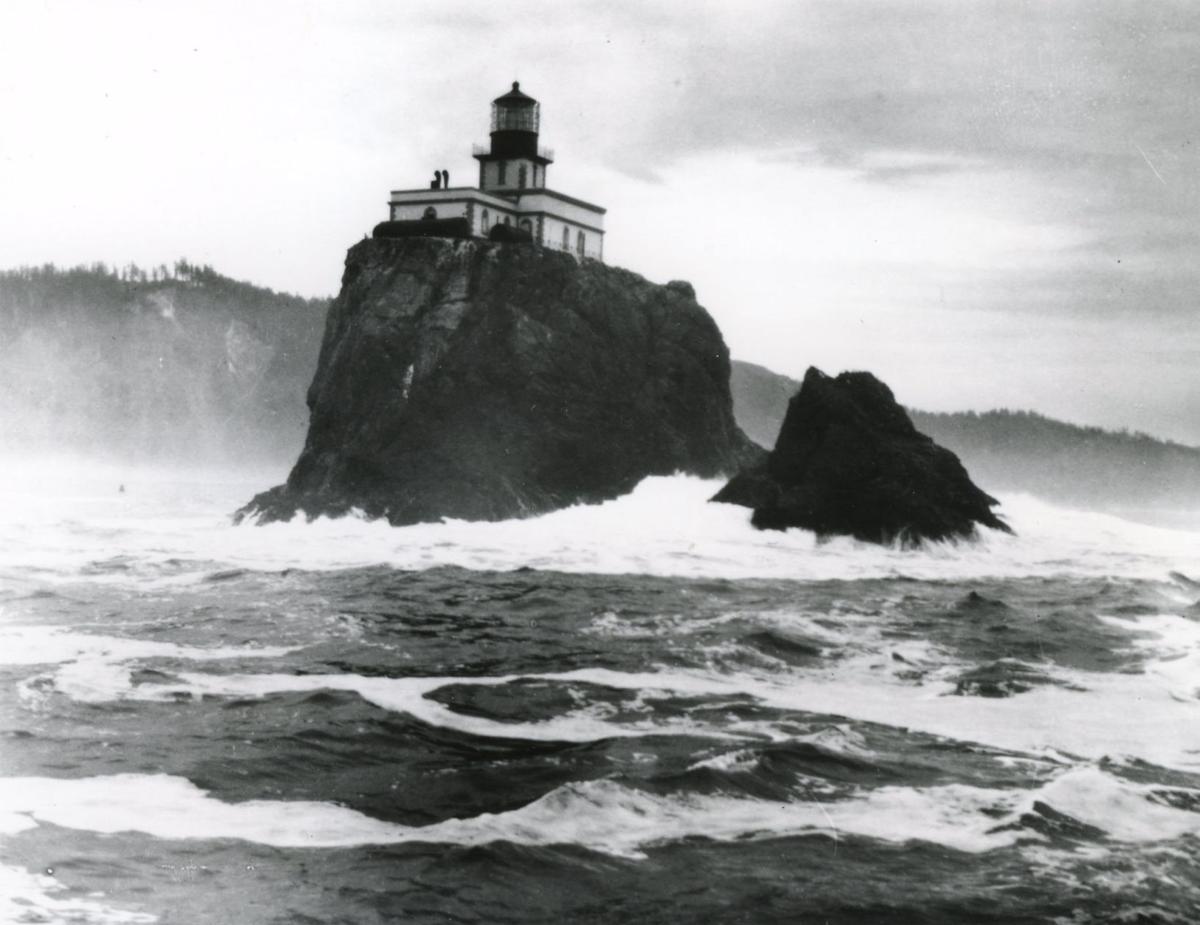 Terrible Tilly as seen from the northwest angle. #

A skiff makes its way through the treacherous waters to Terrible Tilly.#

Terrible Tilly as seen from the northwest angle. #

It was eight o’clock, Jan. 3, 1881.  The New Year had come and gone, but construction of the Tillamook Rock lighthouse carried on. The men had been at it for 525 days, living in canvas A-tents fastened through ring-bolts embedded right into the basalt of Tillamook Rock. This was necessary to keep their makeshift homes from being blown away by competing winds that often reached over 100 mph.

The construction crew had survived the daily geysers of saltwater which rained down on them ceaselessly. Constantly soaked, living on meager rations, and toiling long hours, the hearty crew continued in their progress. In fact, the soon-to-be infamous lighthouse was nearly complete.

For an example of the hard work involved, imagine this: The workmen spent 224 days simply blasting away at the craggy rock, which resembled a melted Hershey kiss at the summit.

More than 4,000 initial pounds of basalt had to be removed before construction of the lighthouse could begin.

Construction materials were brought out to the rock by several ingenious techniques using ropes, jibs, and makeshift booms.

For months the men worked tirelessly during the day putting the lighthouse together piece by piece. At night they would deter any ship veering too close to the treacherous rocks surrounding Tillamook Head.

To accomplish this feat they used blasting charges, set fires, and hollered if need be.

On this particular January night, a storm tore across the sea from the southeast and pelted the unlit lighthouse.

This was not unusual weather for those living on Tillamook Rock. Even Mr. Wheeler, the appointed superintendent of construction was notably reticent until one of his workmen appeared. The man reported hearing voices and said he may have seen the running light of a ship heading dangerously close to the rock. Wheeler sprung from his makeshift home to investigate.

From the abyss of the storm came the disembodied voice of the captain, H.R. Raven of the Lupata, calling out to his men, “Hard aport!”

Wheeler immediately ordered his workmen to place all lanterns in the tower; as speedily as possible a large bonfire was started.

The Lupata was a British ship on her way from Hiogo, Japan, bound for Portland, Oregon.

Now, merely 200 yards offshore, she rode perilously close to the rocky reef which jutted out from Tillamook Rock. To compound matters further, Captain Raven was relatively green in his duties, having only taken over recently from the previous captain.

“Her yards were aback, and she seemed to be working out of the dangerous place, but soon afterward the red light disappeared, and no further cries were heard from those on board,” says E.W. Wright, author of Lewis and Dryden’s Marine History of the Pacific Northwest.

That night the workmen went to bed believing that their endeavors had saved the British ship. The next morning they awoke to find the topmast of the ship plainly visible, sticking several feet out of the water. The men had heard the rigging and ship yawn with the effort of changing course, but what they did not know was that Captain Raven had mistakenly turned directly for a reef jutting out from Tillamook Rock.

The numbers are conflicting, but records indicate that there was a crew of 16 to 17 and one dog on board.

On that fateful night the entire crew of the Lupata was lost, with the exception of the ship’s dog that swam safely to shore. On January 4, 1881 the lighthouse crew negotiated the dangerous rock, which posed several threats to depart from, and braved the deadly waters. Once they landed on the beach they began to bury the bodies that had washed ashore.

In an ironic twist of fate the Lupata tragedy occurred just 19 days before the Tillamook Rock Lighthouse became officially operational.

In the end, it could be said that the Tillamook Rock Lighthouse, commonly known as Terrible Tilly, was as unlucky as the Lupata.

To learn why, please visit the Cannon Beach History Center and Museum.