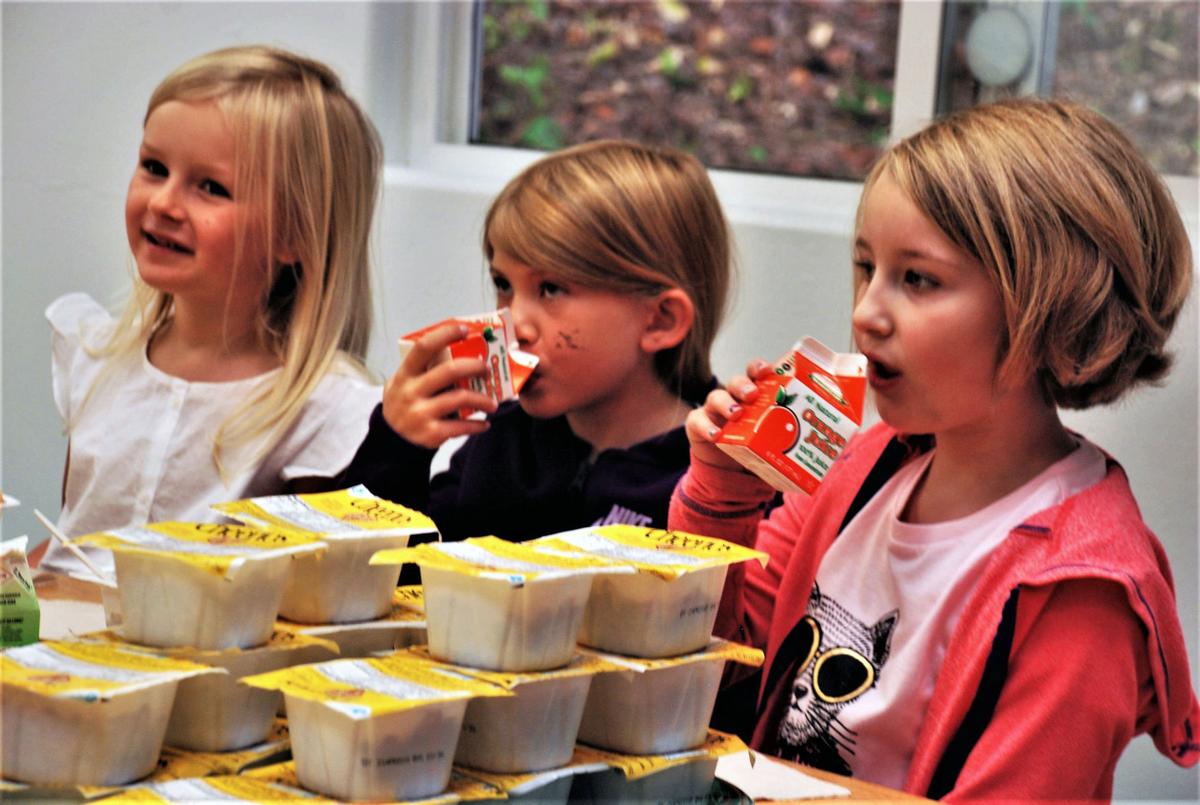 Sampling some juice before class begins on the first day at Cannon Beach Academy are, from left, Jayden Ahlstrom-Woody, Rian Dewey and Hallie Kropf. 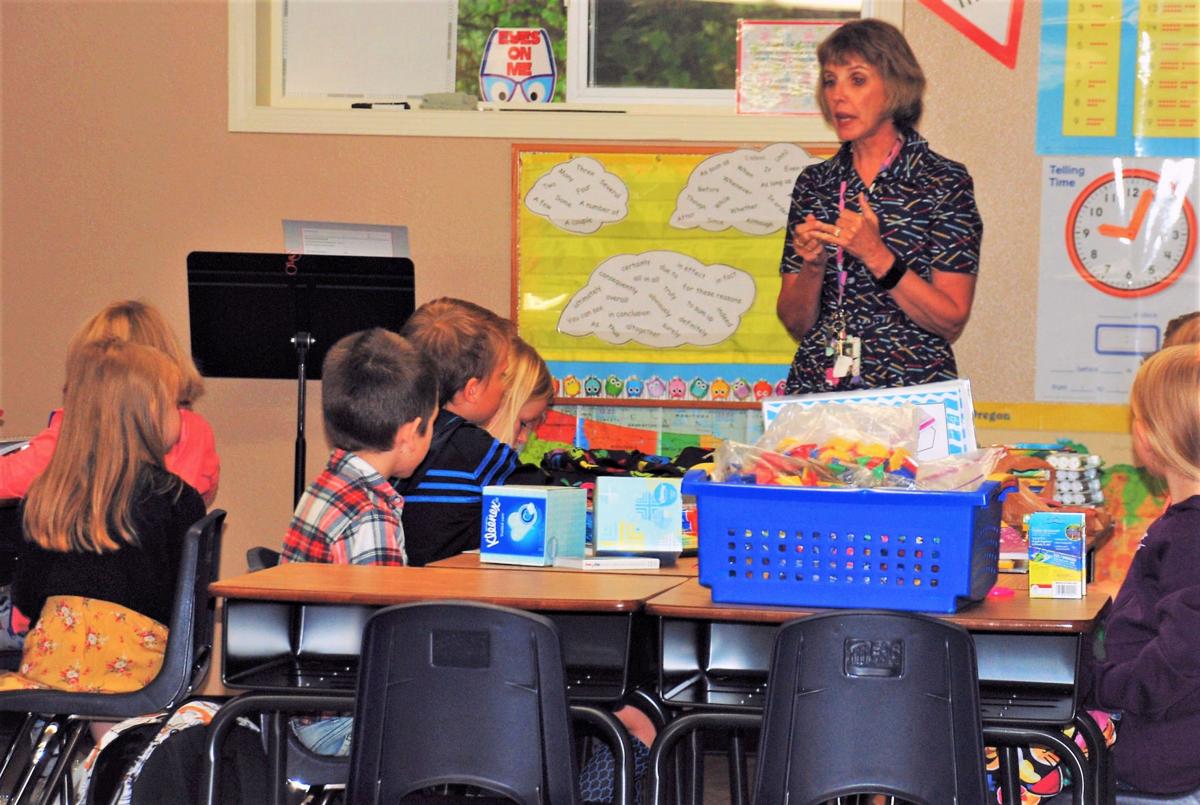 Theresa Dennis, first/second grade teacher, starts her class on the first day of school at Cannon Beach Academy. Volunteers are needed to assist with a variety of functions at the school. 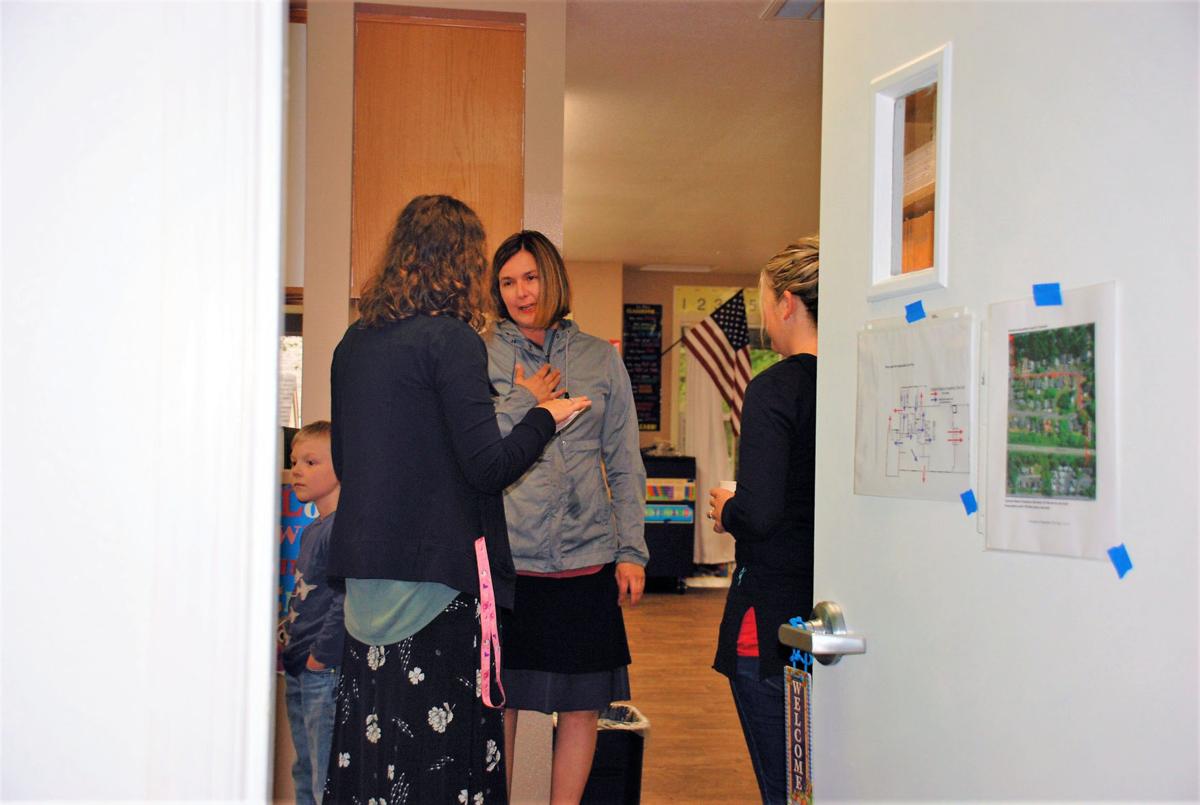 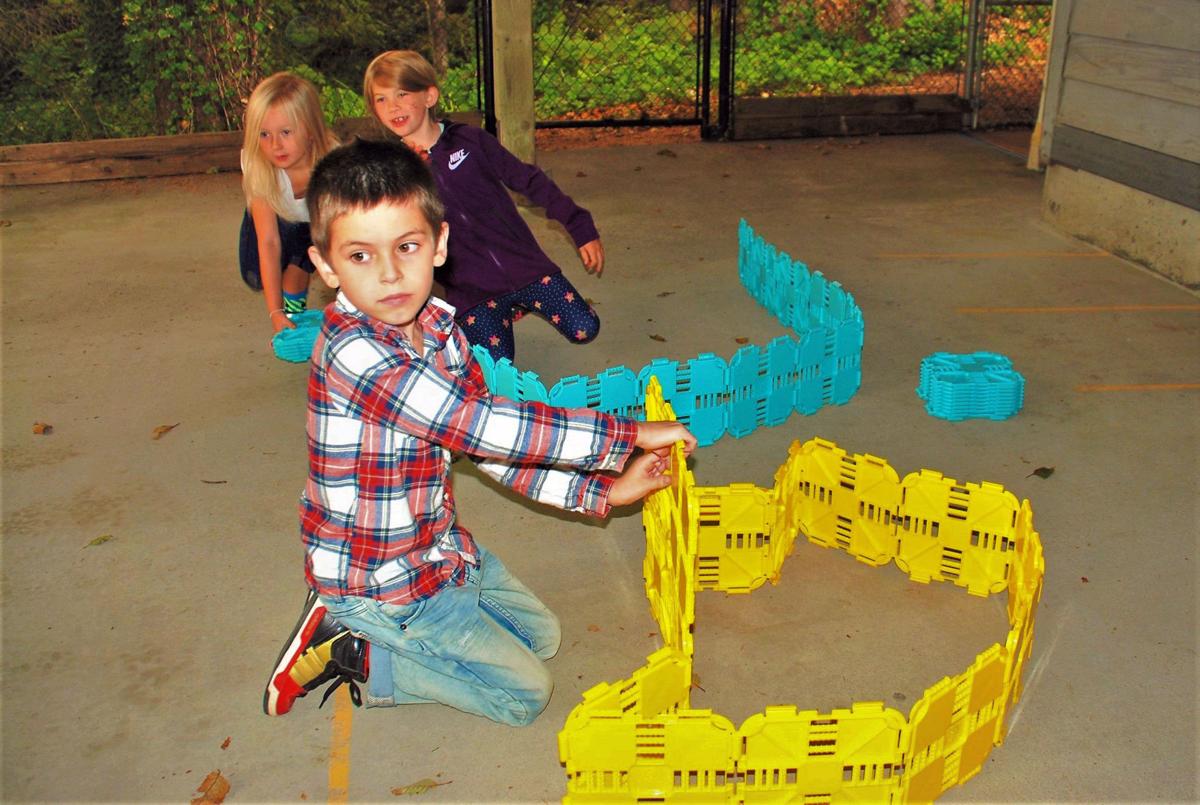 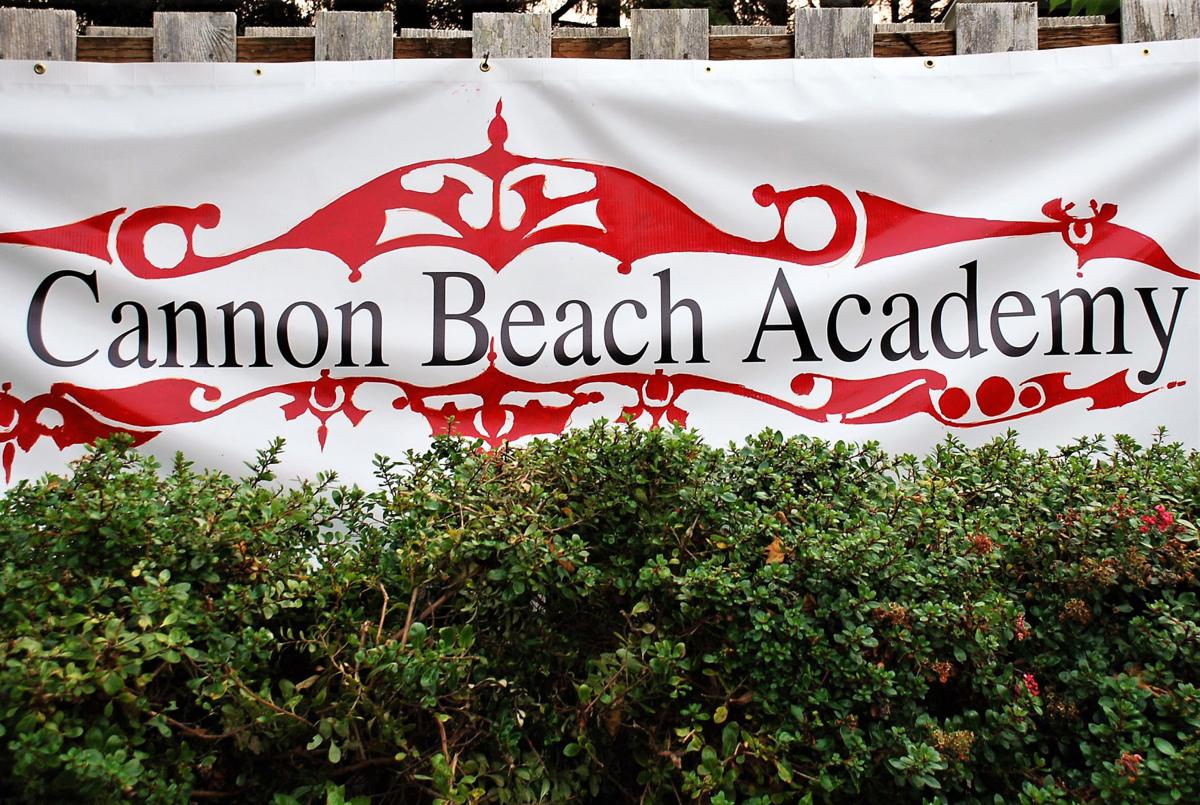 The Cannon Beach Academy banner finally hangs at the school's site — the former Cannon Beach Preschool and Children's Center. The city of Cannon Beach leased the city-owned building to the academy for three years. 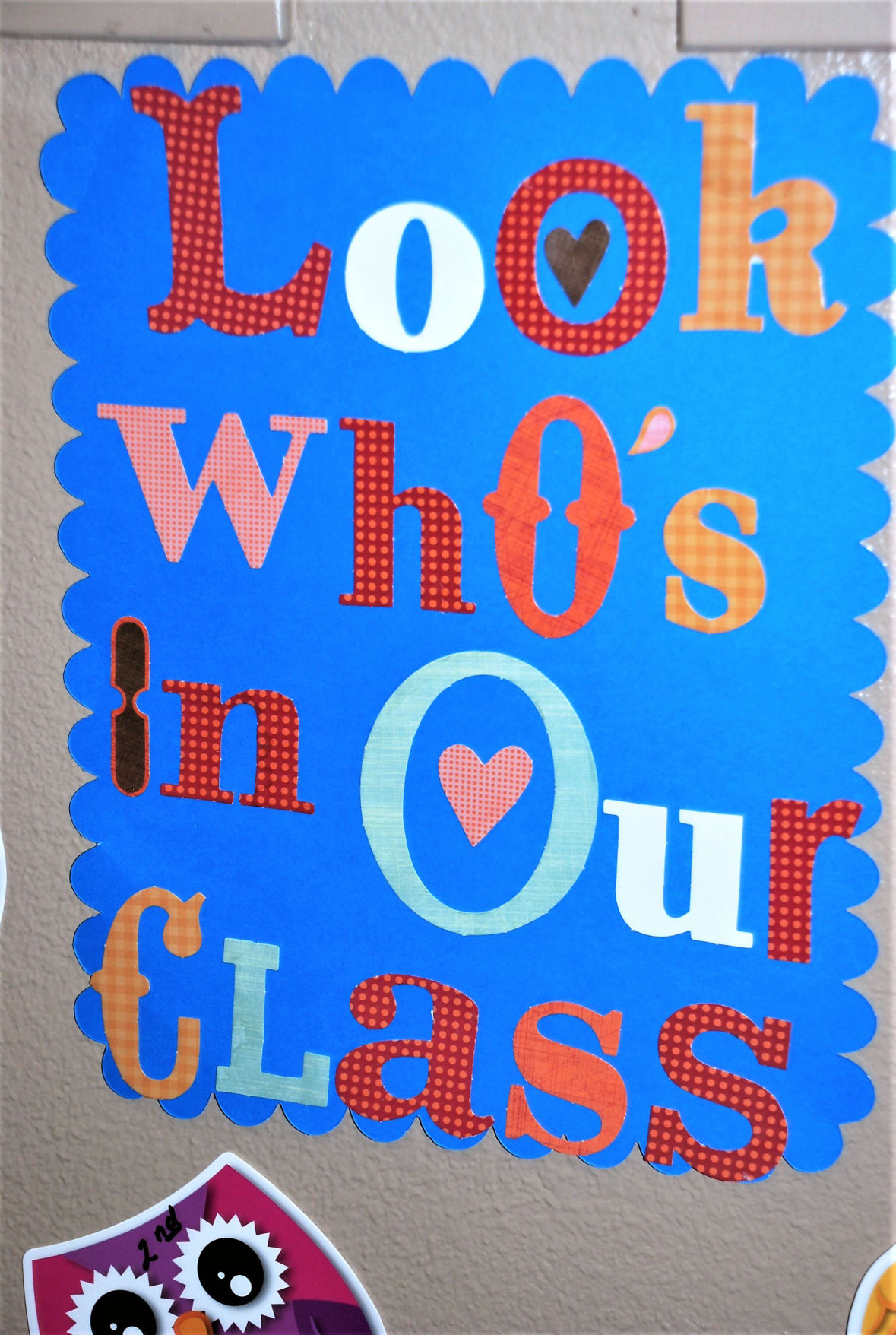 Several colorful signs hang on the Cannon Beach Academy's walls, welcoming students and introducing them to their classmates.

Sampling some juice before class begins on the first day at Cannon Beach Academy are, from left, Jayden Ahlstrom-Woody, Rian Dewey and Hallie Kropf.

Theresa Dennis, first/second grade teacher, starts her class on the first day of school at Cannon Beach Academy. Volunteers are needed to assist with a variety of functions at the school.

The Cannon Beach Academy banner finally hangs at the school's site — the former Cannon Beach Preschool and Children's Center. The city of Cannon Beach leased the city-owned building to the academy for three years.

Several colorful signs hang on the Cannon Beach Academy's walls, welcoming students and introducing them to their classmates.

Phil Simmons is a rock climber. He told me once that sometimes, when he climbs a rock, he can’t always see the path to the top. But, he added, others who have been there assure him that a path exists.

So he starts his climb, one step at a time. Eventually, he starts to find his way, and the path begins to appear; Simmons follows it, until his long, unsure trek is completed, and he reaches his destination.

The Cannon Beach Academy opened for the first time last week. Parents, their children in tow, rang the buzzer, and school Director Amy Moore opened the doors to the new school.

It was such an inauspicious beginning to an effort that began nearly five years ago and took so many twists and turns that anyone following the story could get dizzy trying to keep up.

In a Seaside School Board budget meeting in April 2013, then-Superintendent Doug Dougherty announced that the Cannon Beach Grade School — which had been the village’s educational and community center for 100 years — would close in two months.

But Phil Simmons, who was already leading an effort to build a school outside the tsunami zone, had something to say when the school board agreed to close Cannon Beach.

“You’re sacrificing our local school, and it frustrates me,” he said.

“We had this plan,” Simmons added. “It really feels the rug was pulled out from under us. Whether you like it or not, there will be a charter school. I’m confident of that.”

That June, hundreds of former students, teachers and community members bid farewell to the school during a barbecue on the school’s playground. They shared many memories: Debbie Nelson, who runs a florist shop in town, recalled all of the plays the students staged. Her father, Jim Webb, class of ’44, remembered being in a one-room schoolhouse before the current campus was built in 1951. Marlene Laws, who attended the school from 1945 to 1953, said she had remained friends with several of her Cannon Beach classmates.

The push to replace the village school continued in earnest. Parents filled the city council chambers several times to urge the Cannon Beach City Council to support the creation of a new charter school. They formed task forces to search for buildings to house the school. They examined educational plans, they researched state and federal laws governing charter schools, and they met with officials from the state Department of Education and the Seaside School District.

Although they knew that, by law, the school district would have to reimburse the charter school the amount it would cost to educate each student at Seaside Heights, the charter school board members needed more funds. A campaign was mounted to collect financial pledges from the community. Another $10,000 came from donation jars placed in local businesses.

And every time the school district denied their proposal for a charter school — because they didn’t have an adequate budget, or they still hadn’t pinned down a building, or their educational plans weren’t entirely complete, or their enrollment was insufficient — the charter school’s supporters insisted that, eventually, the Cannon Beach Academy would be a reality.

Plans to open in the fall of 2015, then 2016, fell through. Those who weren’t active with the charter school doubted it ever would open.

“They’re really trying to help us pull this off,” he said.

But before the academy could open, it needed a building. The academy board settled on the former Cannon Beach Athletic Club space and put aside money for renovations. But the estimate came in at $240,000, and that was too much, especially when the building lacked an adequate playground and was still in a tsunami zone.

The board turned to the Cannon Beach City Council (full disclosure: This reporter is a City Councilor) and requested the use of the city-owned building that, until last year, housed the Cannon Beach Preschool and Children’s Center. The city leased the building to the academy and granted the school a temporary occupancy permit until November. The school still needs to install a fire safety system — something the preschool didn’t have.

When the academy secured the building, volunteers rushed to help in the month the academy had left to fulfill the deadline the Seaside School District had given it.

“I can’t even describe to you how many volunteers we’ve had,” Amy Moore said. “People came out with our landscaping party and our painting party. We’ve had donors who have given us supplies. We’ve had individual families who have helped us with maintenance. We’ve had housekeeping services. We had volunteers at our open house. I can’t even begin to thank them from the bottom of my heart.”

Just before the first day of school Sept. 5, the Cannon Beach Academy was opened to the community. Bright posters saying “welcome” and other greetings for the new students were taped to the newly scrubbed and painted walls. In the kindergarten room, desks replaced the cribs from the former preschool.

This year, kindergarteners will learn their alphabet and how to read and write, Jay said.

“Excellent academics” is what parent Jessica Stapleton expects for her 6-year-old daughter, a first-grader. “And great friendships,” she added.

The school opened with 20 students, all from Cannon Beach. Although the academy is five students shy of the enrollment agreement it had with the school district and has about 20 fewer students academy officials thought they would have, Moore is optimistic that more students will enroll once word gets out that the public, tuition-free school is open.

Academy board President Kellye Dewey has worked alongside Phil Simmons ever since parents began meeting at the fire station in Cannon Beach to discuss the possibility of a charter school. Her daughter, Rian, 8, will attend second grade there, and Dewey hopes that Rian will benefit from the same small classes and good teachers that Dewey experienced as a student at Cannon Beach Grade School.

The academy, Dewey said, is the “heartbeat of the community.”

“We’ve seen a change since our school shut down,” Dewey said. “Families have moved away, and we’re hoping that bringing a school back will revive that part of the town that’s been missing.”