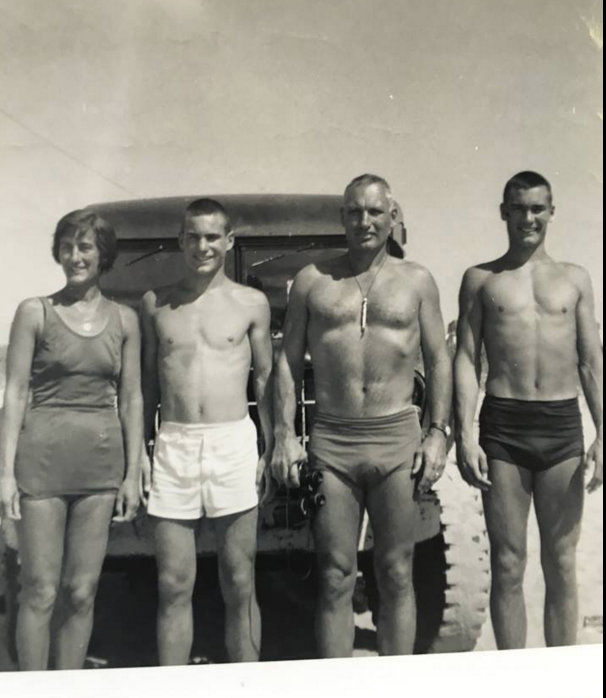 Betty, Bryan, Ralph and Scott Davis on the Gearhart Beach in 1962. 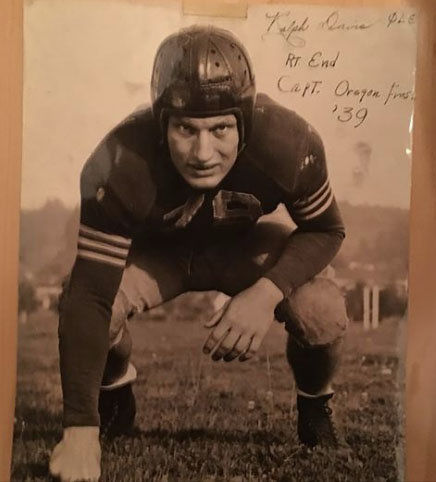 Ralph Davis played football for the University of Oregon before World War II, and finished his college career after the war with Oregon State University. 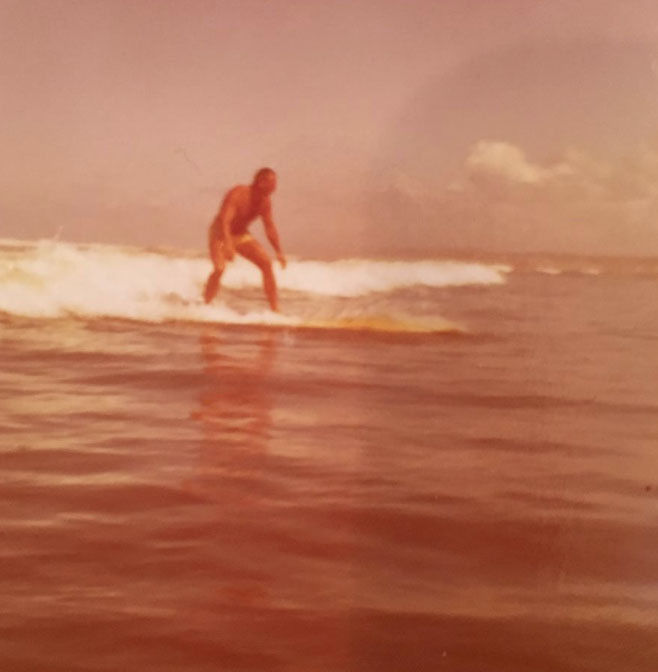 Ralph S. Davis Jr. was regarded as a pioneering surfboarder as well as lifeguard and track coach. 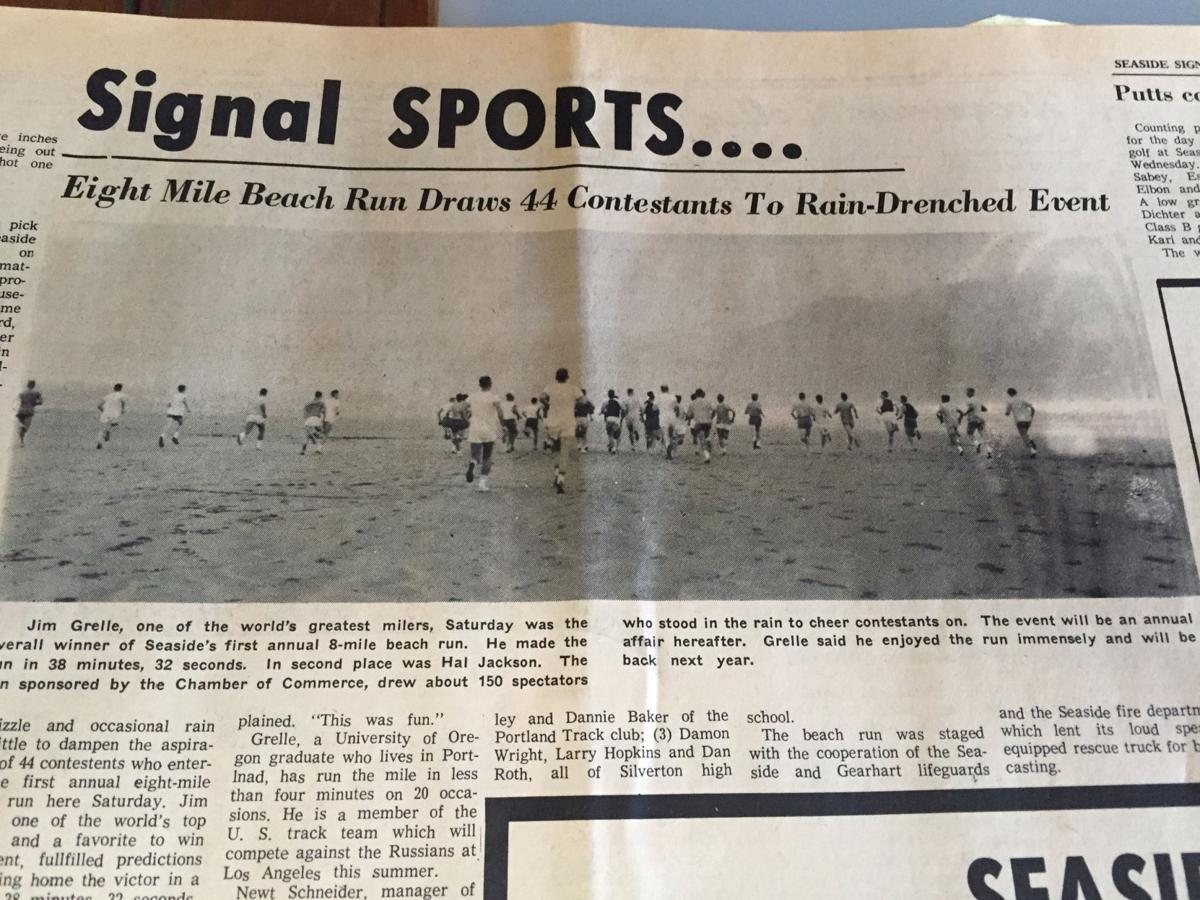 Newspaper coverage of the first beach run in 1966. 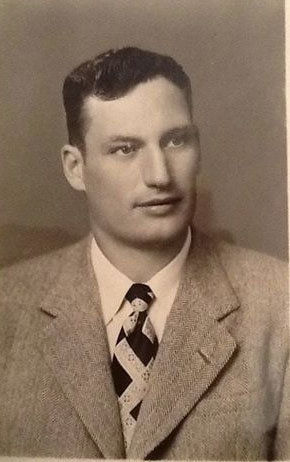 Betty, Bryan, Ralph and Scott Davis on the Gearhart Beach in 1962.

Ralph Davis played football for the University of Oregon before World War II, and finished his college career after the war with Oregon State University.

Ralph S. Davis Jr. was regarded as a pioneering surfboarder as well as lifeguard and track coach.

Newspaper coverage of the first beach run in 1966.

Ralph Davis was almost superhuman in the eyes of those at the beaches of Seaside and Gearhart. A strapping man who competed at every age, the Portland State University coach and Seaside lifeguard died Aug. 14.

Davis left his mark not only with the 250 lives he saved over his time on the beach, but as the founder of the Seaside Beach Run and Trail’s End Marathon.

“He certainly was a notable figure on the North Coast,” Cannon Beach’s Peter Lindsey said. “He was a huge, lantern-jawed, strapping, fine, gentle, but rugged character, believe me.”

“He and his wife, Betty, and their sons, Bryan and Scott, were lifeguards, first in Seaside, then Gearhart for many, many years when I was a child,” Gearhart’s Jeff Ter Har said, “He was just super nice, could talk to you forever, would do anything for you — just fabulous. ”

A lifelong Oregonian born in Portland in 1920, family members described Davis’s athletic childhood along the Columbia River Gorge, where at a young age he constructed his own boat and tacked it against the wind.

That athleticism was to be a characteristic of his entire career, as a football player at the University of Oregon and Oregon State and later as a track and field coach at Portland State University,

On the North Coast, it was in Seaside as founder of the Beach Run and in Gearhart as a lifeguard that he made his mark.

Labor Day 1965 had seen the third consecutive year of unrest in Seaside, as papers described “hundreds of unruly youth who attempted unsuccessfully to take over the town.” The city was an “armed camp,” as Oregon State Police and National Guard put Seaside in virtual lockdown.

The July 1966 Seaside Beach Run was a response to the unrest, Jack Davis said. “Dad wanted to promote a more positive image of the community by organizing an 8-mile run.”

“Ralph and Betty were an extraordinary, powerful couple that were really a true force of nature,” recalled Seaside’s Mary Blake, former longtime general manager of the Sunset Empire Park and Recreation District. Blake said. “They believed if you engaged people, they have a great time, instead of causing problems because they didn’t have anything to do.”

That first year, a rainstorm shortened because the mouth of the river was “a little too wide and deep for the safety of the runners,” according to the Seaside Signal at the time.

University of Oregon track star Jim Grelle — who ran in the 1960 Olympics for the United States — won the 7.5-mile loop with a time of 38 minutes, 32 seconds. “The tension in regular competition is extreme,” Grelle told the Signal afterward. “This was fun.”

The first run featured 44 runners participated; by the 1970s, that number grew to more than 1,200 participants.

“Every year, we had to redo the course because of the change in the estuary,” Blake recalled one race when, because of high tides, runners were diverted over hot sand dunes. Another year, fog was so thick Blake and Davis patrolled the shorelines in a rig to protect runners who might stumble into the water.

“It was all done with volunteers,” Bryan Davis said. “A lot of these volunteers were people that my dad taught or had experience in athletics. He could call upon them, and they really liked him and respected him and would pretty much do anything for him. They took positions timing things, recording things.”

Ter Har said he likes to say he was the first to finish the marathon — ”My claim to fame is I won it five times because I drove the lead car,” he laughed.

An avid surfer, kids “looked up to dad like Duke Kamehameha,” the lifeguard god, Scott Davis said. “He was very athletic. He had a good stature. His body was built like Tarzan.”

Ralph Davis was one of the first people to ride a surfboard in Seaside and his strength in the water was renowned — strong enough to single-handedly clear logs or tow them away.

“The high school kids in the area would come down to the beach and my dad would during his breaks would organize touch football,” Jack Davis said. “It was a lot of fun. He never thought of himself being the age that he was. He always thought of himself as much younger. Even in his 80s or 90s he didn’t want to go to someplace where ‘the old people were.’”

There was no lifeguard tower at the Gearhart beach, Ter Har remembered, so patrols were on foot or in the jeep.

Cannon Beach’s Lindsey recalled Ralph Davis as his water safety instructor at Portland State. “I was a pimply-faced 19, 20-year-old, slightly built person,” Lindsey said. “He was about 240 pounds, all gristle and muscle. One of the things he would do would require you to rescue him.”

One of Davis’s major accomplishments was to organize lifeguard crews to request state funding. “The state actually disbursed an amount of money to communities to buy trucks and lifesaving equipment,” Lindsey said.

Once Davis and the Gearhart lifeguards challenged the Cannon Beach lifeguards to a volleyball game on Pacific Way.

“When we arrived to meet the challenge, we get down on the beach,” Lindsey said. “He was there with his wife and son and a couple of other team members. One gentleman was sitting there — Ralph introduced us and his voice sounded very familiar. It turned out to be this fellow named Adam West — Batman on television. His mother owned an old hotel in Gearhart. He was having a martini, visiting. We beat them, by Jove, but we laughed about it afterward.”

In the 1970s, Ralph Davis became “one of the pioneers of korfball” in the United States — a “sort of Dutch version of basketball,” according to Lindsey. Around here, some people call it pickleball, former park district manager Blake said.

“You can live your life with this aliveness and joy, and really being in the moment, and he and Betty were the absolute representation of that,” she said. “They beamed. Ralph had that smile, physique, this attitude, this knowingness — it was an absolute pleasure to be around them.

“The thing about growing old is, you don’t have to get old,” she added. “That’s the magic. He was able to do that. He just didn’t age.”

Are you attending a County Fair this year?