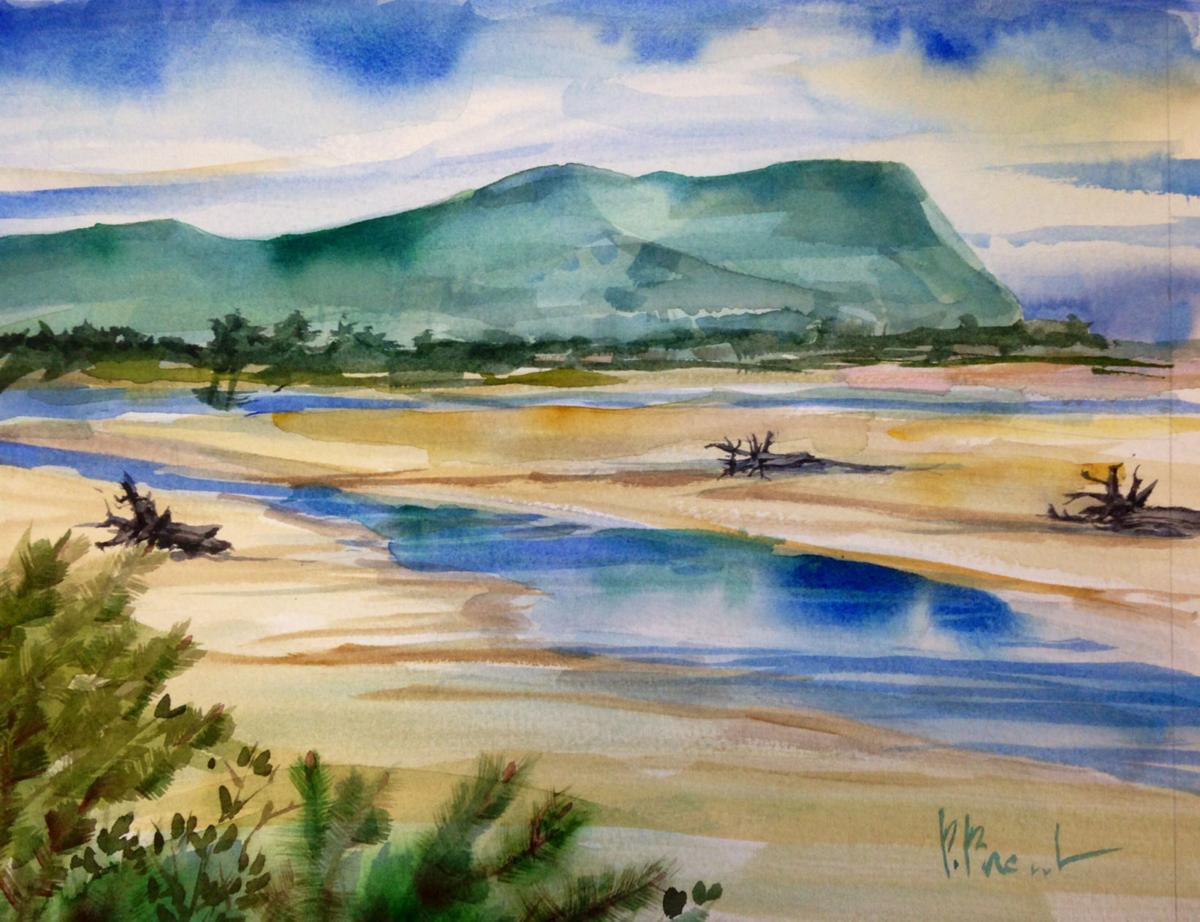 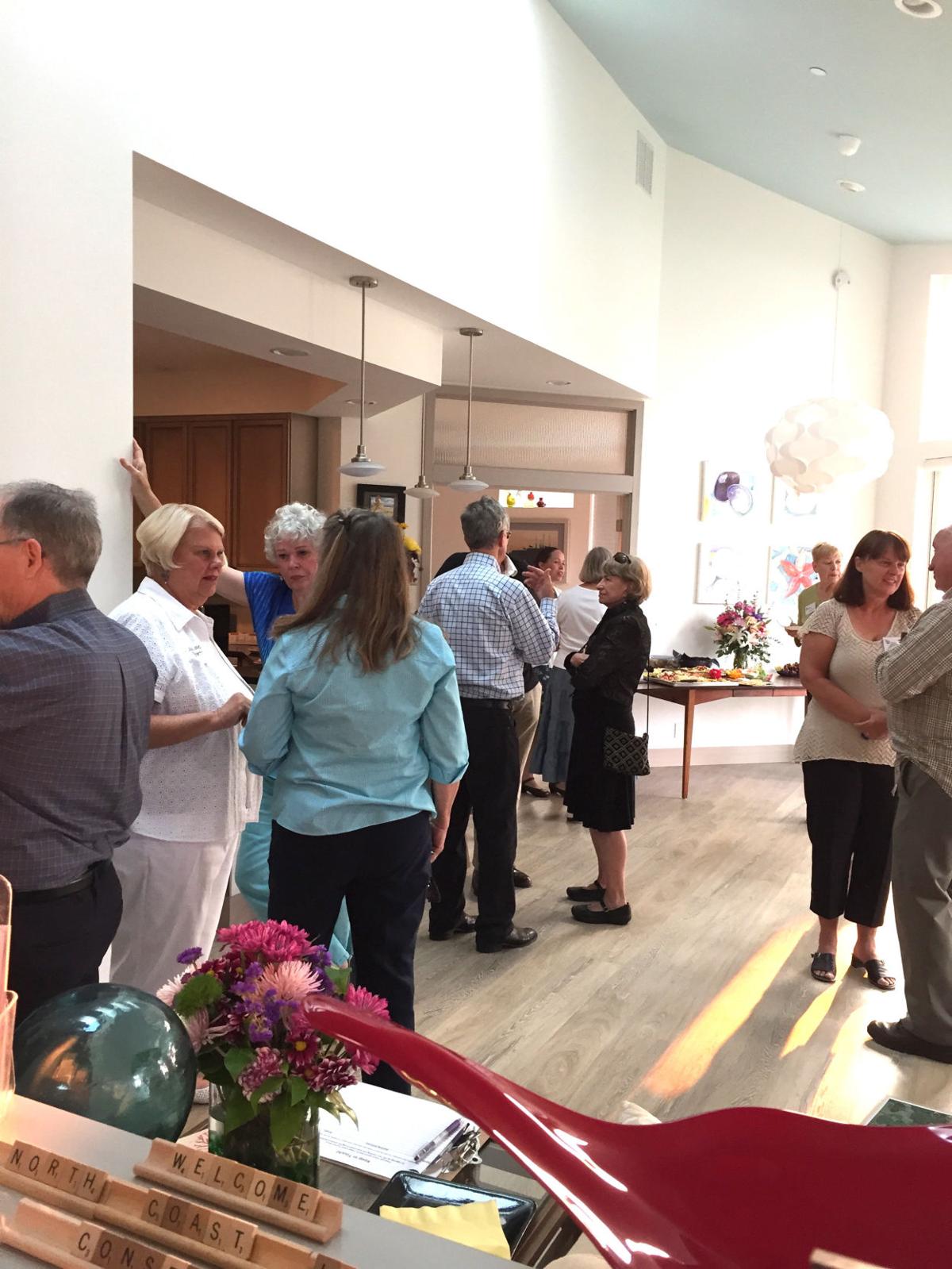 Guests at the home of Paul and Lana Brent in Seaside at a reception for the North Coast Land Conservancy, Saturday. 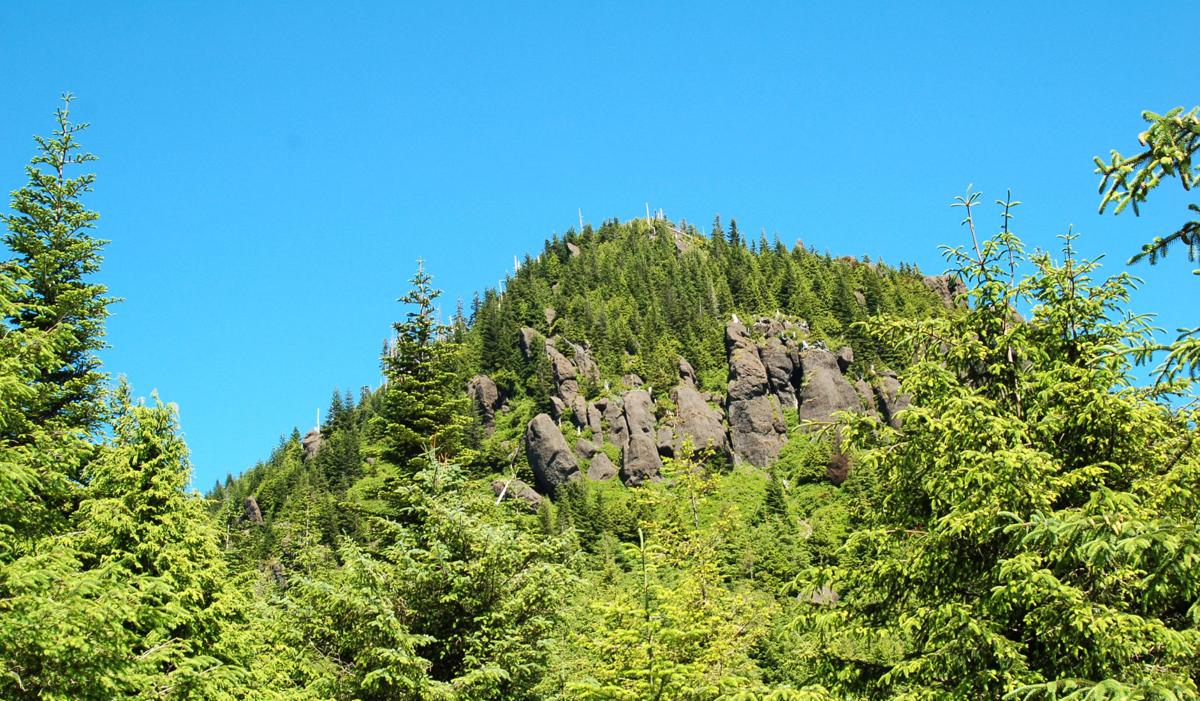 Guests at the home of Paul and Lana Brent in Seaside at a reception for the North Coast Land Conservancy, Saturday.

Gallery owners Paul and Lana Jane Brent split their time between the North Coast and Panama City, Florida. They opened their home this summer to friends of the North Coast Land Conservancy as an overture to new members and potential supporters of a land purchase that could be the final jigsaw piece uniting a critical parcel between Cannon Beach and Seaside.

The Coastal Edge Initiative focuses on the entire region stretching from Tillamook Head south to Nehalem Bay and extends east to the summits of the peaks fronting the shoreline — “the headland that is visible from everywhere we are,” according to the conservancy’s Executive Director Katie Voelke, a Cannon Beach resident.

Properties supported in the initiative include Onion Peak, Ecola Creek Forest Reserve, Ecola Road Wetlands and Shorewood Wetland. Circle Creek, a 364-acre property in Seaside further lowland, was purchased by the conservancy in 2004 and is classified as part of the Necanicum Wildlife Corridor Initiative — “but classifications are squishy,” Communications Coordinator Bonnie Henderson said. “Some properties fit into more than one initiative.”

In May, the conservancy announced intent to purchase the 360-acre Boneyard Ridge property between Circle Creek and Ecola Forest Reserve.

“If you drive along 101 to south of Seaside and you’re looking across Necanicum to the Circle Creek property, all the land that rises above that, that’s Boneyard Ridge,” Henderson said. “It’s a big part of Seaside’s backdrop.”

The site’s dramatic name came from the discovery of elk bones by hunters on the property, she added..

The purchase would create 3,500 connected acres from the summit of Tillamook Head to the Necanicum River Valley. The conservancy’s goal is to allow the land to mature into a complex rain forest of the kind that once characterized headlands all along the Oregon Coast.

“The big win here would be the entire rain forest,” she said. “All the trees that will be allowed to grow to maturity, and the understory plants. When that happens, and while it’s happening, dozens of species benefit, from microorganisms in the soil to little voles and red-legged frogs on the forest floor and owls above. Everything that lives in the coastal forest.”

While the property does not have ocean access, conservancy members intend to open Boneyard Ridge to the public.

“It would be a great community benefit, not to mention a incredible contiguous wildlife habitat,” Henderson said.

The price tag for the property — “well over $1 million” and possibly as high as $1.8 million, according to Henderson, is considered within reach, especially with a $524,000 matching fund grant from Oregon’s Watershed Enhancement Board announced April 29. In addition, Henderson announced this week the conservancy raised an additional $500,000 from an anonymous donor. Those funds, she said, are not specifically earmarked for Boneyard Ridge but could be used for its purchase.

In mid-August the conservancy received a grant of $58,000 from the Meyer Memorial Trust for the conservancy’s efforts, along with commitments from Cannon Beach Community Grants program and the Marine Reserves partnership.

“These donations are for the conservancy’s conservation planning from the areas of Tillamook Head to Neahkahnie Mountain,” Voelke said Monday. “Support like these grants makes it possible for us to do the on-the-ground work that leads to acquisitions such as Boneyard Ridge.”

While negotiations are far from complete, the conservancy hopes to raise the money by October 2016, before the state grant expires.

Members are confident they can raise what it takes. For one thing, they have a willing seller.

“We only work with willing sellers and these people are willing to sell it,” Henderson said. “That’s a core piece of the land trust. We don’t hug trees and chain ourselves to anything. If you want to sell, that’s great. We don’t try to strong-arm anyone. If we can come up with the money by hook or by crook, great. This is one of those properties.”

With the clock ticking, the conservancy is in what Henderson called “full-bore” fundraising mode from private citizens, public agencies and private foundations. The Circle Creek purchase in 2004 was made possible by the combined efforts of more than 50 individuals and organizations. The North Coast Land Conservancy will have to duplicate those efforts to acquire Boneyard Ridge.

“When you’re on the highway looking up, wondering, ‘Is that public land? Will it be harvested?’ Will it always be there?’ We have the chance,” Voelke said at the Brents’ Seaside house party. “If we all keep working on this, it will. I will, hopefully, be here a year from now celebrating that acquisition.

“Cheers to here!” she added, a toast that seemed most appropriate.

Efforts throughout the North Coast

“Along with events in Seaside, over the next few years the conservancy will be reaching out even more to the community groups and individuals of Cannon Beach, Arch Cape, Falcon Cove, Arcadia Beach, Manzanita, Nehalem and others that skirt the edge in order to gain more insight and perspective into the conservation goals and community concerns, hopes, and wishes for their surrounding landscape,”North Coast Land Conservancy Executive Director Katie Voelke said.