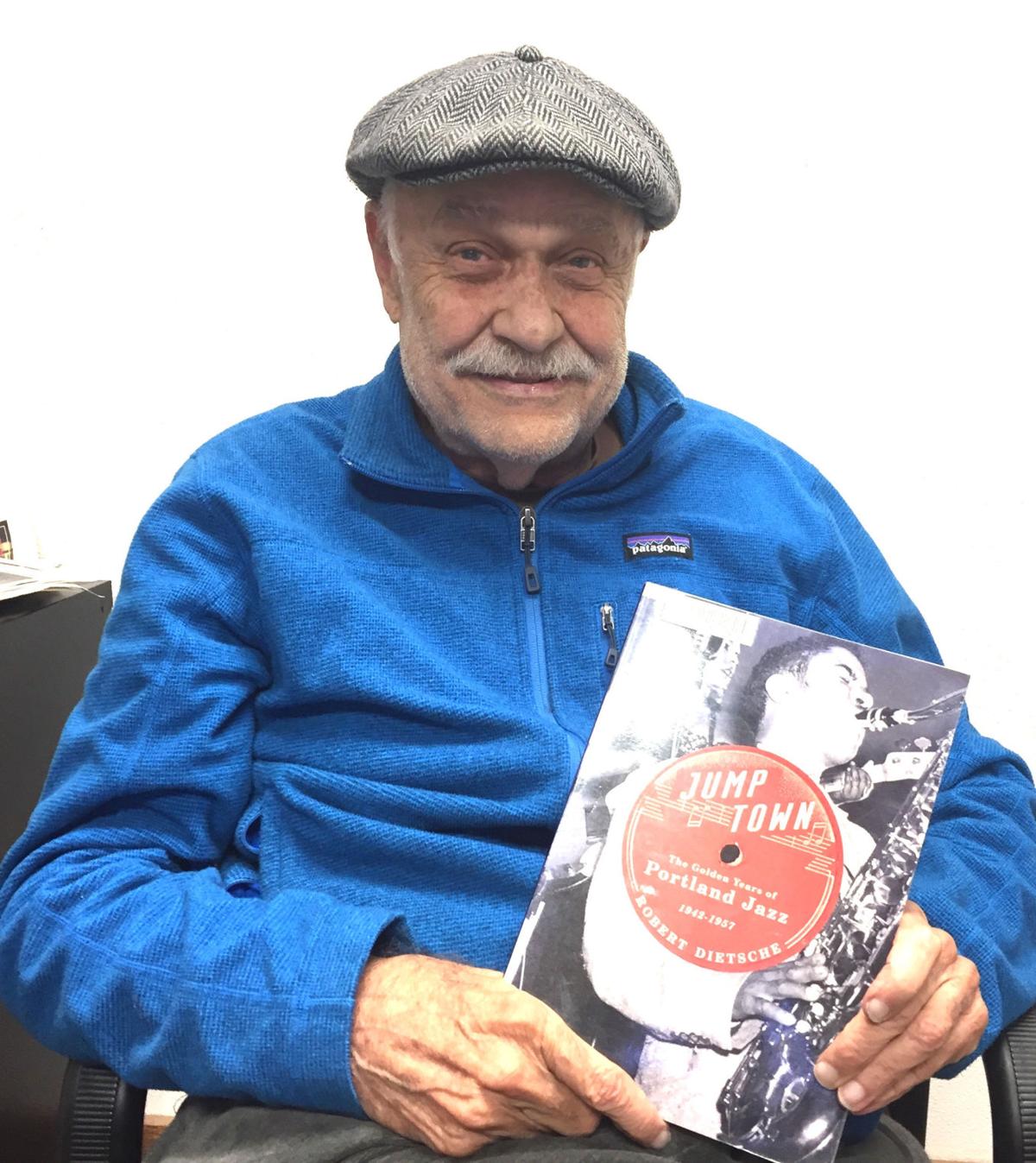 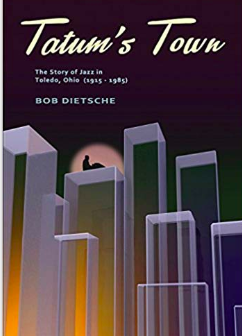 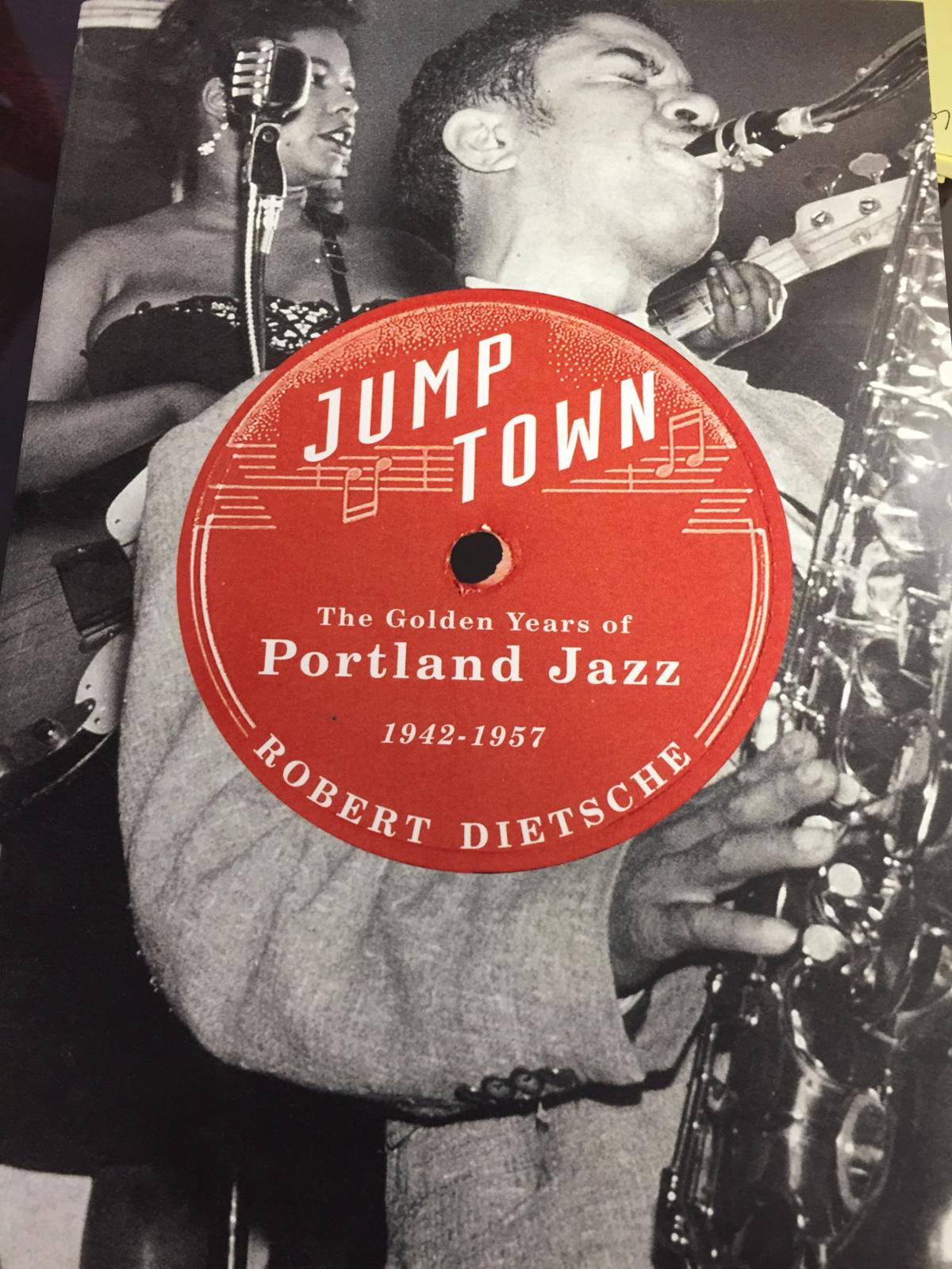 ‘Jump Town,' a history of jazz in Portland by Robert Dietsche. 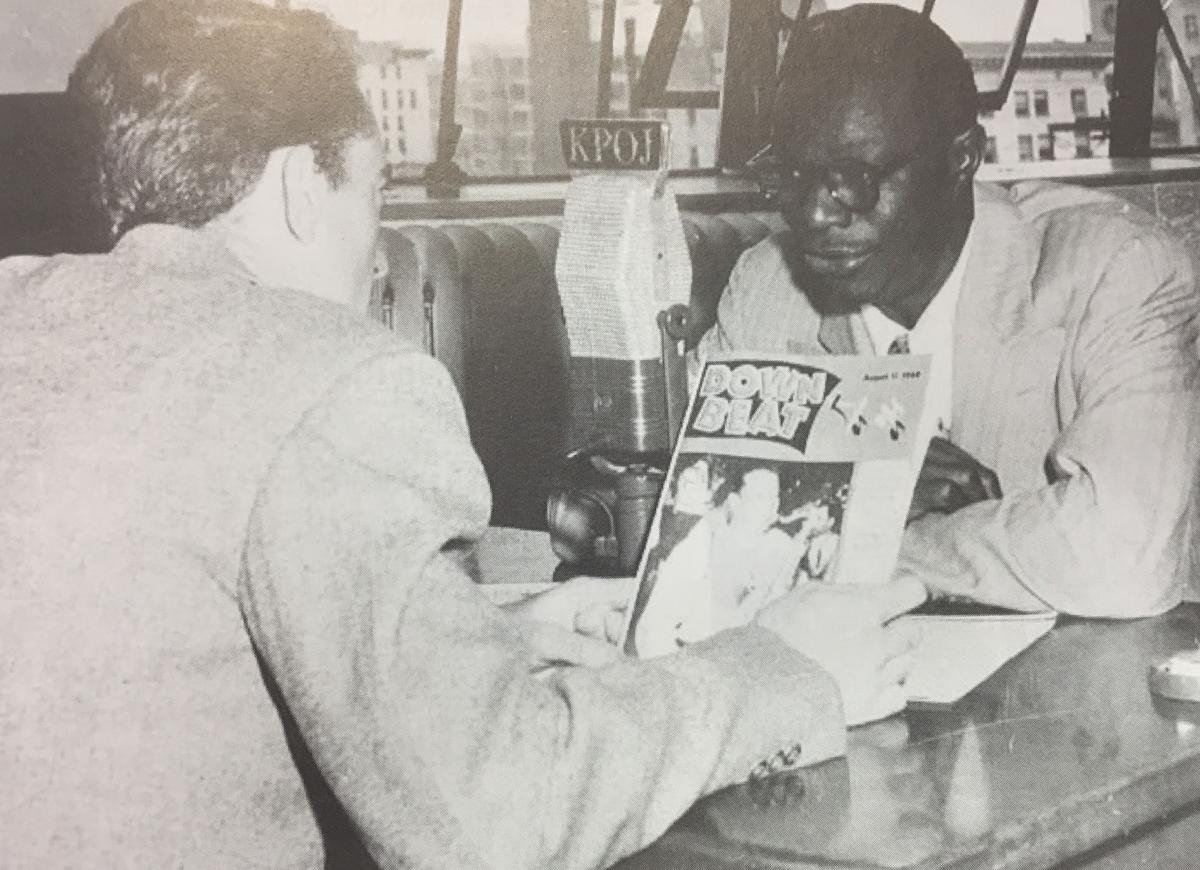 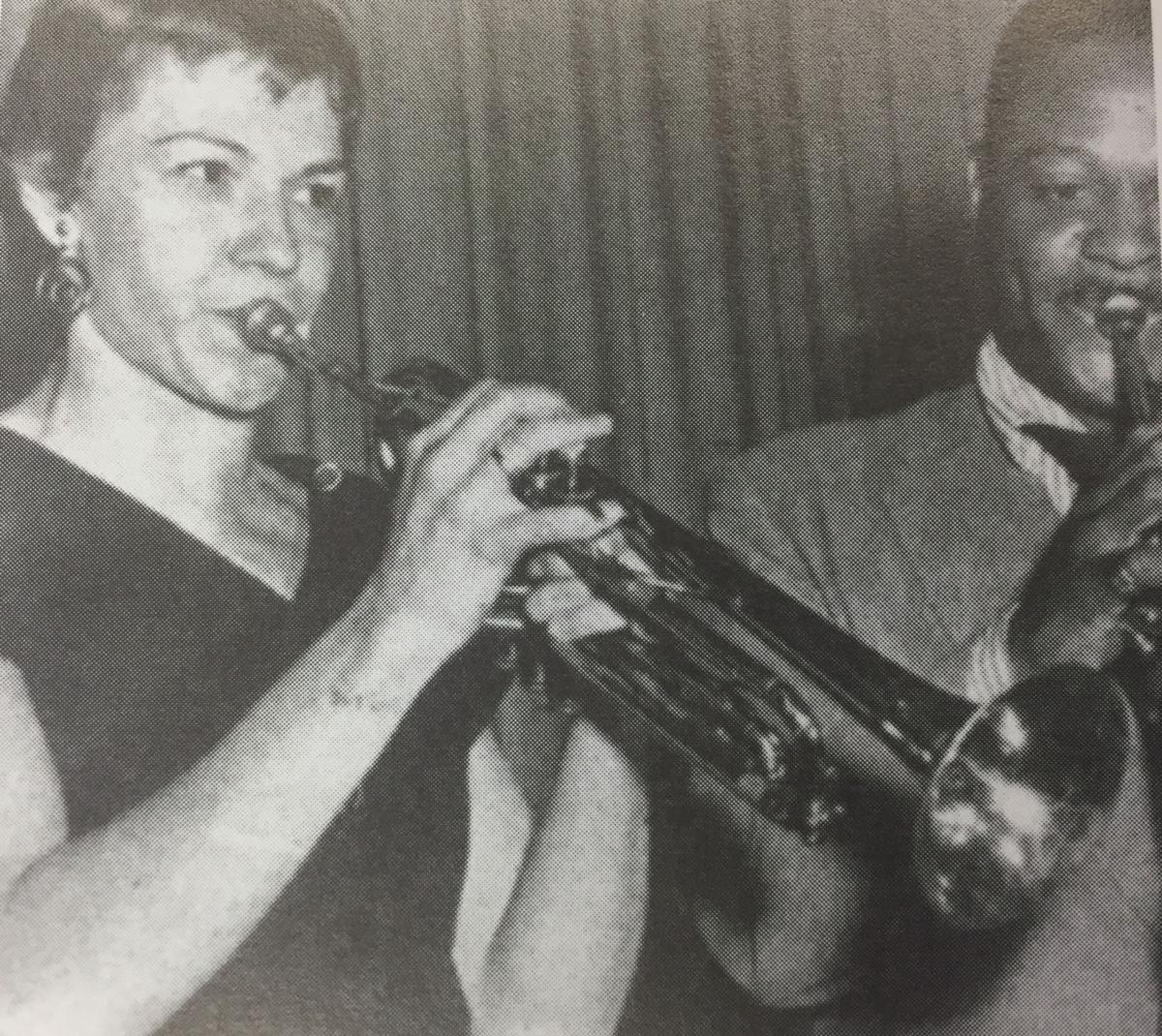 ‘Jump Town,' a history of jazz in Portland by Robert Dietsche.

Many of the stars of the day have long since been forgotten. Others live on in the annals of the city’s musical history, from visitors like Duke Ellington, Count Basie and Louis Armstrong to locals like Harry Gillgam, Tommy Todd and Sid Porter, a star at the Chicken Coop, who knew “every song in all keys.”

“Inland seaports with good railroads make for great jazz, especially during wartime when there is an acceleration of fresh ideas and fashions from the thousands of servicemen and defense workers arriving,” he wrote.

Dietsche, a Manzanita resident, is a chronicler of these halcyon days in “Jump Town: The Golden Years of Portland Jazz, 1942-1957,” from the Dude Ranch to McLendon’s Rhythm Room.

“Jump Town,” published in 2005, remains the go-to work on jazz and its performers in the Rose City, places like the Dude Ranch, Jimmy Mak’s, the Chicken Coop and Madrona Records, “the meeting place along Williams Avenue,” Dietsche said in 2017.

“Jump Town” stands as a reference for old-timers savoring the nostalgia and young fans seeking to connect with the city’s musical roots.

The son of a Nabisco executive, Dietsche graduated from high school in Toledo, Ohio. He headed west to the University of Oregon on a partial tennis scholarship to study English. In Eugene, he met his wife Susan, a marriage still strong after 55 years.

Dietsche taught in the Beaverton and Oregon City public schools before making a career shift in 1973.

The venture provided an opportunity to explore his love of jazz and turn it into a lucrative career.

“It was the first used record store in Oregon and it took off like fire,” Dietsche recalled. “My God, all those people who were giving it away to Goodwill, we were getting money for.”

“Everybody came in,” he said, from the comedian Jack Benny to the Grateful Dead and former Portland Mayor Frank Ivancie.

The store remained under Dietsche’s ownership until 1999, when it was sold to an investor seeking to expand into a national chain.

“It was mostly jazz those first few months, having been pared from their collections, and the rock section was only one crate at first,” wrote a friend of Dietsche’s in an online music forum. “Their average price was $2.50. The rock section soon grew to half the store, but it was still the favored place for jazz collectors, and there was a good section of other categories too.”

What Dietsche does for Portland in “Jump Town” he replicates for his childhood hometown in his new book, “Tatum’s Town: The Story of Jazz in Toledo, Ohio (1915-1985).”

Dietsche chronicles the urban culture of a Midwestern city where “dance halls, gaming halls, pool halls and taverns proliferated — and if you messed with the wrong people, “you might find yourself in a cement suit at the bottom of the Maumee River.”

“For her size and weight, Toledo, Ohio, has more than her share of great moments in jazz,” Dietsche writes.

Tatum himself, whose “left hand was a wondrous thing,” exercised his fingers to master keyboard intervals by “carefully manipulating selected Brazil nuts between his fingers so as to extend his reach on the piano.”

The author sets the scene: “Sitting at the piano, one eyelid at half mast, his head turned upward, a glass of beer and a pack of Luckies within reach, was Art Tatum, a legally blind native Toledoan who would become the greatest piano player of them all.”

Dietsche’s look back began in 1980 with a profile of Toledo guitarist Arv Garrison, who appears on historic recordings of saxophonist Charlie “Bird” Parker. Garrison, “a lady-killer with blonde wavy hair,” was a pioneer of bebop jazz in the 1940s, first attracting attention after winning a high school variety show.

“I found out he went to my high school,” Dietsche said. “If you look up four of the most important albums Charlie Parker did — he’s on them.”

After researching Garrison’s career, Dietsche delivered a piece for the Toledo Blade newspaper that won him a fan letter from the foremost jazz critic of the era. “I got this letter from Leonard Feather congratulating me on the job I did,” Dietsche said. “There’s no higher honor. That really got me into the story.”

“I’ve got this thing about Toledo, my mistress,” Dietsche said. “I always wanted to go back. I didn’t care what Thomas Wolfe said. I figured out a way to do it: Go back and write a story and have fun.”

“Tatum’s Town” caps a career of education, music and history, earning the author a certificate of merit award for excellence from the Association for Recorded Sound Collections. The awards are given to authors of books, articles or recording liner notes to recognize those publishing work considered the best in recorded sound research.

Meanwhile, Dietsche’s literary efforts continue with “Eight Forgotten Ones,” a work in progress about eight great, underrated musicians Dietsche has developed particularly affinity for — like trombonist Ray Sims, the brother of saxophonist Zoot Sims — and Portland arranger Tommy Todd, who took Hollywood movies by storm in the 1940s. Todd, “the most talented guy to come out of Portland, provided charts for Benny Goodman, Lionel Hampton and Tommy Dorsey before his death in obscurity in the early 1980s.

“Tommy Todd was in the Billy May category,” Dietsche said, referring to the great film and television arranger and composer. “Nobody knows anything about him. He was fascinating.”

Today, Dietsche and his wife Susan enjoy life in Manzanita. He makes the drive north on Highway 101 travels north to the Clatsop County Animal Shelter one or two days a week.

For those in the South County, Dietsche can regularly be found at Patty’s Wicker Cafe in Seaside, a welcoming place, he said, where you “can’t improve on perfection. … There’s nothing like it!”