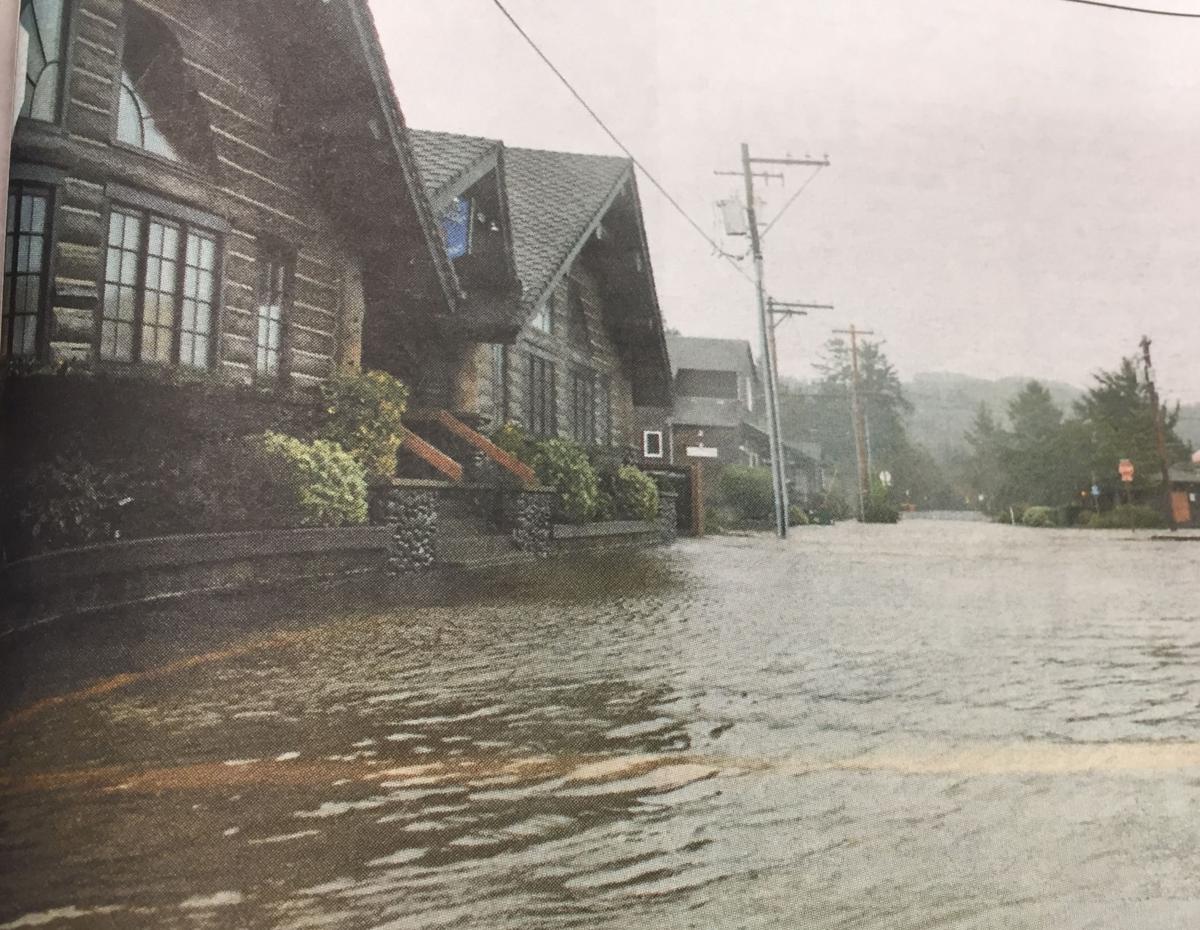 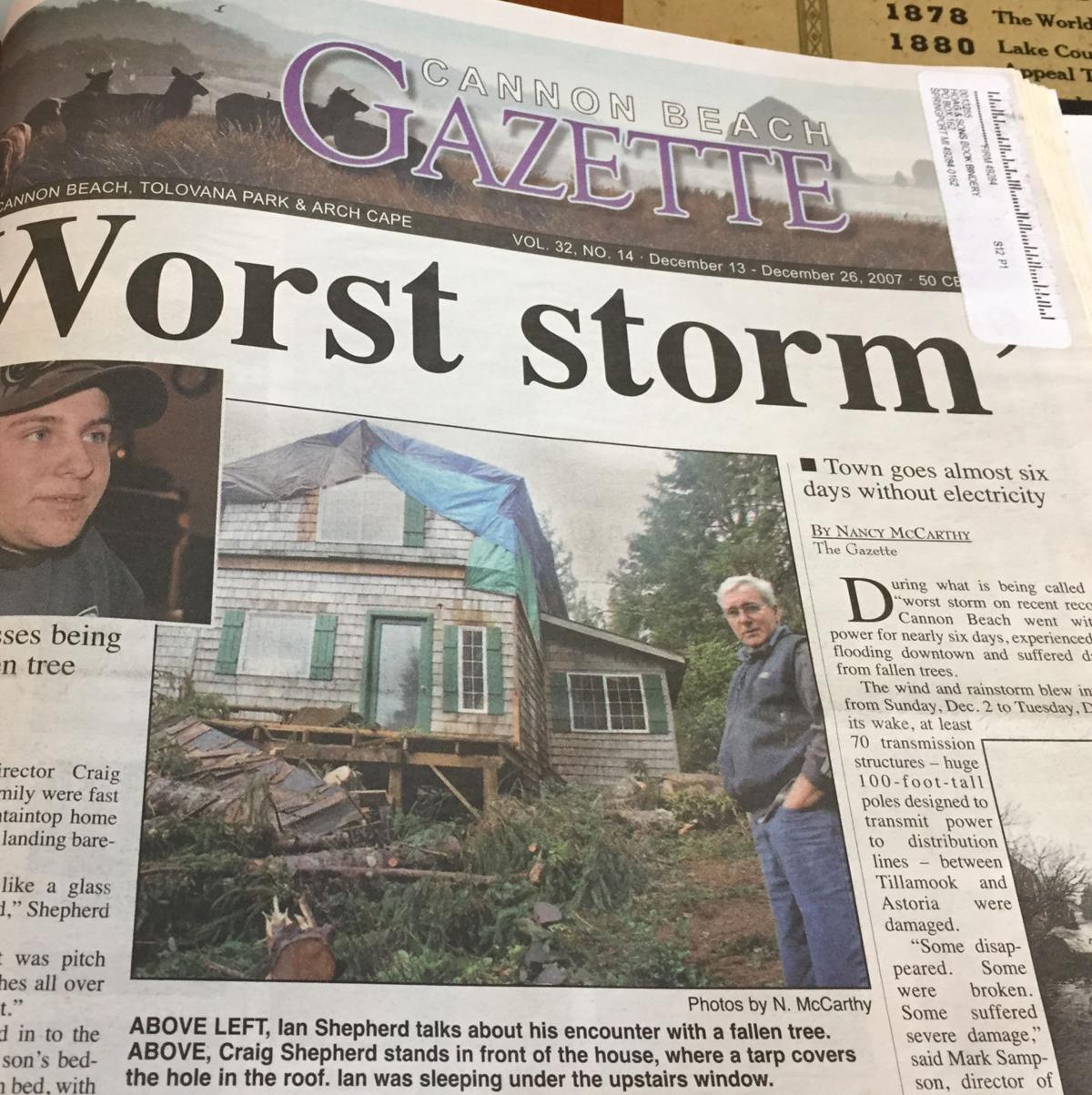 Headlines from the Gazette after the “Great Coastal Gale of 2007.” 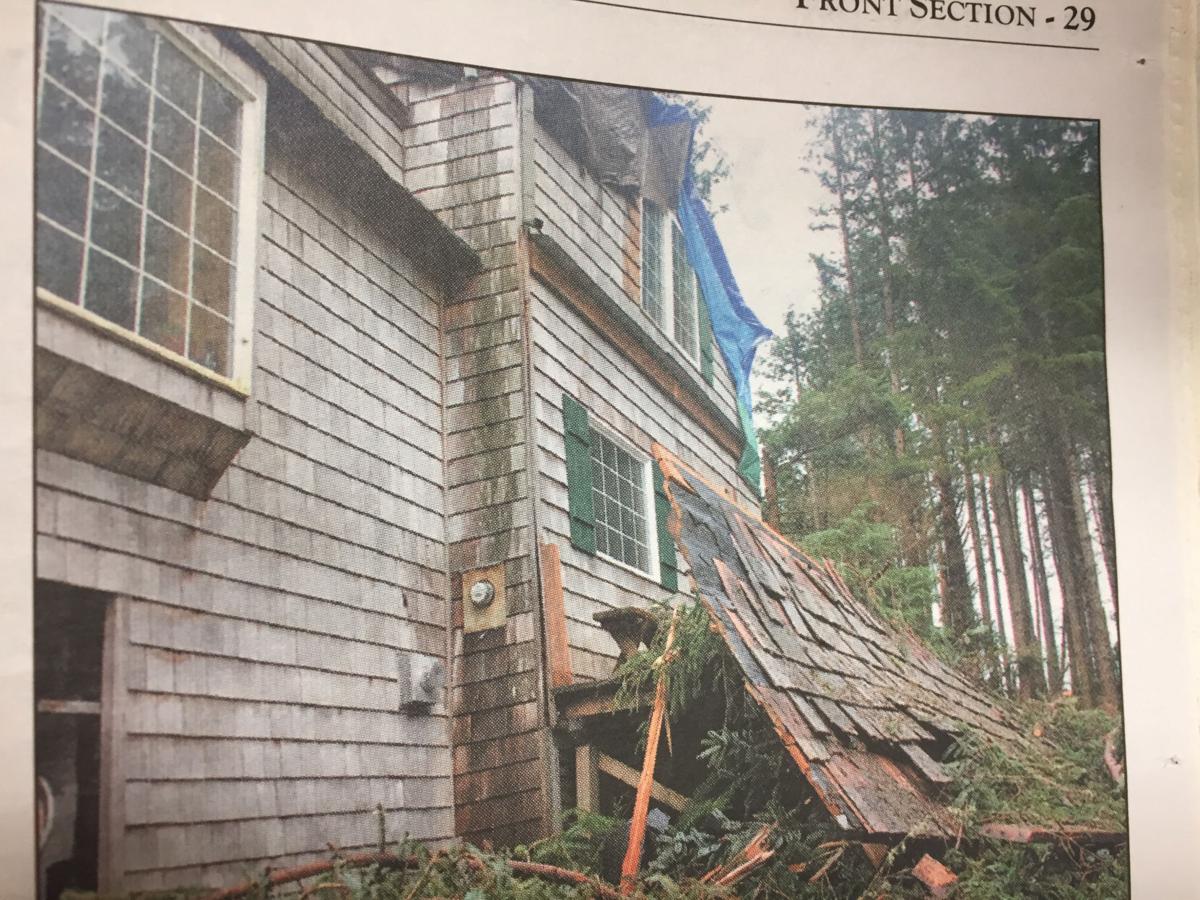 The Shepherd home was slammed by winds in 2007, trapping family members.

Headlines from the Gazette after the “Great Coastal Gale of 2007.”

The Shepherd home was slammed by winds in 2007, trapping family members.

My natural disaster moment was in 1999 when Hurricane Floyd rode up the Northeast coast. It came in on a Wednesday afternoon — our newspaper’s deadline was Thursday — and dumped 19 inches of rain on our small town in New York.

As the rain was bucketing down, our office, on a hill, overlooked a stone-and-masonry lot. The street — turned into a fast-flowing basin — was already too deep for a concrete truck to get through. The police scanner — we still had power then — scratched out stories of stranded motorists, downed wires and closed roads. I ended up spending the night in the office, sleeping on the floor, using a cardboard box as a pillow.

And yes, the paper did make its deadline.

Nancy McCarthy’s moment came 10 years ago. McCarthy, my predecessor as editor at the Gazette and now a city councilor, had moved to Cannon Beach full-time earlier that year. December 2007 was her first winter.

“I told myself if I could survive the first winter in Cannon Beach, I’d continue to live here. So, the ‘Great Coastal Gale’ became my test,” she told me this week.

“The ‘Great Coastal Gale’ was a euphemism for the hurricane we actually had,” McCarthy recalled.

The wind reached 120 mph in some areas of the North Coast.

“We didn’t have power for about six days,” McCarthy said. “I remember hearing that 72 transformers had collapsed all up and down the coast.”

Thousands of trees fell along the highway.

The wind and rainstorm blew into town for three days, from Dec. 2 to Dec. 4.

McCarthy recalled that there was no means of communication with the outside world for several days, until a ham radio operator from Seaside could get to Cannon Beach.

“City officials thought they could use their satellite radio, but that didn’t work, and the cell towers were down, and, of course, the landlines weren’t available,” she said. “The city couldn’t even communicate with county officials for a few days. That lack of ability to communicate came as quite a surprise to city officials.”

“It’s the worst storm we have on recent record that has hit our service area on the North Coast in terms of duration and distance,” Mark Sampson of Pacific Power said in the Gazette at the time.

More than 470 crews from all over Oregon and from as far away as Walla Walla, Washington, and Utah, worked to restore power from Tillamook to Astoria. Winds in Cannon Beach “only” reached 80 mph, significantly lower than the top gusts of 147 at Radar Ridge, west of Naselle, Washington.

What caused the most damage to trees, power poles and buildings were the sustained winds that started Sunday and didn’t end until Tuesday.

When a roof truss came crashing through the roof of the home of the family of Craig Shepherd — hanging perilously over 18-year-old Ian Shepherd — firefighters braved the high winds to clear debris.

Peter Shepherd, 16, and Julia, 13, scrambled down the home’s narrow staircase, filled with so much debris they had to jump from the stairs to the living room. They waited in a back hall under a door frame as the wind blew out windows throughout the house.

To get to the scene, firefighters had to cut through and remove three trees from Elkwood Mountain Road, where the Shepherds lived. Nearby trees snapped constantly while crews sawed through huge logs. “I felt like a sitting duck,” firefighter Matt Gardner said at the time.

After the winds settled and clearing of debris, McCarthy wrote on the editorial page. “Through the darkness, all of the stars shine here in Cannon Beach.”

She recounted example after example of human kindness.

Mariner Market stayed open and served coffee to drop-ins, while local restaurants provided free coffee and meals, she wrote at the time. The restaurants operated by Martin Hospitality — Wayfarer, Lumberyard, Stephanie Inn and Surfsand Resorts — brought meals to the Community Church. Bob Neroni and Lenore Emory of EVOO cooked a meal for volunteer firefighters as they made countless emergency runs.

Rose Mays and Cathy Willyard knocked on doors at Elk Creek Terrace to let residents there know about the community shelter at the church. In Tolovana Park, Bradley Linstedt joined with others to cut away trees blocking roads.

Restaurants and stores with perishable food were giving it away, McCarthy recalled. The owners of the Driftwood barbecued on the Driftwood deck. Everybody checked in with their neighbors. People brought meals to the church.

Like the valor and bravery we witnessed time and again at Hurricane Katrina, fighting wildfires, and this year’s series of natural disasters, it is these human stories we remember.

“I remember a neighbor of mine came over with a bottle of wine to see how I was,” McCarthy said. “We sat at my kitchen table in the dark, with only our headlamps on, drinking wine and talking into the night.”

The “Great Coastal Gale” had several lasting effects, but the major result was the wake-up call it sent to the cities and counties on the North Coast.

“It reminded us that the tsunami isn’t the only emergency we should prepare for,” McCarthy said. “In Cannon Beach, there was a huge push to create more preparedness committees, organize and train shelter volunteers, hire an emergency consultant, develop emergency plans and work with other cities and especially the county.”

In New York, in 1999, I remember similar scenes, including the dramatic rescue of a father and son from a basement filling with water while power lines remained live. The risks were as great for first responders as for those in the rapidly submerging waters.

The next night, as damage and debris was surfacing, I remember one particularly poignant moment. The rain was pouring and a house had virtually been washed away. But homeowner Larry Farrell was getting into his car, holding a trombone case. He might not have known how he was going to make it, but he was scheduled to play in the pit orchestra for a Broadway musical.

R.J. Marx is The Daily Astorian’s South County reporter and editor of the Seaside Signal and Cannon Beach Gazette. The Daily Astorian is preparing a 10-year anniversary special edition commemorating the storm of 2007. Please share your memories of the 2007 storm with us.