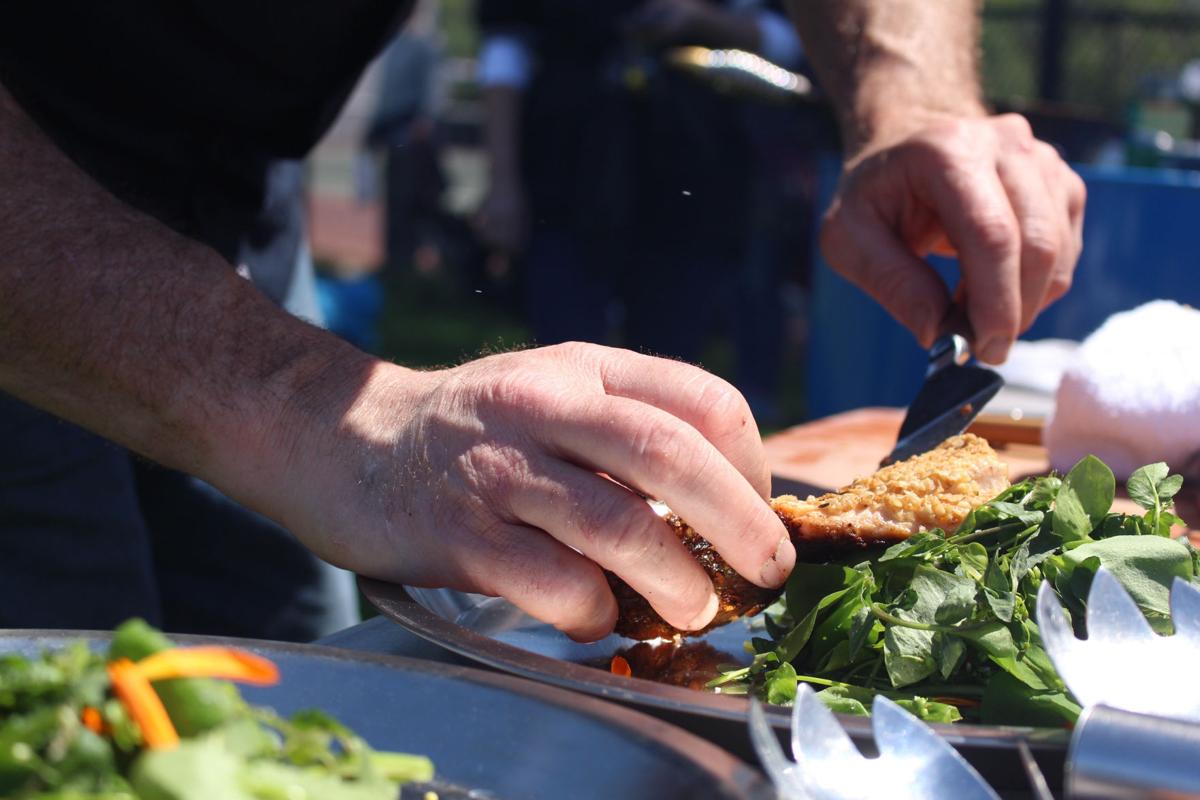 Will Leroux, brewmaster at Public Coast Brewing Co., plates a filet of trout for the dish he created. 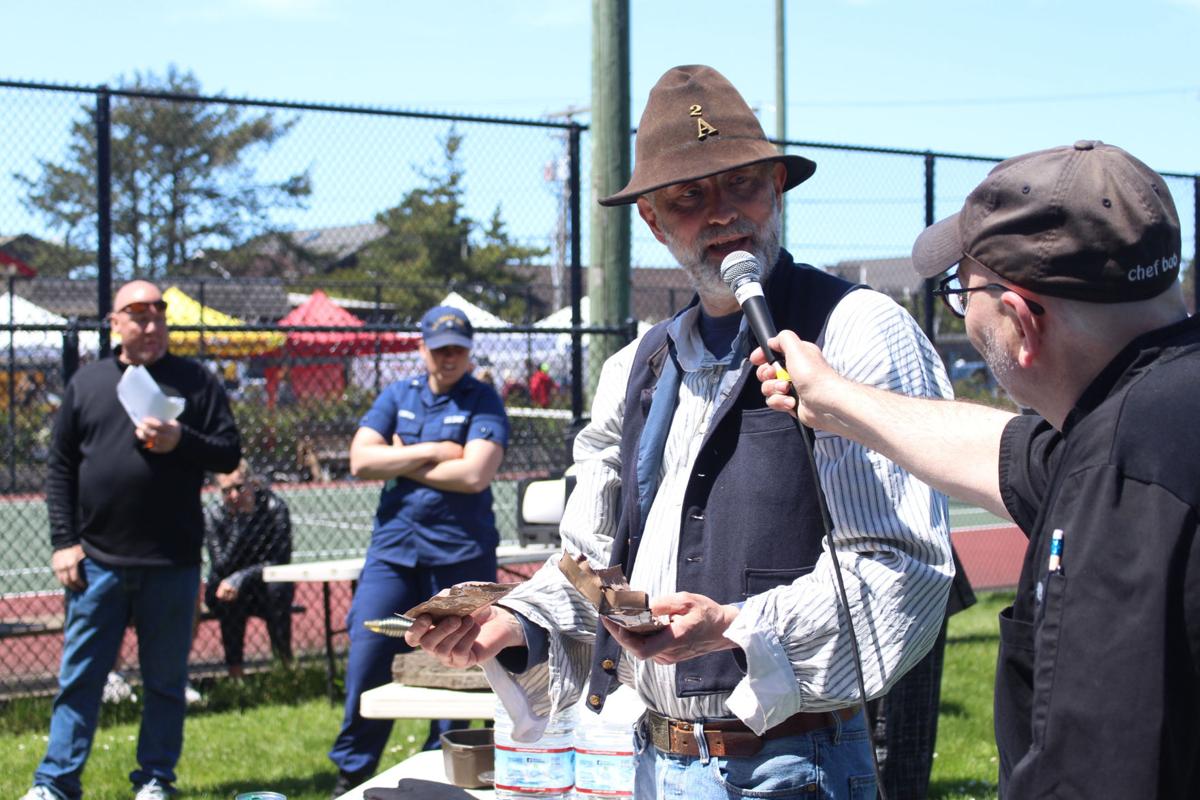 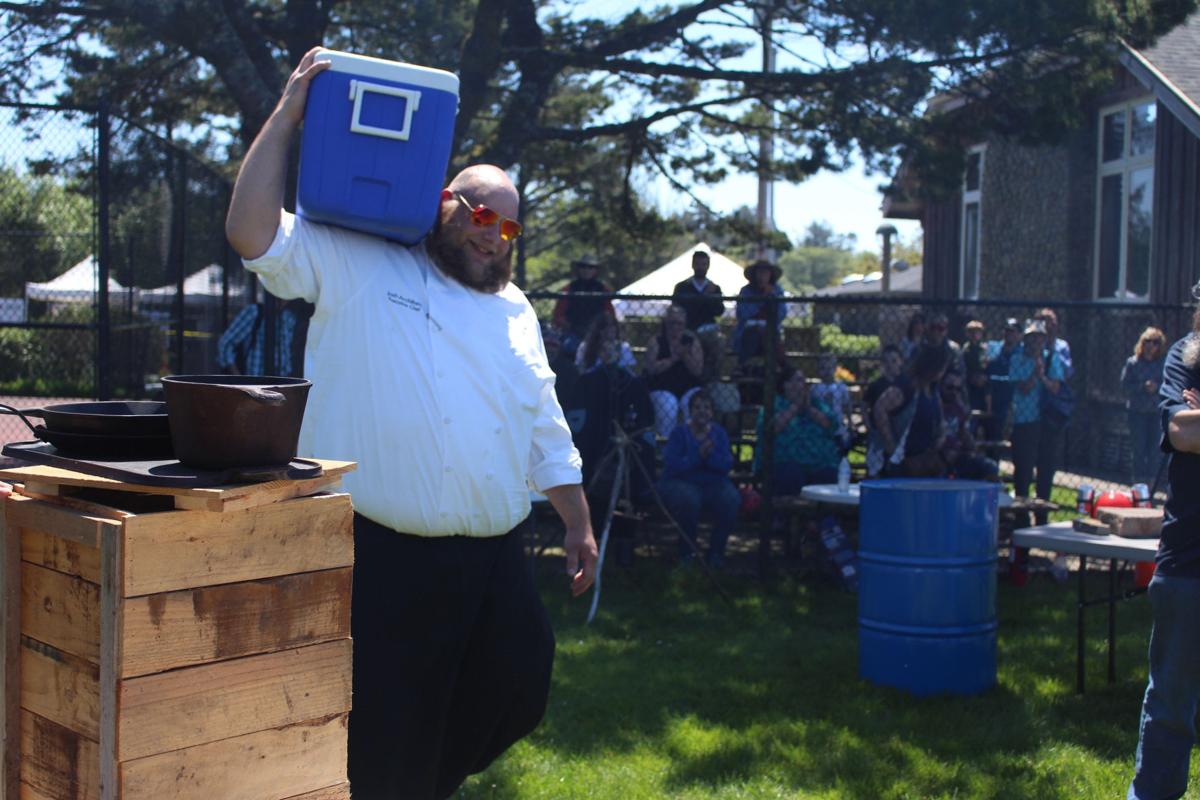 Will Leroux, brewmaster at Public Coast Brewing Co., plates a filet of trout for the dish he created.

If the Big One hits, make friends with the chefs.

Perhaps this wasn’t the lesson I was supposed to derive as a judge for the Blue Barrel Challenge on Saturday, but after tasting what could be made from just freeze-dried and foraged food by the right people, the competition showed me a post-tsunami Cannon Beach could be downright delicious.

The cookoff was part of a larger Coastal Community Festival in Cannon Beach, a first-time event which centered around promoting public safety and emergency preparedness. The actual message was to promote the importance of the blue barrel program, which encourages residents to store extra supplies — like food — out of the tsunami inundation zone.

The competition included three chefs: Will Leroux, the head brewmaster at Public Coast Brewing Co., John Sowa, reigning Iron Chef Goes Coastal champion and owner of Sweet Basil’s Café, and Mayor Sam Steidel, who, while not a professional chef, is known for his ability to cook with a cast-iron skillet during Civil War reenactments.

Each chef was given a pantry full of items that you would find in an average blue barrel — such as canned foods, MREs and boil-in-a-bag rice — as well as items that could be foraged for in the area, which in this case was rainbow trout and a variety of edible leaves.

For utensils? A cast-iron skillet, a wooden spoon and a Swiss Army knife.

Oh, and just in case that wasn’t difficult enough, it all had to be cooked over an open flame.

This was my first time ever judging a cooking competition — so please take all of my food critiques with a grain of salt. But as I tasted incredibly intricate dishes like quinoa-crusted trout and a corn salsa with MRE peanut butter, I couldn’t help but think about how well we could fare given enough tools and resources — and how many modern amenities (like regular knives and dishware) we take for granted.

Bob Neroni, owner of EVOO Cannon Beach Cooking School, organized the competition to try and drive home this point in a light-hearted way.

“The seriousness of (a tsunami) scares us. When you can bring a little levity to a serious subject, it’s easier to digest,” Neroni said.

In 2012, Cannon Beach became the first city in the county to institute the blue barrel program. They were promoted as a way to store and protect valuables out of the tsunami inundation zone. The program came out of some safety forums held after the 2011 Japan tsunami, when a passion for emergency preparedness was reignited. The barrels went in tandem with the town’s effort to establish general cache sites filled with critical medical and survival supplies.

There are about 60 different barrels stored across three cache sites ­— a solid number, but one that has stayed relatively stagnant since the program’s inception.

Mayor Sam Steidel saw the competition as a way of bringing the program back into the public eye.

“I looked at it as a good way to get the message out and have some fun at the same time,” Steidel said.

While Cannon Beach is far from the only community that has done work to relocate supplies and services out of the inundation zones, blue barrel programs are something specific to the Pacific Northwest.

“A go-bag is just a backup — what you would need if were truly left on your own. The barrel, on the other hand, should have blankets in there, personal mementos, so if your house is in the Pacific Ocean you still have those things,” Emergency Management Consultant Stacy Burr said. “It’s especially important here, with no-notice events like Cascadia.”

At the end of the day, the dishes made by Leroux and Sowa ended up tying for first place, with each getting a portion of the $350 raised during the event sent to the charities of their choice as awards.

Maybe not everyone can cook like professional chefs in a post-disaster world. But if this competition taught me anything, putting in a little more thought into emergency food storage can go a long way.

Brenna Visser is a reporter for the Cannon Beach Gazette and The Daily Astorian.