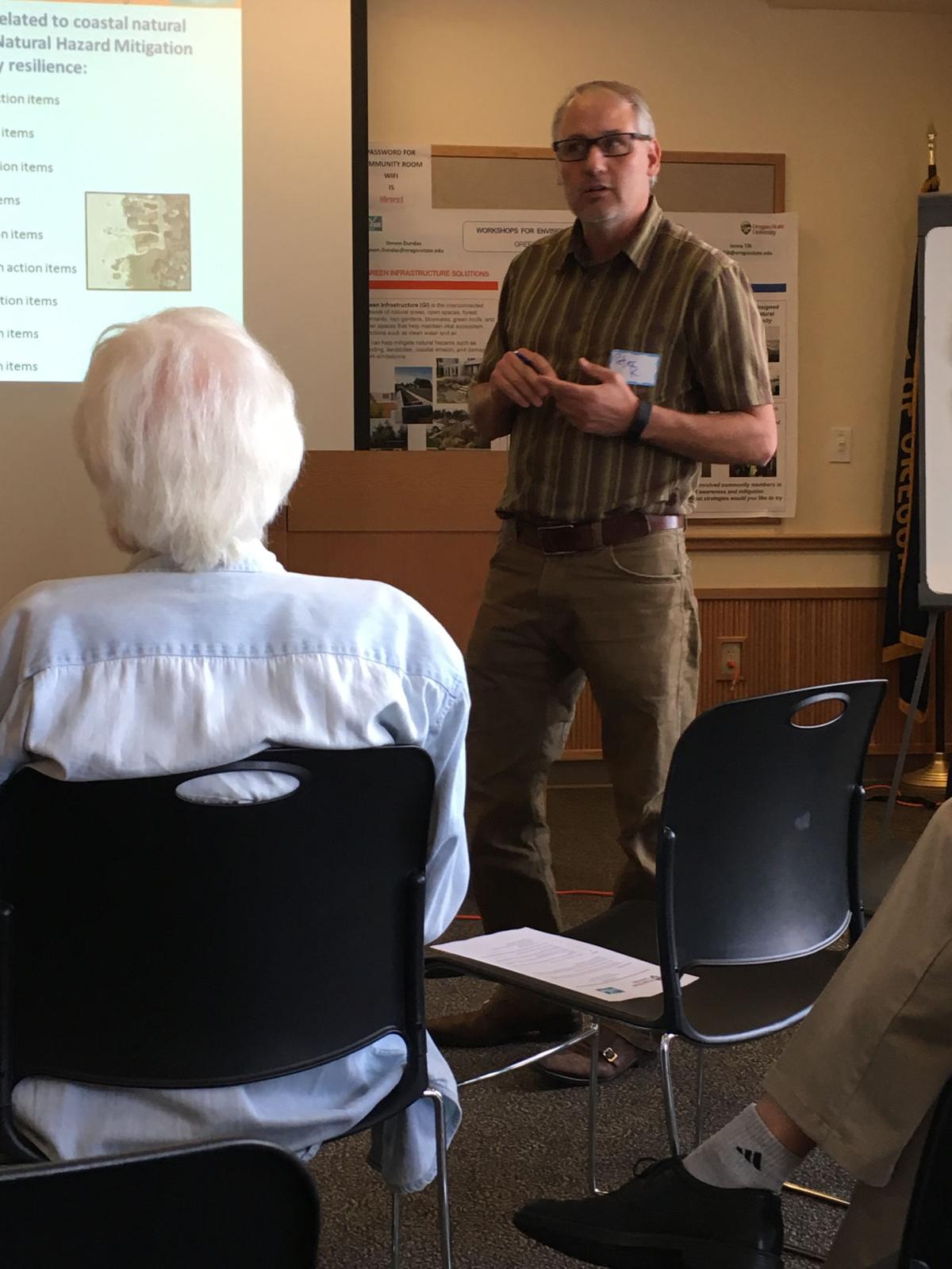 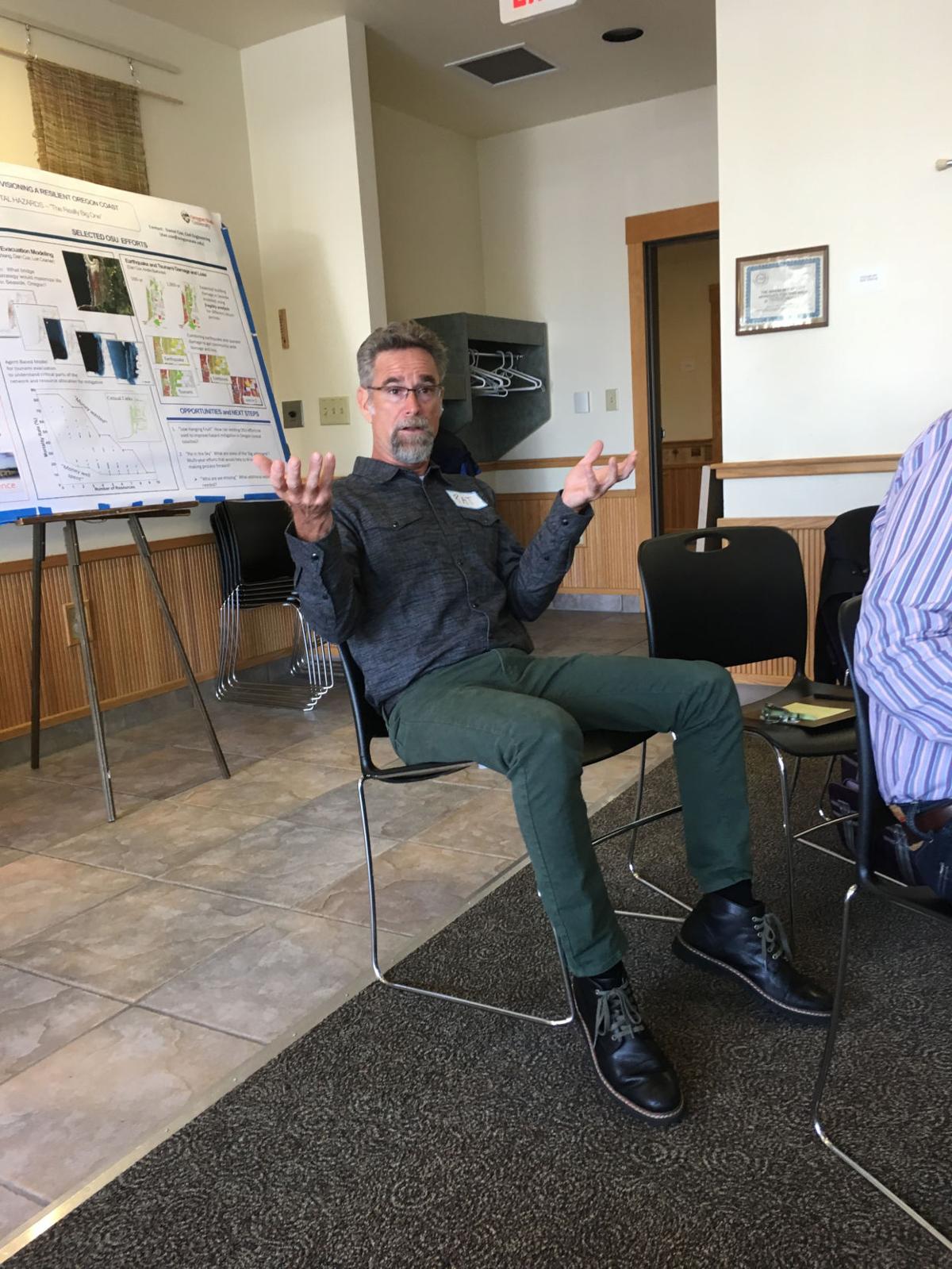 If there’s a way to demystify coastal resiliency, Oregon State University has found it.

We’ve seen results in signage, mapping and awareness through state programs like the Great ShakeOut and “Two Weeks Ready,” which aims to inspire citizens to be self-sufficient for two weeks in the aftermath of a major disaster. A new survey is headed to a cross section of Seaside residents to develop a better understanding of perceptions and preparedness toward a Cascadia Subduction Zone event.

We know that when the Big One hits it could bring a 9.0 earthquake and waves from 30 to 120 feet high. Our bridges could collapse and our cities flood. Mass casualties would almost be a certainty.

“In Japan they don’t need to be convinced,” Corcoran said.

Corcoran described attendees as “researchers from OSU, students, agency folks and planning commission types — the usual suspects who want to think their way through problems.”

They are the “right people” to have in the room when thinking about resiliency, Oregon State Professor Peter Ruggiero said, matching university skills with a target audience.

Ruggiero and others are seeking seed money via an Oregon Sea Grant, which provides grant opportunities related to the marine environment.

Researchers seek to connect “the kind of things we are interested in and the things coastal communities have identified as significant priorities,” Ruggiero said.

“We are talking about before and after the event,” Patrick Wingard, of the state’s Department of Land Conservation, said.

Research projects could address elements of all of these, Wingard said.

The goal, Wingard said, is to provide elected officials with the information and resources needed to resolve the coast’s complex hazards, even when long-term answers are more costly than the quick fix.

“Let’s dig deeper,” he said. “We could do more looking forward and thinking about the long range consequences of our short-term decisions.”

The process involves “a bit of matchmaking,” Corcoran said.

At the library workshop, some of that matchmaking unfolded as city officials interacted with university academics on issues of interest to both.

Cupples suggested a multihazard approach, taking into account not only preparation for a tsunami and its aftermath, but for wind and rainstorms — “the things we have all the time,” he said.

Brown said the county was still “in the first 12 hours” of a catastrophe and needed to look to longer-term recovery.

“What about the 1,000 people on the hill that don’t have shelter?” the emergency manager asked. “We have so many unanswered questions about that phase.”

“Resiliency” is one of those words newspaper editors and TV news channels hate, neutering truly terrifying concepts in a cloak of slick jargon. Others are phrases like “infrastructure solutions,” “robust facilities” and “natural hazard mitigation.”

During the school district’s tsunami awareness campaign a few years back, earthquakes and tsunamis were referred to by “T-shirt sizes”: M, L, XL and XXL for example. I found that a little more graphic and easier to grasp.

It’s not a game and all the big words in the world can’t disguise the disastrous potential of a Cascadia event.

One takeaway from the Seaside workshop is the growing sense by people to be strategic and proactive regarding hazards.

“This is about local people who want to work with us,” Corcoran said. “As a land-grant university, we want to address local needs. To the extent where our research can align with community needs, this is a home-run for us.”

Whether it has the sex appeal or the catastrophic sense of a disaster movie is another story.

Let’s hope that’s not what it takes to get some action.