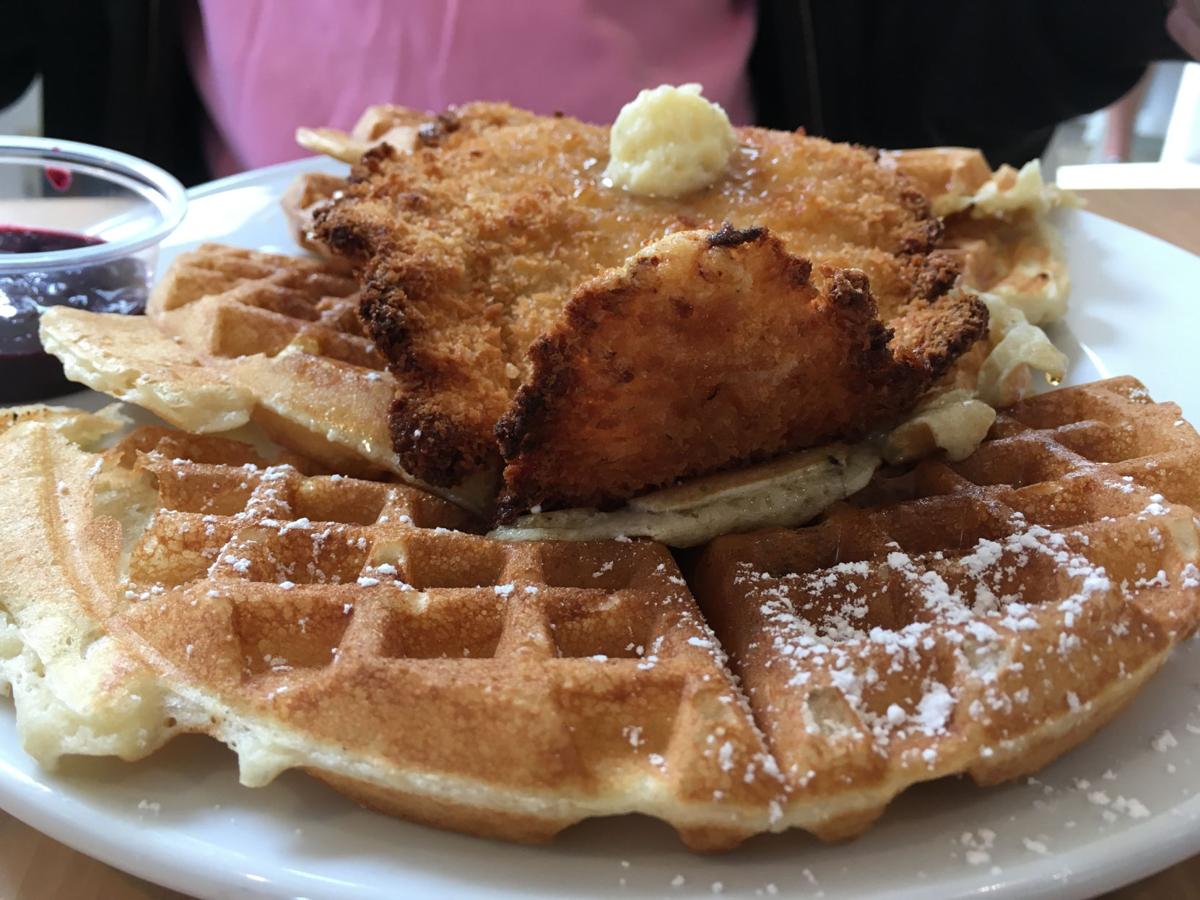 Chicken and waffles at Surbird. Yum! 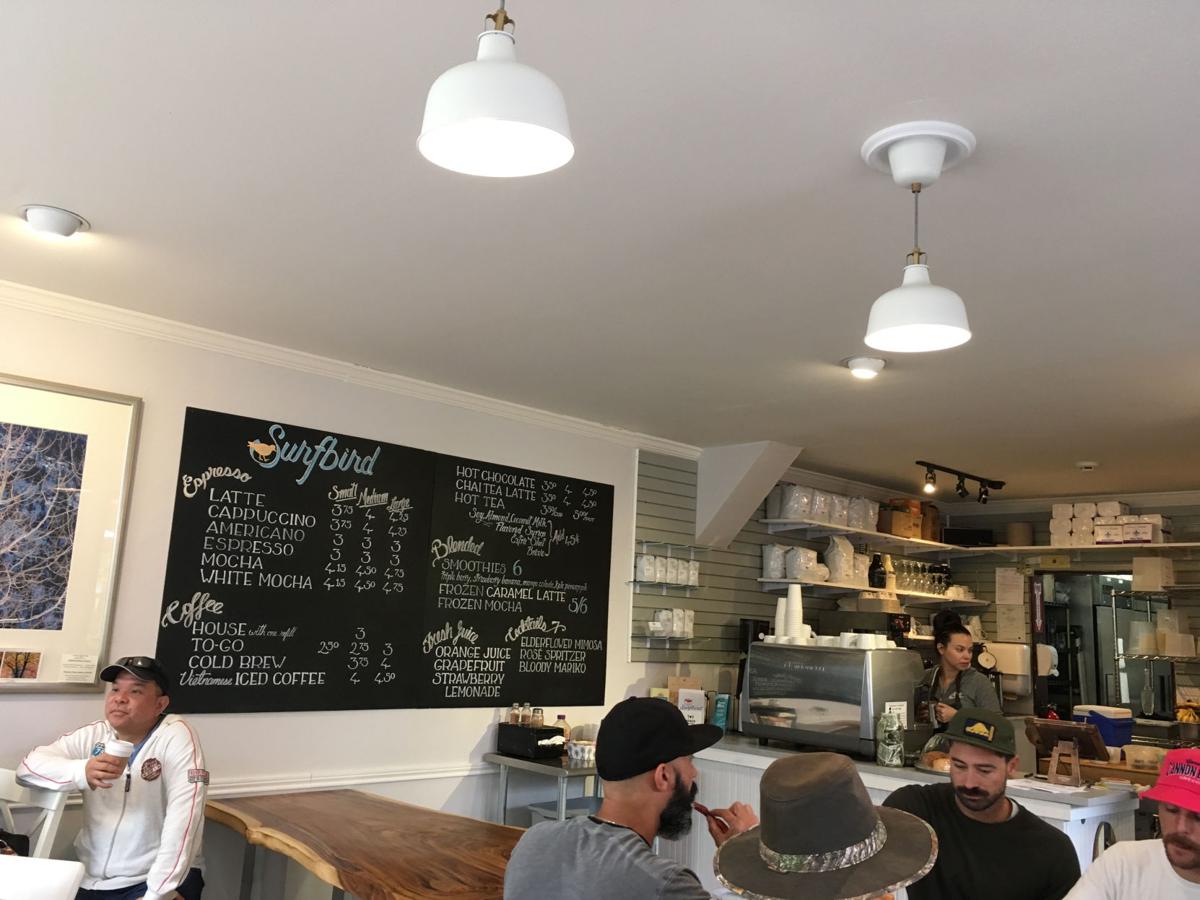 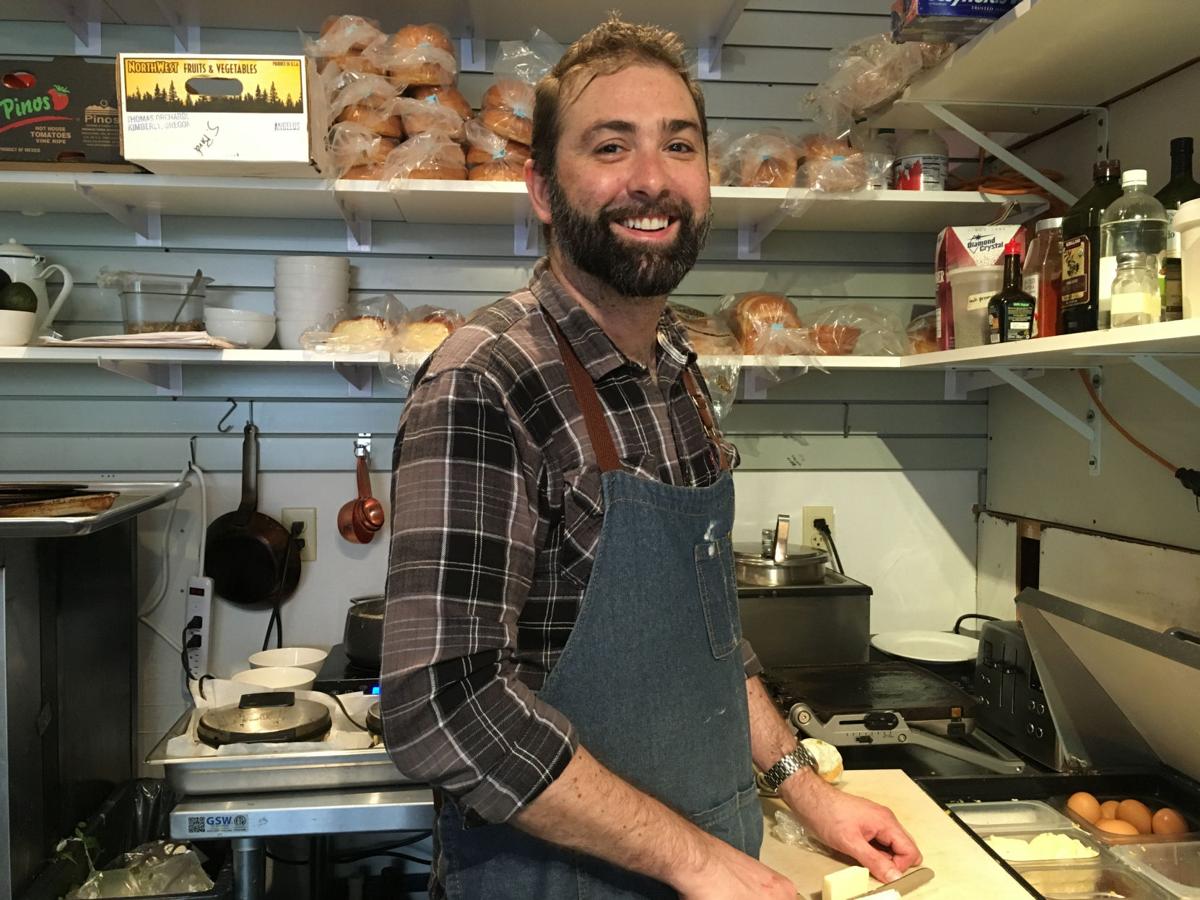 Chicken and waffles at Surbird. Yum!

We were in the Osprey Café in Seaside, one of our favorite daylight haunts. There are a lot of tempting items on the menu, but I’m pretty down with the avocado toast and the house made granola with fresh fruit and yogurt, or, as was true today, a cup of their outrageously thick and delicious Hungarian mushroom soup. We discovered the Osprey several years ago and have been semi-regulars ever since.

Josh Bokish, the owner/chef was in the house today and he stopped by our table for a chat. We joked we were taking a break from our patronage at Surfbird, his new(ish) restaurant located at 231 N. Hemlock St. in Cannon Beach.

We’ve been to Surfbird twice since it opened early this summer in the space that used to be occupied by Bella Espresso. The room, which always felt to me dark and hemmed in, is now a beautiful, naturally lit, modern space. Josh and Jasmine, his romantic partner, said as soon as they saw the space they began imagining. What they imagined seems almost Swedish in design, at least to me. You order at the counter from an abbreviated but excellent menu that has a lot in common with the menu at the Osprey and then your food is brought out. This is only a sampling, but they have biscuits and gravy; avocado toast; bacon and brioche egg sandwiches; grab and go sandwiches; Caesar salad. There’s always clam chowder and a soup of the day. Hours of operation are 7:30 a.m. to 3 p.m., just like the Osprey.

The first time we went to Surfbird, Mr. Sax as I call him, had the chicken and waffles. It was the best rendition of the classic pairing I’ve seen in ages, a beautiful filet of free-range organic chicken sat on top of an artisanal yeast waffle. It was neither too large, too small, or overwhelming. Mr. Sax devoured it in about two minutes. I had the granola parfait which I was a little disappointed was served in a plastic cup and not an old-fashioned parfait glass, but what the heck. In the cup it’s a healthy, easy thing to take on the run if you’re headed to the beach or the office.

On our second trip, we both had the baked french toast, which was also perfect and delicious and served with real maple syrup. I ate mine in about two minutes, which gave me plenty of time to survey the pretty room and gorgeous light fixture hanging from the high-ceilinged part of the dining area where they put in a terrific skylight. It was a weekday morning just before Labor Day and Surfbird was filled to capacity with attractive couples and their beautiful children. Surfbird does not have a specific children’s menu although for smaller appetites they do have fresh fruit and some baked goods and handmade biscuits and butter.

My husband asked Josh how it was going running two restaurants. He said he’d had a busy summer and that he was glad to see he was getting lots of thumbs up from Cannon Beach locals who are enjoying Surfbird. He said he’d moved one of his cooks from the Osprey full time to Surfbird, and that just this week he was starting winter hours for both places, which means closed Tuesday and Wednesday.

I’m pretty sure Surfbird will become one of our favorite places to enjoy breakfast and lunch. Of course I’ll have to divide my time there with the Osprey. It’s really a glut of good fortune to have amazing breakfast places in two towns.