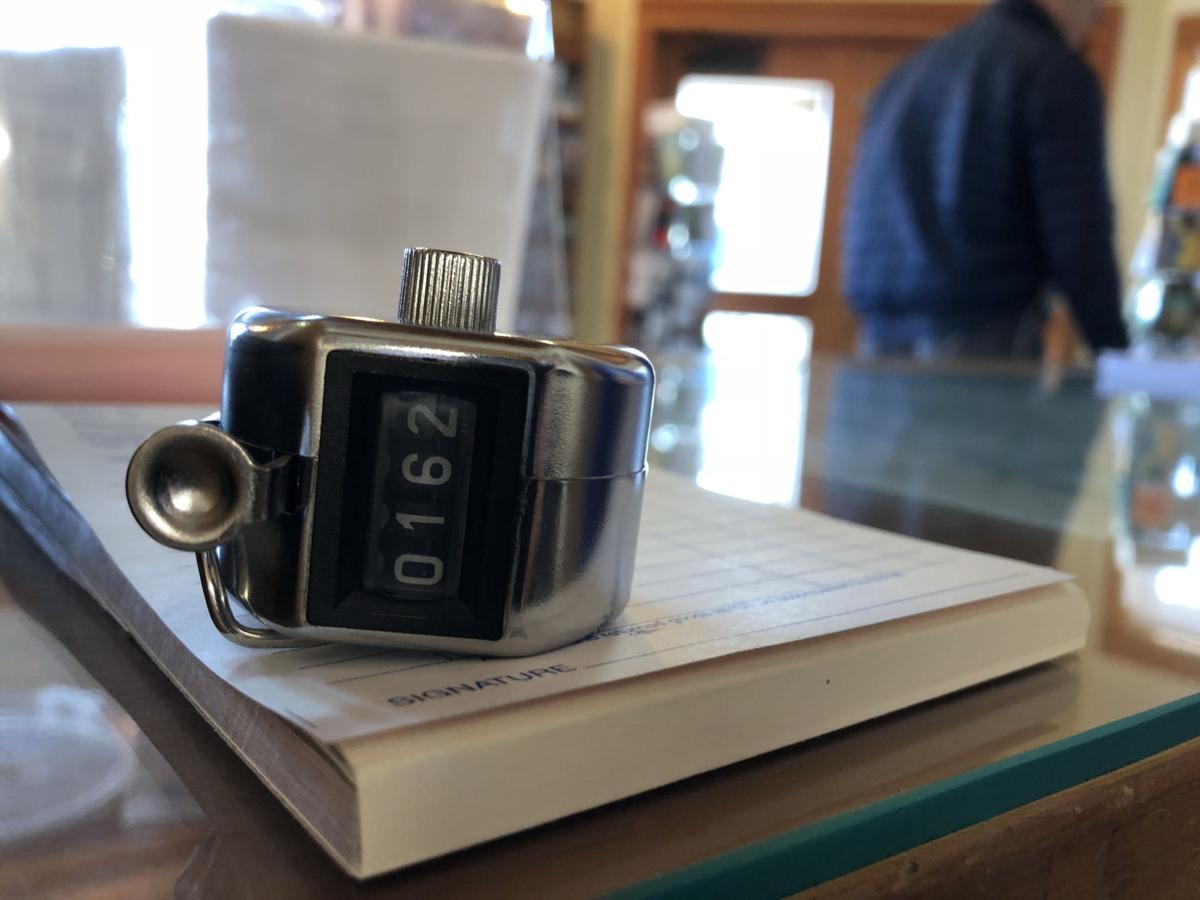 By midafternoon, more than 160 people had strolled into the Visitor Information Center to ask questions about Cannon Beach. 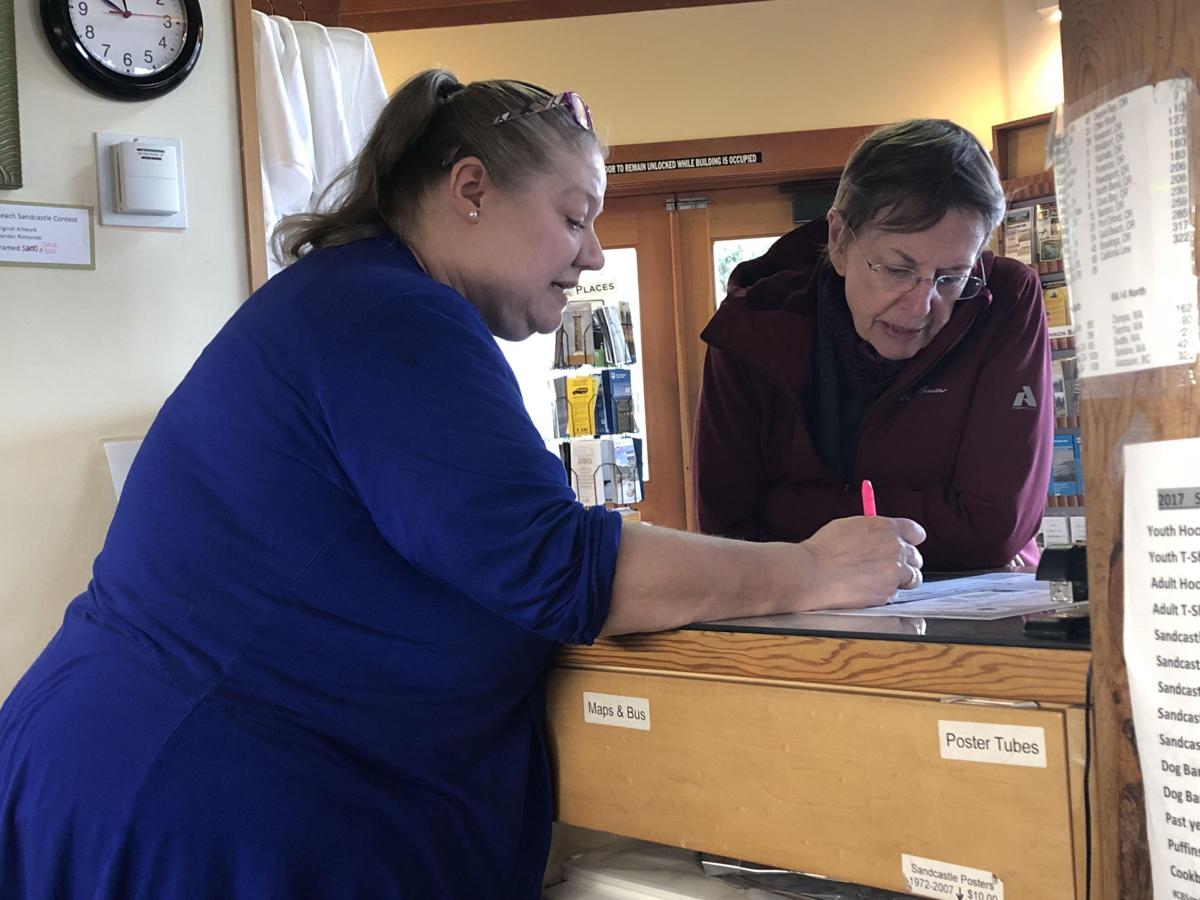 Laura Kaim, the supervisor of the Cannon Beach Visitor Information Center, helps a tourist find her way through town.

By midafternoon, more than 160 people had strolled into the Visitor Information Center to ask questions about Cannon Beach.

Laura Kaim, the supervisor of the Cannon Beach Visitor Information Center, helps a tourist find her way through town.

As Oregon Coast residents, we hold certain truths to be self-evident. In Cannon Beach, these can include – but are not limited to – knowing about Haystack Rock, traffic gridlock in the summer and always being skeptical of a weather report.

But what truths are evident – and not so evident– to the tourists who walk into the Cannon Beach Visitor Information Center at the height of summer?

In the age of apps, Yelp reviews and social media, I couldn’t help but wonder what questions were left on the minds of those 42,000 people by the time they entered city limits. What questions does the firsttime visitor have, and what does it take for the staff to field them?

To find out, I shadowed center supervisor Laura Kaim and spent a day in the life at the Visitor Information Center. Here are some observations:

This is by far one of the most popular questions asked, only coming second place to “Where’s the beach?” By 1 p.m. on a recent Friday, both of these questions were asked almost 20 times.

Known as one of the most recognizable landmarks on the Oregon Coast, it seems odd for someone to lose track of 235-foot rock.

“If you’re driving south and take the first exit, you can see the rock poking up above the trees,” Kaim said. “But once you get into downtown, it disappears.”

Given the fact the Visitor Information Center is only two blocks from the beach, on the surface it may seem peculiar how often Kaim has to give directions to the iconic rock. Part of the confusion may be that there aren’t signs anywhere pointing to the beach in downtown.

Other questions Kaim didn’t expect to answer as often as she does are mostly related Cannon Beach’s natural wonders. Many ask the difference between low and high tide, how to find a tide pool and about how to find the area’s notorious elk population.

“I usually tell them they weren’t kind enough to give me their schedule for the day,” Kaim said. “But I did have one person ask me if the elk in the city park were wild. I think she thought they were the city’s.”

In the age of the internet, it would be easy to assume that visitors have Googled near everything they need to know about the town before even arriving.

This is rarely the case.

“People will come in saying someone told them they just had to come to Cannon Beach, but told them nothing else about it,” Kaim said.

In visitor center-land, there are two types of vacationers: those who plan, and those don’t.

For the latter, the information center does its best to accommodate by keeping a constantly updated list of available rooms and campsites for those strolling into town, thinking a reservation is not necessary in the summer.

On Friday, there were fewer than 30 rooms left in town for the weekend. Most were taken by the end of the day. Often, Kaim has to be the bearer of bad news for families that had the misconception they could camp on the beach or in town.

“To assume is vacation doom, as I say,” Kaim said.

For the planners, the center serves a different purpose: to offer local perspective.

“Most people are wanting the firsthand, local knowledge, not something you could easily find with a search online,” Kaim said. “It’s not just ‘Where should I go to get to fish and chips?’ It’s ‘Where would YOU go to get fish and chips?’”

Unfortunately, this is probably the most difficult question Kaim faces.

“Because I don’t eat fish and chips or clam chowder,” Kaim said. “But I tell them everywhere in town (that) sells it, and food for people like me who don’t eat it.”

Fielding the wide array of questions that comes their way takes a balance of humor, patience, and every so often, some creative communication techniques.

With international tourism on the rise, it’s increasingly common to see tourists whose first language is French, German or Japanese.

“I really wish I would have taken some German or French in school,” Kaim laughed. “But between hand gestures and maps we get by.”

No matter what language the question is formed in, finding a way to creatively answer similar questions dozens of times a day is a challenge – but one Kaim looks forward to taking on daily.

“We like it to feel like we’re telling you this information for the very first time,” Kaim said.

Sometimes that means instead of describing how far Tillamook Head Lighthouse is from the shore, Kaim just tells people you can only get to it with wings, fins or a friend in the U.S. Coast Guard – a line she uses multiple times a day.

“Sometimes I feel like I’m practicing a standup comedy routine, but no matter what, I like to keep it light,” she said.

Almost 240 visitors later, Kaim called it a day. No matter how repetitive questions may be, getting the chance to help and share the stories of the North Coast with new people every day makes this the most fun job she’s ever had.

“If at least one person says ‘That was helpful, then the day was successful.’”