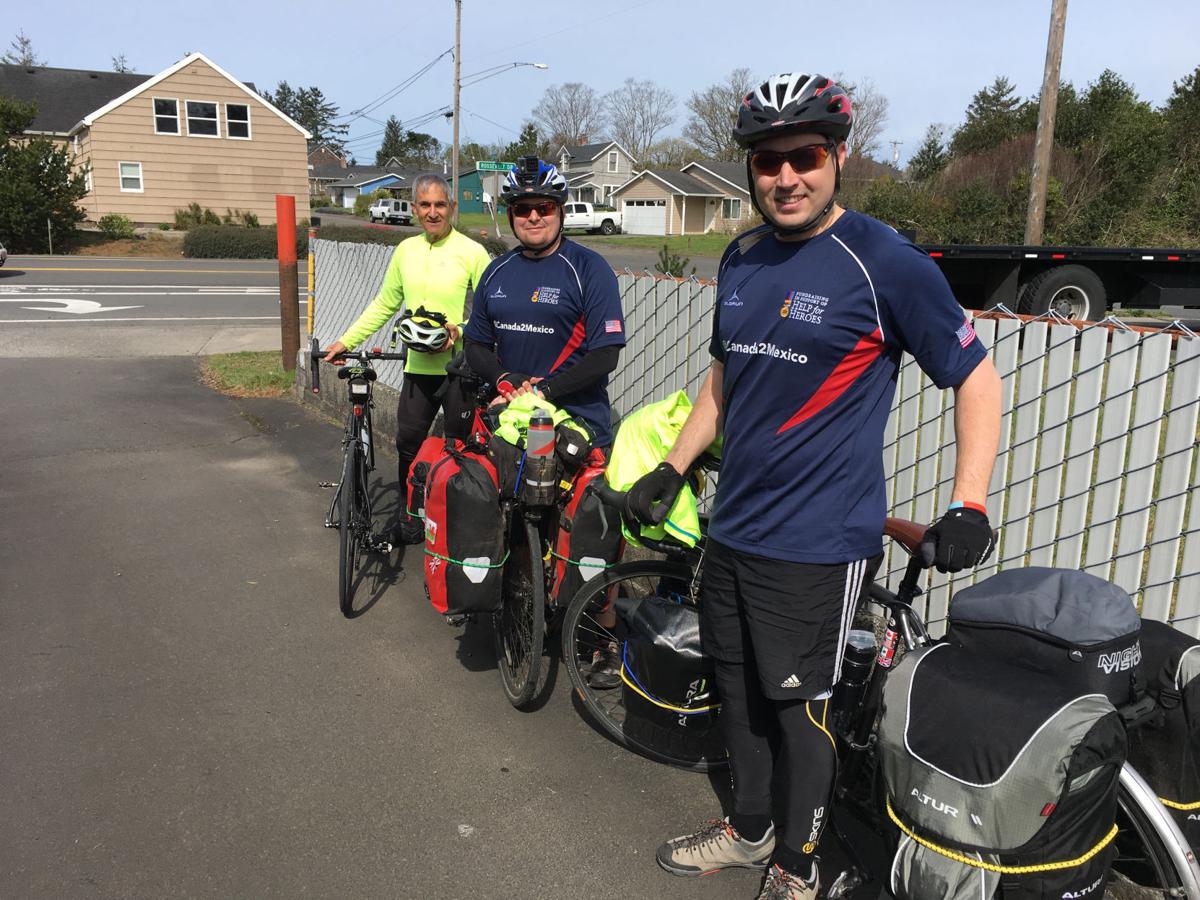 Tom Dideum of the local bicycle group, Old Spokes, left, with Wes Craven and Sam Jack on a stop as they ride along the coast. 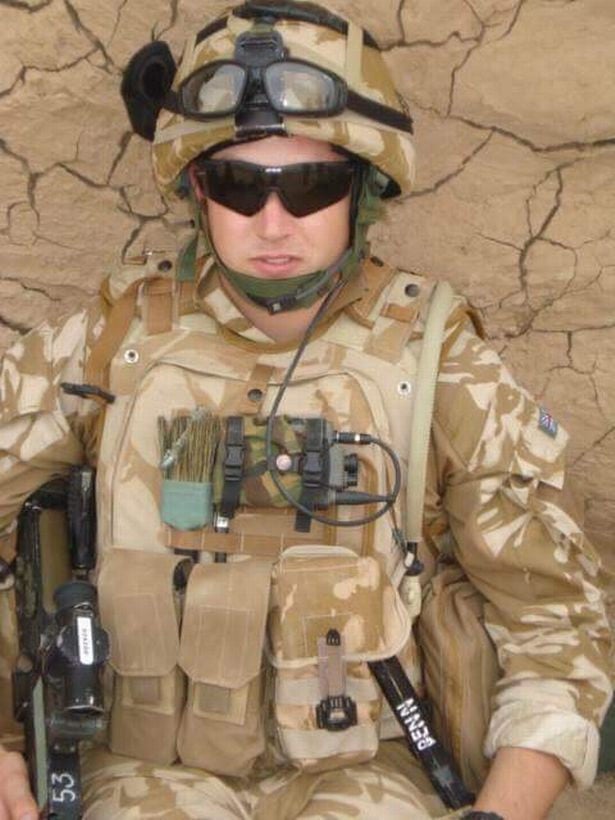 Tom Dideum of the local bicycle group, Old Spokes, left, with Wes Craven and Sam Jack on a stop as they ride along the coast.

They told me the sun came out as soon as they crossed the Washington state border into Oregon. What a fitting metaphor for two angels on bicycles — burly Union Jack angels — but angels nonetheless.

Sam Jack and Craig Craven — he goes by “Wes,” like the horror film director — were among the British who fought the Taliban in Afghanistan.

Craven, 34, married and the father of two, is from Wales. Jack, 31, is from north London. They arrived on the North Coast this spring as part of a cycling tour from Vancouver to San Diego. The mission is to support Help for Heroes, a British counterpart to America’s Wounded Warrior Project, a group Jack knows well.

Craven and Jack served together in the Royal Engineers bomb disposal unit. Familiarly known as “sappers,” the teams provide essential support to all areas of the British Army in peacetime and on operations.

Over the course of their military careers, Jack and Craven served in Iraq, Afghanistan, Bosnia, Kosovo, Germany, Cyprus and Canada.

Craven spent 10 years on duty in Afghanistan. Jack did five, until 2010, when he took a round to the head. A bullet went in through Jack’s eye and around to his brain, about a millimeter away from the brain stem.

Initially, doctors gave Jack only a 10 percent chance of survival.

Of Jack’s fighting team of 120, 12 others were injured and one died.

Jack was hospitalized for three months; rehabilitation extended for three years. “That’s when Help for Heroes took over,” he said.

Help for Heroes is credited with helping more than 17,000 veterans. “Together, building lives,” is their motto.

Founder Bryn Parry served for 10 years in the Royal Green Jackets before leaving the military in 1985 to become a cartoonist, a career he maintained for 23 years.

In 2007, Parry and his wife Emma met wounded vets in an Afghan military hospital, inspiring the couple’s mission to help those with injuries and illnesses attributable to their service in the British Armed Forces. Help for Heroes runs four recovery centers in England.

Through the organization, wounded veterans participate in the annual Invictus Games, where athletes from 18 countries compete in 10 different sports — including bicycling.

Because of the support he received from Help for Heroes, Jack decided he wanted to give back to the organization.

After “too many beers” one night, Craven proposed the ride across America.

Craven didn’t own a bicycle, much less have experience in bicycle maintenance.

“We didn’t even know how to change a tire,” he admitted.

They contacted a local British cycle shop for a “massive maintenance day.”

Planning was relatively simple: “We booked our first nights in Vancouver and our last two nights in LA,” Jack said.

Then the hard part began.

“This a massive challenge for us both as we don’t normally cycle, never mind cycle touring,” Craven said. “Especially for Sam. His injury knocked his confidence. I’m hoping that this trip will show him and other people with injuries that they are still capable of amazing things.”

The ride is self-funded, with a strict budget of about $34 per day for food and accommodation for the 45-day trip.

Jack, who had been advised by his doctors not to join a fundraising expedition to Mount Kilimanjaro, didn’t even consult his physician this time. “I didn’t want the answer. I kept this one to myself.”

As they planned their tour, Jack and Craven reached out to contacts in America, including Seaside’s Al Smiles, who subsequently introduced them to Gearhart’s Tom Dideum, of the local biking group Old Spokes.

The group provided logistical and moral support, Dideum said as he accompanied Craven and Jack on their leg from Seaside to Cannon Beach. “What they’re doing is pretty amazing.”

With a shoestring budget, the cyclists are “relying on the kindness of strangers, really,” Craven said.

So far, they have found assistance from police, fire, military veterans and “all-round good people” in the course of their ride.

In Raymond, Washington, they’d been washed out for days. After making a call, they found lodging in a local pastor’s house.

Their stay began with a birthday party for a 4-year-old, with 20 young guests, a celebration followed by the milking of a cow.

Craven said he is “pretty sure” Washington state is the hidden land of Atlantis.

“It never stops raining,” he said. “We come into Oregon and literally the sun shines.”

As the bicyclists prepared to head down the coast, they welcomed the challenges ahead.

“Yeah, we’re stubborn enough to do it,” Craven said as he donned his helmet, preparing to head south along U.S. Highway 101.

“The good news is once you get over the hill at Neahkahnie Mountain, it’s all downhill,” Dideum said.

Jack and Craven said they hope to cover 50 miles a day, sightseeing along the way.

As we read headlines this week, the ride of the two British veterans reminds us of the painful toll of war, not only of lives lost, but those on the road to recovery.

Two suicide bombings in Kabul killed 25 people, among them, 10 journalists. About 14,000 American troops remain in Afghanistan, a conflict in its 17th year. Those stationed there — American, British or international — risk their lives daily for our safety.

“Not a day goes by that I haven’t thanked God for keeping me alive and giving me this second chance at living,” Jack said.

As of this writing, the cyclists have raised more than twice their funding goal.

To provide support, visit justgiving.com; search for “Canada to Mexico: the long ride down.”