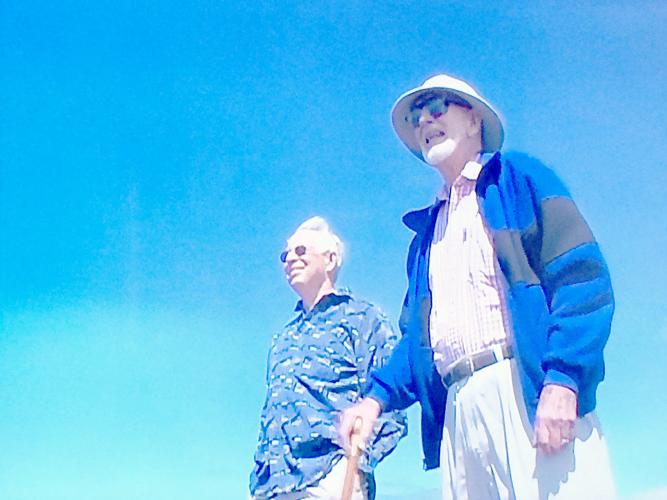 Lawrence Bitte (left) and Bob Bacon (right) take a stroll on Gearhart Beach between 2007 and 2008 for the documentary film “Politics of Sand.” 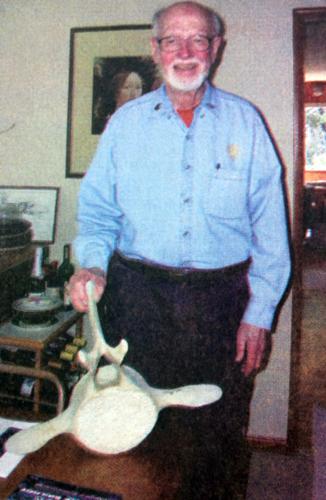 The late Dr. Bob Bacon poses with a vertebra of a California gray whale inside his home overlooking Gearhart beach in April 2005. 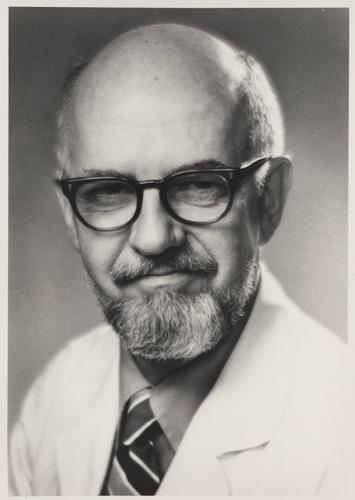 Robert L. Bacon, Ph.D., professor emeritus of anatomy at the University of Oregon Medical School from 1955 to 1988. 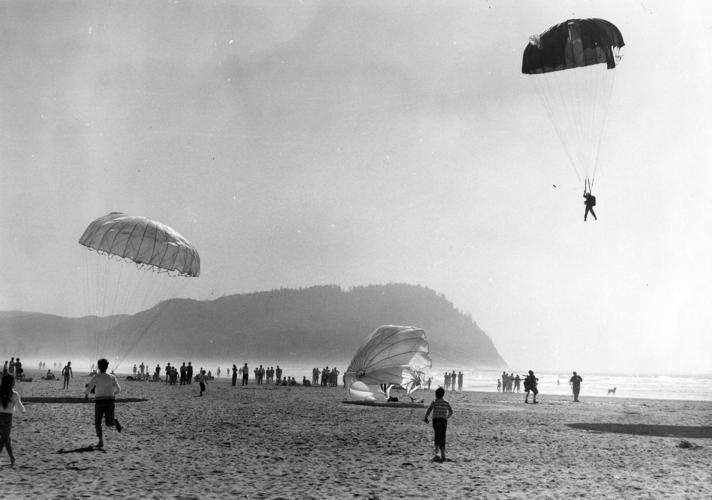 Prior to the state passing the Oregon Beach Bill in 1967, the state's prime recreational area was in danger of exploitation by private interests. Here, beach goers enjoying a parachuting exhibit on the beach at Seaside in 1963.

Lawrence Bitte (left) and Bob Bacon (right) take a stroll on Gearhart Beach between 2007 and 2008 for the documentary film “Politics of Sand.”

The late Dr. Bob Bacon poses with a vertebra of a California gray whale inside his home overlooking Gearhart beach in April 2005.

Robert L. Bacon, Ph.D., professor emeritus of anatomy at the University of Oregon Medical School from 1955 to 1988.

Prior to the state passing the Oregon Beach Bill in 1967, the state's prime recreational area was in danger of exploitation by private interests. Here, beach goers enjoying a parachuting exhibit on the beach at Seaside in 1963.

July 6 marked the 50th anniversary of the 1967 date when then Oregon Gov. Tom McCall signed HB 1601 into law, establishing Oregon’s coastline and its beaches as public land for all people to enjoy.

Though accolades mostly benefited McCall, State Treasurer Bob Straub is also known within the ranks of HB 1601 supporters. But, little recognition is given to the lesser-known men and women who were part of Oregon’s Legislature, committees and organizations to save Oregon’s beaches from land sales and privatization.

There was Associated Press reporter Matt Kramer, whose articles, which appeared in almost every newspaper in Oregon, kept the public abreast with the ongoing, and often heated, battle over Oregon’s beaches. It was Kramer, who coined HB 1601 the “beach bill” through his reporting. And, Gov. Oswald West set the stage for being the first governor to start the process of keeping Oregon’s beaches public by getting his 1913 bill passed.

Yet, when Oregon became a state in 1859, its belief was that what the state owned, the state could sell. In 1872, the Legislature authorized the selling of dry-sand land to private citizens. However, controversy and concern grew within the state since the beaches were an important form of coastal transportation from north to south along the coastline. Therefore, in 1899, the Legislature declared the beach land from the Columbia River to the south border of Clatsop County a public highway.

Not to downplay Govs. West’s and McCall’s defining moments to have the foresight to protect Oregon’s beaches for future generations — the beaches had already set a precedent for being a recreational playground and there was, of course, the doctrine of customary rights — and both governors were known to be proactive environmentalists of Oregon’s natural landscape.

Still, there was one other. A man who was a driving force and key to starting the legislative process in saving Oregon’s beaches against burgeoning abuse and misuse by developers and property owners. His name was Dr. Robert Bacon.

Bacon, a professor of anatomy at the University of Oregon Medical School since 1955, was an environmentalist. During his first trip to Oregon for an interview with the school, he was in awe of Oregon’s beauty, remarking that a slope of Douglas firs where the biggest trees he’d ever seen and the campus gardens were the “most beautiful in the United States, except possibly for Duke.” He described the snow on Mount Hood as dazzling white and the sky as a National Geographic blue.

I met Bacon during an event at the Seaside Aquarium in 2005. His wife, Sue Daniel, accompanied him. I knew Daniel through her time as a board member of Friends of Haystack Rock, and it was by Daniel’s prompting I volunteered with the Haystack Rock Awareness Program for a couple of seasons. It was about this time that Bacon’s name became synonymous with the Beach Bill among us locals.

Bacon was a low-keyed, nonpolitical kind of man, whose introduction into politics began when a young biochemistry student named Lawrence Bitte approached him about an incident that happened with his aunt and uncle at a family gathering in Cannon Beach. His aunt, Betty Wilson, complained to Bitte of being told they could not use the area where they were picnicking and were ushered out of the “private” section in front of the Surfsand Motel.

The owner of the newly built motel had outlined the dry-sand area in front of the property with drift logs and signs to provide a private beach for its guests. This commercial exploitation enraged Cannon Beach residents and visitors alike. A Portland mathematics professor, J. Richard Byrne, wrote a letter to the Highway Commission demanding clarification of public rights to the beach. The interpretation given at that time was the public rights access only included the wet sands area below high tide, and an inquiry would be launched. Bitte, on the other hand, was preparing a letter to McCall.

In the meantime, the controversy in Cannon Beach continued, inciting inquiries into other instances of commercial development along the coast. Not hearing back from McCall, an irritated Bitte made contact with Bacon, who had the reputation of caring about his students.

Since Bitte had not received a reply to his letter, Bacon suggested they travel to Salem to express their feelings and try to get clarification regarding public rights to the beach. Bitte was unable to attend a hearing on the privatization of Oregon’s beaches because of schedule conflicts and sent his wife, Diane, with Bacon instead.

Bacon and Bitte’s wife missed the hearing, but were not deterred in their efforts to be heard. They walked to the hearing room where they met Rep. Sydney Bazett and explained to him why they wanted Oregon’s beaches to remain public lands. Bazett encouraged the two to return after lunch and state their case before the committee of about 20. Bacon and Bitte were the only two who came forward to weigh in on the issue.

Bitte’s wife described it as intimidating — a room of all older men in pinstripe suits and smoking cigars. They both felt the hostility in the room that seemed to be directed at them, said Bacon in a 2005 Seaside Signal interview.

Word spread that the hearings on the Beach Bill would continue. Bacon who had no interest in politics, traveled across the state on behalf of keeping Oregon’s beaches public. Together, Lawrence Bitte and Bacon formed the Citizens to Save Oregon’s Beaches (CSOB). He jokingly recalled how the group was referred to as the SOBs in the 2009 documentary “Politics of Sand.”

Bacon remembered many of the people who helped make the Beach Bill a reality. Among them were journalists Matt Kramer, Ken Fitzgerald, Jim Long and media mogul Ancil Payne of King Broadcasting Co. who kept the bill in the forefront of news coverage.

In the documentary, Bacon showed concern over the Beach Bill’s continuing battle of being modified and weakened. CSOB, he said, never supported the 16-foot vegetation line of the Beach Bill. “We wanted it to state a “natural beach line” since the landscape is ever-changing. In a lecture last December at the Cannon Beach Library, conservationist Neal Maine noted that the public should keep in mind the shoreline and beach are transitory, and the Beach Bill was a political event with no mention of ecological processes.

If Bacon had not taken that crucial trip to Salem, what would have been the fate of Oregon’s beaches? Or, if the confrontation with Bitte’s aunt and uncle never happened and Surfsand owner William Hay’s plans to bring a bit of Hawaii and Florida to Oregon was allowed, what would have become of Oregon’s beaches? Would there be miles of beach littered by masses of brightly colored umbrellas and cabana tents? Would there be fences erected, extending to the low-tide line blocking off sections of private beaches?

If legislative initiatives and natural resource preservation activities had not been passed during the 108 years since the state’s admission to the Union and the passage of the Beach Bill, could the Beach Bill pass legislation today?

The Beach Bill was appealed several times. Judge Alfred Goodwin, the Oregon Supreme Court judge wrote the 1969 decision upholding the constitutionality of the Beach Bill, declaring Oregon’s beaches to remain public property. A Cannon Beach motel owner sought to have the Beach Bill declared unconstitutional in an U.S. Supreme Court 1994 appeal, and again, the court upheld the lower court’s decision favoring a doctrine of custom. However, Justice Antonin Scalia noted, “To say that this case raises a serious Fifth Amendment issue is an understatement. And it is serious in the sense that the land grab may run the entire length of the Oregon coast.”

Oregon is the only state to have open public access to its entire coastline, with Texas and Hawaii following in suit. And, though it is the birthright of all Oregonians to have open access to all the beaches edging its shores, we shouldn’t become complacent in this right or take it for granted. Developers, politicians and private citizens will continue to threaten and challenge Oregon’s Beach Bill.

In 1997, Bacon gave an interview for the 30th anniversary of the Beach Bill. About his part, he said it best, “I taught 4,300 physicians about the structure of the human body, but I felt this (the Beach Bill) was the most important thing I ever did.”

Bacon retired to the coast in 1982 after teaching anatomy for 45 years. He lived in Gearhart until his death in January 2009.

What does the Chamber of Commerce actually host?

What does the Chamber of Commerce actually host?

Submit a Letter to the Editor