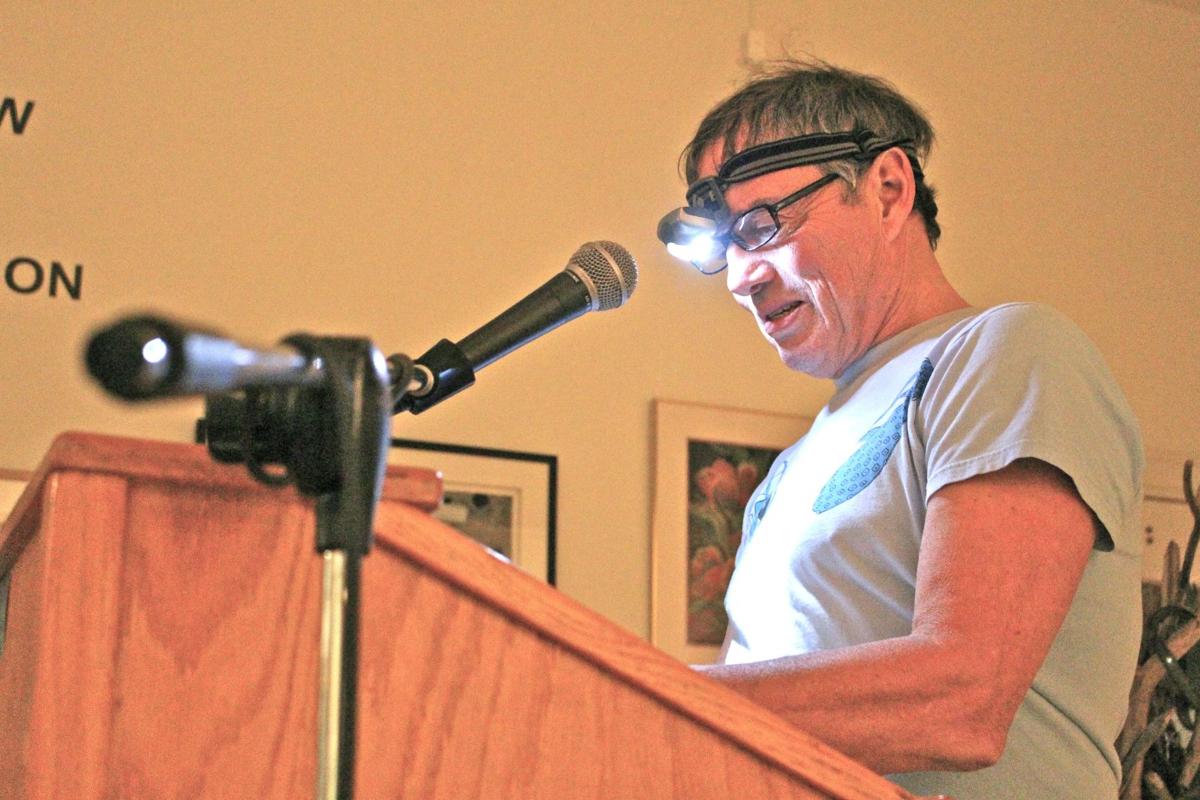 Wearing a headlamp to help him read in the dimness, Peter Lindsey, a Cannon Beach resident, recites his own work and others' work during the Beachnik Cafe last year. He was the first of many readers that evening. 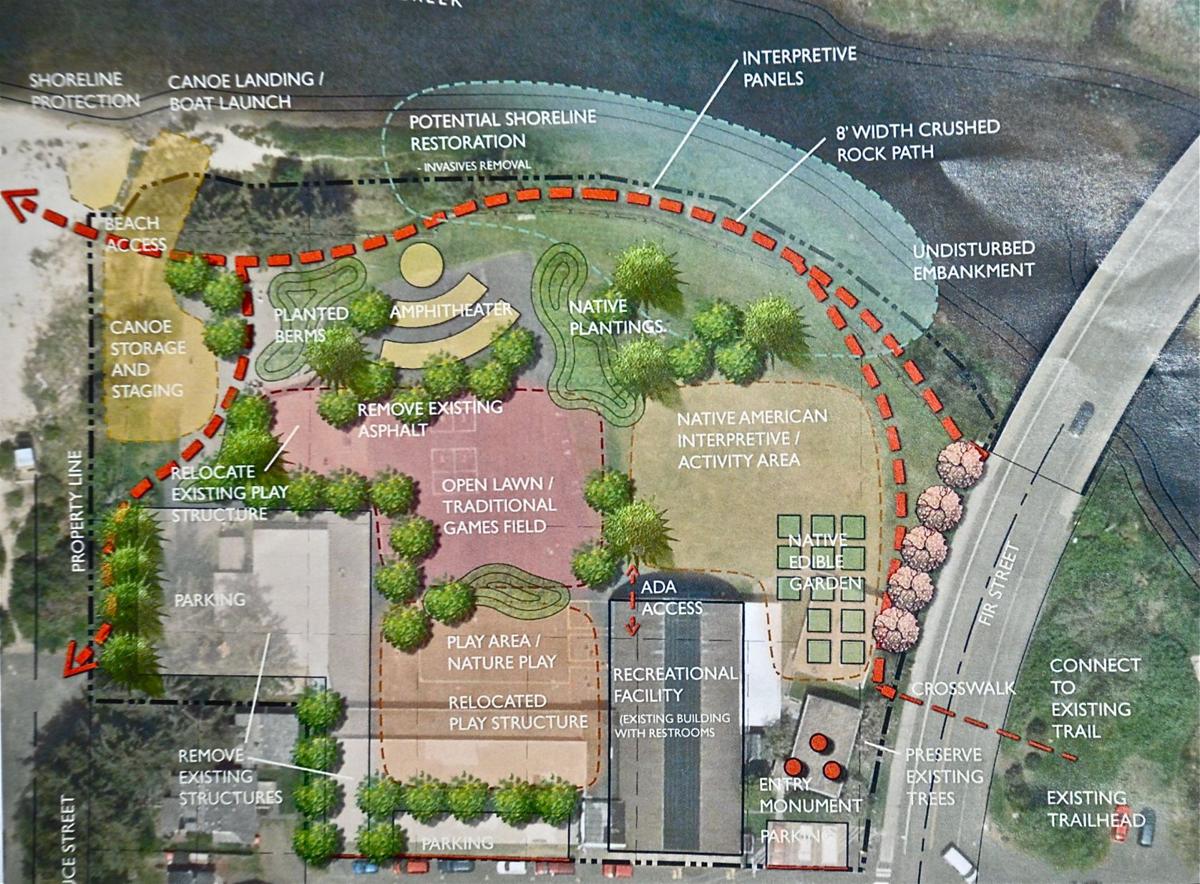 A proposed design of a Clatsop-Nehalem interpretive center shows the elements planned for the former Cannon Beach Elementary School property. Ecola Creek is to the north, and Beaver Street is to the south.

Wearing a headlamp to help him read in the dimness, Peter Lindsey, a Cannon Beach resident, recites his own work and others' work during the Beachnik Cafe last year. He was the first of many readers that evening.

A proposed design of a Clatsop-Nehalem interpretive center shows the elements planned for the former Cannon Beach Elementary School property. Ecola Creek is to the north, and Beaver Street is to the south.

I’ve been wandering lately into the history of Cannon Beach.

And what I’ve learned is how much our landscape has shaped our history.

My dip into the local past began several months ago when Rainmar Bartl, retired city planner for Cannon Beach, told me that he and several friends were working on getting Peter Lindsey’s book, “Comin’ in Over the Rock,” published with new stories and photos.

When the time came to publicize a Tuesday, Nov. 10, fundraiser (7 p.m. at the community hall) to collect donations for the book’s “reboot,” Bartl asked me to write the story (see the Nov. 5 Coast Weekend or the Nov. 6 Cannon Beach Gazette).

Lindsey, who is known as “Professor” Lindsey because he used to teach English at Clatsop Community College, is one of just a handful of Cannon Beach residents remaining who remember the village of the 1950s, when it really was just a little village of 200 people or fewer.

But as a boy whose family summered there in the 1940s and moved there permanently in 1954, Lindsey knew practically everyone who lived in or regularly visited town. He knew all the stories — either those he experienced firsthand or those that were told to him.

In 2004, he wrote down those stories and put them into a book. He got the title from a quote by former gas station owner George Malstead, aka “Happy Tooth.”

“She’s comin’ in over the rock today!” Malstead told the boys, including Lindsey, in 1957, as wind-swept rain dashed against Haystack Rock and beat on windows throughout town.

Lindsey’s stories recount the days when there were several gas stations — now reduced to one — and when youngsters roamed freely without a lot of supervision, although, undoubtedly the small village did, collectively, raise its children.

In those days, cars drove regularly on the beach, and local tow-truck drivers competed to extract them from clutching sand during high tide. “Characters” numbered in the dozens, including several “pops” — men with genial dispositions, long-standing relationships in the community, patience with youngsters and idiosyncratic skills or trades; men and women nicknamed “Preach,” “Beargrease” and “Dog Lady; artists who immigrated to Cannon Beach in the 1960s and ’70s; dory boat operators who took off in 12-foot-long boats near Haystack Rock; and assorted loggers, tall-tale tellers and rascals.

The “rascals” who moved to Cannon Beach were drawn by the landscape,” Lindsey contends.

“When this country was young, the spaces were vast,” he writes. “The northern Oregon coast had scant population and limitless nature. Large spaces require powerful spirit and character.”

In another encounter with Cannon Beach’s history, I visited recently with Diane Collier and Dick Basch, chairwoman and vice-chairman, respectively, of the Clatsop-Nehalem Confederated Tribes. We met, appropriately, at NeCus’ Park, the site of a village where Clatsop and Nehalem tribes lived along the banks of what is now Ecola Creek. Eventually, the tribes hope to create a cultural center at NeCus’.

Basch and Collier told me how excited they were that U.S. Rep. Suzanne Bonamici, D-Ore., had introduced House Resolution 3736 that would, if Congress approves it, give federal recognition to the Clatsop-Nehalem tribes and the opportunity for funding to improve members’ health and education.

During our conversation, Collier talked about her great aunt who was born in NeCus’ village. Basch reminisced about Joe Scovell, who was the tribe’s hereditary chief until his death in 2014. They described Hobsonville, a community on Tillamook Bay just south of Garibaldi, which became home to some Nehalem, Clatsop and Tillamook tribal members but which also was the target of horrific local Ku Klux Klan raids.

As we sat at the picnic table in NeCus’ (once the playground of the former Cannon Beach Elementary School) and discussed the area’s earliest history, I could almost visualize the longhouses on either side of the creek where generations of Collier’s and Basch’s relatives once lived, fished and hunted. I recalled a photo I once saw of Basch as a youngster, dressed in native garb, participating in the 1955 sesquicentennial celebration of Lewis and Clark’s arrival on this very site.

While they talked nostalgically about the past, however, Collier and Basch dared to dream that the federal government would, at last, honor the tribe’s history, a history that reaches back in this area several centuries and also includes inhabitants embodying the powerful spirit and character that Lindsey writes about.

Federal recognition, Basch said, would allow the Clatsop-Nehalem Confederated Tribes to move forward. It would give the tribes’ 182 members, spread throughout the region, a reason to come home to the North Coast.

“It means it would allow us to carry on our culture,” he added, “to carry on to the future.”

Nancy McCarthy is the retired editor of the Cannon Beach Gazette and Seaside Signal and the former South County reporter for The Daily Astorian. She lives in Cannon Beach.

In those days, ‘Characters’ numbered in the dozens.