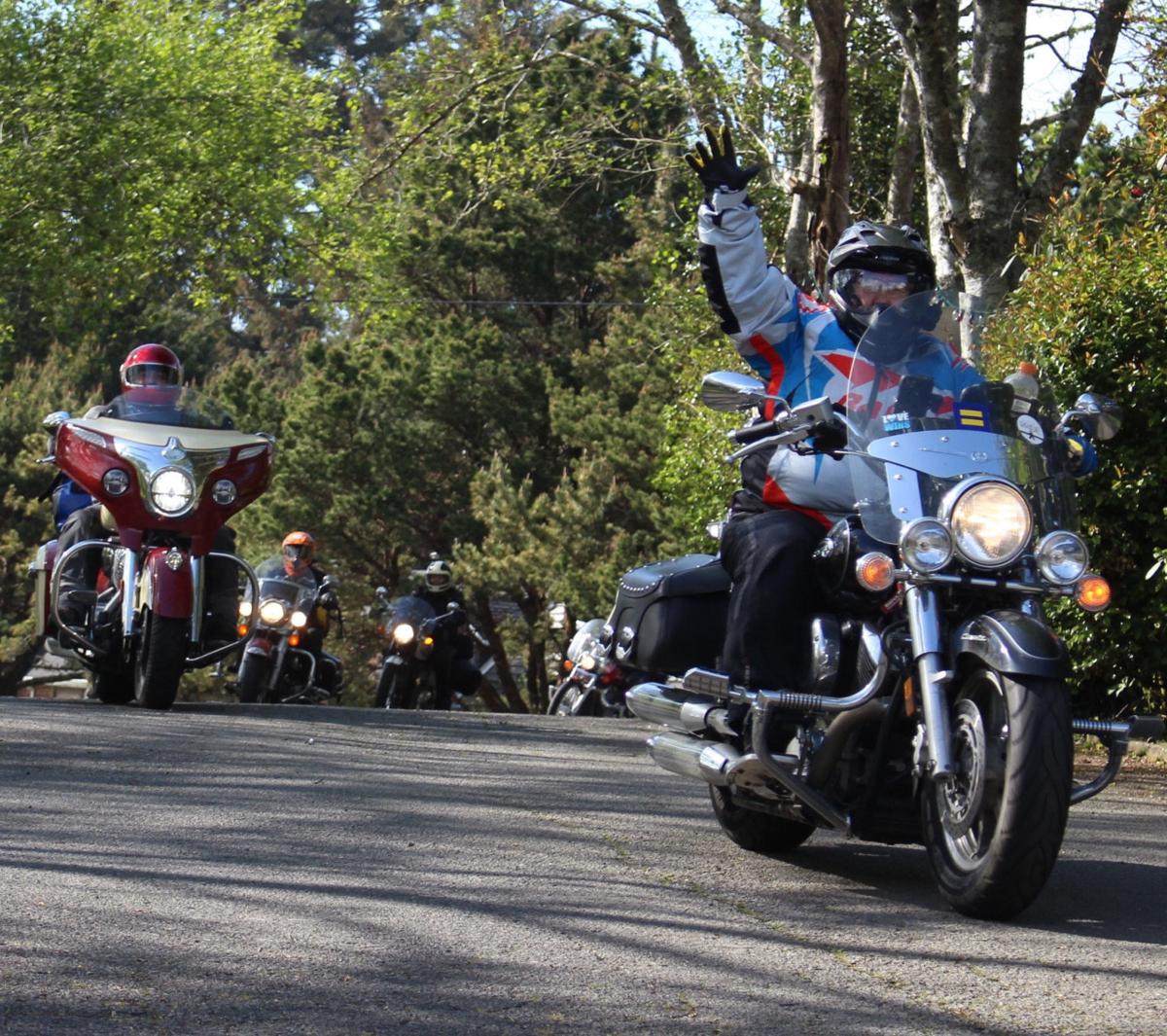 Motorcyclists who are a part of “Flock to the Rock” enter their base camp at Sea Ranch RV Resort. 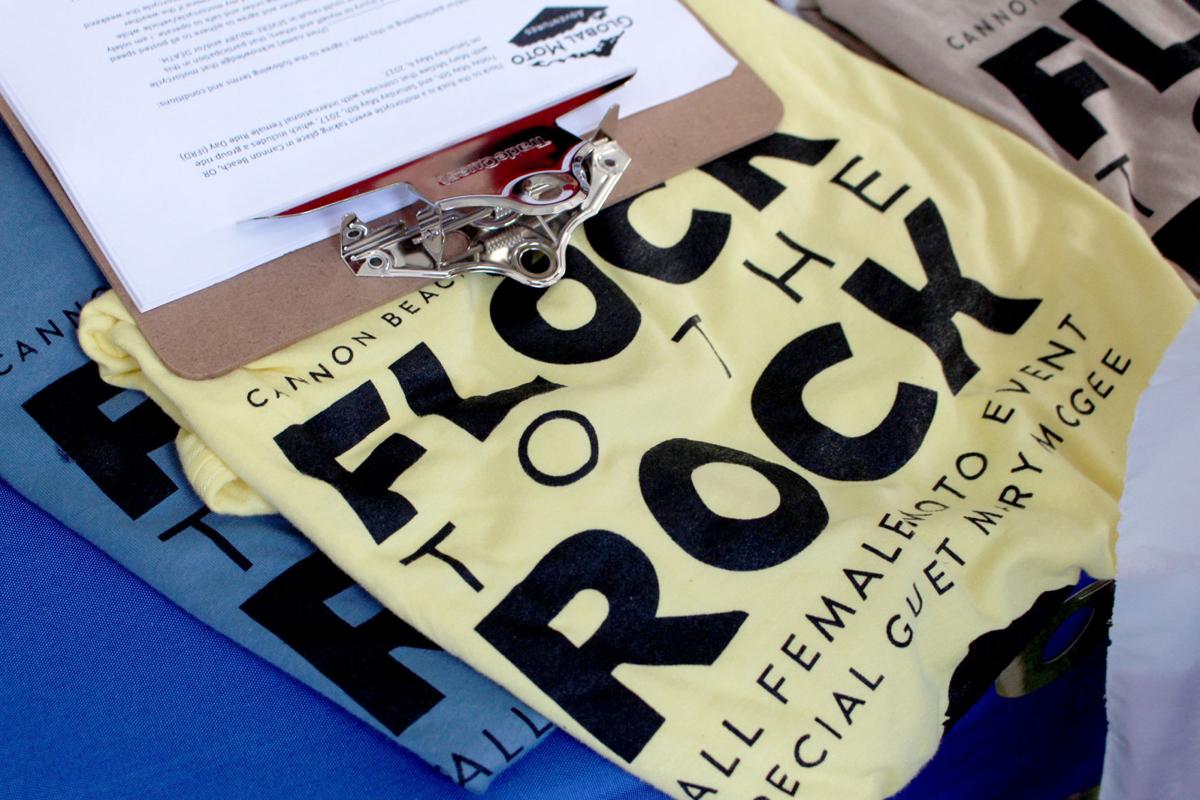 The event name “Flock to the Rock” came out of a conversation Ruth Belcher and Stephanie Luper had about tourists on the beach back in January. 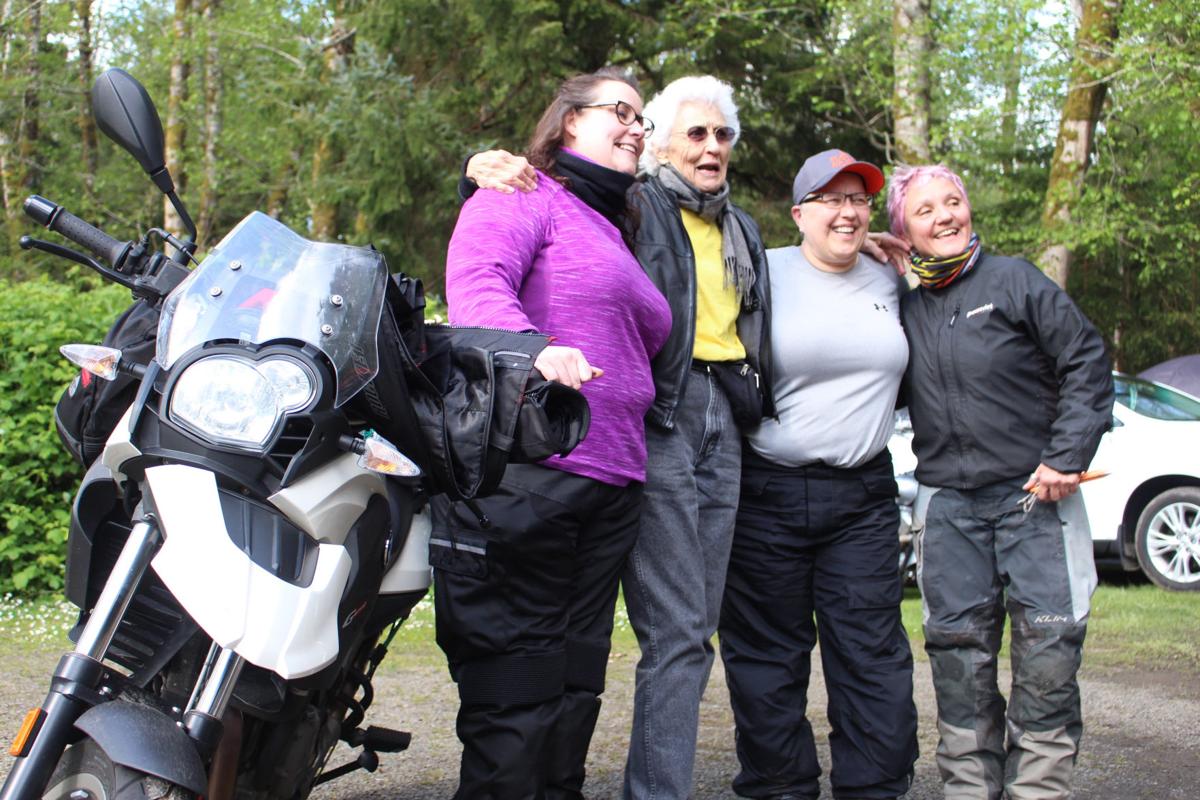 Stephanie Luper, Mary McGee, Ruth Belcher and Dionne Haroutunian pose for a photo by Luper's bike. McGee and Haroutunian were both speakers at the event. 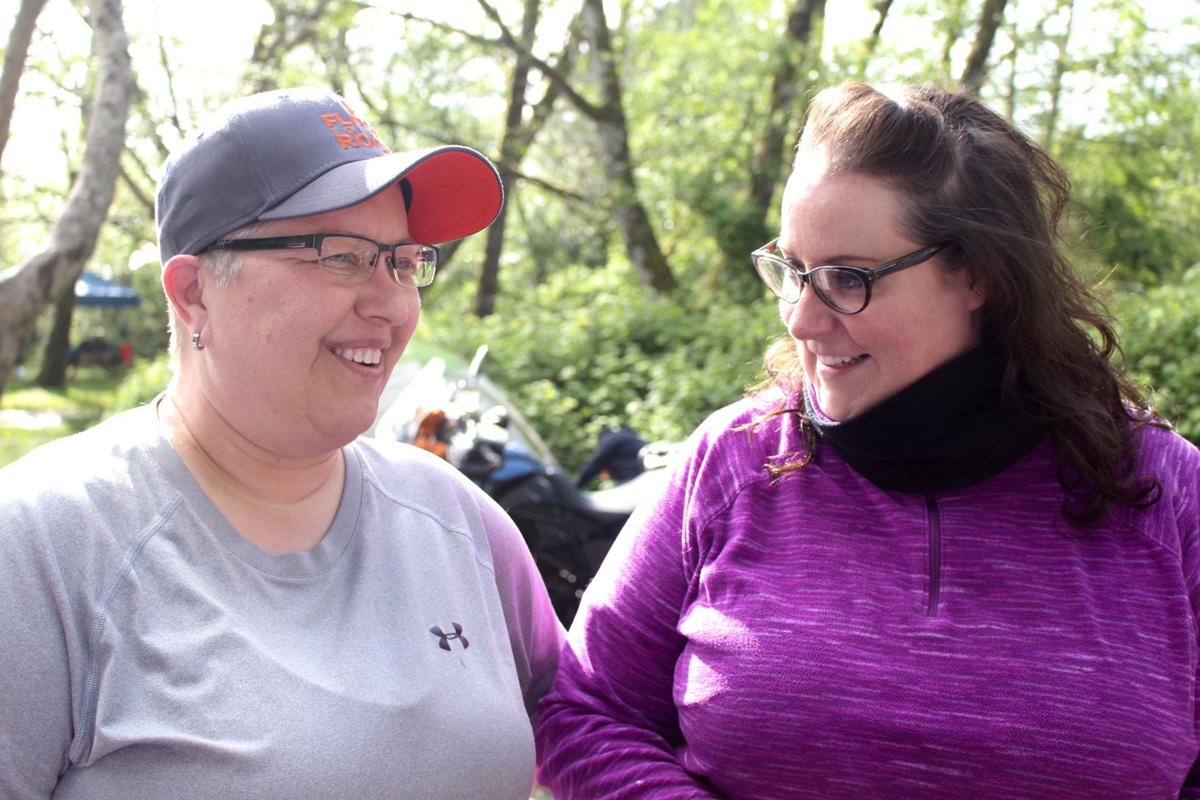 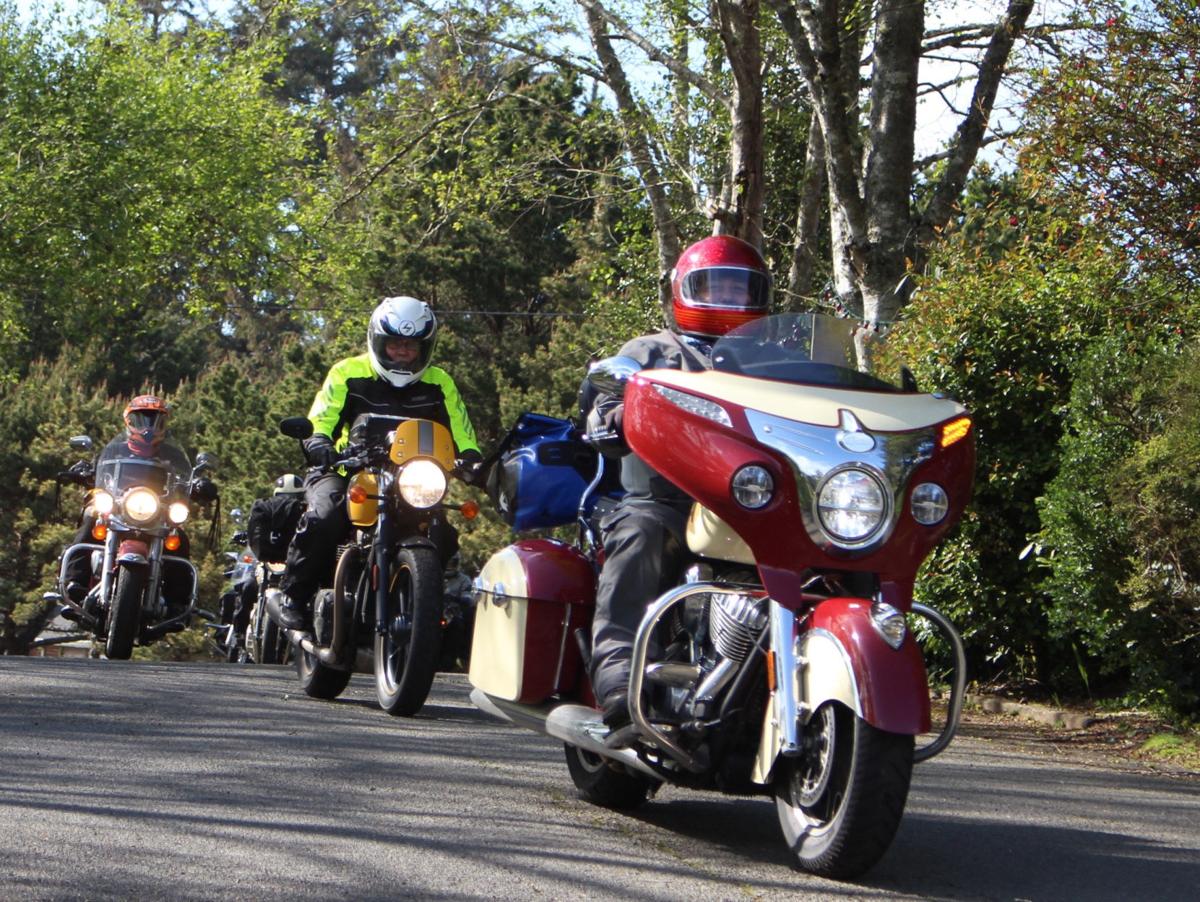 Participants in “Flock to the Rock” drive into the Sea Ranch RV resort to start a weekend of motorcycle touring and camaraderie.

Motorcyclists who are a part of “Flock to the Rock” enter their base camp at Sea Ranch RV Resort.

The event name “Flock to the Rock” came out of a conversation Ruth Belcher and Stephanie Luper had about tourists on the beach back in January.

Stephanie Luper, Mary McGee, Ruth Belcher and Dionne Haroutunian pose for a photo by Luper's bike. McGee and Haroutunian were both speakers at the event.

Participants in “Flock to the Rock” drive into the Sea Ranch RV resort to start a weekend of motorcycle touring and camaraderie.

Four years before leading 80 women on a three-day motorcycle tour to Cannon Beach, Ruth Belcher was terrified of driving on the freeway.

It had been 15 years since Belcher had last ridden a motorcycle. She started riding dirt bikes when her grandma bought her one when she was 9 years old in Kentucky’s Appalachian mountains, but took a hiatus to raise her two sons until four years ago.

“I realized there was something that I was missing that I loved,” Belcher said.

Things were different when she returned. She said she felt “a little older, and a little heavier,” and some of her riding confidence had waned.

When she sought a way to reach out to other women motorcyclists, she found her options were limited.

So the Everett, Washington, native took it upon herself to make a venue by founding Global Moto Adventures, an international, women-only motorcycle touring and training group after trying to reach other women riders on Facebook and different clubs didn’t cut it.

“I envisioned a community of women to organize rides, a community to turn to for support, education and training and find inspiration to live their dreams,” Belcher said.

Women from all over the Pacific Northwest rode to the inaugural event, “Flock to the Rock,” the first weekend of May at the Sea Ranch RV resort.

The weekend included touring trips down through Manzanita and east Clatsop County, group dinners to share experiences of triumph and stigma, and a presentation from Mary McGee, the first woman to ever compete in motocross racing in the U.S.

Four years ago, it took Belcher a 4,800-mile trip across 10 states in 21 days to overcome her fears of conquering the freeway by herself. Now she hopes to offer the opportunity of adventure to other women, she said.

“That’s the moment I got my confidence back,” Belcher said. “These trips are about empowerment. I wanted other women to experience that. Because we all have (moments of fear), we just don’t know how to talk about it.”

Choosing Cannon Beach as the company’s first destination trip came out of a conversation Belcher and her friend Stephanie Luper had while visiting the town back in January.

“What started out as a chat on the beach in January became this event,” Belcher said. Belcher remembers watching on the beach with Luper, and commenting “I can’t believe it, people are just flocking to the rock!”

Belcher hopes to make this an annual event.

Much of the support Belcher looks to provide within this organization comes from a general feeling of stigma women riders feel in comparison to their male counterparts. Belcher said she feels women are faced with specific challenges, including less sponsorship and recognition of their sport in the industry, fewer gear options and certain cultural barriers tied with family life.

“They are stifled by families or partners, and I want to be that light that lifts them out of that,” Belcher said.

It’s a factor that’s been around awhile in the sport, McGee recalls. The keynote speaker of the weekend started racing cars in the late 1950s, and then transitioned into dirt bike and motocross racing in the early 1960s. She became the first woman ever to race the Baja 1000 — a multiday, solo ride through the desert — in 1968.

But before she could even enter her first motorcycle race in 1960, she was presented with a number of challenges. McGee, now 80, was attempting to enter races in a time where she wasn’t allowed to use a debit card unless it was under her husband’s name. Some men refused to take her measurements to have motorcycle gear made to fit her because she was a woman, she said.

Ultimately, she had to ask permission from the American Federation of Motorcyclists to even be considered to try out, she said.

“They just didn’t know what to do with me,” she laughed. “But that’s alright — they were just afraid.”

McGee said while her husband helped her get her start in car and motorcycle racing, it’s the adrenaline and camaraderie between other women motorcyclists that kept her riding up into her 70s.

“The exhilaration, oh my God how do you describe it,” she said. “The thing about motorcyclists is you always have a friend. You pull into a gas station somewhere you’ve never been, and you see a couple people on bikes, and instantly you’re friends. There’s a special connection.”

Barb Brown was one of the many riders who joined the event after Belcher reached out to her. She said she was inspired by the location and the company.

“I love riding with other women,” Brown said. “We don’t get supported enough, so we support each other.”

Brown has been riding a motorcycle for 38 years. Her journey started out of necessity in Rochester, New York. She was tired of riding a bicycle, so she figured transitioning to a motorcycle would be cheaper than trying to buy and insure a car.

Necessity soon turned into a passion that took her on multiple cross-country road trips. If she had it her way, she would ride a motorcycle everywhere, but she has conceded to commuting by car in her current city of Seattle because of rain and traffic.

“It’s wind therapy. Motorcycling is special because you have no choice but to live in the present,” Brown said. “And women motorcyclists? We are fearless. We don’t let people stop us from what we want to do.”