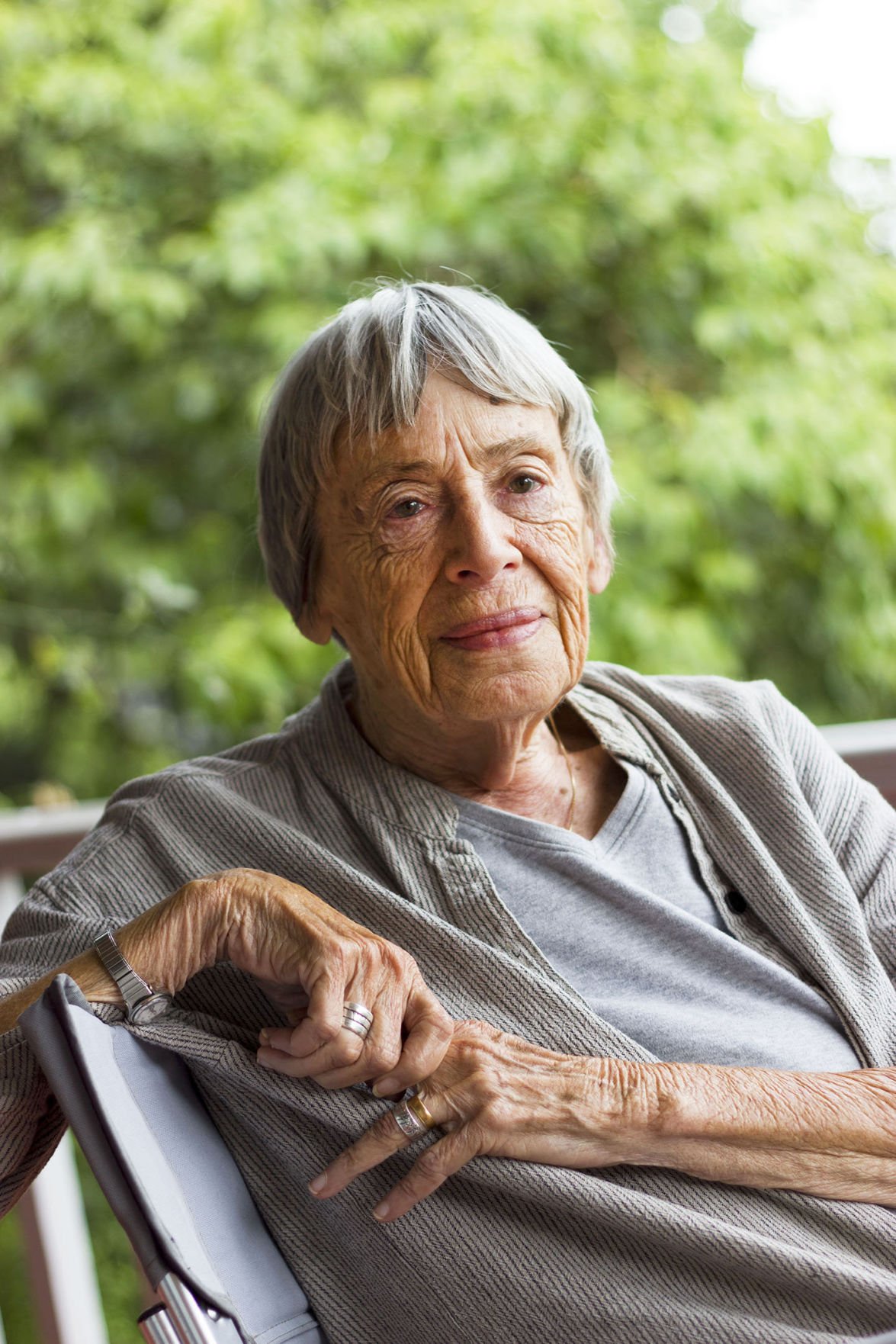 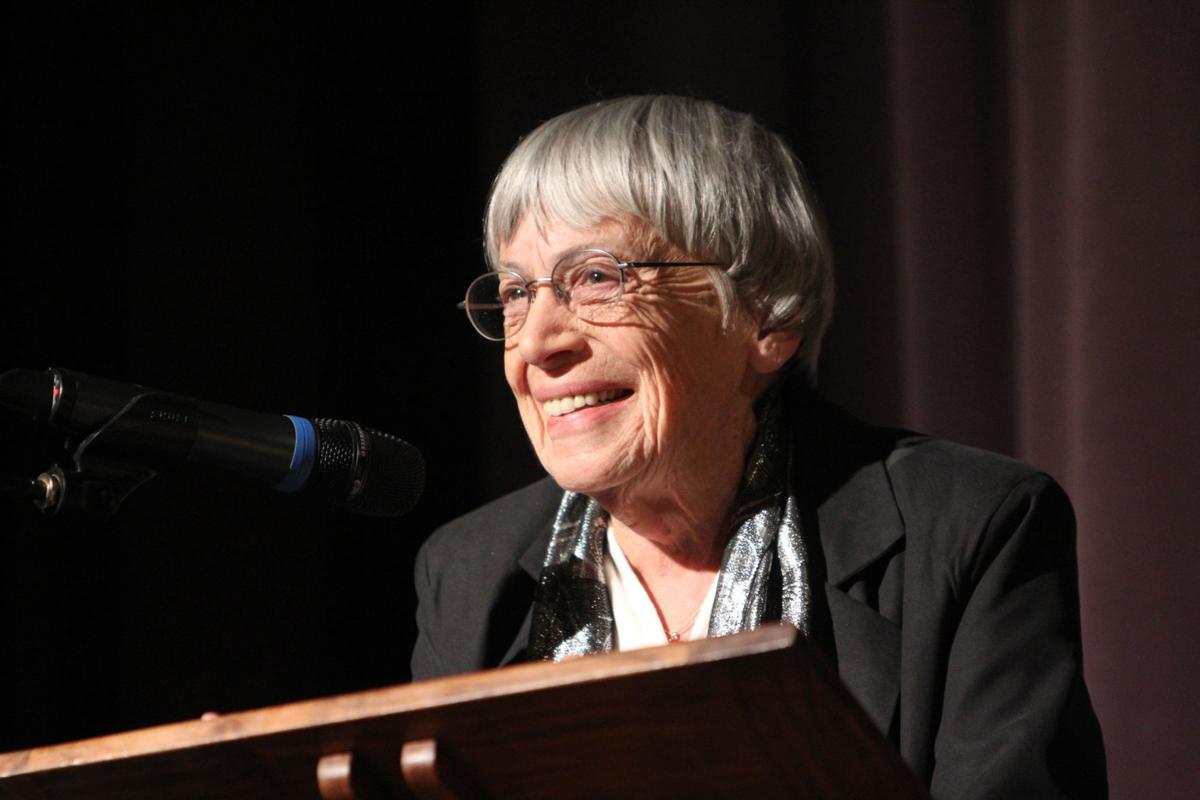 Ursula K. Le Guin speaking at the University of Oregon in Eugene in 2013. 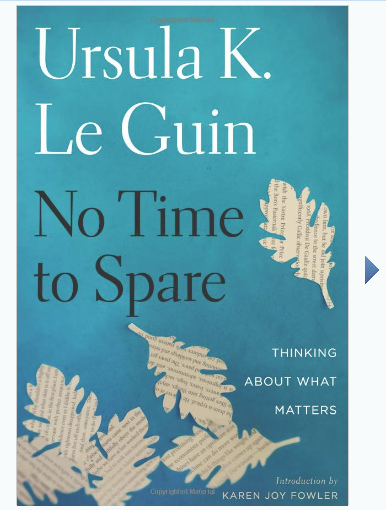 Ursula K. LeGuin's “No Time to Spare,” released in December.

To plant a tree in memory of Ursula Le Guin: Remembering as a living tribute, please visit Tribute Store.
1 of 3

Ursula K. Le Guin speaking at the University of Oregon in Eugene in 2013.

Ursula K. LeGuin's “No Time to Spare,” released in December.

Ursula K. Le Guin, a literary giant who made her home in Portland and Cannon Beach, died Tuesday at 88.

The world-famous author was heralded as a major female voice in science fiction, but her work transcended the genre.

Betsy Ayres, of Cannon Beach, remembered Le Guin as a friend and inspiration. “Her ability to see other societies and other worlds opened up my eyes to different ways of looking at my own life,” she said. “She will be greatly missed.”

She was born Ursula Kroeber in Berkeley, California, on Oct. 21, 1929, the youngest of four children and the only daughter of two anthropologists, Alfred L. Kroeber and Theodora Quinn Kroeber.

As a young writer, Le Guin acutely felt the closed society of both literary and male-dominated elites, which stymied her yet also shaped her own genre-defining path.

She graduated from Radcliffe College in Massachusetts in 1951, earned a master’s degree in romance literature of the Middle Ages and Renaissance from Columbia University in New York in 1952, and won a Fulbright scholarship to study in Paris. There she met her future husband, Charles Le Guin, who survives her.

Early in her literary career, a frustrating period of rejections gave way to a venture into a new genre.

The author’s success was immediate. Science fiction opened Le Guin up to writing not only about aliens but from “alien” points of view, The New Yorker wrote in a 2017 profile.

She often incorporated Cannon Beach into her poems, sometimes by name and other times through coastal imagery.

“I loved it from the start,” Le Guin said in a 2017 interview. “Way, way back, in the ’60s. It was a little artists’ hideaway town. The sculptor Joe Police was mayor. There were no mega-mansions owned by out-of-state millionaires, no big ugly cement walls on North Beach, it had its own hardware stores and indie drugstore and Osborne’s excellent grocery. It was more self-contained and a good deal, well, gnarlier. But it’s still pretty gnarly, thank goodness.”

Her 1991 novel, “Searoad: Chronicles of Klatsand,” portrayed a community that resembled Cannon Beach. The novel is chock-a-block with familiar imagery: the kite shop, the year-round Christmas store, Tom’s Grill and the volunteer library.

“I mentioned Cannon Beach in one of the stories so that people would know that Klatsand is NOT (quite) CB,” Le Guin wrote in a 2017 email. “Klatsand has a lot of elements of CB, but it also has bits of Seaside and Manzanita and Nehalem.”

Rex and Diane Amos of Cannon Beach met the Le Guins when they visited their house in Northwest Portland to share a mutual love of music.

“Diane brought her upstairs to meet me and to give her a tour of the house,” Amos recalled. “When we met, Ursula asked me about my art. I told her that many people found my stuff radical and provoking. She laughed and said, ‘Good, we need more of that. Keep it up.’ Of course, for that bit of encouragement I liked her immediately.”

Le Guin became a part of Ayres’ life after Le Guin moved into the same neighborhood as her grandparents decades ago.

For Ayres, Le Guin’s poignant sense of humor paired with a “clear, uncompromising voice,” impacted the literary community and community at large in “a giant way.”

“She spoke her truth,” Ayres said. “I would say it was her and Terry Brooks: Those were our two literary luminaries from Cannon Beach.”

Ayres said Le Guin’s voice when it came to writing about women offered clarity in her own life.

Cannon Beach resident Rainmar Bartl remembers Le Guin and her husband stopping by a weekly community coffee that happens at Cheri’s Cafe whenever she was in town.

Bartl remembers her as a “very unpresuming person” with “very strong values.”

Though she didn’t live on the coast, she cared about Cannon Beach and took an interest in city affairs, Bartl said. “She was very generous with her time, especially as someone at this level of world renown. I remember she would come and give talks, read from her books. She would make herself available for these community events when she could.”

Le Guin publicly supported an immigrant inclusivity resolution that ultimately was presented and passed by the city in 2017.

“It is unfortunate that our current federal government, by attempting to enforce policies that deny the very principles our republic is founded on, makes such a resolution necessary,” Le Guin said in an interview with the Cannon Beach Gazette.

At 85, she was the surprise star of the National Book Awards in 2014 with a speech that encouraged people to be masters of their own destiny, like a Le Guin character whose dreams can alter reality.

Le Guin was given the Medal for Distinguished Contribution to American Letters. She accepted the medal on behalf of her fellow writers of fantasy and science fiction, who, she said, had been “excluded from literature for so long” while literary honors went to the “so-called realists.”

Her most recent book, “No Time to Spare: Thinking About What Matters,” was released to widespread acclaim in December.

It is Le Guin’s message to future generations of writers and readers that will be remembered by her many fans.

In the National Book Awards speech, she called upon her fellow artists to resist the temptation to kowtow to corporate pressures.

Freedom, she said, will be their reward.

The author received a standing ovation.