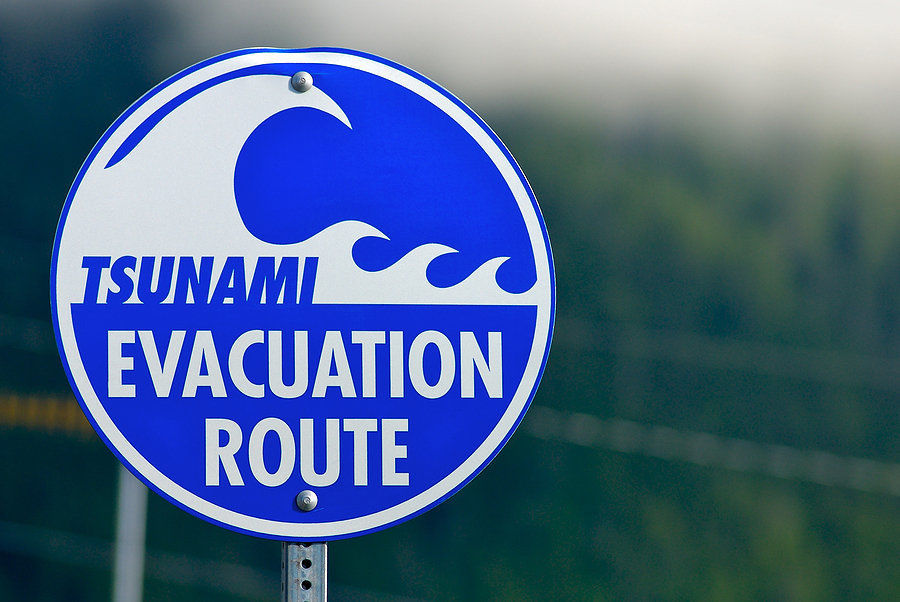 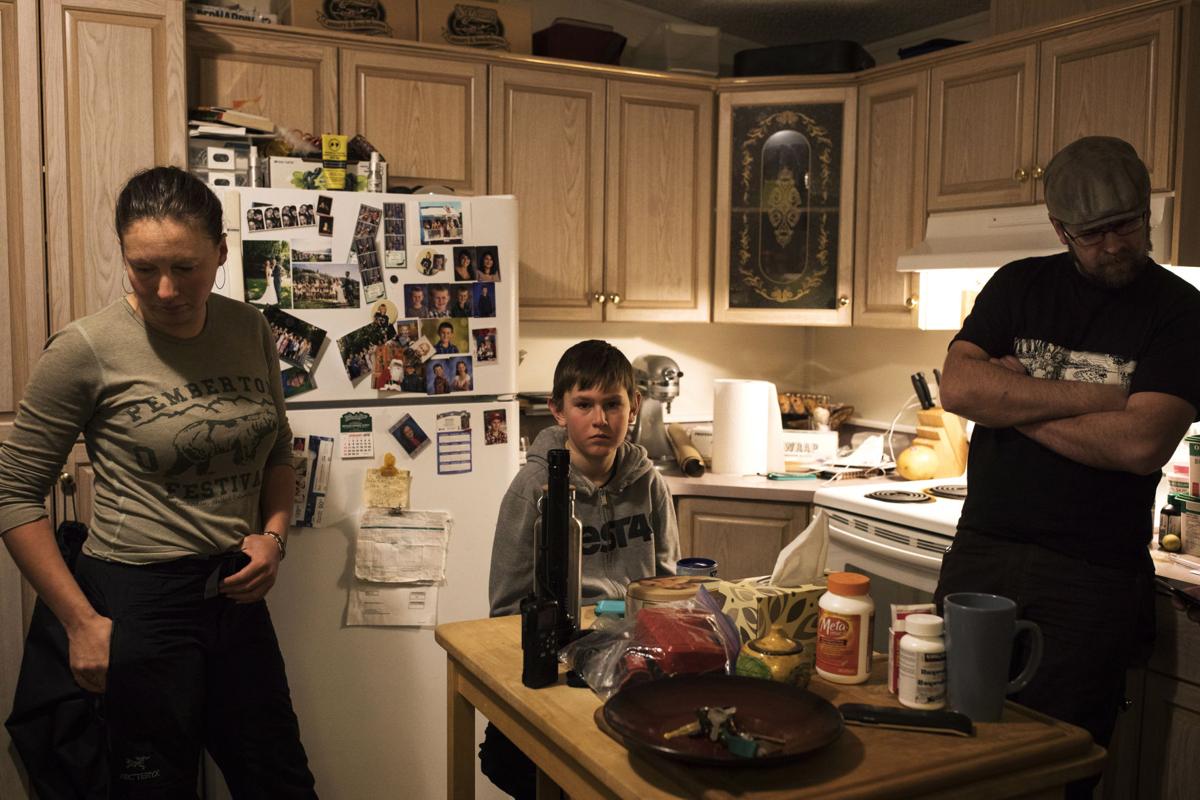 Brennan Caton, center, Misty Lawson and Courtney Caton, right, listen to the Coast Guard radio inside their home for updates on the tsunami warnings that shook Tofino, British Columbia, after the Alaska earthquake on Tuesday.

Brennan Caton, center, Misty Lawson and Courtney Caton, right, listen to the Coast Guard radio inside their home for updates on the tsunami warnings that shook Tofino, British Columbia, after the Alaska earthquake on Tuesday.

ANCHORAGE, Alaska — A powerful earthquake struck off an island in the Gulf of Alaska, prompting a tsunami threat that sent the state’s residents along the southern coast and western Canada fleeing for higher ground just after midnight.

After a few intense hours, the tsunami warning was canceled, allowing people to return home from shelters. There were no immediate reports of damage, not even on Kodiak Island, the closest land to the epicenter of the magnitude 7.9 quake. The quake was followed by dozens of aftershocks.

Oregon, Washington state, California and Hawaii were under tsunami watches, which eventually were lifted.

Word of a potential tsunami rattled nerves on the North Coast.

A local alert was not sent out by Clatsop County Emergency Management, said Director Tiffany Brown.

Cannon Beach Rural Fire Protection District made the decision to open a joint Emergency Operation Center for Cannon Beach, Arch Cape and Falcon Cove as a precaution, but it was closed soon after the tsunami watch was called off.

In Pacific County, Washington, the tsunami watch caused some to seek high ground. As happened on March 11, 2011 when a serious earthquake in Japan was feared to have caused an ocean-crossing tsunami, some local residents sought shelter at Hilltop School in Ilwaco. Authorities opened some forest gates — for example the access road to the rock quarry above Chinook — to allow motorists access. A witness described a line of vehicles eastbound on U.S. Highway 101 leading away from the coast in the hours the alert was in effect.

The first of four automated calls from Pacific County’s reverse 911 system went out around 1:50 a.m. It advised coastal residents of a tsunami watch from 1:35 a.m. to 2:35 a.m. It suggested they check the National Weather Service or local media for more information.

The alert also listed a local phone number to call for more information. The message was repeated when people called to learn more.

The Pacific County Emergency Management Agency sent its first news release to the local media at 4:38 a.m. It wasn’t about the tsunami warnings, though. They’d been canceled 20 minutes earlier. It was about a high-wind warning from later in the day, from 1 to 7 p.m.

When the Chinook Observer asked in an email why no information was sent to reporters when the emergency calls were directing people to check local news for tsunami watch updates, County Emergency Management Director Scott McDougall said he’d identified some “issues with the calls that will ensure a bit better notification next time around.”

The Alaska earthquake was a type that usually produces less vertical motion, which means less chance for waves to build for a tsunami.

That’s according to Paul Earle, a seismologist with the U.S. Geological Survey.

He says the earthquake was within the Pacific plate and was a so-called “strike-slip earthquake.”

That’s the type when one side of the fault slides past another fault, like the San Andreas fault in California.

He says that’s somewhat unusual because quakes in the area are usually thrust earthquakes where one side goes underneath the other.

He says those are the type that cause more vertical motion and increase the chance for a tsunami.

The Alaska quake was the planet’s strongest since an 8.2 in Mexico in September.

For Alaskans accustomed not only to tsunami threats but also to regular drills, the early morning alert that made cellphone alarms go off still created some fretful moments. The phone message read: “Emergency Alert. Tsunami danger on the coast. Go to high ground or move inland.”

Keith Perkins got the phone alert and later heard the sirens going off in his southeast Alaska hometown of Sitka.

He said people on Facebook were chattering back and forth about whether this was real or not and what they should do.

Given the magnitude of the earthquake, Perkins said he thought it best to head to the high school, a tsunami evacuation point, even though in the past he felt his home was at a “high-enough spot.”

The magnitude 7.9 earthquake was recorded in the Pacific Ocean at 12:32 a.m. about 170 miles southeast of Kodiak, home to one of the nation’s largest Coast Guard bases.

The temblor prompted the tsunami warning stretching thousands of miles along Alaska’s southern coast, from Attu in the Aleutian Islands to Canada’s border with Washington state. Kodiak is located about 200 miles south of Anchorage, the state’s largest city, which was not under a tsunami threat.

People reported on social media that the quake was felt hundreds of miles away, in Anchorage. Reports varied about how long the quake’s shaking lasted, depending on where you were.

In the popular cruise ship town of Seward, about 110 miles south of Anchorage, fire chief Eddie Athey said the quake felt like a gentle rattle and lasted for up to 90 seconds.

“It went on long enough that you start thinking to yourself, ‘Boy, I hope this stops soon because it’s just getting worse,’” Athey said.

The earthquake woke Kodiak Police Lt. Tim Putney from a dead sleep. He estimates it shook for at least 30 seconds but admits his timeframe might be skewed by sleeping through some of it.

“I’ve been in Kodiak for 19 years that was the strongest, longest lasting one I’ve ever felt,” he said by telephone.

Kodiak was projected to get the first tsunami wave, and officials warned residents to evacuate if they lived in low-lying areas. Residents scrambled to safety, and some sought refuge in schools that were transformed into shelters above the 100-foot level. The wave never materialized there or in other coastal communities like Homer and Seward, and the warning was soon canceled.

Larry LeDoux, superintendent of the Kodiak Island Borough School District, said schools were open as shelters and estimated there were about 500 people at the high school.

He described the atmosphere inside as calm, with people waiting for any updates.

He said sirens go off in the community every week, as a test to make sure they are working. He said the sirens were sounded for the early Tuesday tsunami warning.

In Seward, at the southern end of Alaska’s Kenai Peninsula, residents retreated to higher ground or left on the only road out of the city, fire chief Athey said. He described it as a controlled evacuation and compared it to folks driving home from a holiday fireworks show.

The Daily Astorian and the Chinook Observer contributed to this report.