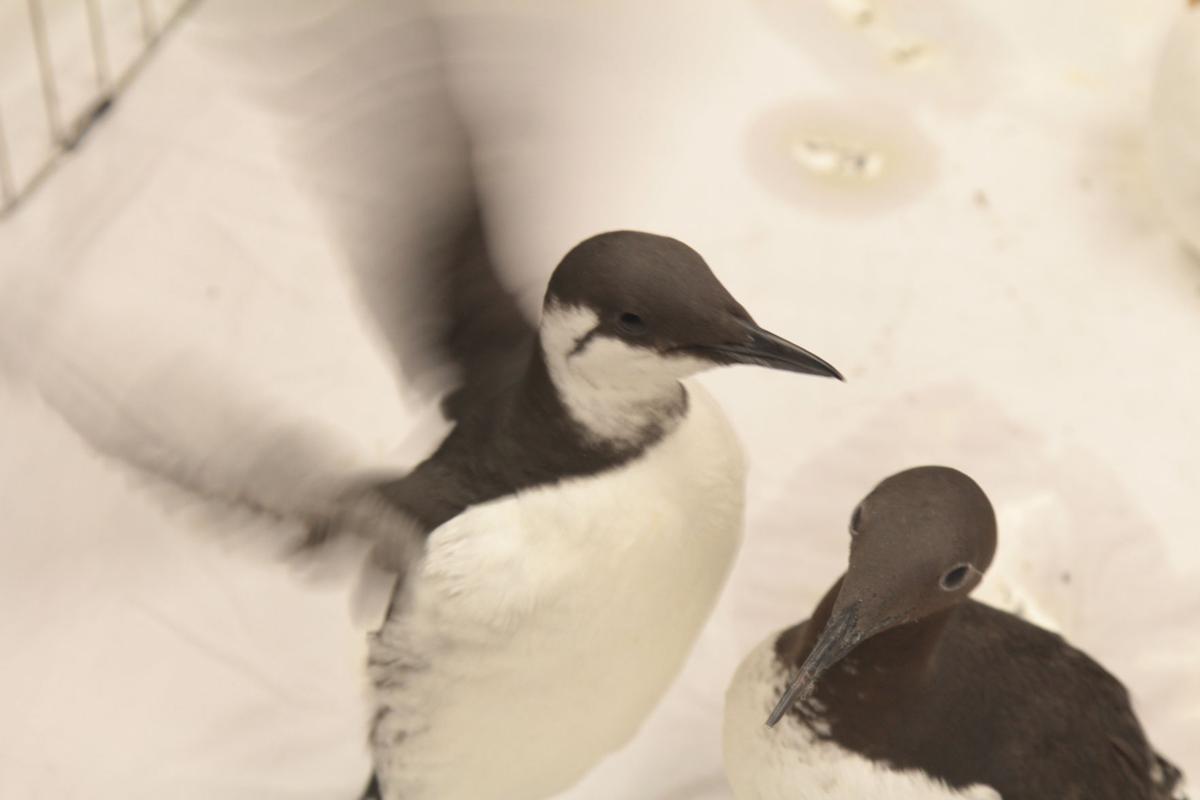 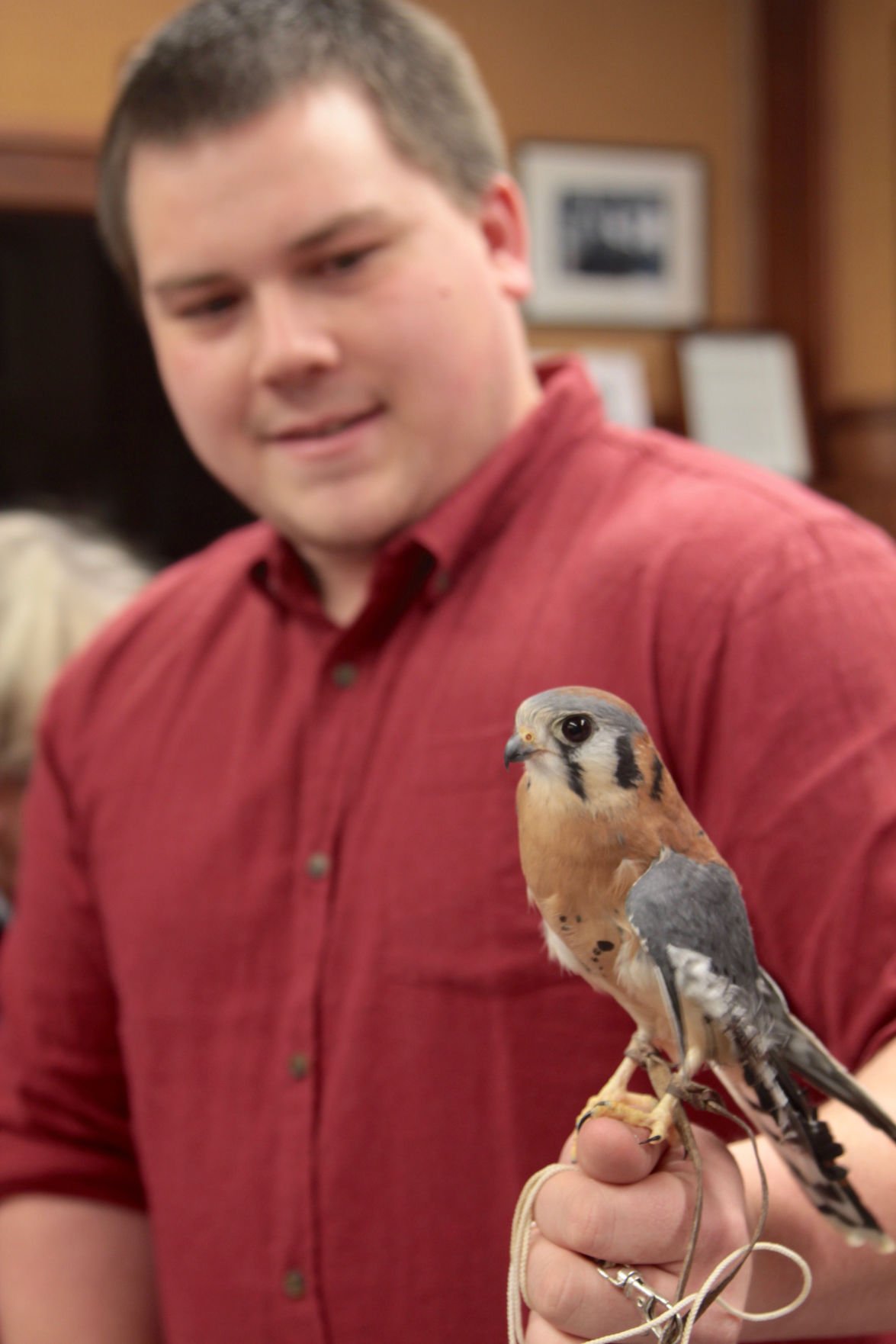 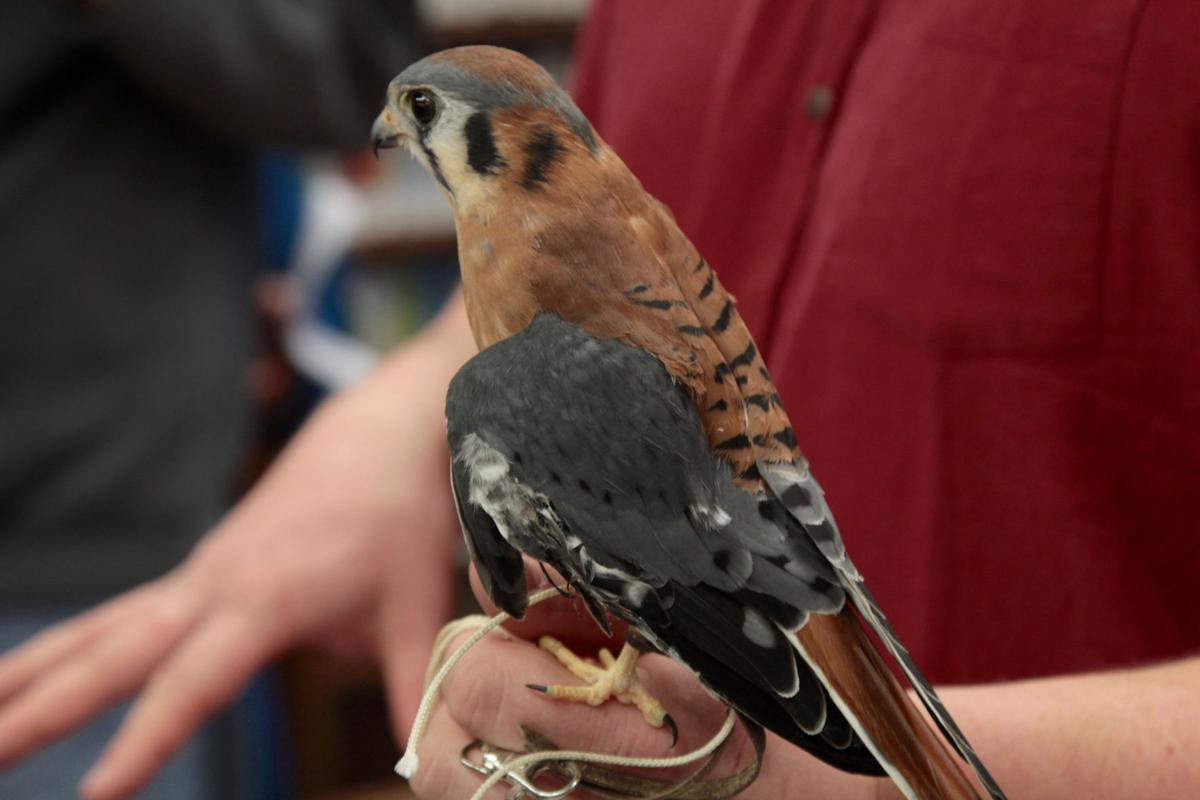 “There’s no such thing as a seagull,” said Josh Saranpaa with a wry smile. “If you hear anyone say that, slap them across the face.”

The room burst into laughter, and a cheeky member of the audience joined in the joke.

“But I saw a seagull eating a starfish,” the man offered.

Why there may be no such thing as a “seagull,” there are, however, many different species of gulls —laughing gulls, ivory gulls, California gulls, slaty-backed gulls and so on. Those found most often in Cannon Beach are known as northern fulmars.

One of them was in the library Jan. 13, along with three other species. They were brought by Saranpaa, the director of the Wildlife Center of the North Coast, as part of the library lecture series and in conjunction with the Haystack Rock Awareness Program. All the birds making the trip from the 100-acre refuge in Olney had been rehabilitated by staff and volunteers.

Annually, the nonprofit Wildlife Center rescues an average of 2,000 animals, mostly seabirds but also mammals like bobcats and fawns.

“We specialize in seabirds,” said Saranpaa. “Cannon Beach is one of our biggest contributors, as far as seabirds go.”

In 2015 some 700 charges of injured birds were taken in after calls in Cannon Beach.

Saranpaa began volunteering at the center at age 16. Before her death late last summer, the center’s founder and director Sharnelle Fee handed the reigns to Saranpaa, now 23.

“You feel needed out there,” Saranpaa said of what endears him to the Wildlife Center.

Saranpaa was joined at the lecture by Sue Stacy, a special education teacher in Seaside who has volunteered at the Wildlife Center for four years.

Together, Stacy and Saranpaa introduced four species of birds, which milled about in a cages on the Library floor.

The first, named “Grandpa,” on account of his bushy, white eyebrows, was a rhinoceros auklet, a member of the puffin family.

“They are pelagic birds,” Stacy said. “That means they live primarily out at sea. You would not normally see them, though they do come ashore for mating purposes.” Even so, spotting a rhinoceros auklet can be difficult.

“They make 20- or 30-foot-long tunnels,” Stacy said, “and they only come out at night. They are strong swimmers. They have a body design that allows them to dive deep and withstand pressure from the water.”

Grandpa was brought to the center after suffering an eye injury. He now has only one eye and is no longer considered safe to be re-released into the wild.

Also making the trip was a northern fulmar — not to be called a “seagull.” This one suffered from maladies of the man-made variety.

“His name is Nurdle,” said Saranpaa. “He’s named Nurdle because these birds eat plastic in the environment called ‘nurdles.’” Saranpaa passed around a jug of plastic pellets that had been removed from the birds’ stomachs.

“For hundreds of years everything on the surface of the ocean was edible,” Saranpaa said.

“Plastic fills them up,” Saranpaa said. “It doesn’t pass through them and they don’t throw it up. They feel full and they’ll starve to death. If that doesn’t kill them the plastic will leech nutrients from their bodies and kill them that way.”

And while the northern fulmar have trouble expelling the plastic they ingest, throwing up is something they’re otherwise wont to do.

“fulmars love to regurgitate,” Saranpaa said. “Their defense is actually puking up on you. It is awful — this gross, yellow, chalky, chunky stuff.” And while Nurdle didn’t do it too often, other cages at the center have marked with warnings: “I’m a spitter — look out!”

“In the wild there is a practical use for that defense against other birds,” Saranpaa said. “When they throw up on bird with waterproof feathers that help them float, they loose the waterproofing and can’t swim. That bird will either become water-logged and drown or become hypothermic and die.”

Also presented were a pair of common murres, who can be found on Haystack Rock.

“They do not have nests,” said Stacy. “They lay their eggs right out on the rock.”

“They are fairly monogamous,” Stacy added. Even at the center the birds couple up, the reason why two of them made trip to the lecture together. They’re more comfortable that way.

“I probably get more calls about murres than anything else,” Saranpaa said. “We took in over 700 common murres in 2014 alone.”

Many of the murres are injured after being wrapped up in fishing lines, or being battered in the surf after failing to achieve flight as youngsters.

Finally, there was Flynn, an American kestrel falcon. Flynn was brought in with a broken left wing, injured foot joint and a split beak. He still has trouble with the wing.

“American kestrels are the smallest of the North American falcons,” Saranpaa said. “You’ll see them, especially driving around country roads and fields. You won’t see them on Haystack Rock.”

Saranpaa also shared the challenges of running a nonprofit organization.

“Since we’re a nonprofit we don’t have the resources to fix every single fractured bone,” he said

About half the birds are returned to the wild.

Cost for care, he said, quickly adds up. While a bald eagle is in rehab, it needs a $17 duck to eat every day. The center pays $20,000 for fish alone. Large orders of mice also add up. Then there are the thousands upon thousands of gallons of water needed fill, clean, and refill pools so that the seabirds can swim.

“We’re funded by public donation,” Saranpaa said, addressing the crowd specifically. A number of them would make donations before the evening was over.

Saranpaa also extended thanks to the City of Cannon Beach, which he said had regularly given annual grants of about $5,000.