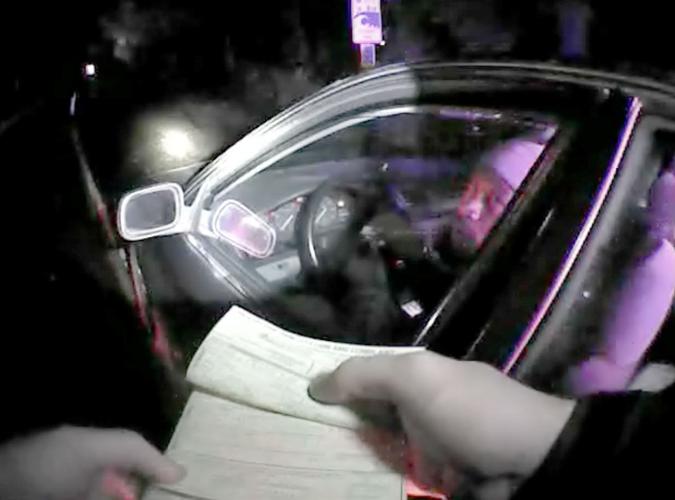 A police officer tries to present a citation to Acharmu Crosby. 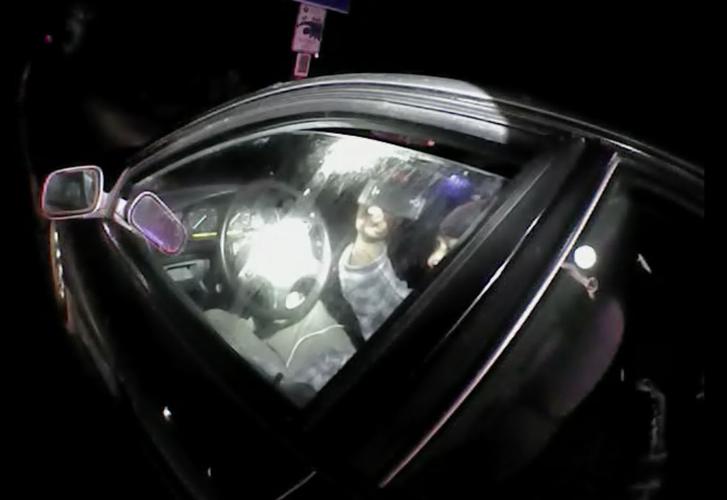 Acharmu Crosby was charged with illegally recording a December traffic stop in Cannon Beach where he was cited for a defective headlight and failure to present his driver's license.

A police officer tries to present a citation to Acharmu Crosby.

Acharmu Crosby was charged with illegally recording a December traffic stop in Cannon Beach where he was cited for a defective headlight and failure to present his driver's license.

On New Year’s Day, a new law took effect in Oregon that explicitly allows people to record traffic stops or other interactions with police.

Troubled by a gray area in the state’s wiretapping law that permitted recording only when all participants in the conversation were specifically informed, state lawmakers refined the law to provide clarity and greater transparency in an era when law enforcement is under keen scrutiny.

But that clarity came too late for Acharmu Crosby.

The 41-year-old roofer, who lives in Wheeler, was cited by Cannon Beach Police in December for a defective headlight and failing to present his driver’s license after a routine traffic stop on U.S. Highway 101 that nearly spiraled dangerously out of control.

Crosby recorded portions of the traffic stop on his cellphone in plain view of the police officer who issued him the citation and who was also recording with a body camera.

When Crosby showed up last week at Clatsop County Circuit Court to fight the citation, he was stunned and angry when he was handed a new charge of illegally recording the traffic stop, booked into county jail over his vehement objections, and released pending future court dates.

Cannon Beach Police did not recommend the illegal recording charge. The police officer’s incident report and body camera footage clearly show the officer knew Crosby was recording. But David Goldthorpe, a deputy district attorney, decided to bring the extra charge because Crosby apparently did not verbally indicate he was recording.

Goldthorpe signed off on the new charge on Dec. 30. He said he was not aware that state law would change two days later and remove any ambiguity over whether Crosby could legally record the traffic stop.

“That’s a surprise to me. I had no idea when I signed it,” he said.

The American Civil Liberties Union of Oregon, in advice called “Know Your Rights,” urges people who are stopped by police while driving to show their driver’s license, vehicle registration and proof of insurance.

Failure to carry or present a driver’s license is a misdemeanor and an arrestable offense under state law, but police can only detain drivers for as long as reasonably necessary to verify identity.

Veteran police officers say most drivers who refuse are trying to conceal their identities to avoid legal hassles such as warrants. Most drivers with nothing to hide usually hand over their licenses when asked.

But not everyone has a benign view of police.

“My mindstate is that I don’t want to be shot by some guy in a uniform. This guy is armed,” Crosby, who is black, told The Daily Astorian. “Because police in America kill black men.”

Crosby has a felony criminal history in California. He also has a history of aggressively — some might say, stubbornly — asserting his opinion of his rights. As a prisoner, for example, he unsuccessfully challenged California’s parole system as unconstitutional, refusing to sign parole conditions in defiance that kept him in prison longer than his original sentence.

In Oregon, according to case records, Crosby had previously only been cited for speeding.

When Crosby saw the flashing lights behind his 1994 Honda Accord on Dec. 11 near Cannon Beach, he dreaded what might happen next and had a cellphone ready to record.

The Cannon Beach police officer, both his body camera footage and Crosby’s recording show, explained that Crosby was pulled over for a defective headlight and asked for Crosby’s driver’s license.

Crosby demanded to know the specific statute and held up his cellphone near the driver’s side window.

“Sir, this is a very simple process,” the Cannon Beach officer said. “All we need is your license. I’m just going to check and make sure that you have a valid driver’s license, no warrants, and you’ll be free to go.”

“What is the law?” Crosby insisted.

After walking back near his vehicle, the Cannon Beach police officer called for backup because he thought Crosby was being uncooperative.

Within a few minutes, after checking Crosby’s license plate number, the officer was pretty sure of his identity.

A Gearhart police officer arrived at the scene, and the Cannon Beach officer told him Crosby was being “argumentative” and was “audio and video recording the entire stop.”

The Cannon Beach police officer was cautious. “I’m not sure that it’s worth turning this into a ‘use of force’ incident just to identify him,” he said.

In a back-and-forth that was both exasperating and at times comical, the Cannon Beach officer tried to get Crosby to turn over his driver’s license while Crosby persistently refused, claimed he was being unlawfully detained, and asserted his constitutional rights. At one point, Crosby placed his driver’s license on his leg and the officer saw that it matched the name and other information from the license plate search.

After consulting with a Seaside police officer and a Clatsop County Sheriff’s Office deputy who had also arrived as backup, the Cannon Beach officer chose to write Crosby a citation, read him the specific statutes and inform him of his court date.

As the two were talking, the Seaside police officer placed a spike strip in front of Crosby’s car that would puncture his tires if he tried to drive away.

“It’s not an offer, sir,” the Cannon Beach officer responded. “You can accept it or not. It’s your choice.”

Crosby started his car. The Seaside police officer, who was on the passenger side, shined a flashlight into the car and drew his gun.

The Cannon Beach officer backed away. “This just went downhill,” he murmured.

“What do you see that we don’t?” the Cannon Beach officer asked the Seaside officer, who said Crosby was going to take off.

“I know. He’s just refusing to accept the citation, though,” the Cannon Beach officer said. “We don’t have to force it.”

The sheriff’s deputy suggested putting the citation on Crosby’s windshield under the wiper.

One last time, the sheriff’s deputy asked Crosby if his name was “Crosby.”

“You’re free to go. Have a nice night,” the sheriff’s deputy said. “The ticket is up there for you.”

While the gun is not visible in the Cannon Beach police officer’s body camera footage, and Crosby had stopped recording at some point, Seaside Police Chief Dave Ham confirmed to The Daily Astorian that the Seaside officer drew his weapon.

Crosby said he chose not to raise his cellphone and try to record the Seaside officer with a gun out. “That would have been a bad idea,” he said. “The evidence would have been on the phone, but I wouldn’t have been here to present the evidence.”

Oregon’s wiretapping law had previously hinged on what constituted whether someone who was recording “specifically informed” all participants in the conversation.

Holding up a cellphone does not necessarily mean someone is capturing audio of the conversation.

Even though the Cannon Beach police officer informed Crosby he was recording the traffic stop with his body camera and knew Crosby was also recording him, Goldthorpe said the burden was on Crosby to verbally inform the officer.

“The burden is on the person recording,” he said.

But state law was more gray than black-and-white.

The Oregon Court of Appeals, in State of Oregon v. Neff in 2011, reversed the conviction of a man who had secretly used his cellphone to record a traffic stop in Eugene because the police officer had announced that the officer was recording the encounter.

Goldthorpe said he did not know state law was about to change on Jan. 1 when he charged Crosby with illegal recording. What if he had known?

“It’s totally hypothetical, so I’m not sure, had I known, what I would have done at that point,” he said.

The new law, which passed the state House and Senate and was signed by Gov. Kate Brown last June, allows people to record police officers performing official duties as long as the recording is made openly and in plain view of the participants in the conversation.

The revision removed any hair-splitting over whether the recording is audio or video.

The ACLU of Oregon used to have a smartphone app to record police that only covered video because of concerns that audio might get people into legal trouble. The “Mobile Justice” app was relaunched in November to include audio as the ACLU celebrated the new “Right to Record” law.

In 2011, the 1st U.S. Circuit Court of Appeals in Massachusetts, ruling in Glik v. Cunniffe, found that a man had a First Amendment right to use his cellphone video camera to record police arresting a young man on the Boston Common.

In 2012, the 7th U.S. Circuit Court of Appeals and a U.S. District Court in Illinois, deciding in ACLU v. Alvarez, backed the ACLU’s challenge to an Illinois law prohibiting the audio recording of police without consent as a First Amendment violation.

The U.S. Supreme Court chose not to hear the Illinois case, so the ruling stands.

The ACLU and others also reference a May 2012 letter from the U.S. Department of Justice’s civil-rights division to the Baltimore Police Department that said police policies “should affirmatively set forth the First Amendment right to record police activity.”

State Rep. Lew Frederick, D-Portland, who sponsored the new law in Oregon, cited the fatal police shooting last April of an unarmed black man after a traffic stop over a brake light in North Charleston, South Carolina, as an example of the value of recording police. A bystander captured video of the incident that showed the white police officer shooting the man as he ran away. The police officer was charged with murder and fired.

“When it comes to racial situations, frankly, the black community has been seeing this kind of thing take place for years,” Frederick said. “But, of course, it was one person’s word against the police officer. And the police officer was always considered to be the one who was correct.”

Frederick said he hopes the new law will help “bring back a sense of credibility to the police. It’s going to take awhile, because there’s been such damage done by seeing some of the bad actors.”

Crosby has met with a court-appointed defense attorney and has court dates scheduled for February and March on the three misdemeanor charges.

One of those charges — failure to present his driver’s license — could have been avoided had Crosby simply complied with the police officer’s request for his license.

Even more sobering, though, is how close a question about a defective headlight nearly escalated into something tragic.