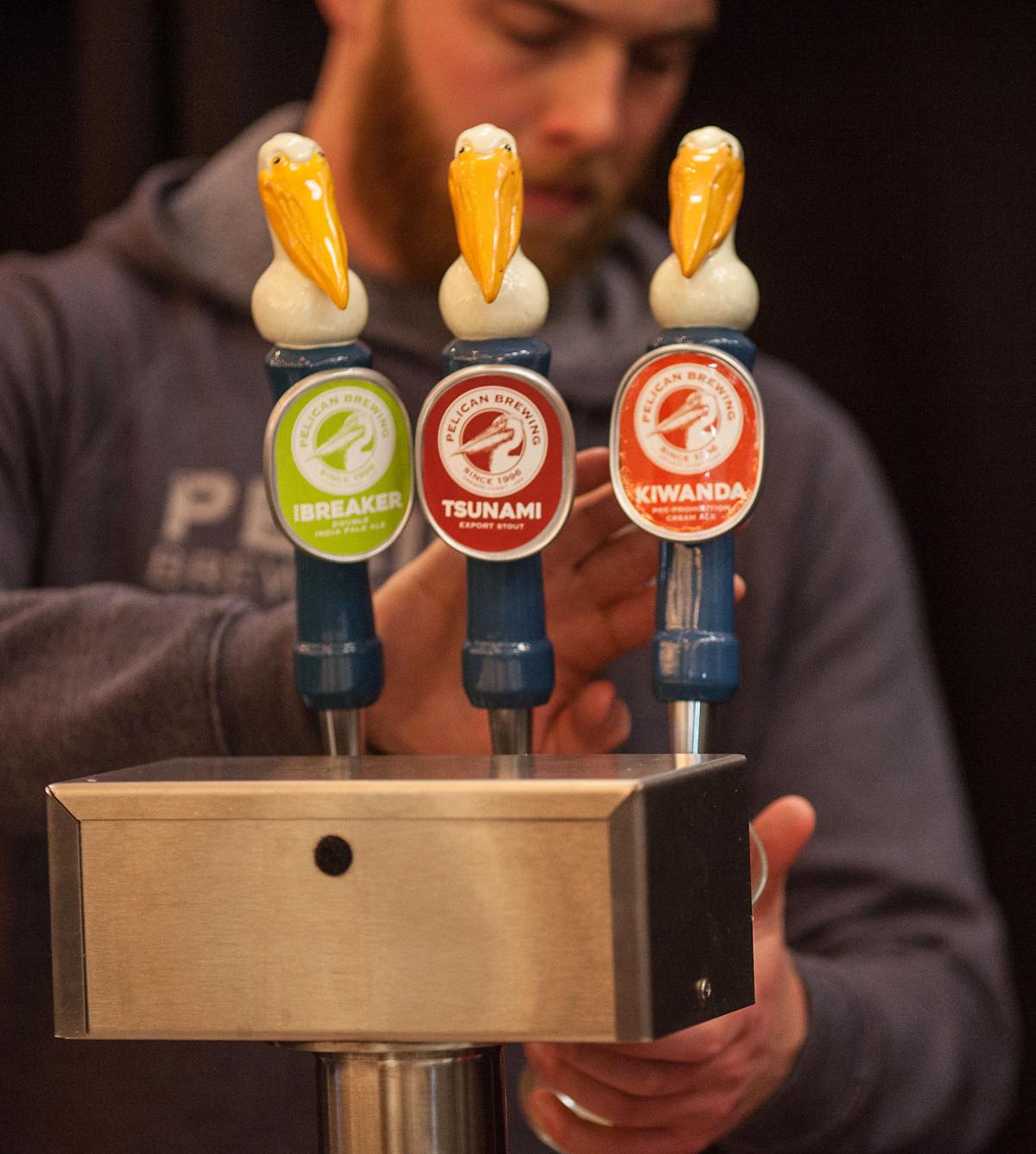 DAMIAN MULINIX/For EO Media Group An attendant from Pelican Brewing pours a glass of Kiwnda Cream Ale Saturday during Pouring at the Coast in Seaside. 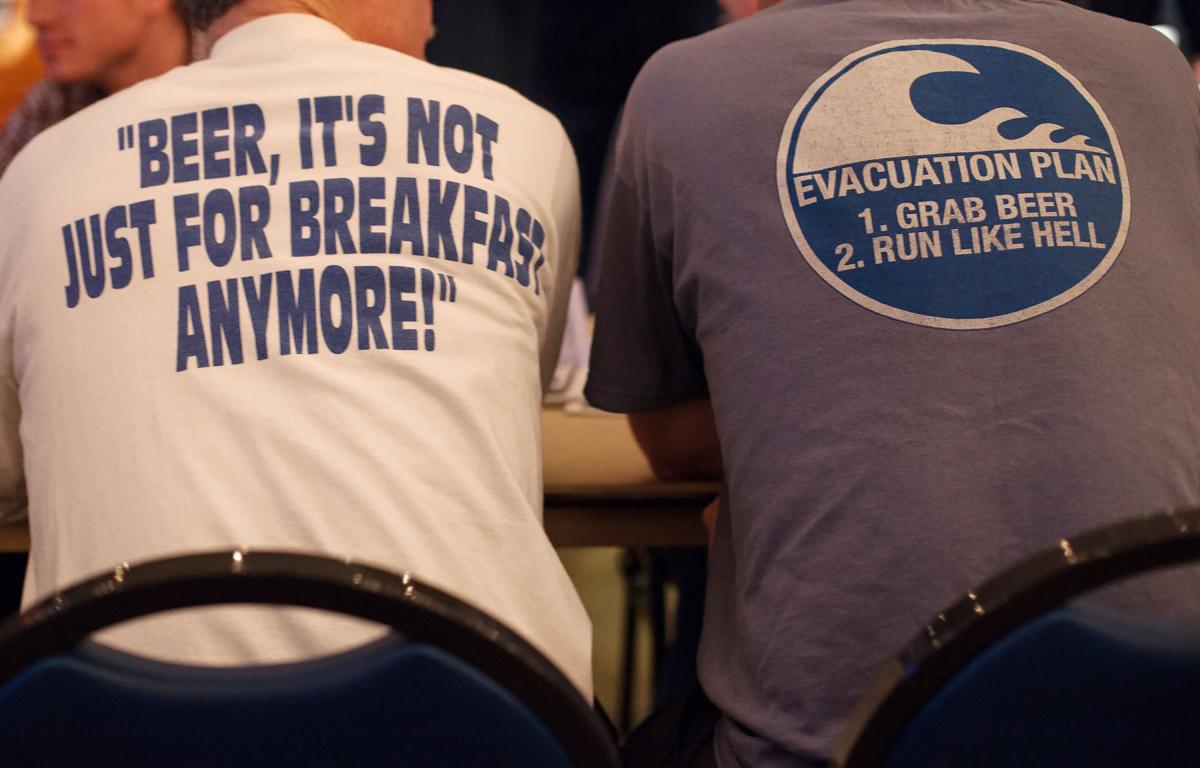 DAMIAN MULINIX/EO Media Group Beer-related T-shirts were not hard to find Saturday during the Pouring at the Coast event in Seaside.

DAMIAN MULINIX/For EO Media Group An attendant from Pelican Brewing pours a glass of Kiwnda Cream Ale Saturday during Pouring at the Coast in Seaside.

DAMIAN MULINIX/EO Media Group Beer-related T-shirts were not hard to find Saturday during the Pouring at the Coast event in Seaside.

The “brotherhood of brewers” was on display at the Seaside Civic and Convention Center Saturday for the Pouring at the Coast craft beer festival. Beer fans from throughout the Pacific Northwest grabbed a glass and had a sip at the fest, presented by the Seaside Chamber of Commerce.

“The coast is a destination and the people who live here, we’re superentrenched in our communities,” Seaside Brewing Co. owner and festival founder Jimmy Griffin said. “We’re here to stay and we just pour ourselves into these beers.”

Will Leroux of Public Coast Brewing, the newest entry to the beer scene in Cannon Beach, poured a tangerine IPA and a blonde ale.

“I was a chef for about 30 years,” Leroux said. “I’ve been brewing for about 1 1/2 years and everybody has welcomed me with open arms. It’s a brotherhood, not a competition.”

“This event is huge,” Logan Marks of Stickmen Brewing Co., based in Lake Oswego, said. “For a brewery our size, it means the world.”

Marks was pouring Stickmen’s F1 IPA. “We dry-hop it twice,” he said. “It’s super aromatic, with a nice fruity body.”

Brent Nygard from RiverBend Brewing Co. poured an oatmeal stout and an IPA.

A small Bend brewery with a capacity of only 5,000 barrels, Nygard said the Seaside festival allows his brewery “to reach out and get our beers out there.”

Dan Hamilton founded Buoy Beer in the garage of his house in Seaside. “It’s a fantastic thing to see craft beer really bring people out,” Hamilton said. “We’ve got people of all ages and all taste-bud sets.”

Hamilton said Buoy Beer focuses on traditional European lager beers and Northwest ales. “We have some protocols in the brew house that border on philosophy,” Hamilton said. “We use extremely clean yeast strains. The brewers are very dedicated to making sure the beers are absolutely balanced.”

Shaun Barrick, head brewer with Astoria Brewing Co., said of Astoria’s six breweries: “We all kind of fill a different niche in the market and get along great, so the more the merrier, as far as I can see. Craft beer is such a great boon. It helps keep dollars in local communities, it provides jobs and a great outlet for creative energy.”

One of the most creative pouring stations — and certainly the one with farthest distance traveled — was Melvin Brewing from Jackson Hole, Wyoming.

Co-founder and “Field Hoperative” Jeremy Tofte high-fived customers and donned an animal costume — moose? bear? donkey? — while beeristas offered tastings of Melvin’s 2X4 Double IPA, winner of “a bunch of gold medals all over the world,” according to Tofte, a Portland State University grad who described Jackson Hole’s brew scene as “burgeoning.” Tofte is on the fast track for celebrity — he’s profiled in this week’s issue of the national Men’s Journal magazine.

Is there a particular North Coast brewing style?

“As a region, people sense we really care about what we’re doing and the quality of these beers,” Griffin said. “You’ve got to be a weird duck to live on the north Oregon Coast. It’s not a normal thing. So we’re not normal brewers. And we make beers that aren’t normal either. People are really drawn to that.

“I think the North Coast scene is exploding because it’s unique,” he added. “It’s got its own flavor. It’s very eclectic.”