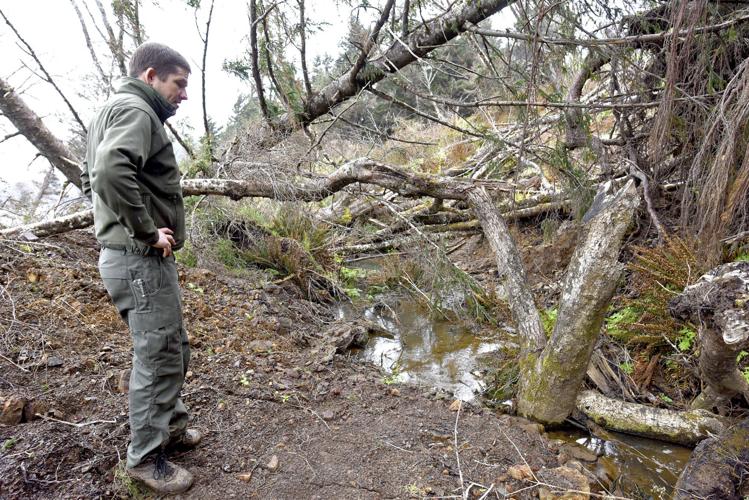 Ecola State Park Ranger Bo Ensign surveys damage caused to parts of the park from landslides due to unusually heavy rainfall earlier in the year. 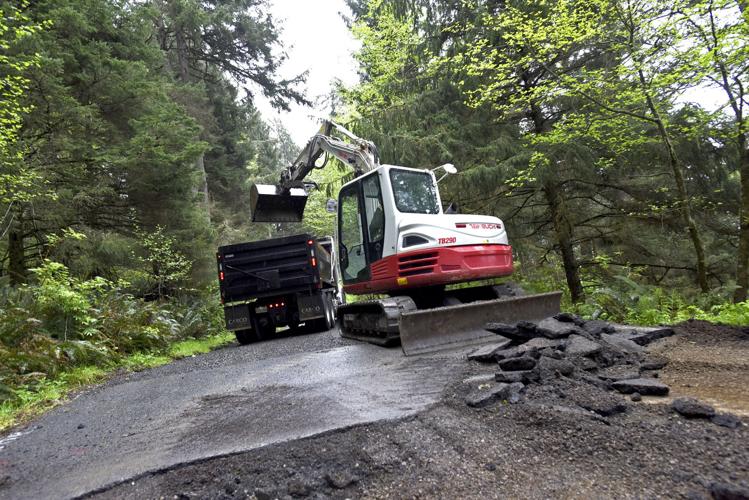 Heavy construction equipment was brought to Ecola State Park last week to repair damage from a series of landslides that occurred in multiple locations in the park. 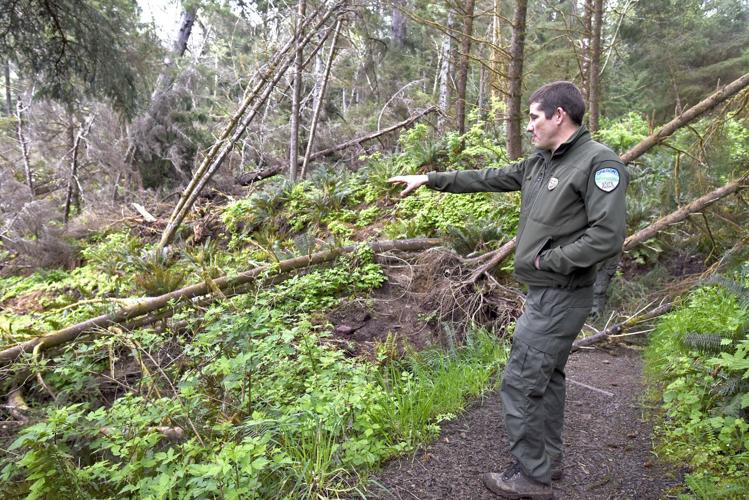 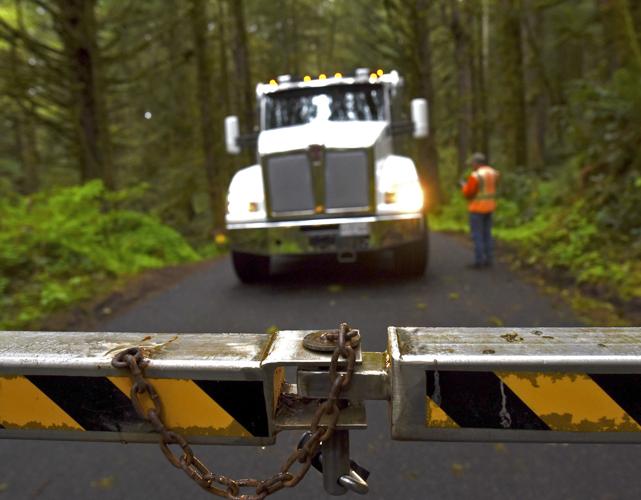 Parts of Ecola State Park were closed to vehicle traffic last week as crews worked to repair damage to roads and trails caused by landslides. 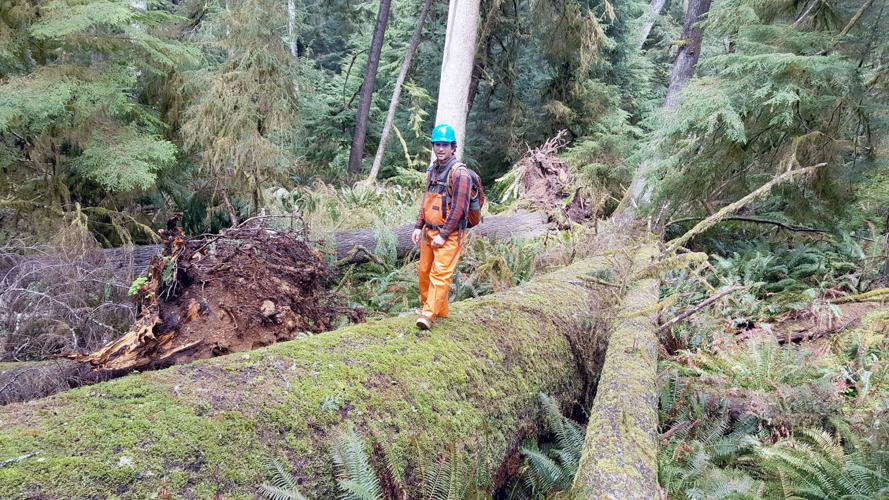 Ed Kessler, principal owner of Ptarmigan Ptrails, the company hired by Oregon State Parks to scout new hiking trail routes around the slide area at Ecola State Park, stands on an enormous spruce tree that succumbed to the slide.

Ecola State Park Ranger Bo Ensign surveys damage caused to parts of the park from landslides due to unusually heavy rainfall earlier in the year.

Heavy construction equipment was brought to Ecola State Park last week to repair damage from a series of landslides that occurred in multiple locations in the park.

Parts of Ecola State Park were closed to vehicle traffic last week as crews worked to repair damage to roads and trails caused by landslides.

Ed Kessler, principal owner of Ptarmigan Ptrails, the company hired by Oregon State Parks to scout new hiking trail routes around the slide area at Ecola State Park, stands on an enormous spruce tree that succumbed to the slide.

Erosion, winter storms and landslides have shut down Ecola State Park multiple times and cut a popular trail in two in the past year and a half.

Now, more than 40 years after a 1975 park master plan highlighted these same problem areas, the Oregon Parks and Recreation Department is examining some of the same solutions proposed back then.

“The problems at the park date back decades,” said Chris Havel, associate director for the parks department, “and the solutions are really rather difficult if we’re going to stick with the current entrance. And that’s where things get sticky.”

To reroute the washed-out trail between Ecola Point and Indian Beach is one thing. It will be labor intensive and require funds the park hadn’t budgeted for, but at least with trail-building park management is on familiar territory. A long-term fix for the road leading into the park is another dilemma entirely. Since 2015, the department has spent over $30,000 on various sections of Ecola Park Road.

Planners at the time proposed two different access routes: One that used the current road but branched off to intersect with an undeveloped access road, Radar Road, that enters the park from its eastern end near Tillamook Head. The other option abandoned the original road and suggested direct access from U.S. Highway 101 via Radar Road.

“Both access alternatives would require acquisition of private property,” the plan noted. Today, planners would also have to consider the dozens of homes that cluster in the hills below the park’s boundaries.

Park management has yet to outline a plan or come up with a new suite of possible solutions but they say any long-term proposals would require extensive scoping, meetings and conversations.

The park is looking at the areas where the land is, and historically has been, stable.

“Maybe these are areas where we’d like to relocate or plan a road,” said Cliff Serres, manager of the parks department’s engineering section.

“We’re exploring options that include an alternate route into the park,” Cox said.

Residents farther down Ecola Park Road are concerned about the road’s integrity as its condition worsened since last year. Alternative routes are virtually nonexistent, or require four-wheel drive. One resident, Les Wierson, recently presented a petition to the City Council, urging councilors to take a more active role in maintaining the stretch of road between city limits and the park’s entrance.

Meanwhile, Ecola State Park reopened after contractors tore out cracked and sliding asphalt along a portion of the road near the pay booth and replaced it with gravel. Later this year, contractors plan to replace a culvert under a section of road right before the Indian Beach parking lot.

Rangers are preparing for summer crowds — an estimated 313,808 people visit the park each year — and the seasonal increase in vehicle traffic, cars that will idle in long lines on the newly graveled road, bottlenecking at the pay booth.

The recent repairs should get them through the summer.

After all, portions of this popular park have been sliding into the ocean for as long as anyone can remember.

“Nothing’s new here under the sun,” said Serres. “These are the same issues we’ve been dealing with at the park since we became stewards of the park.”

A viewpoint that once wrapped around the side of a cliff at Ecola Point crumbled into the ocean several years ago. Every few years, park managers have to make repairs to Ecola Park Road as well as the road that dips off toward Indian Beach.

“I’d go up and visit it periodically,” said Wierson. “You could stand where the pay booth is now and you couldn’t see (the slide) move, but you could hear the trees snap.”

The scars of this massive movement of earth and trees and undergrowth were visible for a long time.

The 1975 plan identified three major landslides in Ecola State Park. Ecola Park Road bisects one of these slides. As recorded in 1975 and continuing through today, the slide continues to damage the road.

Slides have impacted the park’s ability to get water and electricity to its ranger and visitor facilities, snapping underground wires and pipes. Today, power lines are strung along poles in the slide area right before the pay booth, and water comes in through a flexible, above-ground pipeline.

The Ecola slides are slow moving. While they are dramatic in scope, they rarely present major threats to the health and safety of visitors. They do, however, threaten accessibility to the park.

The most recent landslide that washed out the trail between Ecola Point and Indian Beach last year is less a slide and more of a bulge, says Ed Kessler with Ptarmigan Ptrails, the company hired by the parks department to identify new trail routes around the slide.

Softer material is sliding out of a half-mile-wide crown, Kessler said, creating a bottleneck between bedrock. Water that rangers can hear trickling through the woods has no obvious above-ground source, until they see it shooting out from underneath the landslide debris.

The slide area is shaped a bit like the letter “U,” “like the cirque or bowl of an alpine mountain,” Kessler said. The arms of the “U” are the cliffs on either side, relatively solid points marching down toward the ocean. The curved base of the “U” is the ridgeline, a sort of crown of higher, solid ground that arcs between Ecola Point’s parking lot and Indian Beach. The trees that grow up there are older and taller than those below; they have withstood numerous slides over the decades. The empty space between the arms and the base of the “U” is where the ground has thundered away, sliding and bulging into the ocean. Deep fissures opened up in these hillsides, 20 feet deep in some places and 10 to 15 feet wide.

Farther down, where the trail used to be, is a river of brown mud and clay. The slide uprooted trees, sent some sliding down toward the water and slammed into others near the cliff edge, causing them to slant backward toward the ridge. It rolled undergrowth into muddy tangles and washed a small bridge dozens of feet down from its original placement on a trail segment that no longer exists. There’s an ocean view that wasn’t there before.

It is the nature of this landscape to change, says Park Ranger Bo Ensign.

As he looked over the slide area at the end of April, he had a hard time remembering what this particular portion of the trail had even looked like.

“Even what had been here is different from what it was before,” he said. Now: “It just looks like a bomb went off.”

Though park management has yet to finalize a plan, they will likely abandon this entire middle section, opting to bypass the slide zone entirely and reroute up to the ridgeline. They may decide to provide a few in-and-out trails down to familiar viewpoints to preserve some of the characteristics of the original trail. The reroute is expected to cost between $20,000 and $50,000.

The route proposed by Ptarmigan Ptrails would travel from high point to high point — from the surviving end of the trail at Ecola Point, up to the solid ridgeline above the slide, and then back down to meet the piece of untouched trail that comes up from Indian Beach. Cox and the rangers say they are excited to show hikers something new.

Kessler describes a rich landscape above the slide: Open spaces filled with mature spruce trees, a spot where, with your feet on one of the few unmoving places in the park, “you are literally up in the sky seeing down to the ocean.”

At the Pumps: Gasoline prices now below $4 a gallon

At the Pumps: Gasoline prices now below $4 a gallon