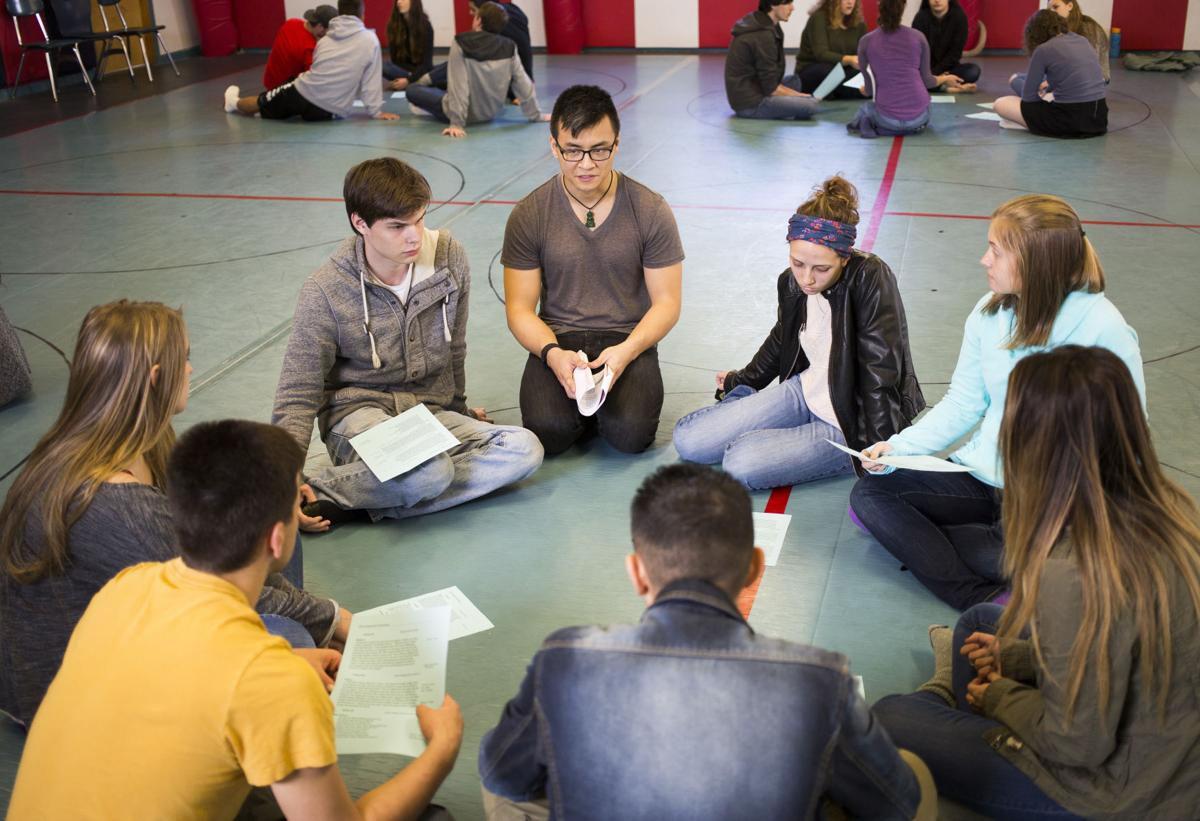 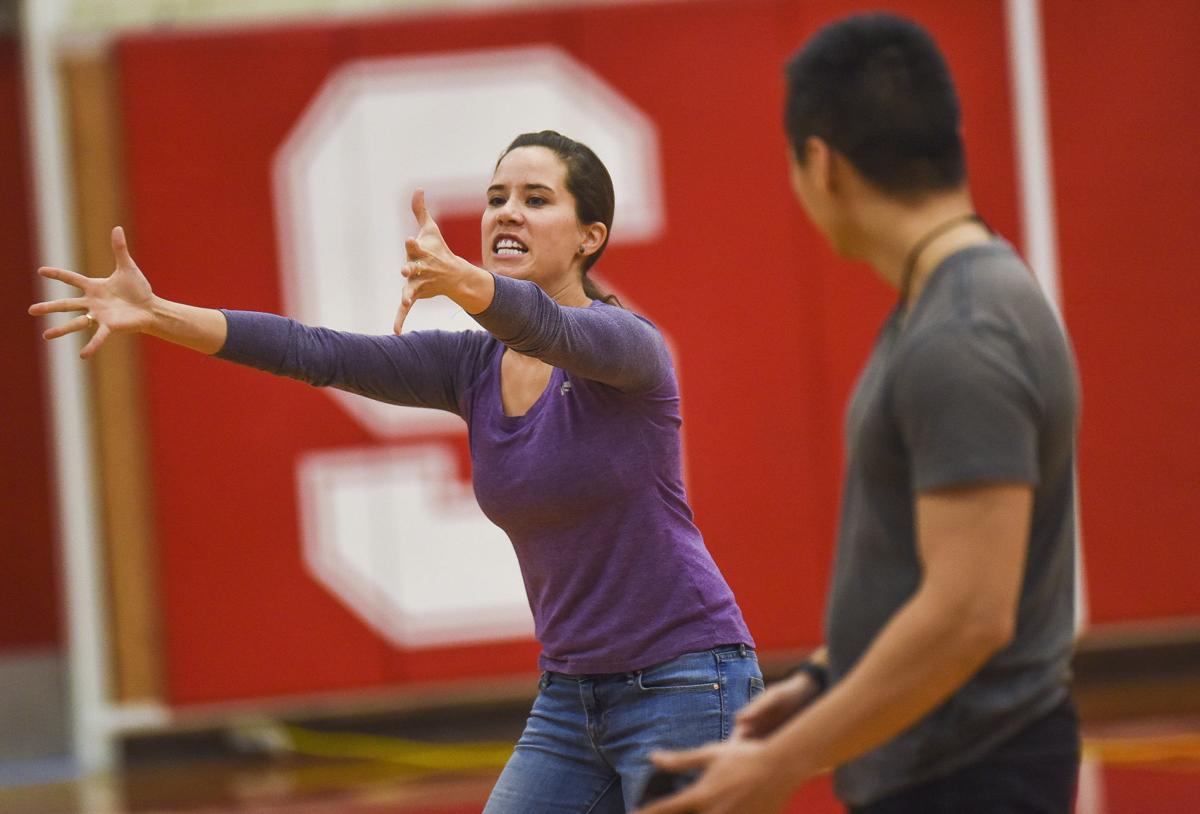 Kristin Hammargren, left, and David Huynh, with the Oregon Shakespeare Festival, perform in front of the school during an assembly at Seaside High School. 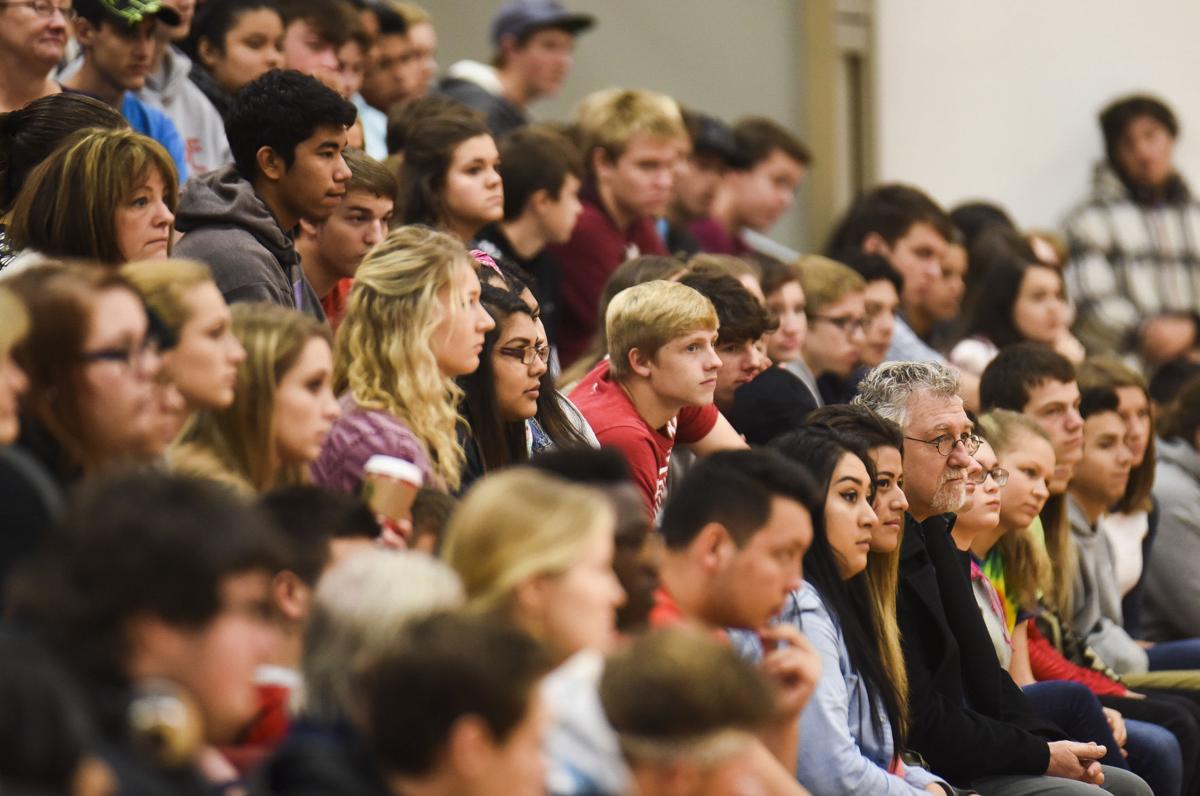 Seaside High School students and faculty listen to actors from the Oregon Shakespeare Festival perform during an assembly. 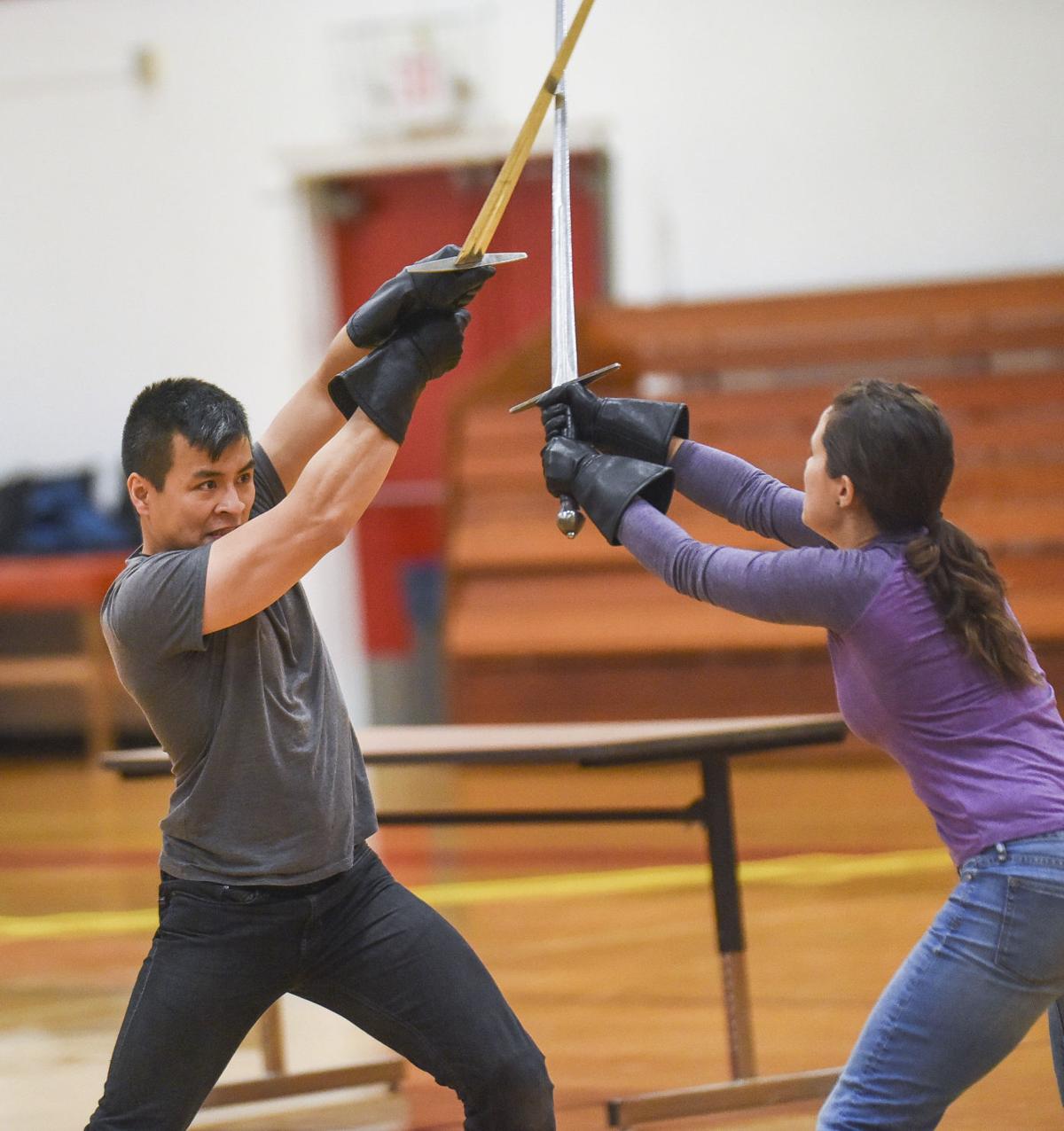 Kristin Hammargren, right, and David Huynh, actors and teachers with the Oregon Shakespeare Festival, act out a sword fight in front of Seaside High School students.

Kristin Hammargren, left, and David Huynh, with the Oregon Shakespeare Festival, perform in front of the school during an assembly at Seaside High School.

Seaside High School students and faculty listen to actors from the Oregon Shakespeare Festival perform during an assembly.

Kristin Hammargren, right, and David Huynh, actors and teachers with the Oregon Shakespeare Festival, act out a sword fight in front of Seaside High School students.

In a nod to election-year tensions, the Oregon Shakespeare Festival workshop at Seaside High School tackled a play with divisive political themes.

Gathered in the wrestling room Wednesday morning, Nov. 17, senior students in an honors English class delved into “Julius Caesar,” in which conspiring senators kill an increasingly powerful politician. Oregon Shakespeare Festival professional actors David Huynh and Kristin Hammargren, returning to the school for a second year in a row, led the workshop.

As an exercise to get in the ancient Roman spirit, students played “assassins,” in which certain students slayed senators with a deadly wrist tap. Huynh encouraged students to “be big and bold.”

Students dramatically doubled over and fell onto the padded floor after their “assassination,” crying out as they died gruesome “deaths” during the otherwise nonverbal game.

Next, students in six groups read and acted out “freeze frames” from three different takes on the same event: a festival where a character offers the crown to Caesar. To see how the point of view can alter a story, students performed the perspectives of Greek biographer Plutarch and Shakespeare characters Mark Antony and Casca, who have opposing opinions. Students then analyzed how each person felt about aspects of the story.

“I learned about what the people thought about Caesar,” Mica Paranal said after the workshop. “It was interesting how we played the assassins game.”

“I liked it because it summed up the play,” she said. “I read it sophomore year, but I don’t really remember it.”

In a performance for all students and staff, the actors — playing multiple characters — performed scenes from Shakespeare’s “Romeo and Juliet,” “As You Like It,” and more, alongside modern references. Students said they enjoyed a Star Wars-inspired part and a humorously awkward love scene.

In the afternoon, Hammargren and Huynh led another workshop and performed an abridged “Julius Caesar.”

“The workshops are great because you get a chance to give them some hands-on experience with the text, which can sometimes be very intimidating,” Hammargren said. “We’ve got all these great ways of breaking down the text and making it physical. It ends up being fun and rewarding for us to see the students understanding it and being able to discuss it.”

“Sometimes the students surprise me with how astute and aware they are,” Huynh said. “Some of the best talks that we’ve had on the three perspectives involve subconscious bias and how that shapes our world view.”

English teacher Susan Baertlein appreciates the impact the program has.

“To see actual Shakespearean actors at our school and have all our students exposed to that is huge,” she said. “It’s enjoyable for the staff, and the students get a lot out of it.”

Baertlein said it’s important for students to see Shakespeare performed, as his works are “meant to be seen, not read.”

“The way they do their workshops and performances, there’s a focus on the big ideas from the text and not all of the little details that weigh kids down,” Baertlein said. “Focusing on the themes and the point of the whole play, what message they are trying to convey, helps the students understand it better.”