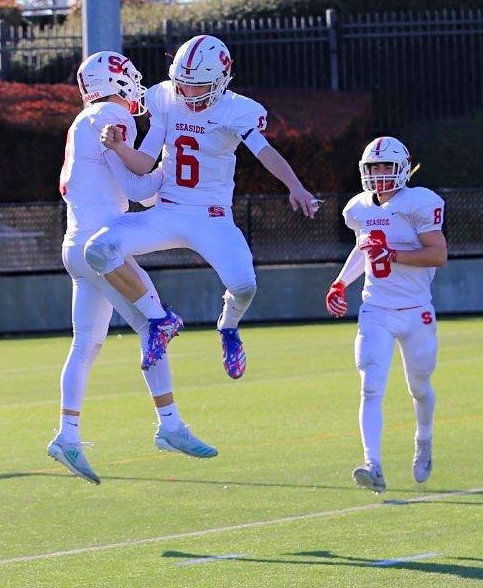 Seaside quarterback Payton Westerholm (6) celebrates more points on the scoreboard for the Gulls.

Brayden Johnson crosses the goal line after catching a pass from Alexander Teubner in Saturday's win over Gladstone. 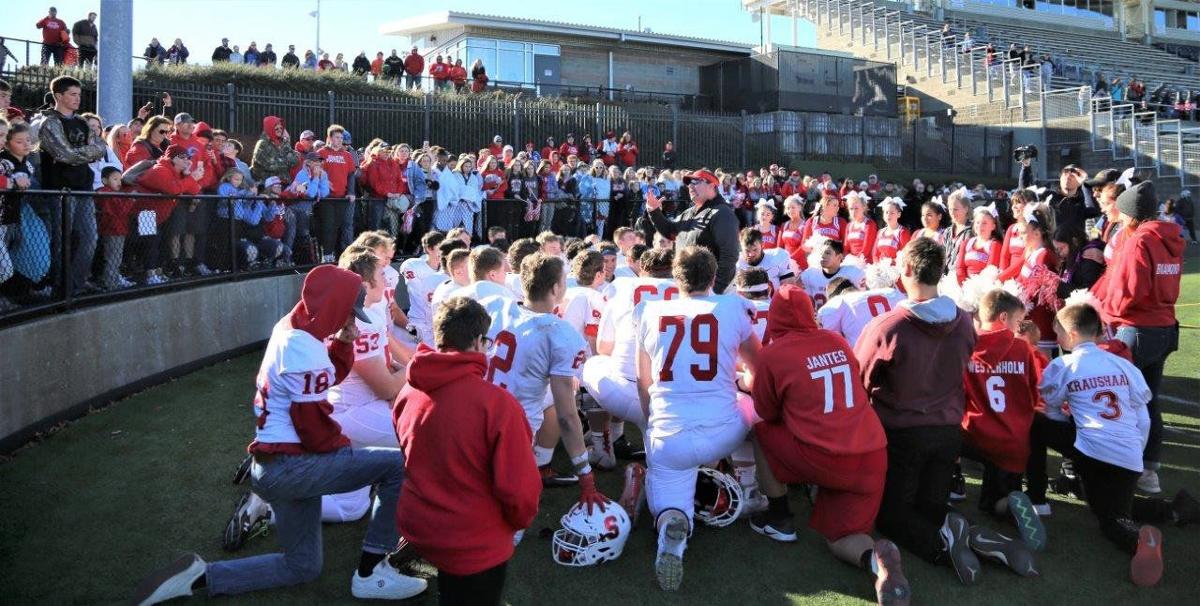 Seaside coach Jeff Roberts talks to his team and the Seaside fans, moments after the Gulls wrapped up their semifinal victory. 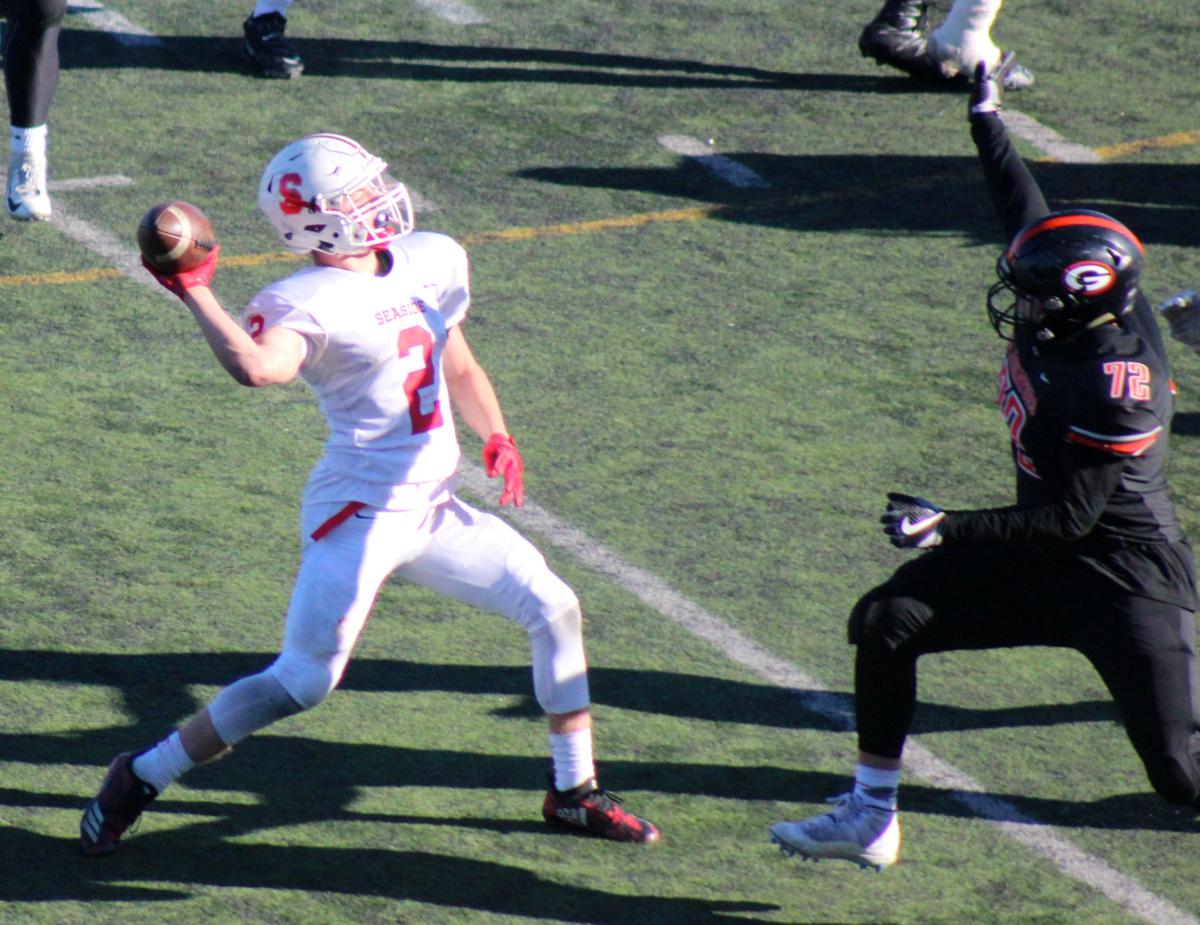 Seaside's Alexander Teubner gets ready to launch the first pass of his high school career, a 46-yard touchdown to Brayden Johnson.

Seaside quarterback Payton Westerholm (6) celebrates more points on the scoreboard for the Gulls.

Brayden Johnson crosses the goal line after catching a pass from Alexander Teubner in Saturday's win over Gladstone.

Seaside coach Jeff Roberts talks to his team and the Seaside fans, moments after the Gulls wrapped up their semifinal victory.

Seaside's Alexander Teubner gets ready to launch the first pass of his high school career, a 46-yard touchdown to Brayden Johnson.

HILLSBORO — Nowadays, it seems that every high school sports team in America has a slogan. Often more than one.

Something that inspires the athletes and fans, looks good on a shirt, and the school can rally around.

Seaside football has two or three slogans, but one in particular the Gulls like to post on game day: “Clear eyes, full hearts, can’t lose!”

With their latest victory — a 23-19 decision over Gladstone in the 4A semifinals — the Gulls are taking that last part literally.

Seaside has won four in a row since an Oct. 12 loss to Banks, and now the Gulls are 48 minutes away from their first state championship in football since 1994.

Combined with state titles in three other sports (golf, cross country and basketball), it would be the sixth state championship in four years for Seaside boys’ sports.

“It’s huge,” said Seaside coach Jeff Roberts. “A lot of people say ‘Seaside’s a basketball town.’ Right? And understandably so. But about six or seven years ago I went on a mission to revive the football program, and bring this back.

“Look at that (pointing to the Seaside fans). It’s unbelievable to have these people here. We’re a football and basketball town now.

“This is pretty amazing for this community. I can’t say enough about how proud I am of these kids, my coaches and these fans.”

And if he ever came across the Seaside football team, the old coach and former announcer John Madden would say, “to win, build a lead, then give ‘em a heavy dose of Alexander Teubner.”

That seems to be all it takes right now for the Gulls, who will face Banks next Saturday, time and place to be announced.

Teubner rushed for 168 yards and a touchdown on 21 carries, threw a touchdown pass (his first), and was named the OSAA’s Player of the Game for Seaside.

“We’ve been talking about (reaching the state championship) since we were in the third and fourth grade,” Teubner said. “The basketball team’s had their chance, now it’s kind of our turn to fulfill what we think is our destiny.”

The Gulls haven’t played a perfect game yet in the playoffs, but Seaside is the best team still standing in 4A football.

Seaside had three turnovers in the first half of Saturday’s playoff — all inside its own 34-yard line — but the Gladiators could only manage six points off those turnovers. In addition, Gladstone missed two point-after kicks and a short field goal, and continually shot itself in the foot with 11 penalties for 143 yards.

Meanwhile, the Seaside defense was doing its best impression of a brick wall, making the key stops when they were needed.

And it’s nice when your go-to player in the fourth quarter also happens to be the state Player of the Year.

Seaside’s catcher in baseball is also the Gulls’ closer in football, as Teubner secured the win by carrying the ball eight straight times on Seaside’s final drive to run out the clock.

“Alexander is the best offensive football player in the state at the 4A level,” Roberts said. “If he doesn’t win the Player of the Year (award), there’s something wrong. You can print that. That’s the reality of it.

“The kid has over 2,000 yards and 40 touchdowns. And he throws one today? The kid is special. Above everything, he’s a hard worker and a great team leader.

“But Gio Ramirez and Duncan Thompson have also done a great job all year, and with our offensive line, we like to run the ball and we’re going to continue to run the ball.”

High winds on the field Saturday may have led to two fumbled punts by the Gulls, and Seaside also lost a fumble at its own 34. But the Gladiators let a golden opportunity to build a first half lead slip through their hands, and resulted in nothing more than a 10-point halftime deficit.

With the wind, “Those were hard balls to field,” Roberts said. “Those things were knuckling all over the place, so we made some adjustments at the half, like not fielding punts. We turned it over in some tough spots, and the defense was awesome.”

On both of Seaside’s touchdowns in the first half, the Gulls — who were lined up to kick the point-after score — instead decided twice to go for two points when the Gladiators jumped offsides. And Seaside converted both two-point conversions.

After spotting Gladstone a 6-0 lead two minutes into the game, Seaside (eventually) responded, with a 41-yard touchdown run by Teubner to cap a four-play, 65-yard drive.

The Seaside defense forced a three-and-out, and the Gulls took the lead for good six plays later, when Teubner took a pitch from Payton Westerholm, then casually tossed a 46-yard touchdown pass to Brayden Johnson.

“That one was (put in) last week,” Teubner said. “That was my first completion, too. That worked out pretty well.”

Gladstone drew to within 16-13 on a 16-play, 80-yard drive that ate up most of the third quarter. From there, the Seaside defense rose up on the Gladiators’ next possession and stuffed a fourth down play at the Gladstone 29.

Two plays later, Westerholm scored the game-winner on a 33-yard run with 10:45 left in the game.

That was enough time for one more Gladiator score, a 23-yard pass from Jake Gehrke to J.P. Peterson.

But Seaside ran out the clock by giving the Gladiators their heavy dose of Teubner, who had consecutive runs of six, 10, 13, five and 11 yards in the final minutes.

“That’s a testament to our line,” Teubner said. “They’ve done a hell of a job all year, and they were able to give me a hole and get four or five yards.”

Westerholm converted a fourth-and-three with a five-yard run, and Teubner had two more carries for 11 yards, running his season total to 2,209 yards and 41 touchdowns.

Earlier this season, the Gulls defeated Gladstone 70-46. But it wasn’t surprising to see 74 fewer points on the scoreboard Saturday.

“We knew that 70 probably wasn’t going to happen again,” Teubner said, “and we had to play a full team game to do what we had to do and come out with a win, to play one more week.”