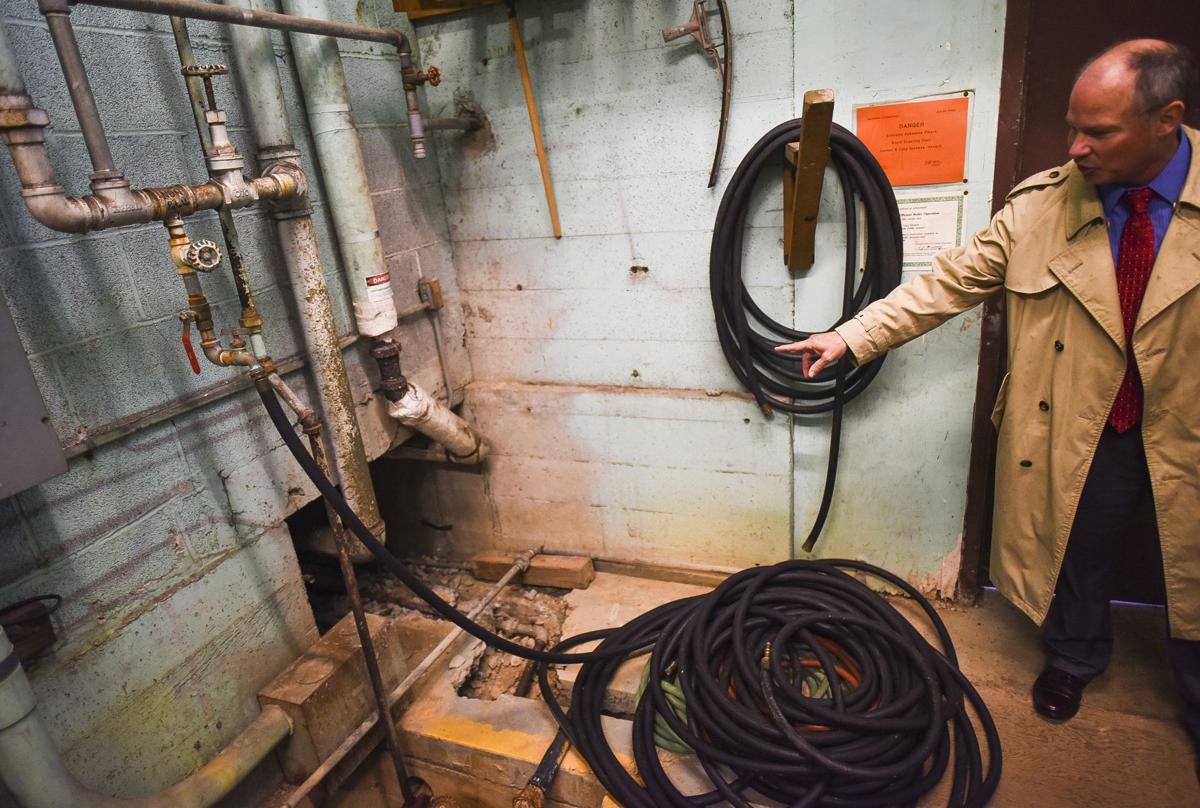 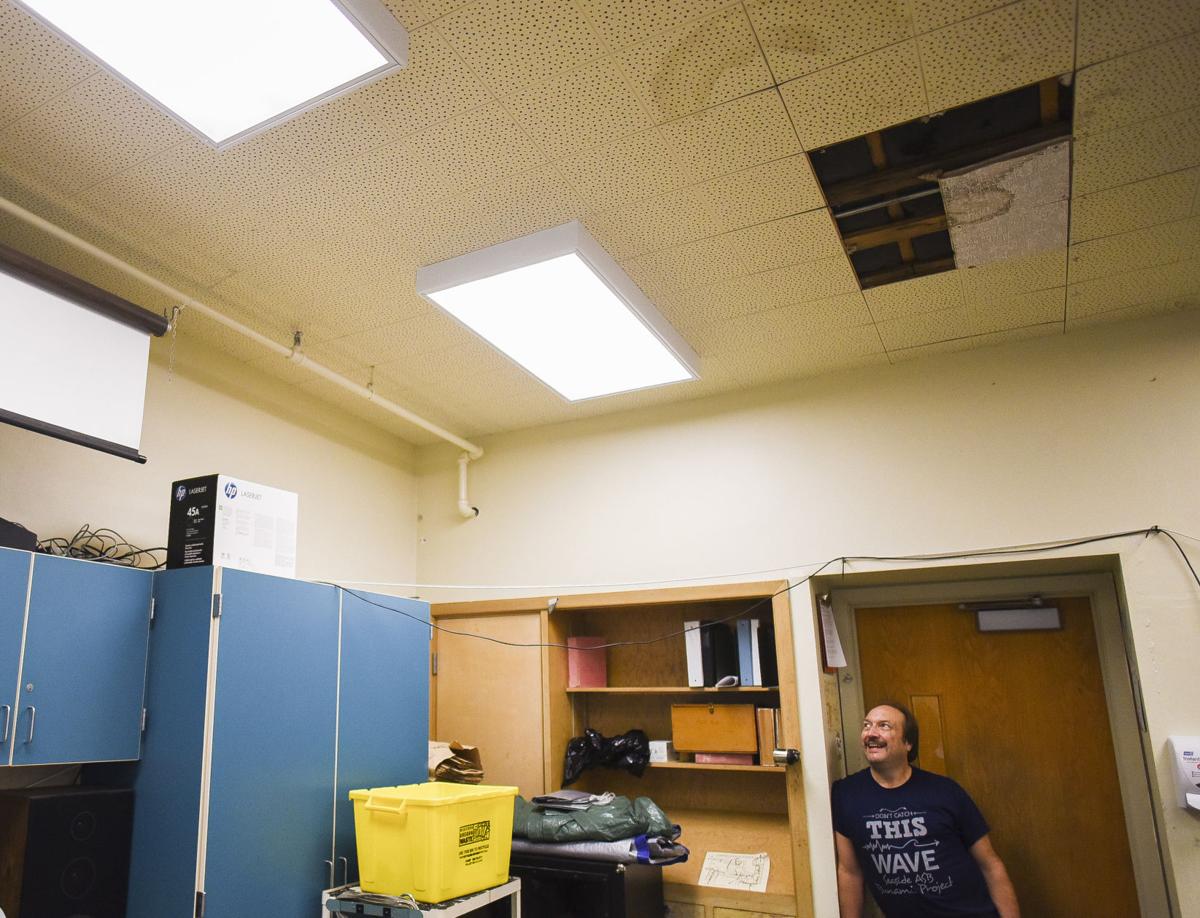 Seaside High School Head Custodian Lonnie Lear looks up at one of the panels missing from the ceiling because of water damage in one of the computer labs. 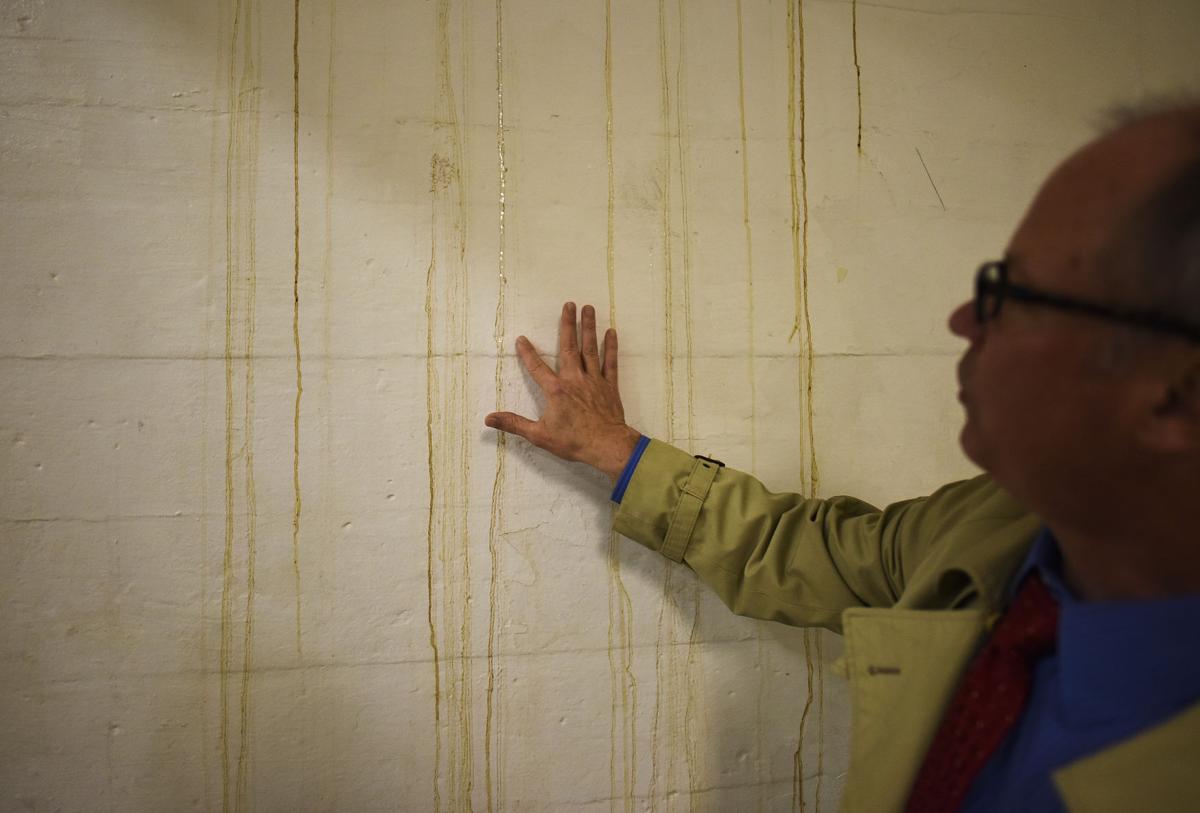 Doug Dougherty points out moisture leaking from the walls near the gym at Broadway Middle School on Thursday. 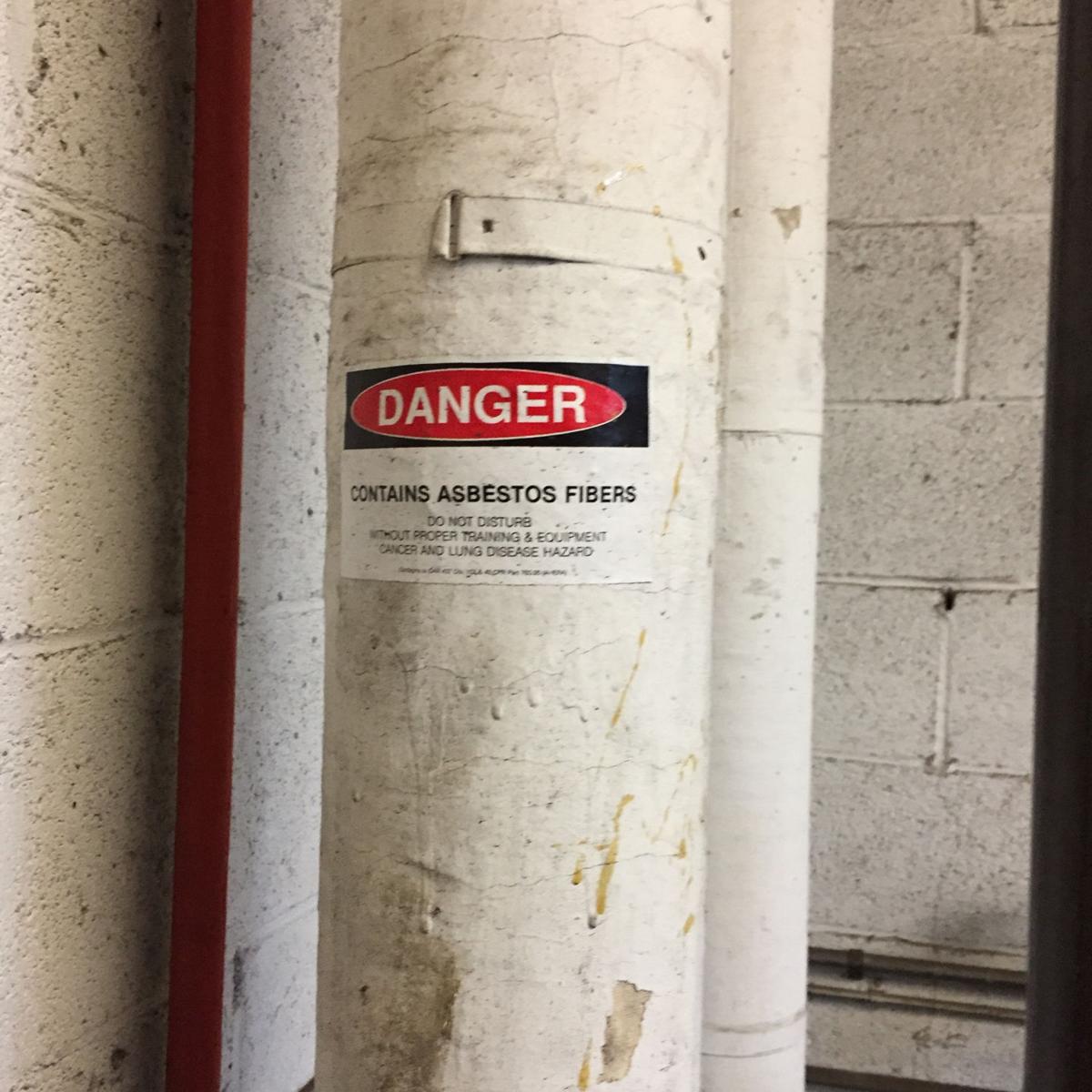 Encapsulated asbestos is a problem at Seaside's schools.

Seaside High School Head Custodian Lonnie Lear looks up at one of the panels missing from the ceiling because of water damage in one of the computer labs.

Doug Dougherty points out moisture leaking from the walls near the gym at Broadway Middle School on Thursday.

Encapsulated asbestos is a problem at Seaside's schools.

It’s one thing to hear about the crumbling condition of Seaside’s high school, middle school and Gearhart Elementary School. It’s another to take a tour and see them firsthand.

Even on a relatively good day there’s no masking the horizontal and vertical cracks on walls in each of the schools. It’s hard to miss the weird metal covers adhering to the Seaside High School gymnasium roofs, used to block rusted metal clips used as roof tie-downs that break off and fall onto the gymnasium floor. Administrators worry that one could pop out and strike a student. Replacement cost is an estimated $577,000.

On a rainy day, the buckets in the computer room fill not only with classroom trash but the steady drips from a ceiling where plugging holes is like playing whack-a-mole. Pine needles get stuck on scuppers and rainwater leaks through the building’s stucco walls and onto warped and uneven floors.

And at Broadway Middle School, a trip to the boiler room reveals a running pond forming on the ground underneath antiquated machinery, as a sump pump churns to calm the rising flow.

At the high school, head custodian Lonnie Lear maintains a Rube Goldberg-styled boiler system built decades ago. “Some of it I can fix, some of it is beyond me,” Lear said.

“A lot of our leaks go through the walls,” Seaside School District Superintendent-emeritus Doug Dougherty said as he led a tour through the building, constructed in 1958.

Nearby water pipes run through a concrete tunnel barely big enough for workers to slide in on scooter boards. Most of the tunnel is navigable, although maintenance of sprinkler pipe installed in 1993 requires getting off the board and sliding under a rail.

“In Broadway, you go under sand, and bang your knee under a rock,” Lear, who has been with the district 27 years, said. “That’s a lot of fun.”

Voters rejected a $128.7 million bond proposal to move schools out of the tsunami zone in 2013. The focus of that vote was emergency preparedness.

This time around, Dougherty hopes to draw attention to the condition of the three crumbling schools in addition to tsunami safety for passage of a pared-down $99.7 million proposal. Dougherty told the Seaside City Council this month that awareness of the risks from a seismic event are well-known now in the community. With that awareness, he has shifted his focus to the condition of the schools.

The bond’s success at the polls would lead to relocation of the Seaside School District’s three tsunami at-risk buildings to a new campus on 80 donated acres east of the highway near Seaside Heights Elementary School.

At Broadway Middle School, floors in the hallway are uneven after four different additions to the school. Dry rot surrounds the south windows. Asbestos is stuffed inside walls, tunnels and encapsulated around pipes. Walls are unreinforced masonry of cinderblock.

“Everywhere you look you’ll see where the building is basically cracking or leaking,” Dougherty said. “We keep patching them up, but they keep reappearing.”

He pointed to walls moist with water as a result of horizontal shearing and described spalling on the roof leading to corrosion and seepage.

Building inspectors monitor the schools for safety, he said, and could condemn the buildings if they become too dangerous. For eighth-grade progression five years ago, Dougherty said, the audience heard a “large boom” when the floor dropped down underneath choir members standing on risers. “About two songs in, they were not standing on risers anymore,” he said. “The risers stayed where they are, but the floor dropped down when beams collapsed underneath them.”

Gearhart Elementary School faces leaking, cracking and spalling similar to the other schools.

“You have to crawl through the tunnel to find a leak,” Dougherty said. “You never know where the leaks are until you are on top of them.”

Without tunnel lighting, maintenance workers crawl up to 250 feet in one direction holding flashlights to locate leaks and then hammer through concrete to reach encased pipes.

Sections have not been replaced since the elementary school was built in 1949.

The three schools are each about equal in disrepair, Dougherty said, but Gearhart students have no way to evacuate to high ground.