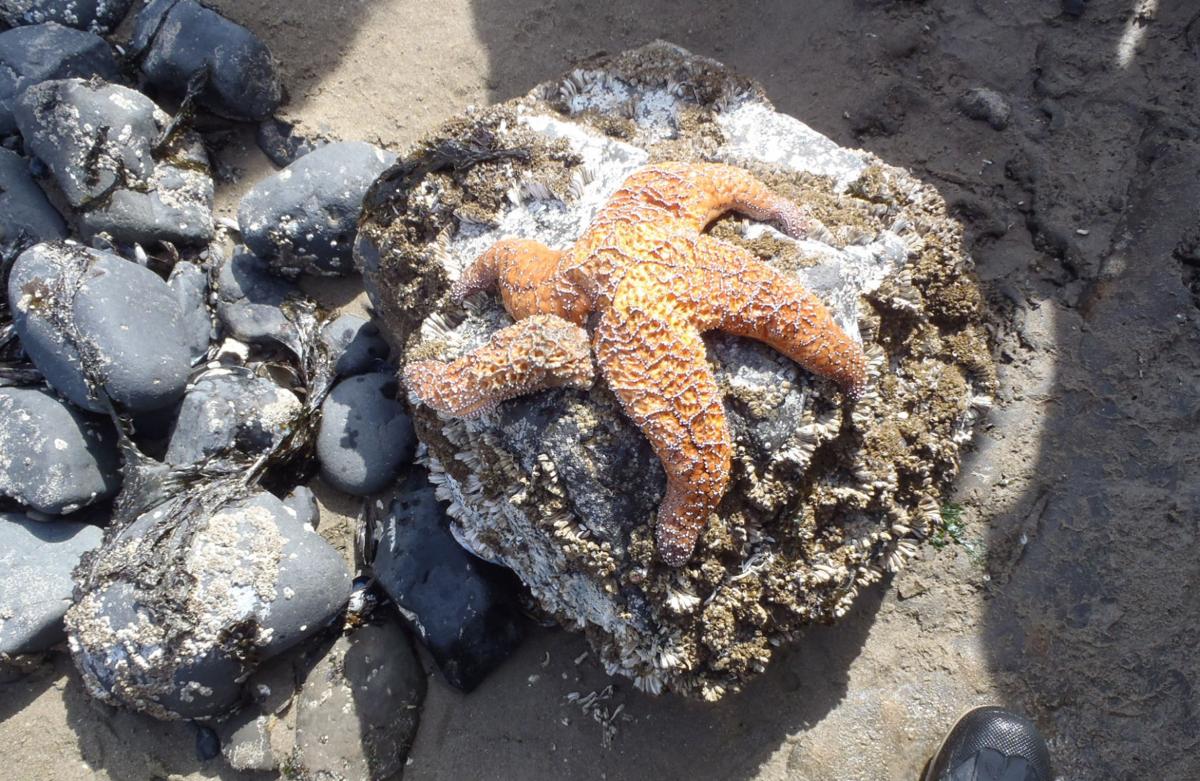 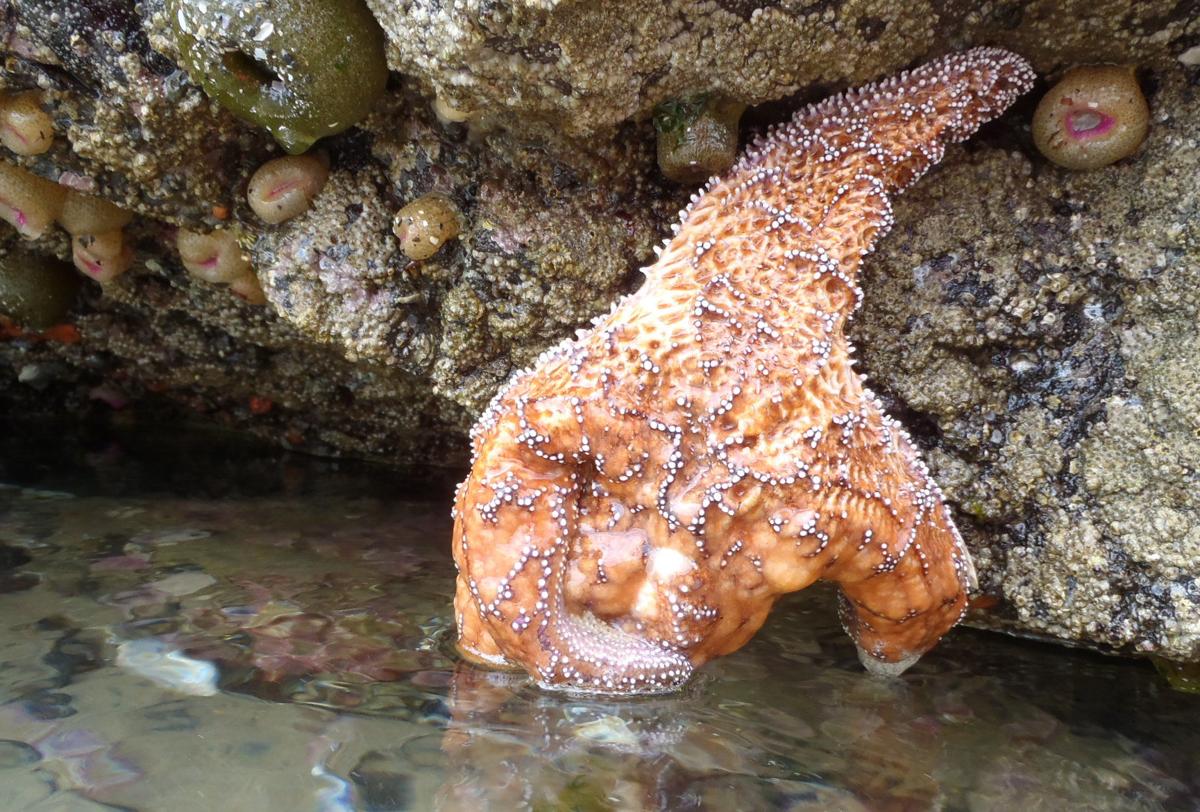 A sea star with lesions from sea star wasting syndrome hangs from a rock in Cannon Beach during spring 2014. 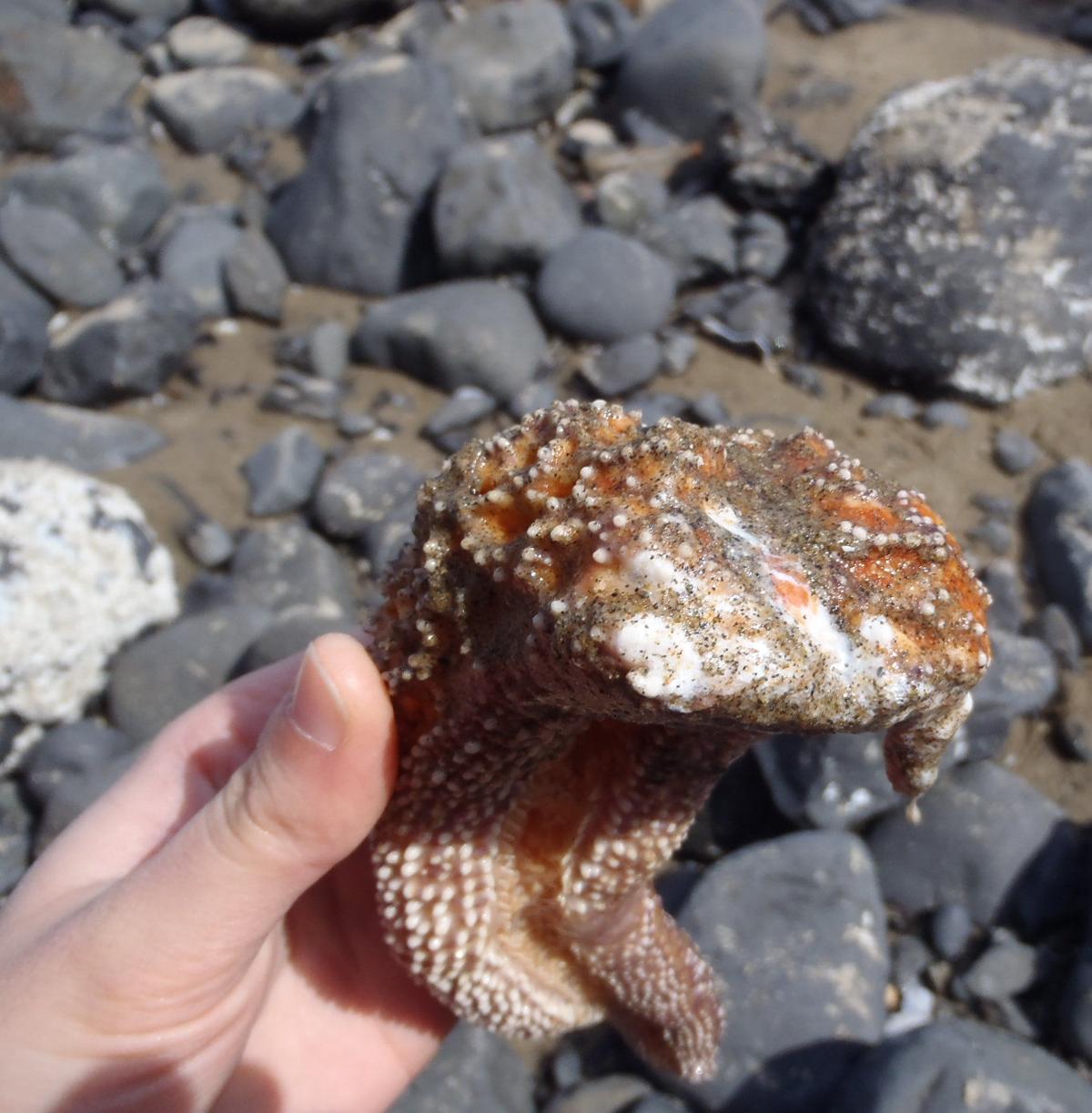 A sea star with lesions from sea star wasting syndrome hangs from a rock in Cannon Beach during spring 2014.

CANNON BEACH — Sea stars are making a comeback after a mysterious wasting disease killed off more than 90 percent of the population.

In July, Haystack Rock Awareness Program staff found 82 sea stars, mostly ochre and six-rayed starfish, at their north boulders location. Of those, only one had signs of wasting and it was a lesion restricted to one area. But it will take a long time before the species fully recovers.

Melissa Miner, a research associate at the University of California, Santa Cruz, with MARINe, the Multi-Agency Rock Intertidal Network that surveys sea stars along the entire West Coast, said populations are still low and, because they are slow-growing animals, it will likely be a decade or longer before numbers return to prewasting syndrome levels.

“There’s always this desire to be optimistic about it, but the sea stars were impacted a lot,” Miner said. “It’ll be awhile before they recover.”

No one is worried about the animals going extinct, she added.

Melissa Keyser, interim coordinator of the Haystack Rock Awareness Program, said the sunflower and ochre sea stars are considered keystone species as major intertidal predators. Because of their impact on the ecosystem, if they ever died off, “it could be catastrophic for Haystack Rock,” she said.

In July 2014, HRAP found 41 sea stars at that north boulders site and only 13 were healthy, showing no signs of the disease.

When they do contract wasting syndrome, the sea stars begin deteriorating in a matter of days or weeks, Keyser said.

The program’s east boulder at the Needles site turned out 42 sea stars in July 2015. In 2014, volunteers found 37 sea stars and 27 showed signs of the disease, including a Category 4 with severe tissue deterioration.

Miner said MARINe found some diseased sea stars, but not many during a recent resampling at five long-term and three short-term sites on the Oregon coast. “Numbers are definitely down from previous years,” she said.

But results looked different in Washington.

In June, researchers began seeing many sick sea stars in Washington’s intertidal waters again. Fishermen are still finding signs of the disease when they pull sea stars up, Miner said.

In California, the number of diseased animals was down in the spring.

Miner noted that there is a correlation with higher ocean temperatures in some areas, but not all. A warming ocean may make the sea stars more susceptible to disease or stress them out, she added.

While sea star wasting syndrome has been attributed to densovirus, Miner said it’s unknown if that is the same strain researchers witnessed in California before the epidemic.

They haven’t been able to get good tissue samples, and emergency research funding is scarce. Scientists have ideas about the cause of the virus, she said, but nothing definitive.

California’s event was tied to warm water, however, as researchers saw healthier sea stars in deeper waters, she added.

Keyser said wasting diseases have also occurred when sea stars overpopulate “but never to this extent.”

The epidemic is one of the largest marine disease events worldwide, Miner added. The survival rate is difficult to determine when there are also sea stars migrating and predators picking the animals off.

Linked to many sea star wasting cases, a warming ocean is hard to stop with man-made climate change and natural cycles like El Niños, Miner said.

“That’s the trickiest thing,” she noted, “whether we’ll be able to change our ways enough to make a difference.”

Warmer waters have affected other species, such as seabirds, impacting the entire ecosystem, Keyser said.

Some studies have suggested the disease is spread via human touch. Keyser said more research is needed before making any conclusions in Cannon Beach. Researchers sterilize their equipment and boats before going out. Miner suggested visitors and residents err on the side of caution when viewing sea stars.

She added that important information comes from the public. She encourages beachgoers to submit sightings of any sick sea stars to seastarwasting.org.

As is the case in other mysterious die-off events, researchers will have to find more answers before taking any action.