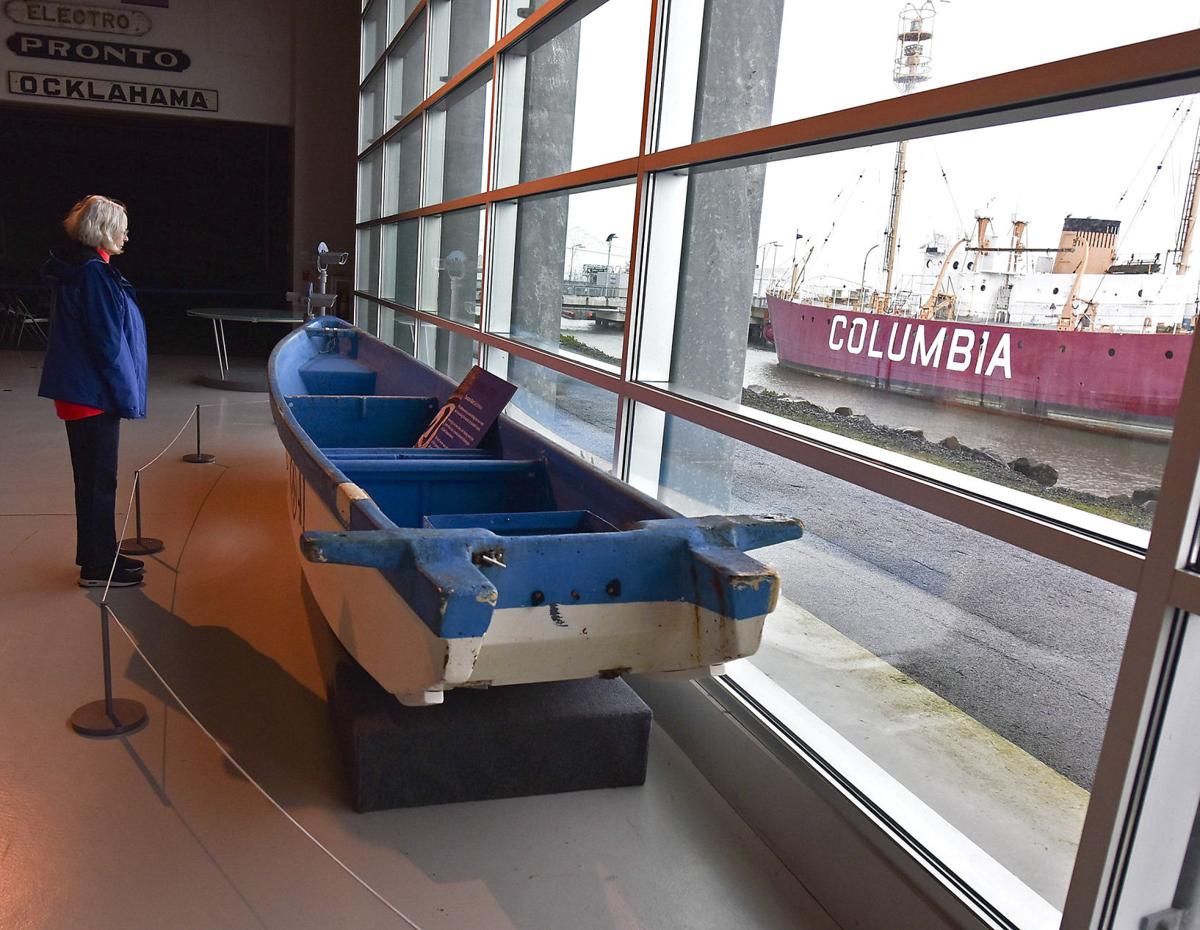 Carolyn Stock of Salem looks at a display at the Columbia River Maritime Museum in Astoria of a boat that washed ashore near Cape Disappointment as a result of the 2011 tsunami in Japan. 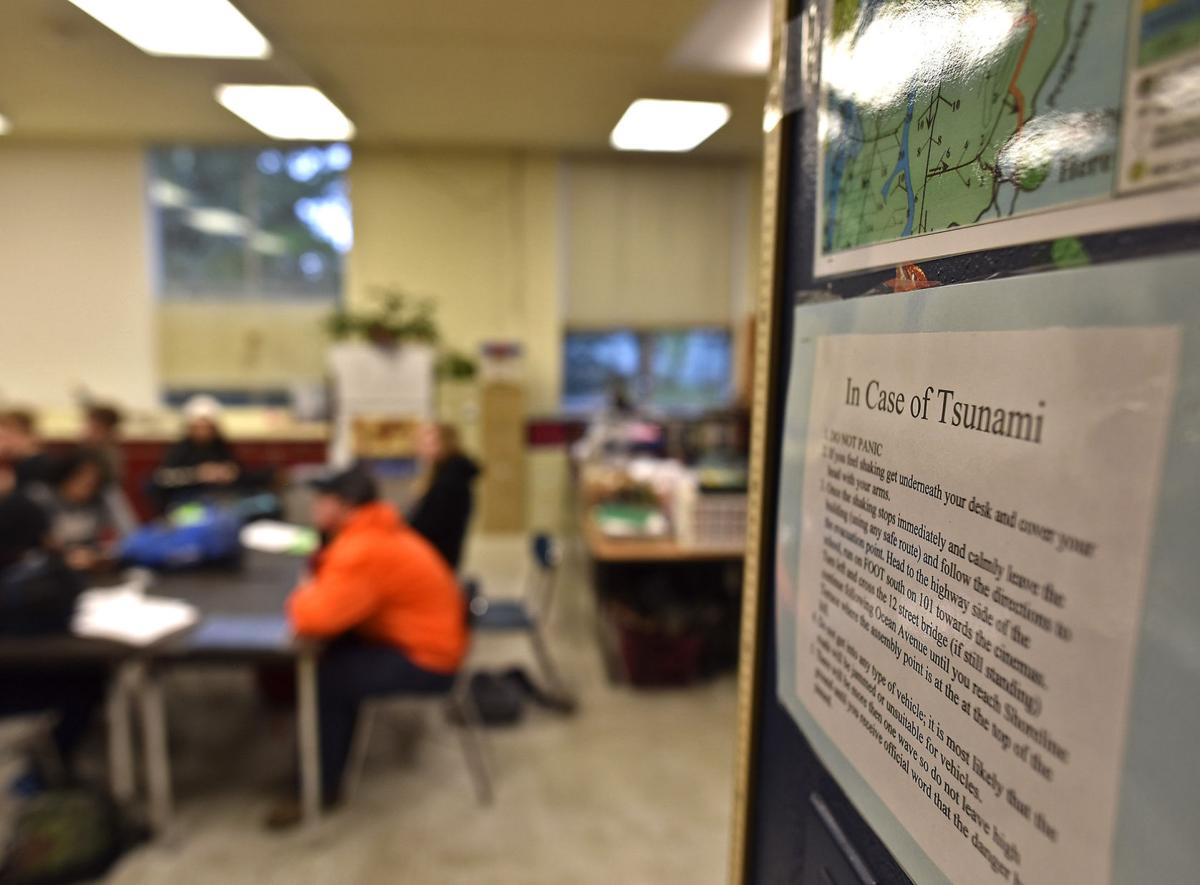 Students at Seaside High School are reminded every time they enter the classroom of the danger of tsunamis in a community that is in such close proximity to the beach. 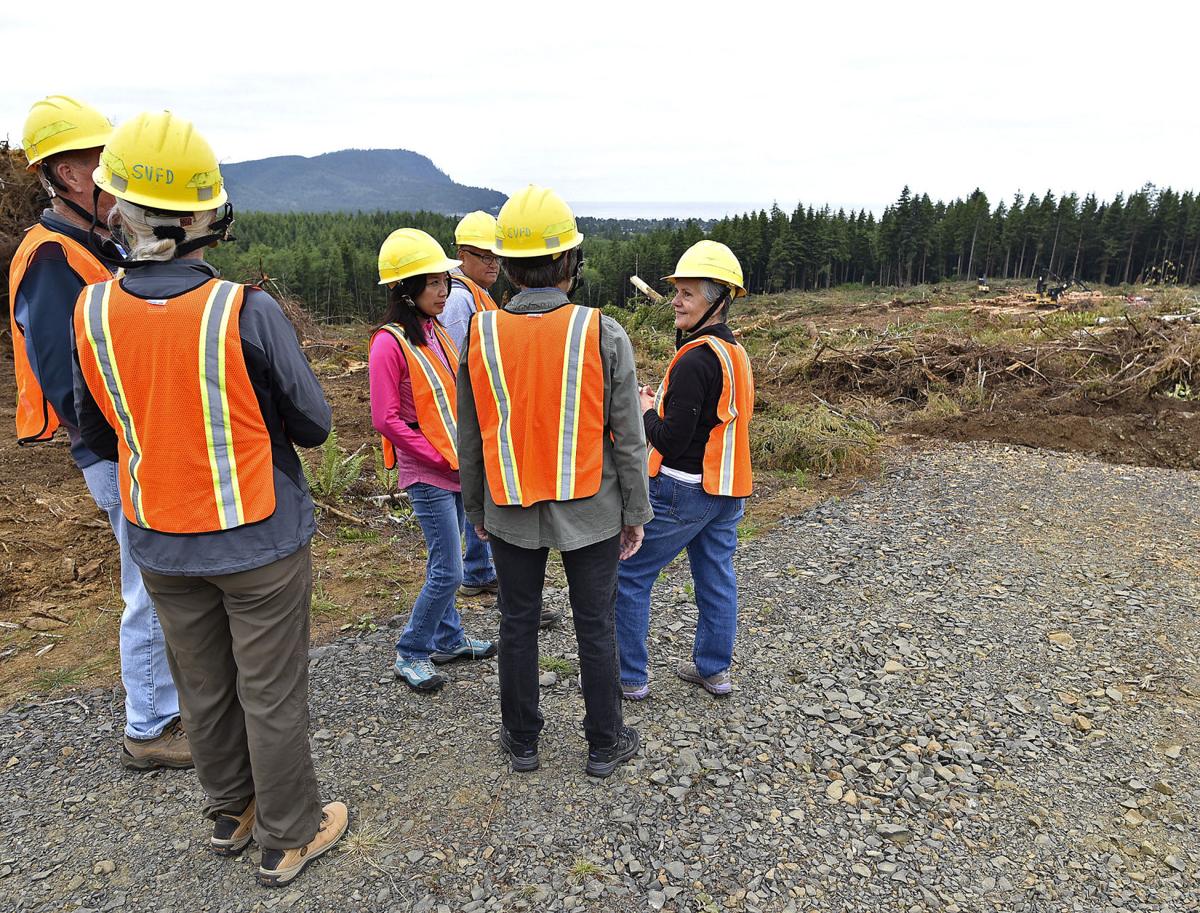 Seaside School District officials take a tour of the new site for three Seaside schools after a $99.7 million bond was passed last year to move them out of the tsunami inundation zone. 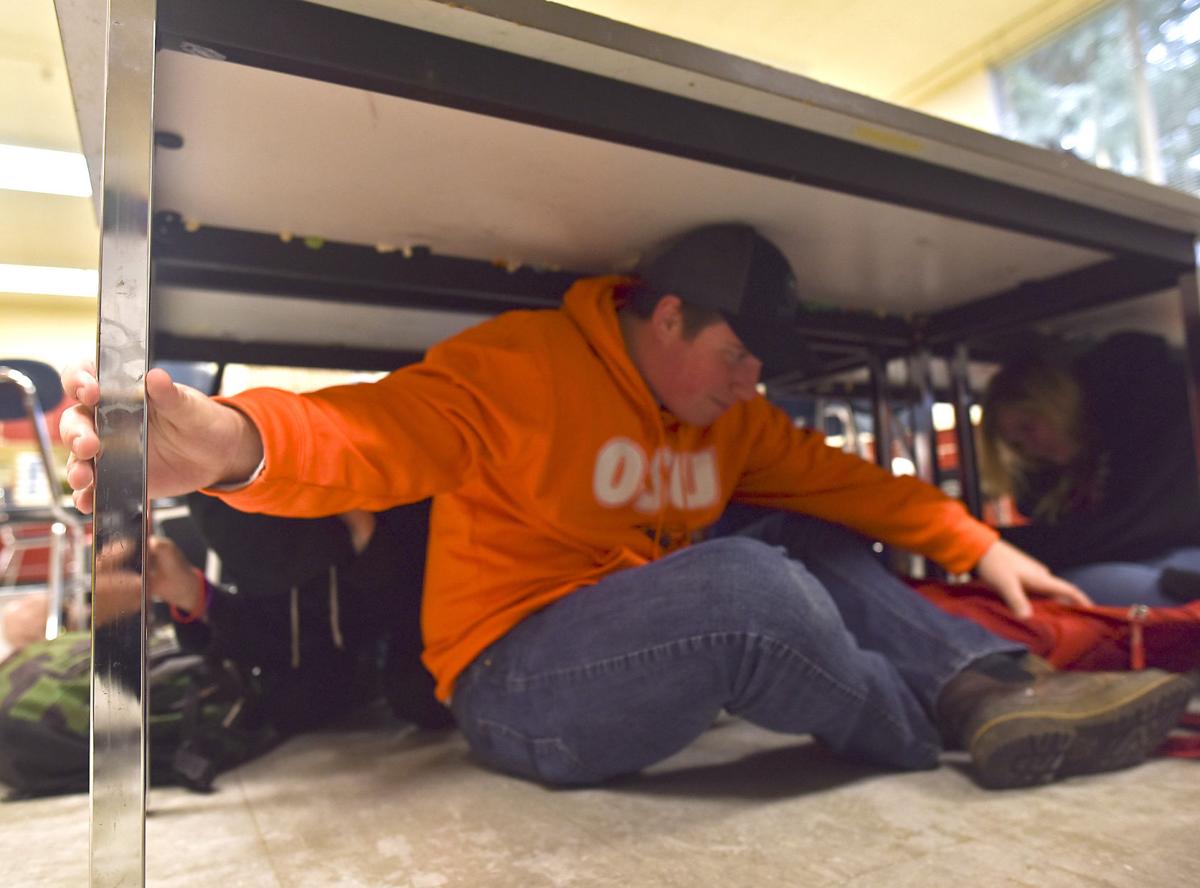 Students at Seaside High School practice an earthquake drill, which also typically includes an evacuation of the school to higher ground in case of a tsunami.

Carolyn Stock of Salem looks at a display at the Columbia River Maritime Museum in Astoria of a boat that washed ashore near Cape Disappointment as a result of the 2011 tsunami in Japan.

Students at Seaside High School are reminded every time they enter the classroom of the danger of tsunamis in a community that is in such close proximity to the beach.

Seaside School District officials take a tour of the new site for three Seaside schools after a $99.7 million bond was passed last year to move them out of the tsunami inundation zone.

Students at Seaside High School practice an earthquake drill, which also typically includes an evacuation of the school to higher ground in case of a tsunami.

This fall a child care center moved into a building in Astoria that Oregon State Police had left because it was in the tsunami inundation zone.

One day, an event that hasn’t happened since 1700 will shake much of the West Coast. The “Big One” — the Cascadia Subduction Zone earthquake and tsunami.

But the North Coast is already in motion. Large apartment complexes are going up, permits are in process. There’s more development on the way.

City officials in Astoria and Warrenton are working to answer questions about livability. What should the cities look like in 10 or 20 years? What needs to be preserved? What needs to be built? What are the best locations for certain types of businesses?

One question remains unanswered, Corcoran said: What does and doesn’t belong in the areas we know will be underwater?

When communities attempt to answer that question, it’s a “scattershot approach,” he said. “This (Cascadia event) is something that will happen to everybody, but until it does, nobody is in charge.”

Last year, 65 percent of voters in the Seaside School District approved a $99.7 million bond to move three Seaside schools out of the inundation zone.

In Astoria, the city is updating its emergency response plans, researching resources and equipment. The Oregon State Police opted to move from their Astoria office, out of the inundation zone, and into a new building when the opportunity arose. But then a child care center moved in.

Warrenton updated its evacuation maps, but the city’s Planning Commission approved developments in areas that will be underwater when the tsunami hits.

Meanwhile, in Hammond and Warrenton’s neighborhoods, Community Emergency Response Team volunteer Sylvia Stephens passes out blue plastic bags filled with pamphlets and maps to help people prepare for emergency situations. Much of the information is specific to tsunamis and earthquakes.

For many years, Cannon Beach has committed resources to planning for a Cascadia event and is looking at its sand dunes, asking how these natural features could protect the community but also create a space to use in the meantime.

Still, large grocery stores are already established in the inundation zone, as are schools, neighborhoods new and old, fire stations, police stations, all of Astoria and Warrenton’s pharmacies — with the exception of the pharmacy at Costco. All the liquor stores.

At a work session in October, Astoria City Councilor Bruce Jones said even looking into routine strategic planning or community visioning questions in Astoria right now is like “changing a tire on a moving car.”

“The (North Coast) community knows the tsunami and earthquake are a big hazard and a part of living here,” said Hannah Dankbar, a coastal planner with the Columbia River Estuary Study Taskforce.

But, she said, the tension is this: “The town is developed, so where are we going to move things?”

Astoria Fire Chief Ted Ames has suggested establishing a secondary fire station at the top of the hill. The two existing fire stations are located downtown, in the inundation zone.

Not only would a hilltop location shorten the department’s response time — volunteers who live on Astoria’s South Slope have to come downtown to board an engine and then drive back over the hill to fight a fire in their own neighborhood — it would move important resources onto stable ground.

All of these facilities are located in the inundation zone, a situation that is “not conducive to building disaster resilience for the city of Astoria.”

When the Shooting Stars Child Development Center announced it was moving to the building on Gateway Avenue, the same building Oregon State Police had left behind, some parents were concerned, said Denise Giliga, the center’s director.

When the president of the local longshore union chapter appealed the Astoria Planning Commission’s decision to let the center operate out of the building, he referenced the tsunami hazards.

Giliga had also considered them.

“It was one of the points that was steering me away (from the Gateway building) at the beginning,” she said.

But of the few options in front of her, the Gateway building remained the best. And the parents who were concerned about the new location? “They realize this is where we live, and this is almost every area,” Giliga said.

She and her staff have established several evacuation plans and evacuation sites for the Gateway building. They have emergency cribs equipped with monster wheels. Every month, they hold fire and other emergency drills. They can quickly communicate with parents through FlashAlerts for events as benign as snow days and as serious as an earthquake or tsunami evacuation.

They have teamed up with neighboring businesses to provide nearby evacuation sites in the case of a large fire. Another evacuation site is at a park on Alameda Avenue, in the shadow of the Astoria Bridge.

“But I hate that idea in an earthquake,” Giliga said.

They are actively looking for another site.

The next Cascadia event will affect every community differently. In Seaside, tsunami waves carry real menace, and they will destroy parts of Warrenton. In Astoria, the earthquake will do the most damage.

To Corcoran and others involved in tsunami preparations, there are small changes that could be made now.

He suggests an inventory of buildings in downtown Astoria so people renting a space know the structure, what is likely to hold up and what might be problematic. There are small fixes like replacing glass skylights with plastic bubble windows so falling glass doesn’t injure someone below.

“We will learn to thrive here in Cascadia, I am confident,” Corcoran said. “But the next Big One is going to be our big learning curve.”