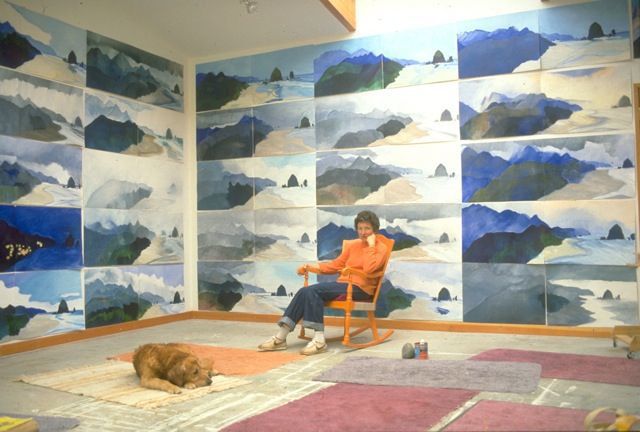 SUBMITTED PHOTO A 1981 photo featuring Shirley Gittelsohn with many Haystacks. 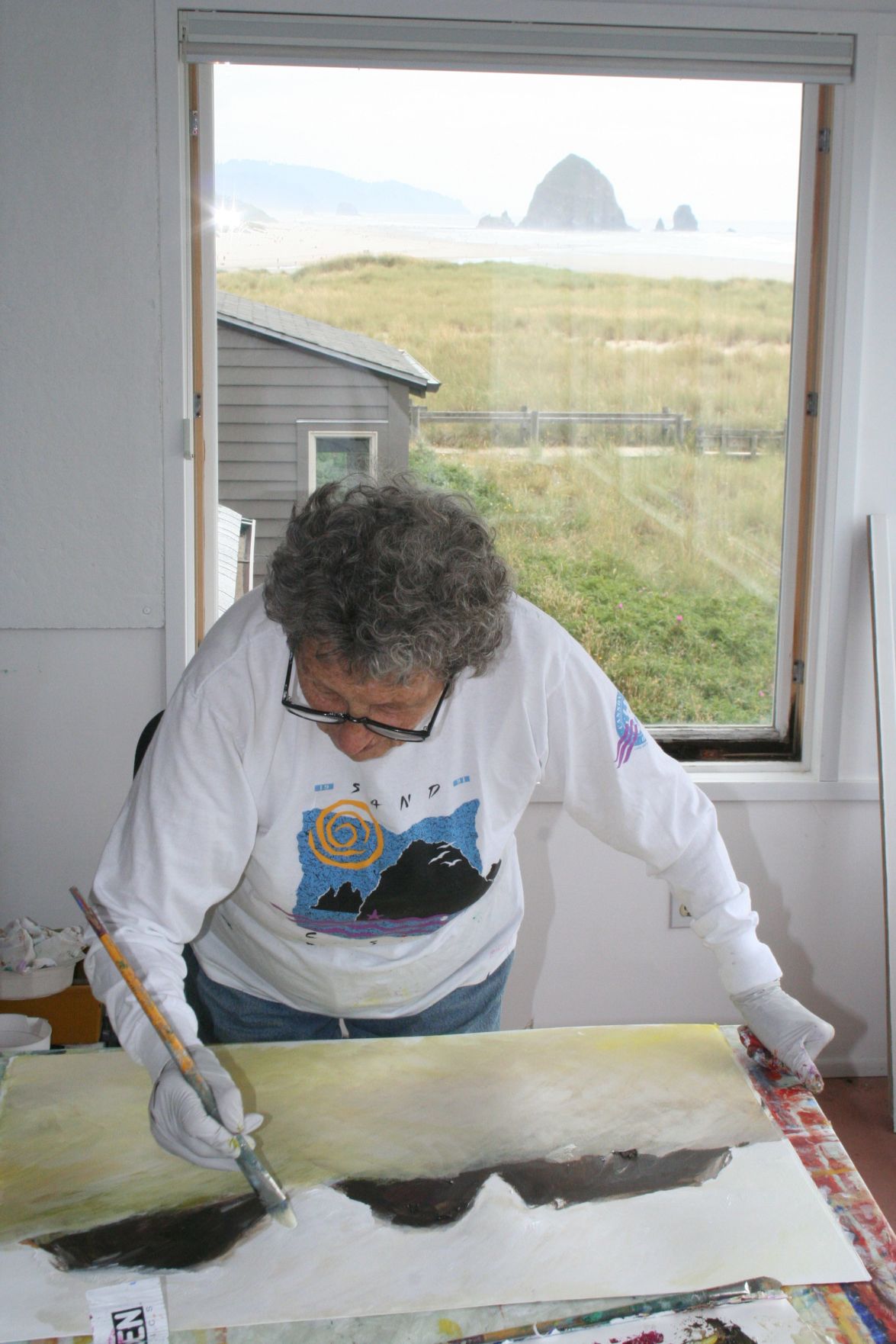 SUBMITTED PHOTO The color picture was taken in 2013 during the filming of a documentary for OPB's Oregon Art Beat. 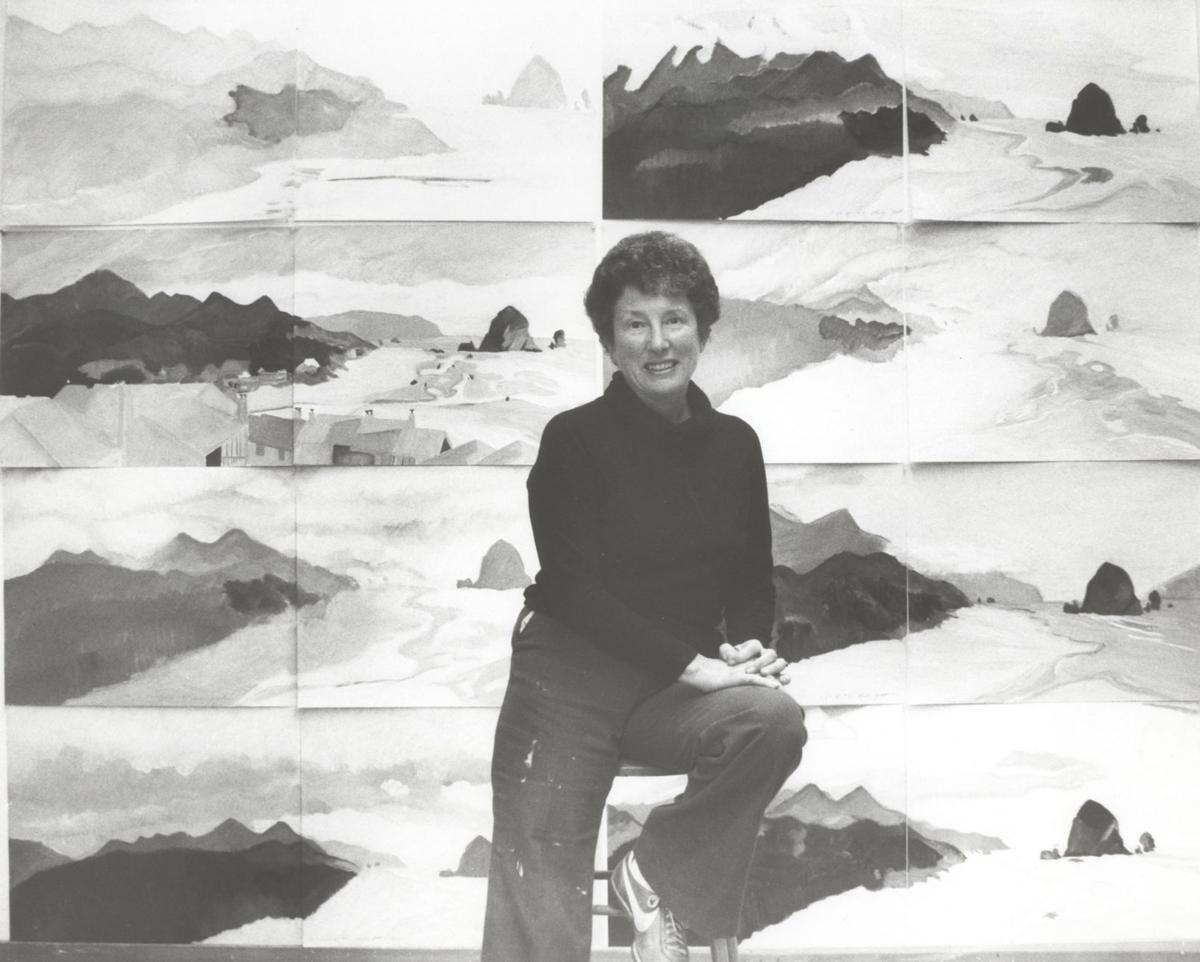 PHOTO JOHN GITTELSON The black-and-white photo of Shirley with her 1981 series of Haystack Rock, which she rushed to paint before construction of the Breakers Point condos blocked the view from the house her parents bought in 1944.

SUBMITTED PHOTO A 1981 photo featuring Shirley Gittelsohn with many Haystacks.

SUBMITTED PHOTO The color picture was taken in 2013 during the filming of a documentary for OPB's Oregon Art Beat.

PHOTO JOHN GITTELSON The black-and-white photo of Shirley with her 1981 series of Haystack Rock, which she rushed to paint before construction of the Breakers Point condos blocked the view from the house her parents bought in 1944.

Shirley Georges Gittelsohn, a painter who made Cannon Beach her second home and an obsessive focus of her art, died June 12 at age 90.

Gittelsohn had been painting in Oregon for more than five decades. She was famous for her Works Progress Administration-inspired landscapes, and her portraits are noted for their color, energy and connection to people and places in Oregon.

Her son, John Gittelsohn, described her work: “She was a colorist whose canvases burst exuberantly with the cobalt blue of the Pacific, the purples and forest greens of the Coast Range, the lavender-hued hydrangeas and white roses of her garden.”

Others throughout the community recognized Gittelsohn and her extraordinary talent. “Shirley was a wonderful artist. It was very inspiring to listen to her talk about her work and life amongst her paintings,” said former Cannon Beach Gallery Director Andrea Mace. “She will most certainly be missed in this coastal enclave of Cannon Beach.”

Shirley Gittelsohn was born in Portland but began summering on the coast in her infancy.

“I was born in Good Samaritan Hospital,” she said in an interview last month. “They took me home, and then three months later they took me down to the beach. And that was sort of the story of my life.”

Her parents, Tom and Daisy Georges, decided to rent a home in sleepy Cannon Beach when she was a teenager, Gittelsohn said, because in Seaside she spent too much time chasing boys.

The family bought a hilltop house north of Elk Creek in 1944 with an ocean-facing view that swept from Chapman Point to Cape Falcon, a vista she painted in rain, shine and fog from the 1950s, when she first took up a brush. “I liked being a mother and wife and so on, but I wanted something else to do, too,” she told the Gazette’s Erick Bengel in an April profile. “So I started painting and found I enjoyed it very much.”

“Cannon Beach was for Mom what Giverny was for Monet,” John Gittelsohn said Monday. “It’s a vast garden of shifting light and thick, salty air that inspired her unique vision.”

Gittelsohn was to continue painting until macular degeneration deprived her of her long-distance vision. She loved to walk on the beach south of Ecola State Park until she was 89.

In 1981, she feared that a proposed housing development would block her view of Haystack Rock. So, between March and July of that year, she cranked out 183 paintings of the rock, to “catch the view before it was gone,” she said. These were displayed at Cannon Beach City Hall.

In 1987, she and her husband, Bill, built a new house with a top-floor studio that recaptured the view blocked by the condos. In 2009, a retrospective of Gittelsohn’s career was presented at the Vollum Gallery at Reed College. Also in 2009, she wrote and published a book, “Paintings and Reflections.”

In 2013, a crew for Oregon Pubic Broadcasting’s Oregon Art Beat filmed Gittelsohn and her family reminiscing about the beach and its role in her development as an artist.

During her nearly 60-year career as an artist, Gittelsohn also painted still life scenes from her vacations in Mexico and many, many portraits of her children. Her work has been displayed at Reed College, Willamette University, the Oregon Jewish Museum and Arlene Schnitzer’s Fountain Gallery.

This year, her exhibition at the Cannon Beach Gallery, which ran through June 2, included about 15 oil paintings, most of which she painted during the 1970s and 80s. They depict the stretch of beach from Chapman Point to Haystack Rock as she viewed it from her beach house window.

“I’ve been going through various pieces and just reseeing them again and just enjoying them very much for the most part,” she said before the exhibition’s opening. “I just hope the gallery’s big enough for all this stuff!”

The exhibit was dominated by a 1977 family portrait of her three children — Dena, John and Judy — her late husband, Bill Gittelsohn, and the family cat and dog, posed on the dunes where the Breakers Point condominium project now stands. When the condo project was approved in the 1981, she rushed to paint dozens of versions of Haystack Rock before the view from her home disappeared. The paintings were exhibited in Cannon Beach City Hall later that year.

Currently, her paintings hang in Cannon Beach City Hall and the Cannon Beach Library. Others are on sale at the White Bird Gallery, which was founded by her late sister-in-law, Evelyn Georges.

Asked what tradition she paints in, Gittelsohn said in April: “My own.”