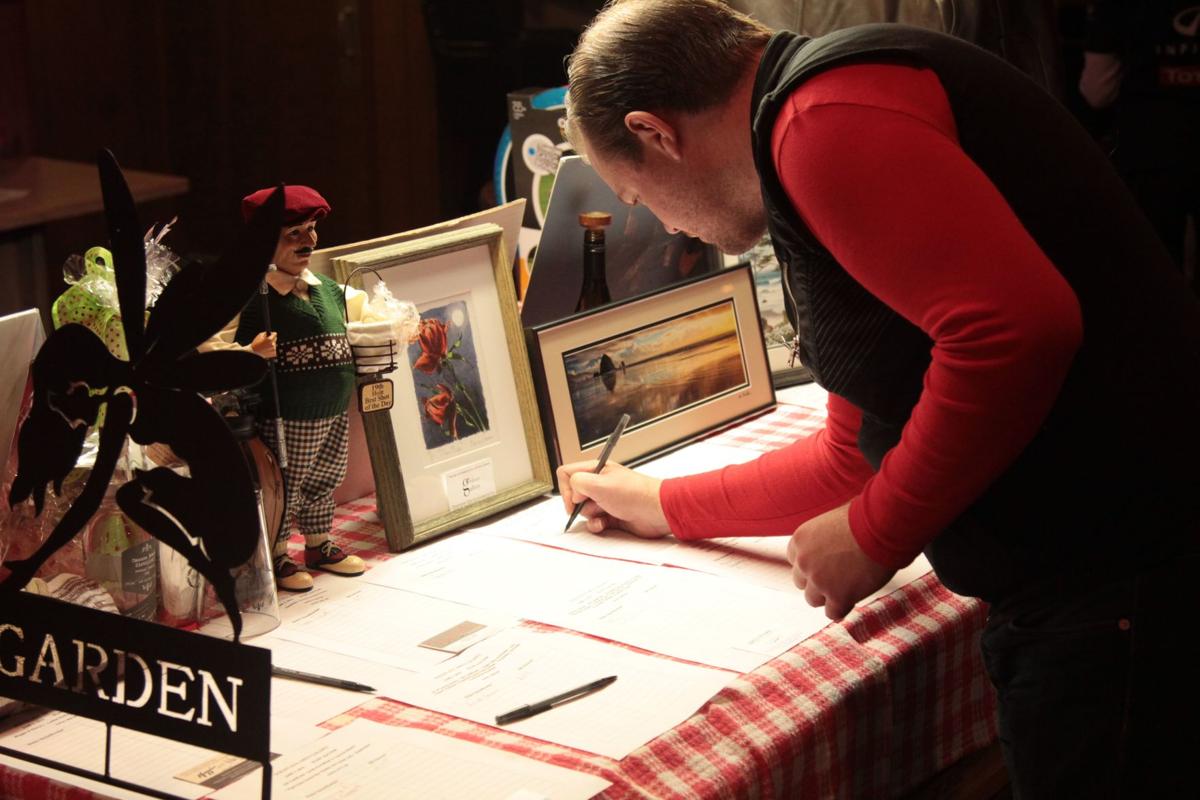 ANDREW TONRY PHOTO A bid is placed at the silent auction. 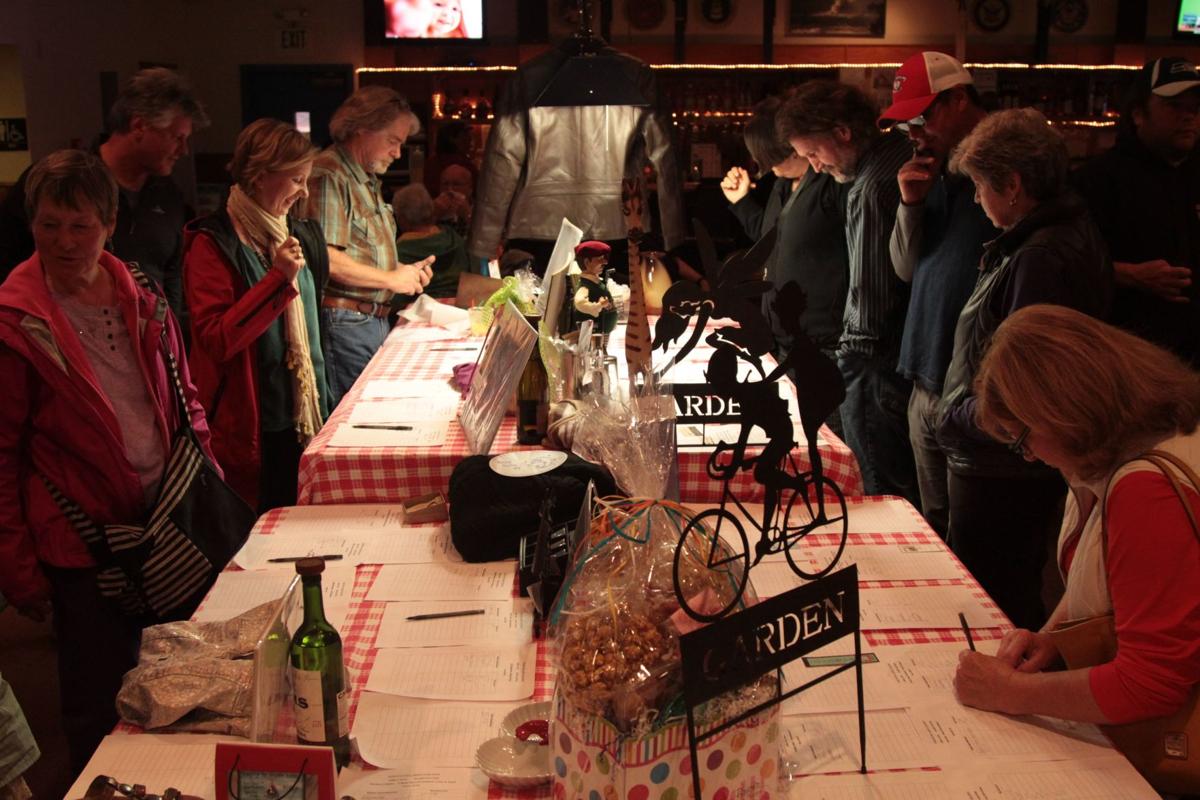 ANDREW TONRY PHOTO The silent auction at the American Legion. 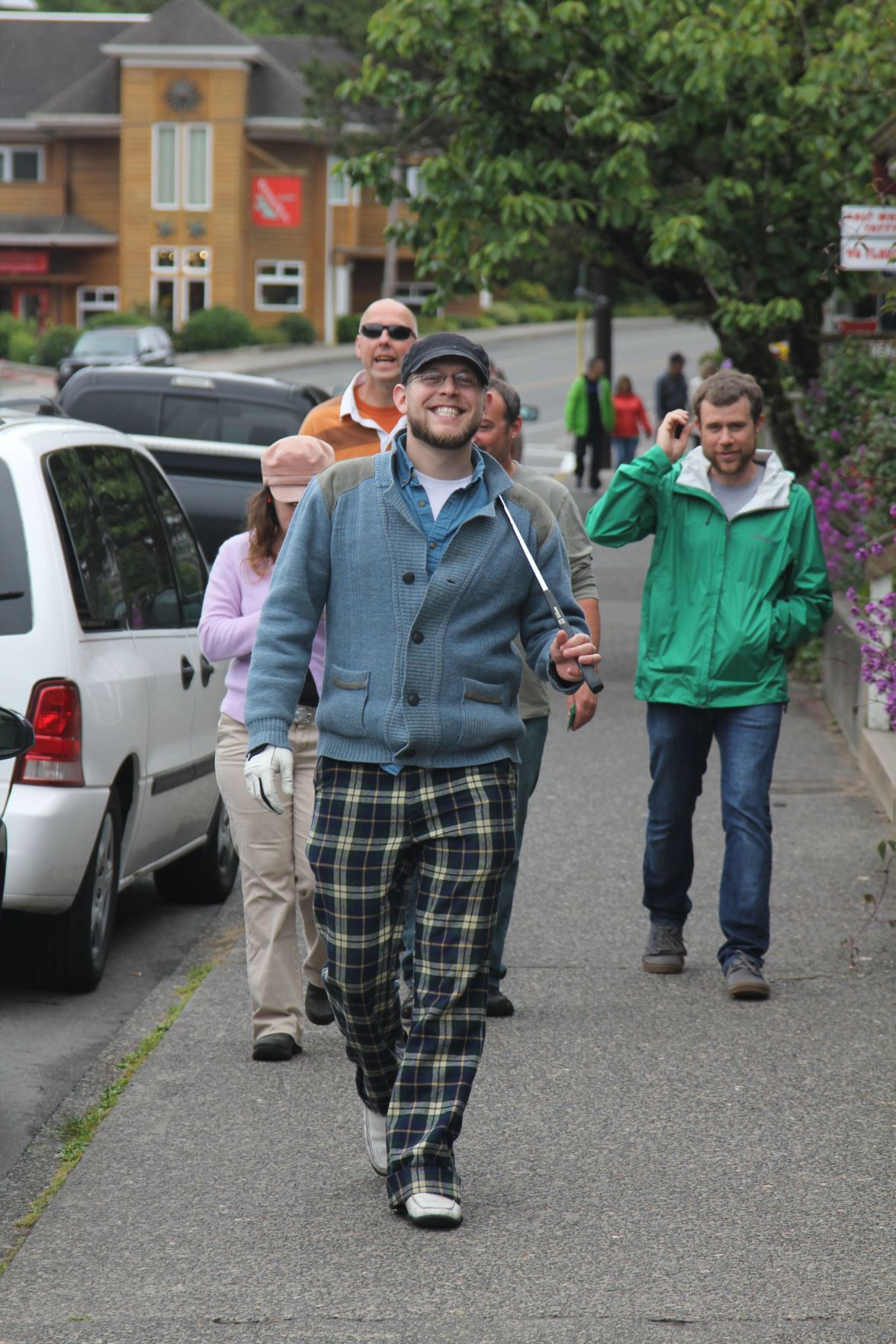 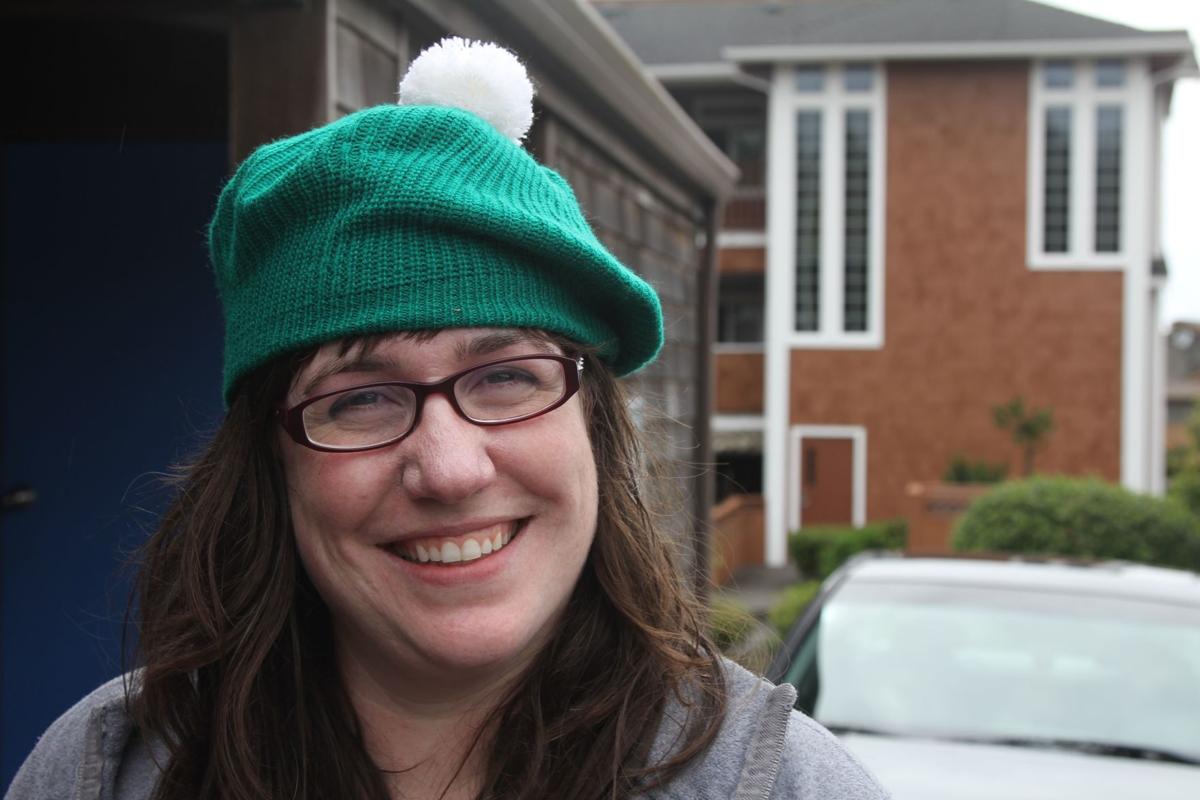 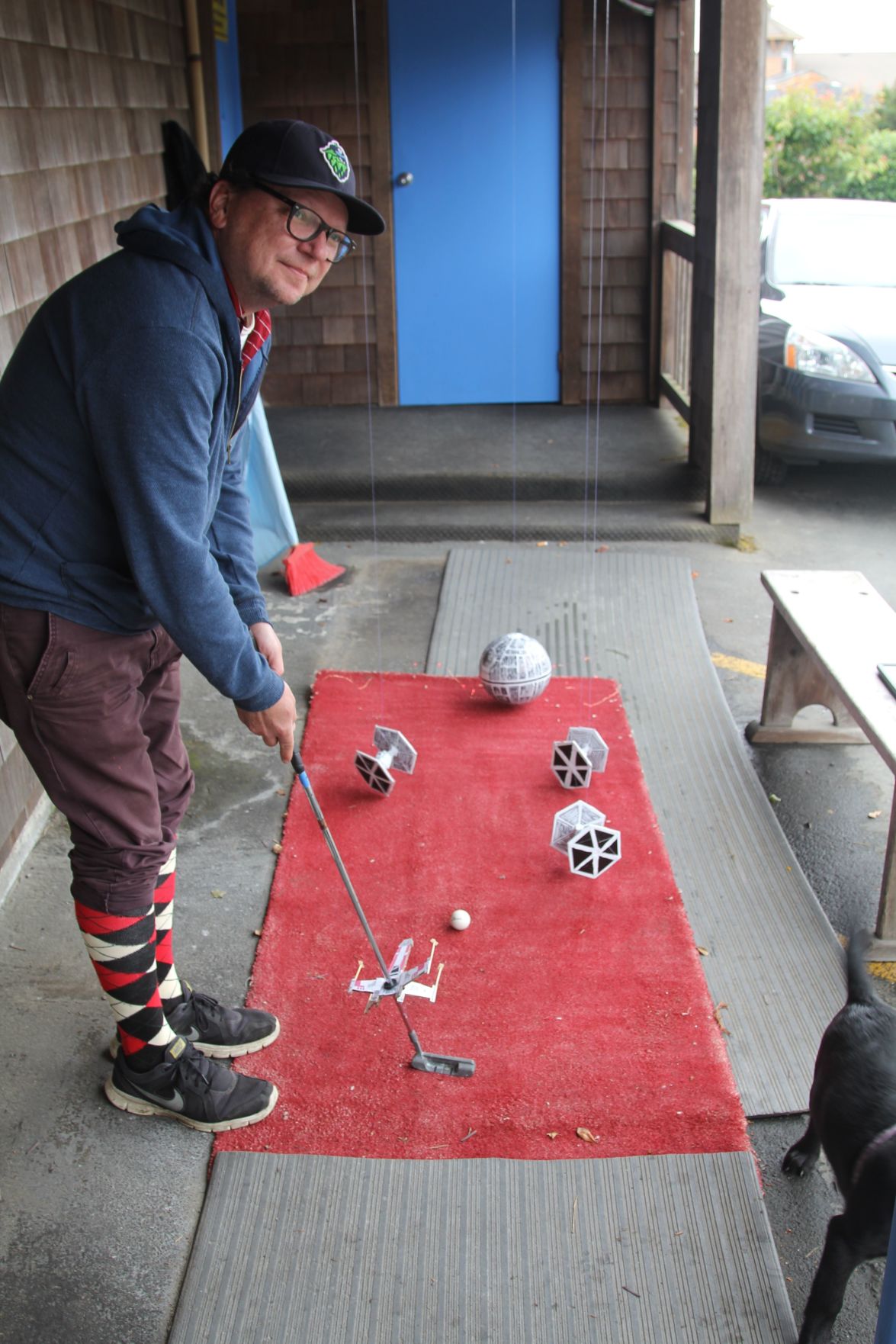 ANDREW TONRY PHOTO Dave Butler, who had the best score on the day, takes aim at the Star Wars shooting gallery on hole #12.

ANDREW TONRY PHOTO A bid is placed at the silent auction.

ANDREW TONRY PHOTO The silent auction at the American Legion.

ANDREW TONRY PHOTO Dave Butler, who had the best score on the day, takes aim at the Star Wars shooting gallery on hole #12.

In the midst of a wet, gray week, the clouds smiled upon the Tolovana Arts Colony. Rain stopped almost the moment that the ninth annual Cannon Beach Puttz mini-golf fundraiser teed off.

“I was really surprised,” said Lisa Kerr, an event coordinator at the Arts Colony. “I actually expected a lot less people because it was raining in the morning and it was kind of gloomy out, and it just didn’t seem like golf-party weather. But people turned out!”

Tuesday, June 2, nearly 40 golfers played the 12 holes scattered throughout Cannon Beach. Each hole was sponsored, designed and operated by a local business, who donated $100 apiece for the privilege. After the 12th hole, a Star Wars-themed shooting gallery, many players, some of them quite nattily dressed, retired to the American Legion for libations, tacos, and to press their luck in a raffle and silent auction.

“This is the biggest fundraiser of the year for the Tolovana Arts Colony,” said Evie Alburas, the non-profit group’s secretary. “It has been since its inception.”

The silent auction featured contributions from across Cannon Beach, from galleries to the restaurants, hotels and beyond. The offerings ranged from artwork to boutique gift certificates, hotel stays, clothing, candy and so on.

The most bandied about item in the auction was a painting by the recently deceased, and dearly beloved, Steve McCleod. After a fierce, back-and-forth bidding war, the piece, a bold seascape affixed to a corrugated cardboard box, topped the auction roles at a price of $415. The donation, this time posthumously, was one of many McCleod made to the Arts Colony.

As the winners of the raffle and auction were announced, so too were the winners — and losers — of the mini-golf tournament. Affectionately known as “Butz,” Dave Butler had the best round of the day. He shot a 27. “It’s my first win,” Butler said. “I’ve been second and third several times.”

It’s been a long time coming for Butler, who has not only participated in the event since its inception, but helped shape it. Tolovana Arts Colony founders Billy Hults and Michael Burgess originally envisioned a proper golf tournament. They shared the idea with Butler, a regular on the links.

“I took one look at them and said, ‘No, you guys can’t play golf,’” Butler said with a laugh. “And so we developed this.”

Needing 59 shots to complete the course, the ignominy of Worst Golfer went to Secretary Alburas.The award for Favorite Hole, based on votes from the players, went to Voyages Toys. The approach included shooting a target with a toy bow and arrow that would trigger the golf ball to drop on the green. If the player was unable to hit the target with four shots from the bow and arrow they would get one more chance, this time throwing a rubber shark.

“It’s an honor and a privilege,” said Voyage Toys owner Jacob Bond of the distinction.

Though perhaps not so multi-faceted, challenge and creativity abounded on the many holes. Cannon Beach Distillery’s Mike Selberg concocted a steep ramp that required the ball to go airborne before finding one of the many holes. Those who hit bottles of his craft spirits were offered a free taste.

The Coaster Theater’s entry, with a bevy of props from the upcoming production of “Little Shop of Horrors,” was among the finest.

A collaboration between Jupiter’s Books and White Bird Gallery, located in the courtyard, was the only hole featuring real grass. Normally closed on Tuesdays, Jupiter’s Owner (and Tolovana Arts Colony board member) Watt Childress opened the store and brought his lawn mower.

“I cut the grass in three directions,” Childress said with a laugh. “It’s my little attempt at green management.”

What hole was the most difficult depends on the golfer. But according to Butler, who on the day was the most accomplished, it was Bill’s Tavern--even if it didn’t manage to trip him up.

“I hit my first shot in for a hole-in-one,” Butler said. “That was a very hard hole.” But the competition was friendly. “It’s all about the Tolovana Arts Colony,” he added.

And to that end, Puttz was a success.

“It would be a lot harder to pay our bills without it,” Alburas said. “A lot. We’re going to be paying our insurance. We have all kinds of bills.”

And though Alburas lamented the gray, albeit dry, skies, remembering that last year’s pristine weather brought out 10 more participants, it’s hard to imagine rain would’ve deterred the all-local band of golfers who came to play and show their support.

“It’s very special,” Butler said of Puttz. “Plus it gives a lot of the locals a chance to relax and have fun just before we get really busy this summer.”

“We really love the tourists,” he added. “We enjoy them. But sometimes its nice to have fun by ourselves.”