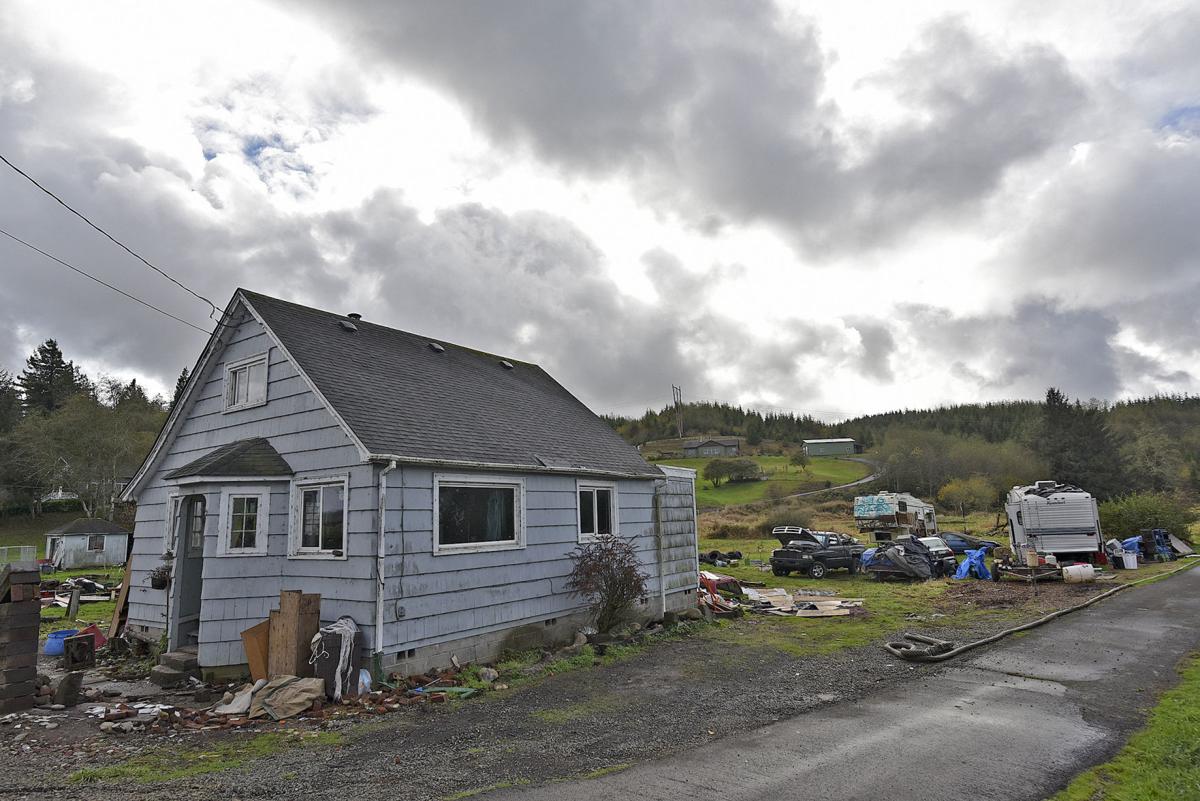 A property off Youngs River Road south of Miles Crossing has been deemed a problem by neighbors. 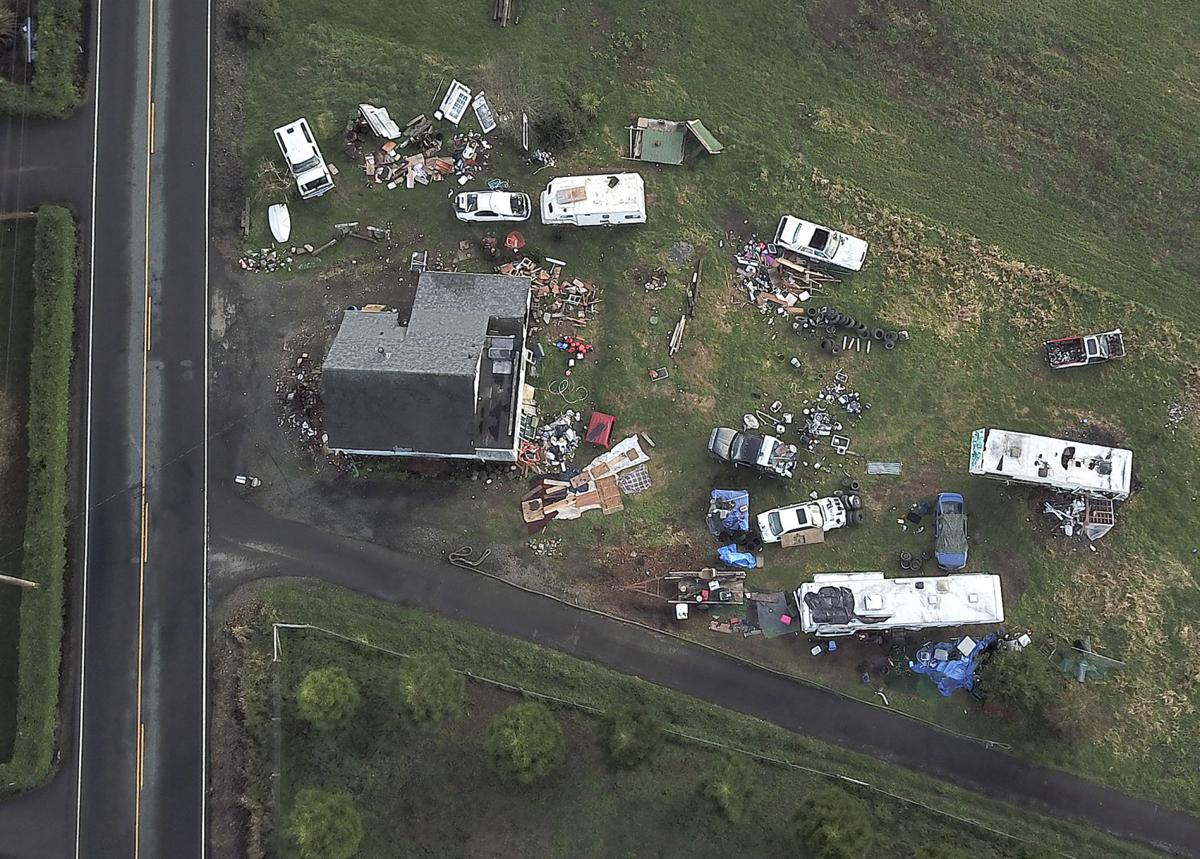 Vehicles and trailers in states of disrepair and piles of refuse can be seen around the property. 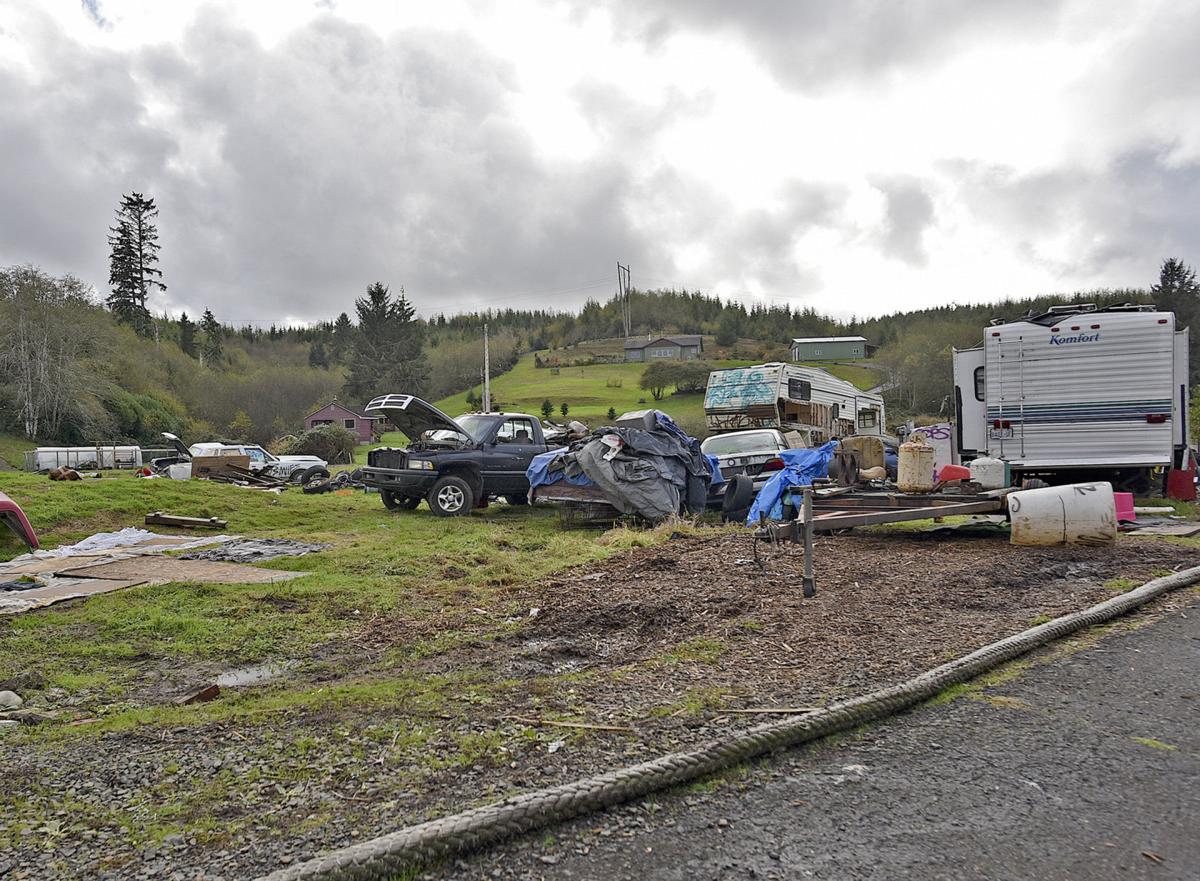 Neighbors around the property say the site has been the source of conflict in recent months.

A property off Youngs River Road south of Miles Crossing has been deemed a problem by neighbors.

Vehicles and trailers in states of disrepair and piles of refuse can be seen around the property.

Neighbors around the property say the site has been the source of conflict in recent months.

A scenic 20-acre property on Youngs River Road that Leslee and John Thompson moved to in 2016 was perfect. At 61 years old and retired, they are now closer to their grandchildren, and their three horses have room to roam.

“This is the dream that I worked 38 years for,” said Leslee Thompson, a retired nurse.

The only problem: the grandchildren don’t visit, and the horses can barely roam.

Soon after they moved in, a host of people in recreational vehicles started gathering at a property near the entry to their 200-foot-long, sloped driveway. The Thompsons say they’ve dealt with daily problems, including threats of violence, possible drug odors, loud noise, piles of trash, human waste and burning of large items like a trailer and mattress.

They listed a range of health and safety concerns.

“I feel pretty much like I’m living in a war zone,” Leslee Thompson said. “That’s not what I moved here for. That’s not why I pay my taxes.”

At least 20 similar problem properties are known to exist in rural areas of Clatsop County. The county is managing about 200 unresolved code violations and, until recently, did not have a full-time code compliance specialist.

When a property does rack up violations, the consequences can take years, if ever, to take hold.

“Why are they being allowed to continue to get away with this without consequences?” Leslee Thompson said of the squatters next door. “Nothing that (the county has) done so far has been effective.”

“We have a process established in the code, and it’s slow,” she said. “Just as we wouldn’t want anybody coming in and taking action against us for a real or perceived violation, we’d want to, you know, have our day in court, so to speak.”

After visiting a property to verify a complaint, the county sends a letter of warning to the owner, offering 15 days to remedy the situation or present a plan. If no response is received, a formal notice of violation is sent, allowing 30 days to answer. Then the county places an order on the property allowing it to collect up to $20,000 in fines in a 10-year period if issues remain unresolved.

Henrikson can recite the Youngs River Road address by heart. The property has several code violations — accumulation of solid waste and trash, people living in recreational vehicles in one spot beyond the legal time limit, no electricity, no working septic pump and burning plastics, she said.

“I want every trailer out of there that’s not in compliance,” Leslee Thompson said. “The only thing these people will understand is, when that trailer is hauled off down the road, they need to find a new place to live.”

The predicament was highlighted by a recent first-of-its-kind hearing held by the county commission.

A property on G Road in Jeffers Garden that had been foreclosed due to unpaid taxes had similar issues as the one on Youngs River Road, which has not been foreclosed. The property owners originally had two years under state law to either pay the taxes or vacate the land.

But following the court-style hearing, commissioners voted to take possession of the property a year ahead of schedule, ruling that it was decreasing in value.

Chief Deputy Paul Williams of the Clatsop County Sheriff’s Office applauded the decision but added that he hopes the land use code could add more teeth to prevent similar situations in the future. The current process does little to deter people from violating, he said.

“That’s something way down the road that, at the end of the day, the person doesn’t feel consequences for it,” Williams said. “Something that quickens the process to put it in front of the county would be an improvement.”

The Thompsons suspect a number of the former residents at the G Road property moved next door.

“Some of those floated over here,” John Thompson said. “It’s not the best of citizens of Oregon.”

As time goes on, the squatters have grown bolder, the couple said.

Sheriff’s deputies typically note which properties cause disturbances and keep a more focused eye on them during patrols. But they can’t arrest someone unless they find probable cause, and those who are arrested sometimes return quickly due to overcrowding at the county jail.

The Thompsons’ granddaughter, 8, no longer wants to visit them after witnessing a confrontation between John Thompson and the squatters.

Upset at their constant use of the driveway, the couple posted a “No Trespassing” sign, but it was quickly destroyed, the couple said. Annoyed at the Thompsons for their complaints, the people next door once placed hidden nails on their driveway.

One man even told John Thompson that he may be shot someday, he said.

“That, for me, changed everything,” said Leslee Thompson, adding she considers keeping a loaded weapon by her bed every night.

Recently, one of the squatters’ dogs chased the Thompsons’ horses. The dog was not responding to verbal commands, and Leslee Thompson considered grabbing a rifle out of fear that the horses would run into the street and cause damage or injury. Before that happened, though, the dog returned to its owner.

“Something bad is going to happen,” John Thompson said.

A 2012 update to the code, for instance, included a quirk that transferred the power to enforce noise complaints from the sheriff’s office to the county Community Development Department. Henrikson said it would make sense to transfer that back.

“They’re doing what they can with the power that they have,” Williams said.

A recent hire will likely give the department more power moving forward.

The department, which has experienced significant turnover recently, had been missing a code compliance specialist for a couple of years. As a result, other tasks were prioritized.

“As the economy picked up here and the development picked up, code enforcement really fell to the wayside,” Henrikson said.

But after a lengthy search, Nancy Mendoza was hired to fill the position. Mendoza was an environmental health specialist with the county Public Health Department and had experience with inspections and field work.

She began full-time in October and was handed a list of the county’s top 20 problem properties.

“Instead of just letters being sent out, we will have a member of the county that goes door to door and speaks with the property owner,” Mendoza said.

The Youngs River Road property owner, whose son allegedly allowed people to camp there, filed an eviction complaint against the squatters in Circuit Court last week, according to court documents. While it has come at a snail’s pace so far, the owner promised to clean up the property after receiving two letters from the county in October.

In her most recent check-in at the Youngs River Road property this week, Mendoza noticed an improvement.

“They’ve kind of established this Monday ritual where they go out and see what’s happened over the weekend and if everything’s changed,” Henrikson said.

The Thompsons, meanwhile, are watching from just up the hill. They’ve considered leaving their dream home but are clinging to hope.

“All we know is we’re still living it. All they’re telling us is ‘It’s slow,’” John Thompson said. “Once the trailers are gone, they’re gone, and life can go back to normal.”