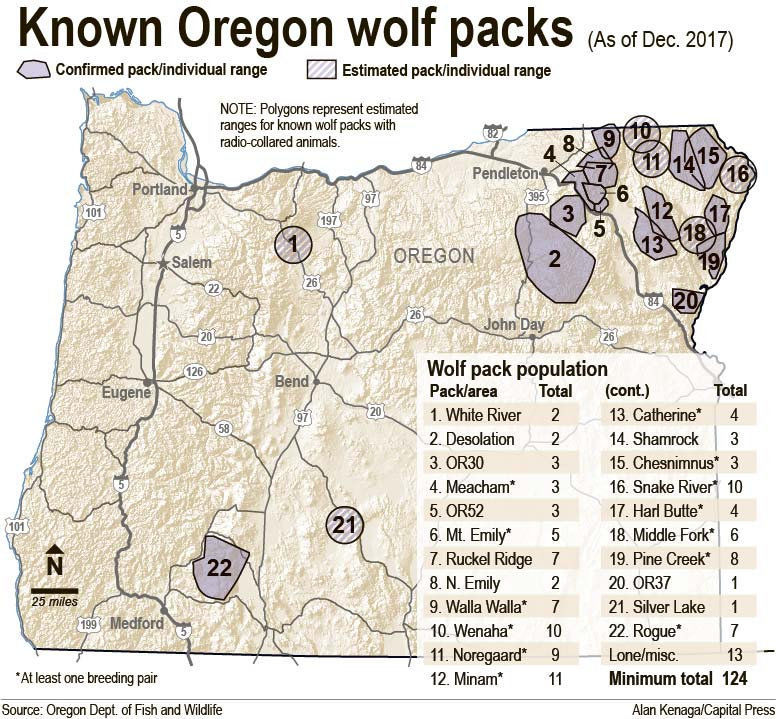 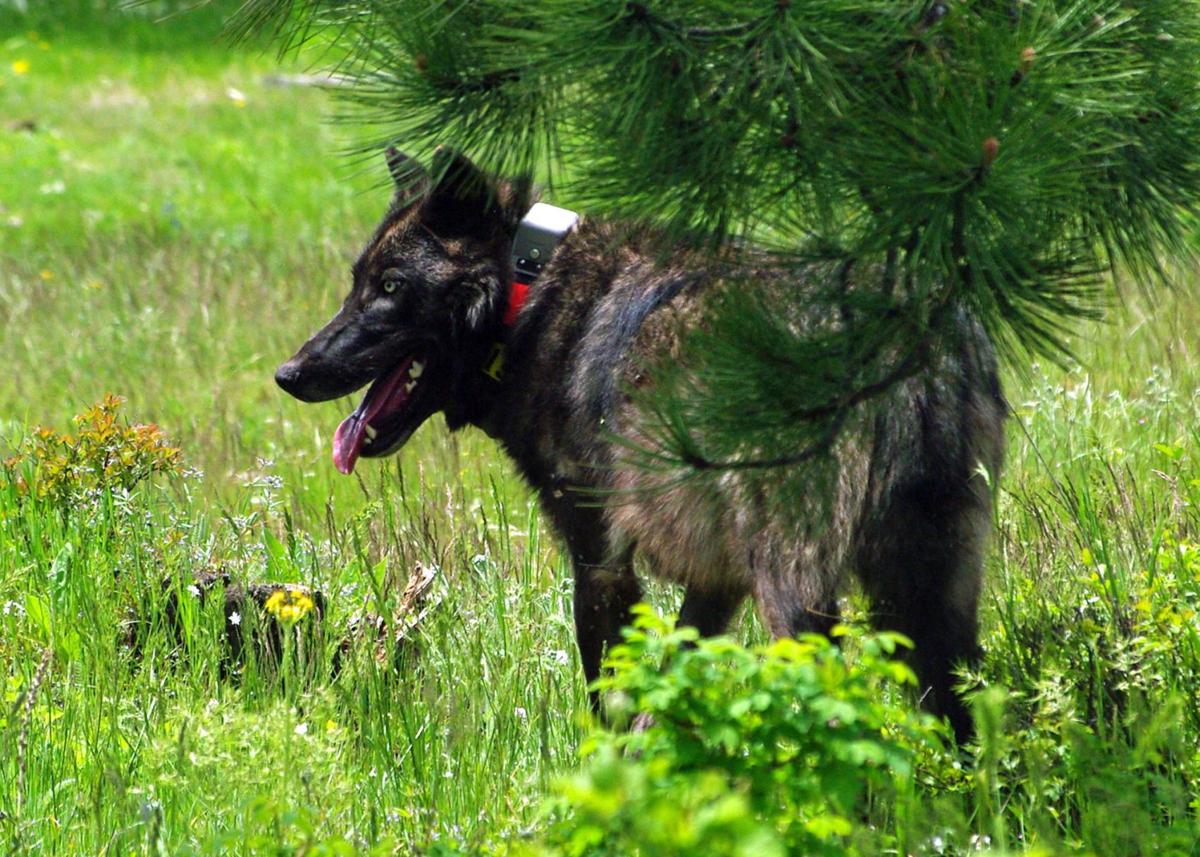 OR-26, a 100-pound adult male, after he was fitted with a GPS tracking collar outside La Grande.

OR-26, a 100-pound adult male, after he was fitted with a GPS tracking collar outside La Grande.

Oregon wildlife officials counted at least 124 wolves at the end of 2017, an 11 percent increase over the year end total for 2016, according to the latest annual report released Thursday.

The survey, which is conducted by the Oregon Department of Fish and Wildlife, is not a true population estimate but documents the minimum number of wolves across the state based on verified evidence such as visual sightings, tracks and photographs.

The department will present an overview of the findings at the next Fish and Wildlife Commission meeting April 20 in Astoria.

“The wolf population continues to grow and expand its range in Oregon,” said Roblyn Brown, the state wolf program coordinator. “This year, we also documented resident wolves in the northern part of Oregon’s Cascade Mountains for the first time.”

Most wolves in Oregon remain clustered around the northeast corner of the state, though several packs and known wolf territory can also be found in Wasco, Klamath and Lake counties. Statewide, Oregon now has 12 wolf packs, 11 of which were successful breeding pairs, meaning that at least two adults and two pups survived to the end of the year.

Wolf reproduction was the highest recorded in 2017 since the species returned to Oregon, with pups being born in 18 groups — a 50 percent increase over 2016. Though they did not meet the definition of a breeding pair, reproduction was confirmed in the Chesnimnus, Harl Butte, Meacham, North Emily and Shamrock packs, as well as the OR-30 and OR-52 pairs.

Gov. Kate Brown said she is encouraged by the continued recovery of Oregon wolves, though ongoing conflicts with poachers and livestock remain troublesome.

“Despite this good news, ongoing issues of poaching and livestock depredation must be carefully considered as we explore more effective management and conservation practices,” Brown said.

Though the Department of Fish and Wildlife removed wolves from the state endangered species list in 2015, it remains illegal to shoot a wolf except in limited circumstances, such as in defense of human life or those caught in the act of chasing livestock. Wolves remain federally protected west of highways 395, 78 and 95.

The state reported four cases of wolves killed illegally in 2017. Three cases are still under investigation. The fourth, in Union County, involved a wildlife trapper who shot a wolf he found in one of his traps. David Sanders Jr., 58, pleaded guilty to one count of using unbranded traps, and was sentenced to 24 months bench probation, 100 hours of community service and a $7,500 fine.

The Union County District Attorney’s Office agreed to dismiss one count of illegally shooting a special status game mammal, though Sanders did have his hunting and trapping license suspended for 36 months and agreed to pay an additional $1,000 penalty to the Department of Fish and Wildlife.

In all, 13 wolf deaths were recorded in 2017 — 12 of which were caused by humans. The state issued lethal take permits that resulted in four wolves being shot from the Harl Butte pack in Wallowa County, and one from the Meacham pack in Umatilla County, to try and curb livestock depredations. Lethal take is allowed under Phase III of the Wolf Management and Conservation Plan in Eastern Oregon.

Meanwhile, OR-48 from the Shamrock pack was unintentionally killed by an M-44 cyanide trap that had been set by USDA Wildlife Services on private land; a pup from the Ruckel Ridge pack was killed by a livestock protection dog; and OR-30 was shot by an elk hunter in Union County who claimed he was acting in self-defense. The hunter, 38-year-old Brian Scott, was not charged with a crime.

Sean Stevens, executive director of the Portland-based environmental group Oregon Wild, was sharply critical of poachers and the state killing wolves. Most recently, the agency approved killing two more animals from the Pine Creek pack in Baker County for preying on cattle.

“The wolf population is stagnant because poachers and ODFW agents are killing more wolves — this despite the fact that ODFW admits livestock depredations are down from last year,” Stevens said. “It demands accountability from an agency that insists on killing more wolves every year.”

The annual wolf report shows confirmed livestock depredations decreased from 24 in 2016 to 17 in 2017. Those cases involved 11 calves, one llama, one alpaca and 23 domestic fowl.

Quinn Read, Northwest director for the group Defenders of Wildlife, said the evidence shows Oregonians can coexist with wolves.

“ODFW should be looking at how to support these successes, rather than encouraging reckless lethal removal protocols,” Read said.

Ranchers, however, say they will need more support from the state to ensure they can protect their businesses and their livelihood.

George Rollins, a Baker County rancher and co-chairman of the wolf committee for the Oregon Cattlemen’s Association, said the latest depredations by the Pine Creek pack resulted in three dead calves, four wounded and another three missing.

“The people taking the economic loss and the emotional stresses are the producers,” Rollins said. “It gets very tiresome. They feel like they’re not being supported. Nobody’s listening to them.”

As the population of wolves increases and continues to move west, Rollins predicts there will be more wolf-livestock conflicts in the future. He said the Department of Fish and Wildlife needs to give more control to local authorities to handle so-called “chronic depredators.”

The Oregon Cattlemen’s Association is also seeking to tie state funding for compensating ranchers directly to the rising wolf population, Rollins said, to make sure they can afford nonlethal tools such as hiring range riders to haze wolves.

One such bill was proposed by state Rep. Greg Barreto, R-Cove, but died in committee.

“If we want to manage the wolf, we need to make sure we can fund it properly,” Rollins said.

The Department of Fish and Wildlife is still working to pass an overdue five-year update of its wolf management and conservation plan. The Fish and Wildlife Commission decided in January to do more stakeholder outreach and try to reach a greater consensus. No date for adoption has been scheduled.