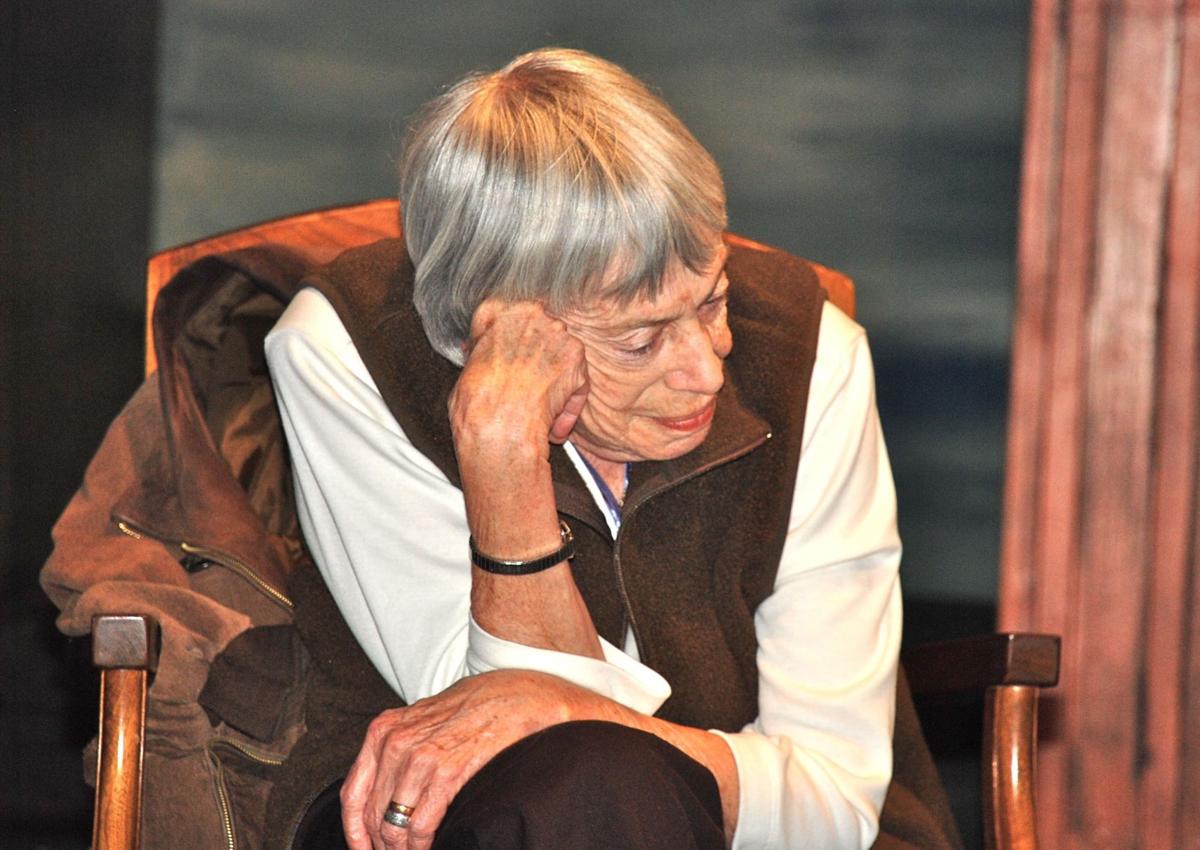 Author Ursula LeGuin, who live part-time in Cannon Beach, listens intently to a fellow author during a “Get Lit” panel discussion in Cannon Beach in 2013. LeGuin was awarded the Medal for Distinguished Contribution to American Letters at the Nov. 19 National Book Awards ceremony. 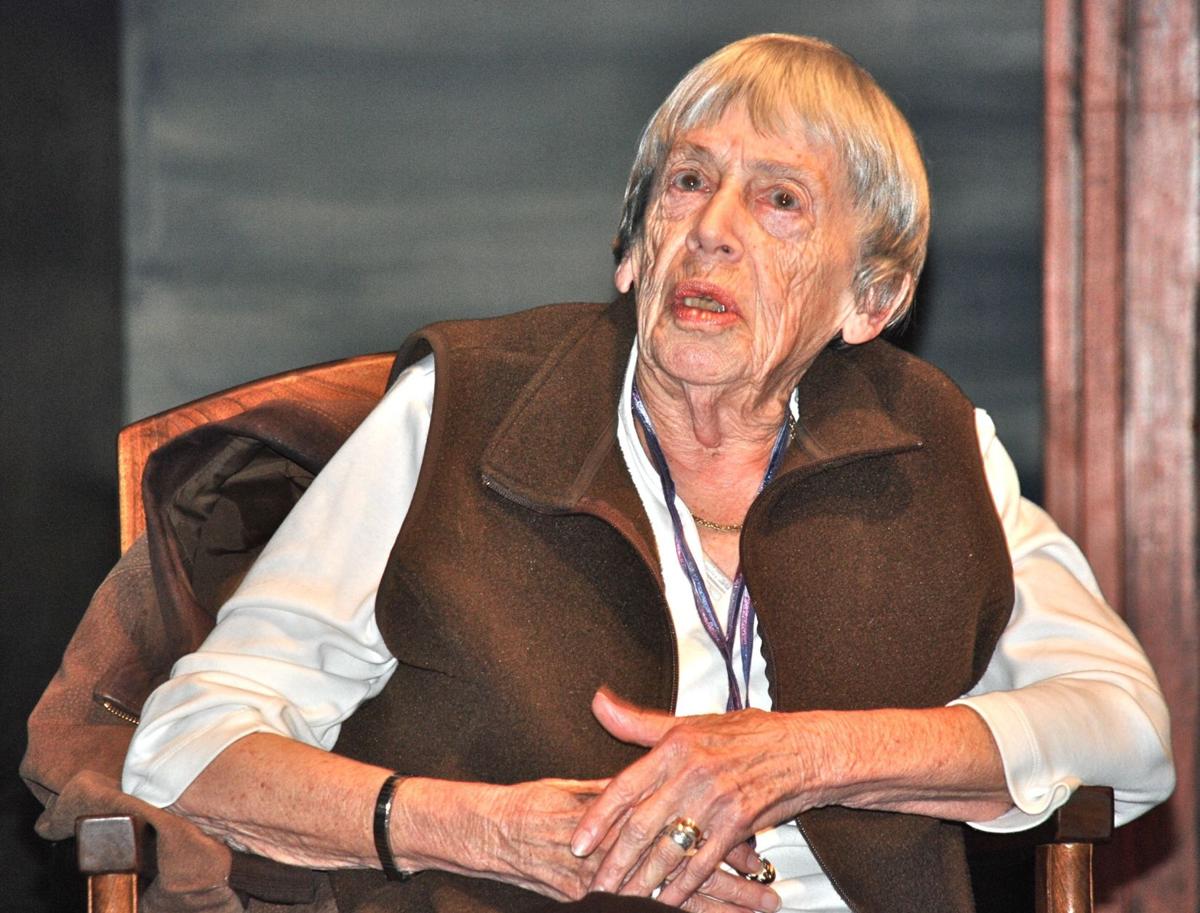 Oregon author Ursula LeGuin talks about her profession as a writer during the “Get Lit” conference in Cannon Beach. Much of her work uses Cannon Beach as a backdrop. At the recent National Book Awards ceremony LeGuin denounced established book publishers, as well as Amazon, for putting profit over art.

Author Ursula LeGuin, who live part-time in Cannon Beach, listens intently to a fellow author during a “Get Lit” panel discussion in Cannon Beach in 2013. LeGuin was awarded the Medal for Distinguished Contribution to American Letters at the Nov. 19 National Book Awards ceremony.

Oregon author Ursula LeGuin talks about her profession as a writer during the “Get Lit” conference in Cannon Beach. Much of her work uses Cannon Beach as a backdrop. At the recent National Book Awards ceremony LeGuin denounced established book publishers, as well as Amazon, for putting profit over art.

In a speech given at the 65th annual National Book Awards last month that has since gone viral, Ursula K. Le Guin, an award-winning fantasy/sci-fi novelist and part-time Cannon Beach resident, articulated what has been on the minds of many authors, publishers and others interested in books and their place under capitalism.

While accepting the Medal for Distinguished Contribution to American Letters at the Nov. 19 awards ceremony in New York, Le Guin said that books should not be viewed merely as commodities, valued only insofar as they can make money for corporations.

“Right now, I think we need writers who know the difference between production of a market commodity and the practice of an art,” she said, provoking loud, appreciative applause. “Developing written material to suit sales strategies in order to maximize corporate profit and advertising revenue is not quite the same thing as responsible book publishing or authorship.”

She denounced the practice of giving sales departments control over editorial content.

She called out her own publishers — HarperCollins, Houghton Mifflin Harcourt, Penguin Random House and Simon & Schuster — who, “in a silly panic of ignorance and greed,” decided to charge public libraries for an e-book “six or seven times more than they charge customers.”

She went after Amazon.com for trying to “punish a publisher for disobedience,” referring to the online retailer’s attempt to force Hachette Book Group, a French publishing company, to change its e-book prices to boost Amazon’s bottom line.

“And I see a lot of us, the producers who write the books and make the books, accepting this, letting commodity profiteers sell us like deodorant and tell us what to publish and what to write,” Le Guin said.

“The profit motive,” she continued, “is often in conflict with the aims of art.” Though the power of capitalism “seems inescapable,” “so did the divine right of kings.”

Lest American literature gets “sold down the river,” she called upon her fellow artists to resist the temptation to kowtow to corporate pressures. “Freedom,” she said, will be their reward.

Once clips of her five-and-a-half-minute speech hit the Internet, Le Guin was pleased and surprised by the largely warm reception to her words. “It seemed like it was something that people kind of wanted to hear,” she said in an interview with the Gazette.

As far as she knows, her speech hasn’t received much negative attention — at least not yet.

“I have been expecting some backlash from the people who kind of look up to Amazon as a great provider of everything,” she said.

Asked if she believes Amazon does more harm than good, she said, “Amazon is not doing good to American literature at this point.”

However, she recognizes that “Amazon is a notoriously flexible company” that may very well change its ways. “I wish it was as simple as just being anti-Amazon. It’s like trying to be anti-Google: You can’t be,” she said.

There will always be new ways of doing and making things with new technologies, she said. But she doesn’t see why the relationship among authors, publishers and readers “should be changed for the convenience of the people who are doing nothing with literature except selling it as a commodity,” she said.

Amazon is “doing nothing but making money from it,” she said. “They have no other relationship to literature. It’s just a money cow.”

Has Le Guin herself ever been forced to compromise her artistic vision or accept interference from such “profiteers”?

“No, but I’ve been invited to sell my soul,” she said, laughing.

Whenever she ran up against a publisher whose ways she didn’t like, “I went to another publisher. I just said, ‘No, I don’t do that,’” she said. “There is always somebody who will. There are people who want to sell out ... It takes all kinds.”

Watt Childress, co-owner of Jupiter’s Rare & Used Books in Cannon Beach, said Le Guin’s speech — which he views as a “brilliant, perfectly timed” defense of the arts — made him cry.

“She speaks from a place and a position that commands respect,” said Childress, who has been friends with Le Guin and her husband, Charles, for more than a decade. “For her to put art back in the center of the stage is very important.”

He added that, in his opinion, corporate profits have been front-and-center in the publishing industry for a long time.

Le Guin’s work “rises to the level of epic myth that burrows deeply into our consciousness. She knows what good art does. She knows what good storytelling and good writing does,” Childress said, “and so she’s one of the best people that I can imagine to deliver that message, and she did it beautifully.”

Matt Love, an independent local author, decided long ago to avoid selling through the “corporate monolith” that includes Amazon, he said. He set up his own publishing house, the Nestucca Spit Press, based in Astoria.

“I just chose to do it myself, and if I (sold) my books through Amazon, I’d probably lose money,” he said. Dealing with Amazon “is something I’d never be willing to do, ever.”

But, like Le Guin, Love recognizes that many authors — particularly authors who write esoteric genre fiction, like vampire romance novels — self-publish through Amazon. And though Le Guin’s speech has gotten a lot of play, “I just think that there may be more to it than I even can grasp or even care to grasp,” he said.

As for changing the profit-driven system — which, she said, tends to produce many “throwaway books” — Le Guin admits she doesn’t have a game plan. “Nobody does,” she said. But change begins by “just being aware that there is a problem here, and the only way we’ll keep our autonomy as writers and publishers is to be aware that it’s being threatened.”