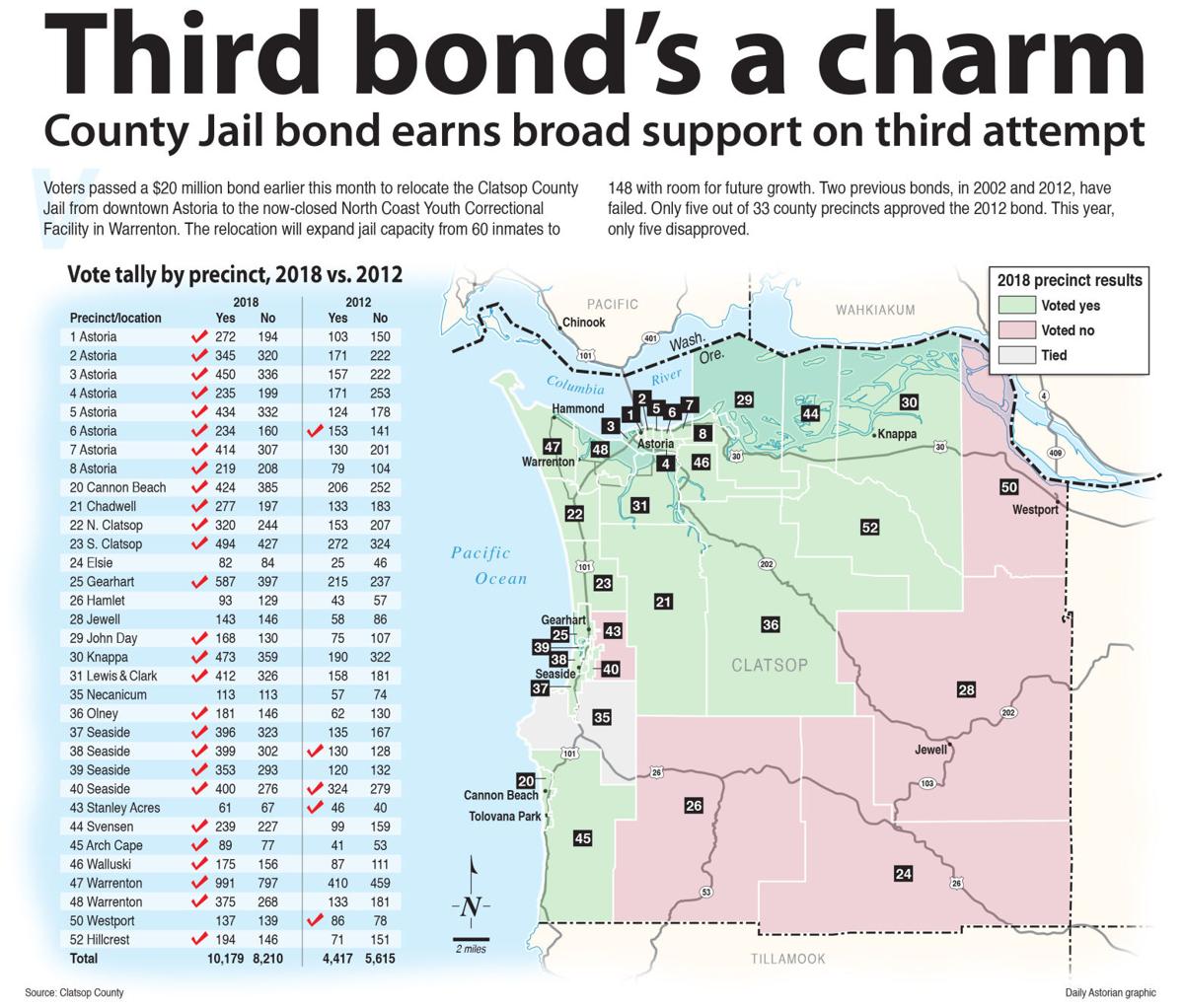 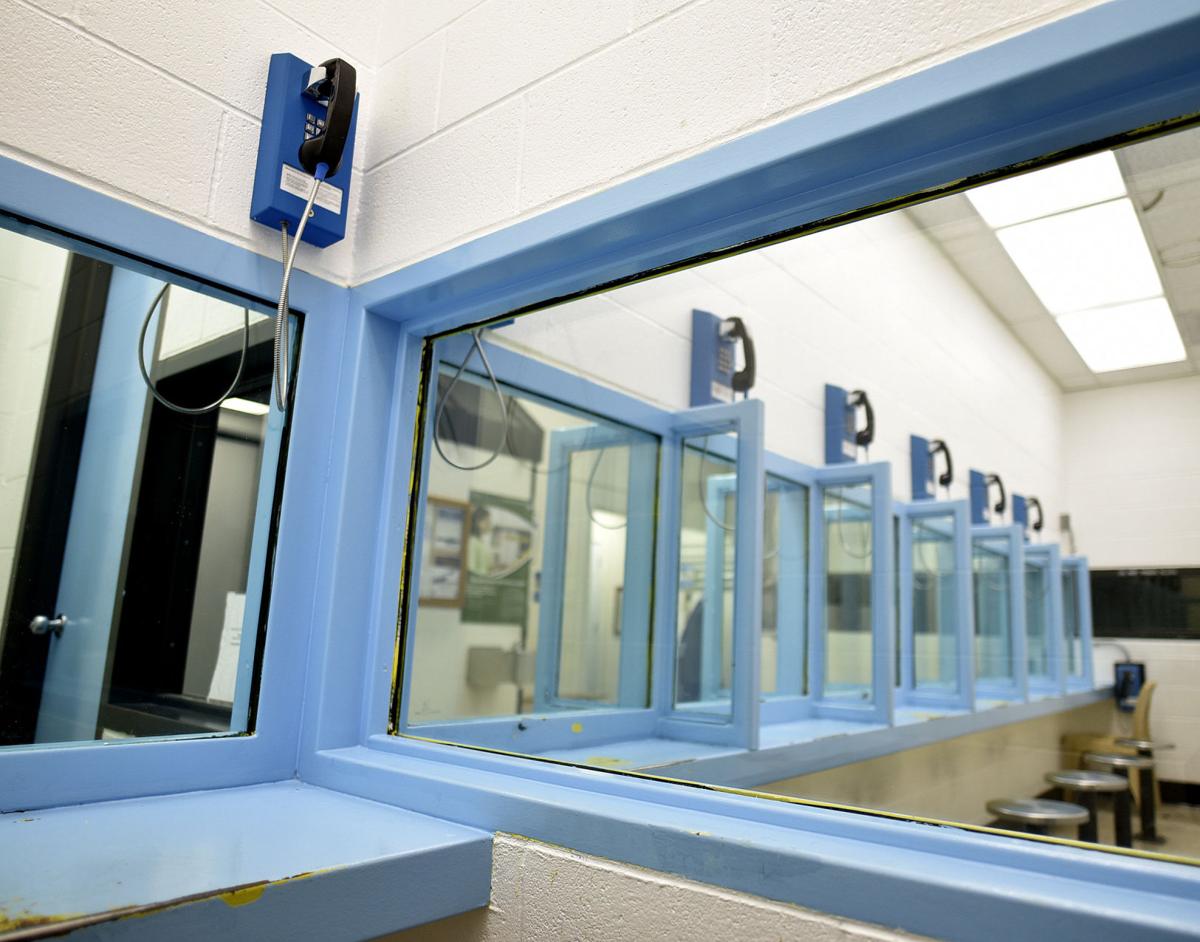 Voters in Clatsop County supported a jail bond this year after rejecting bond measures in 2012 and 2002.

Voters in Clatsop County supported a jail bond this year after rejecting bond measures in 2012 and 2002.

As Clatsop County pushed its third jail bond in 16 years, officials privately offered doubts. Bond measures in 2002 and 2012 earned less than 45 percent support from voters. What would be different this November?

“I, quite frankly, thought it was going to fail,” said Clatsop County District Attorney Josh Marquis, who supported the bond.

In a surprise, 55 percent of voters backed the jail’s relocation from Duane Street in Astoria to the shuttered North Coast Youth Correctional Facility in Warrenton. The $20 million bond will help expand jail capacity from 60 inmates to 148 with room for future growth.

Voters in only five out of the county’s 33 precincts approved of the 2012 bond. This year, only five precincts disapproved.

“I pride myself in my ability to be a political prognosticator, and I did not predict this,” Marquis said. “I was pessimistic.”

Due to overcrowding at the downtown jail, inmates are routinely released from custody early. Ideally, the jail would typically be only 80 to 85 percent occupied, Marquis said.

Sheriff Tom Bergin has been around for all three bonds, the last two as the county’s top cop. He has said the previous attempts lacked proper research and organized promotion.

Discussions of a new jail began a few months before the youth facility closed in 2017. The sheriff’s office discussed several options with DLR Group, a Portland-based architecture firm.

The sheriff also consulted a number of people with previous jail bond experience, including engineers and project managers.

“We had so many — different, I guess — styles, people with so many backgrounds that were able to help us do this right,” Bergin said. “We really did our homework.”

Helping the sheriff were two of his deputies ­— Chief Deputy Paul Williams and Lt. Matt Phillips, the jail’s commander — and Assistant County Manager Monica Steele. As county employees, they could not advocate for the bond. But they appeared at city council meetings and with private organizations to provide information.

Part of the pitch for a new jail was deputy safety, wider access to mental health and substance abuse treatment.

“I think the mental health issue is big and, just, the huge opiate problem,” Bergin said. “Once the revolving door stops, these people can get help.”

“I think it’s just educating people, making sure they know we’re not trying to pull the wool over their eyes,” Bergin said.

But the bond campaign still faced a few potential land mines, including two local school bonds that were also on the ballot and at a steeper price.

“I would say the common theme was that everybody saw the need for the jail. Everybody sort of wonders why the cost was so high,” Steele said. “We reiterated that remodeling the (Warrenton) facility would keep the costs down.”

Another stumbling block could have been Bergin’s letter, co-signed by several other sheriffs throughout the state, supporting state Measure 105, which would have repealed Oregon’s sanctuary law.

The measure failed, but Commissioner Scott Lee, the chairman of the county commission, criticized Bergin’s decision. The sheriff’s letter forced the commissioner to reach out to like-minded progressive groups to assure them that the jail bond is not related to immigration enforcement, Lee said.

“Folks are really shy about the industrial prison complex,” Lee said. “I told everybody, particularly on my side of the fence, that this facility was not going to be used for (U.S. Immigration and Customs Enforcement) detainees.”

Now, the moving process at the jail begins. County commissioners will decide next year how to underwrite the bonds and finalize a design.

At some point, the county will need to figure out what to do with the jail building in Astoria. But, for now, the focus remains on the new one.

“While there may be a number of ideas, we’re going to continue using the current jail,” Steele said. “We’re looking at two years at the earliest before we begin to move into the new jail.”

The sooner, the better, for law enforcement.

“I think we’re going to have a much more positive conversation about public safety in December 2020 than we’re having right now,” Marquis said.