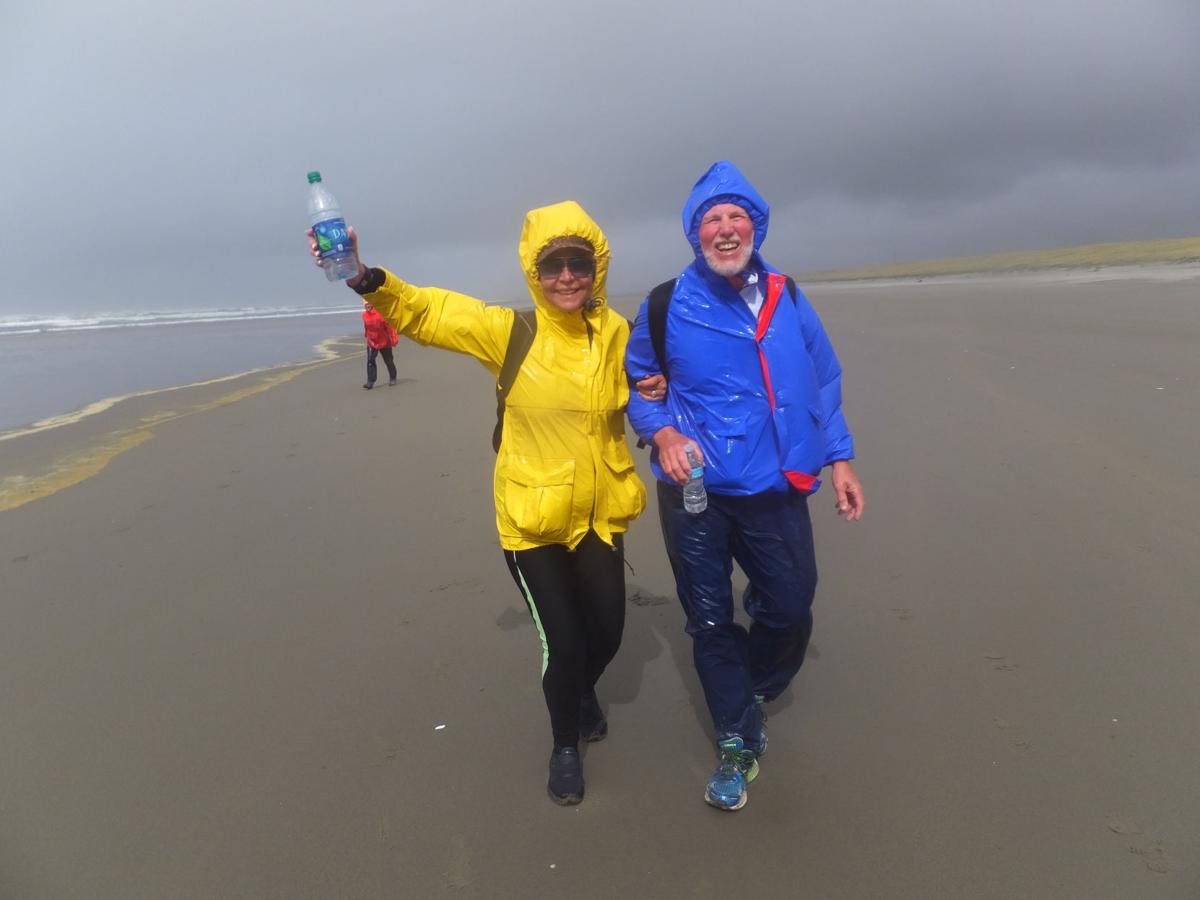 Kathleen and Dave Zunkel of Warrenton were two of 50 participants on the inaugural three-day CoastWalk Oregon. 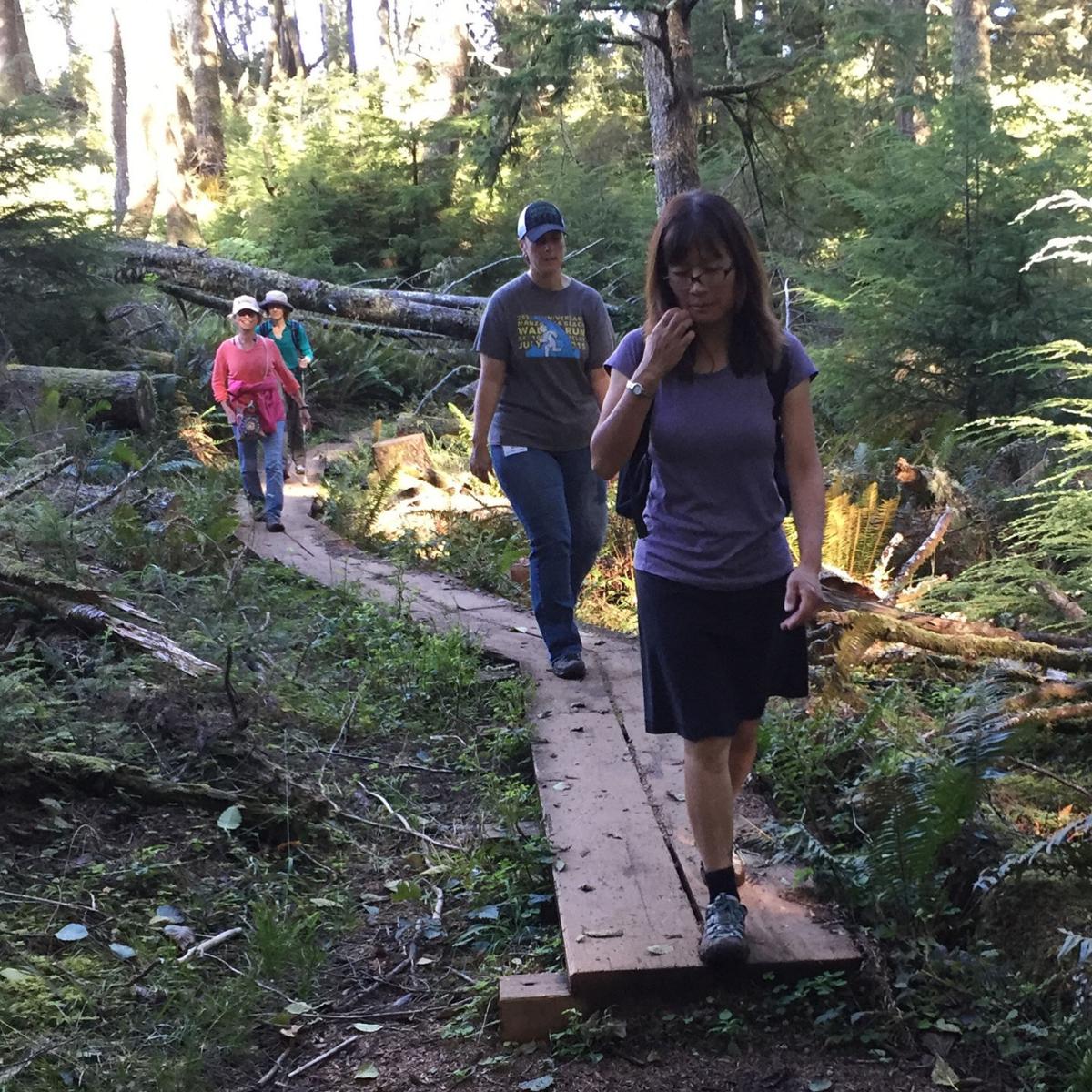 Kathleen and Dave Zunkel of Warrenton were two of 50 participants on the inaugural three-day CoastWalk Oregon.

Cheryl Lund embarked on CoastWalk Oregon solo, without much knowledge of the North Coast Land Conservancy. By the end of the three-day adventure, she had made friends, seen new sights and gained a better understanding of the conservancy’s work.

“The friendships that I made in those three days were just wonderful,” said Lund, of Portland. “I went down as a solo hiker. The next thing you know, I’d met some of the best people.”

Lund was one of the 50 participants who hiked 30 miles for the inaugural CoastWalk, which marked the conservancy’s 30th year of helping to protect land on the Oregon coast. Participants from five states and staff members hiked from Astoria to Cannon Beach Sept. 23-25. Depending on their pace, people hiked for three to five hours each day.

“It went wonderfully. It was super inspiring to see these folks,” the conservancy’s Executive Director Katie Voelke said. “By the end, it was glorious weather and there was wonderful camaraderie that the group built. Overall, they have a whole new perspective and respect for the Oregon coast.”

Though familiar with the coast, Lund noticed parts of the beach she had never seen before during the walk.

“They brought so many new things to me, even as an Oregonian,” she said. “It was worth every penny and every minute of my time.”

With howling wind and rain, the first day was challenging, but hikers made it from Clatsop Spit to Sunset Beach.

Before the event, the conservancy communicated to participants what to bring, what to wear and how to train — and that the walk would happen rain or shine.

“People were really prepared, but I don’t think people knew what it meant to walk 10 miles in sideways rain,” the conservancy’s Development Director Lorraine Ortiz said. “Now they know. The majority didn’t turn around and they had such a sense of accomplishment and great attitudes.”

Participants were rewarded with clear, sunny days when they hiked from Sunset Beach to Cartwright Park in Seaside on day two, and trekked over Tillamook Head to Cannon Beach on day three. After successfully completing the walk, the group celebrated at Public Coast Brewing.

The walk was an opportunity to educate participants on the North Coast Land Conservancy properties along the way, such as the recently acquired Boneyard Ridge.

“We’re thrilled. We are not an event organization; we’re a land conservation organization,” Ortiz said. “But this is helping to move our mission forward because it gets people out, boots on the ground, to understand why it’s important that we’re doing the work that we do.”

The event was a good fit for the conservancy, Ortiz said.

“People use golfing to do business,” she said. “We do hiking.”

The conservancy is already planning next year’s CoastWalk, which might start in Cannon Beach and head south, Ortiz said.

Ortiz said the CoastWalk could partner with the Cape Falcon Marine Reserve, Oregon State Parks and the Haystack Rock Awareness Program in the future.

“It’s neat that (CoastWalk) is grabbing the attention of other organizations that see the value in it,” Ortiz said. “It enhances not only our mission but theirs too. It’s a win-win for everyone.”

After her experience, Lund looks forward to supporting the conservancy at next year’s CoastWalk.

“They are trying to protect our beautiful Oregon coast for all of us,” she said. “Overall, I wouldn’t change a thing. Even that crazy windy day — I am just very thankful that was day one.”