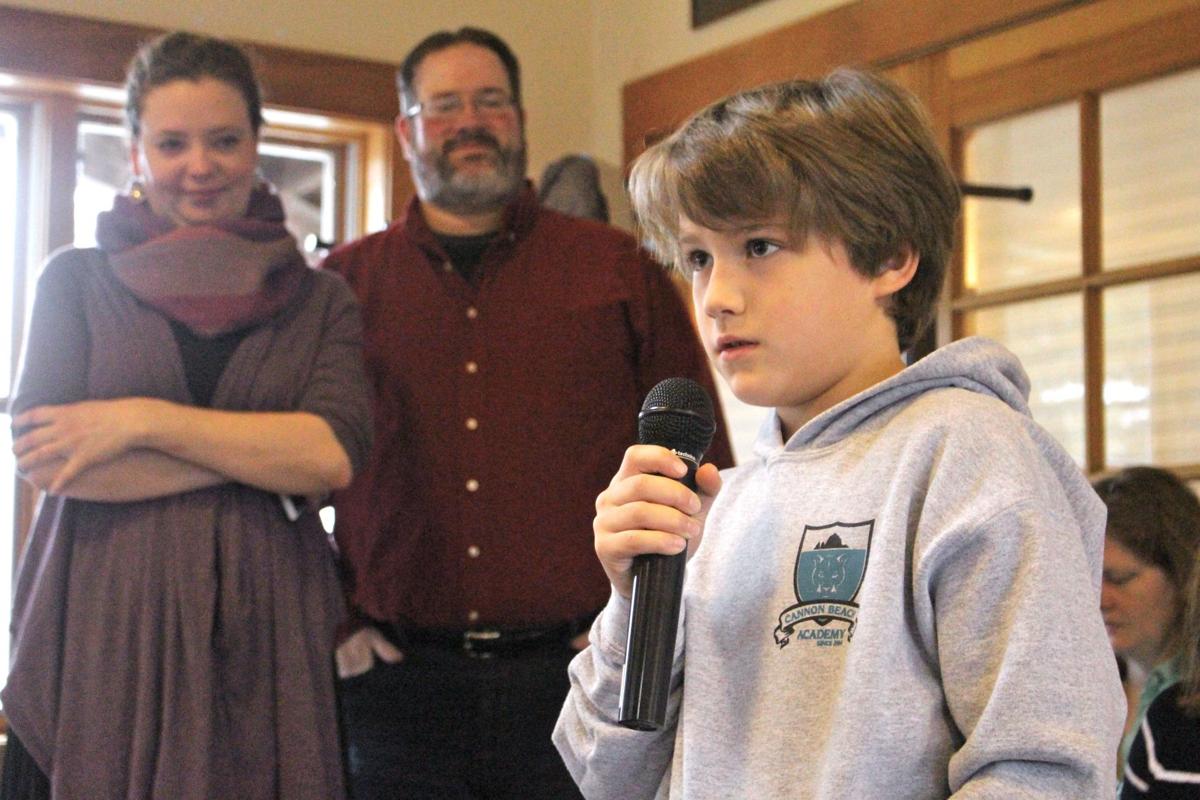 ERICK BENGEL PHOTO Jacob Dewey, 8, of Cannon Beach, tells his elected officials at a town hall meeting that his city needs a school. Behind him are Jenni Tronier, left, and her husband Ryan Hull, president of the Cannon Beach Academy charter school board. 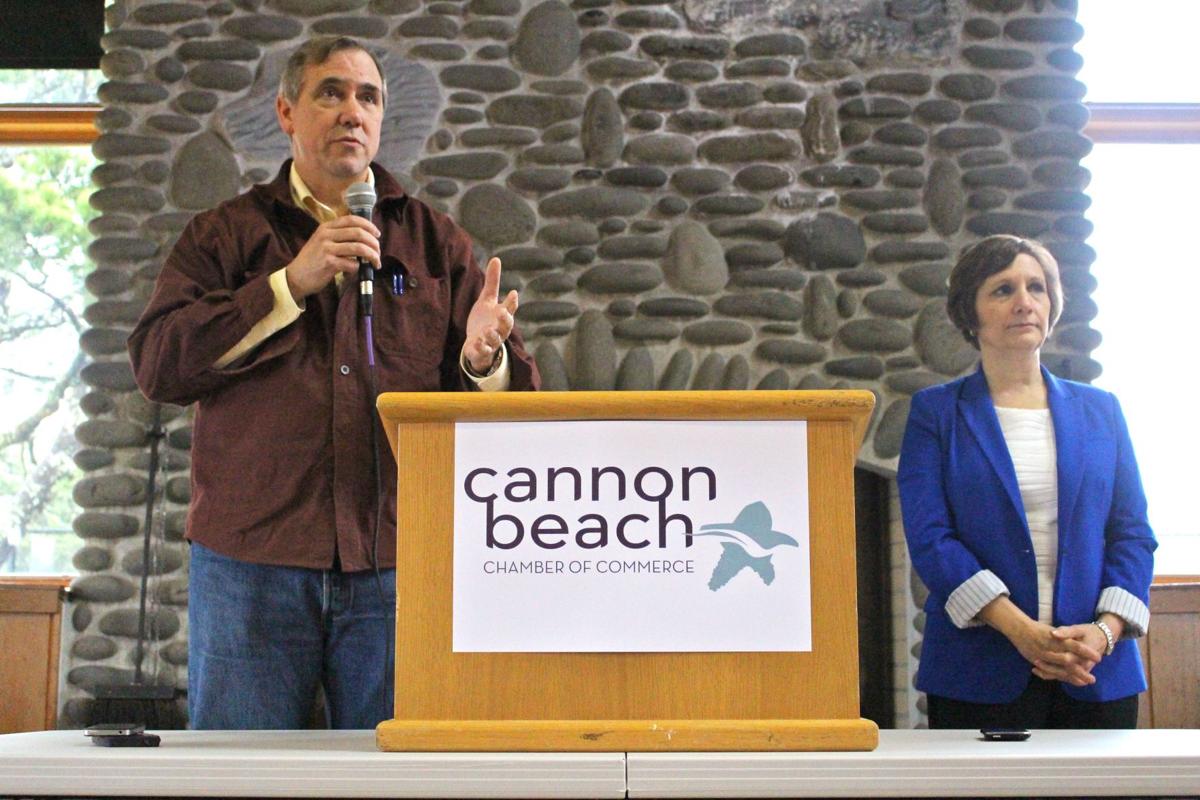 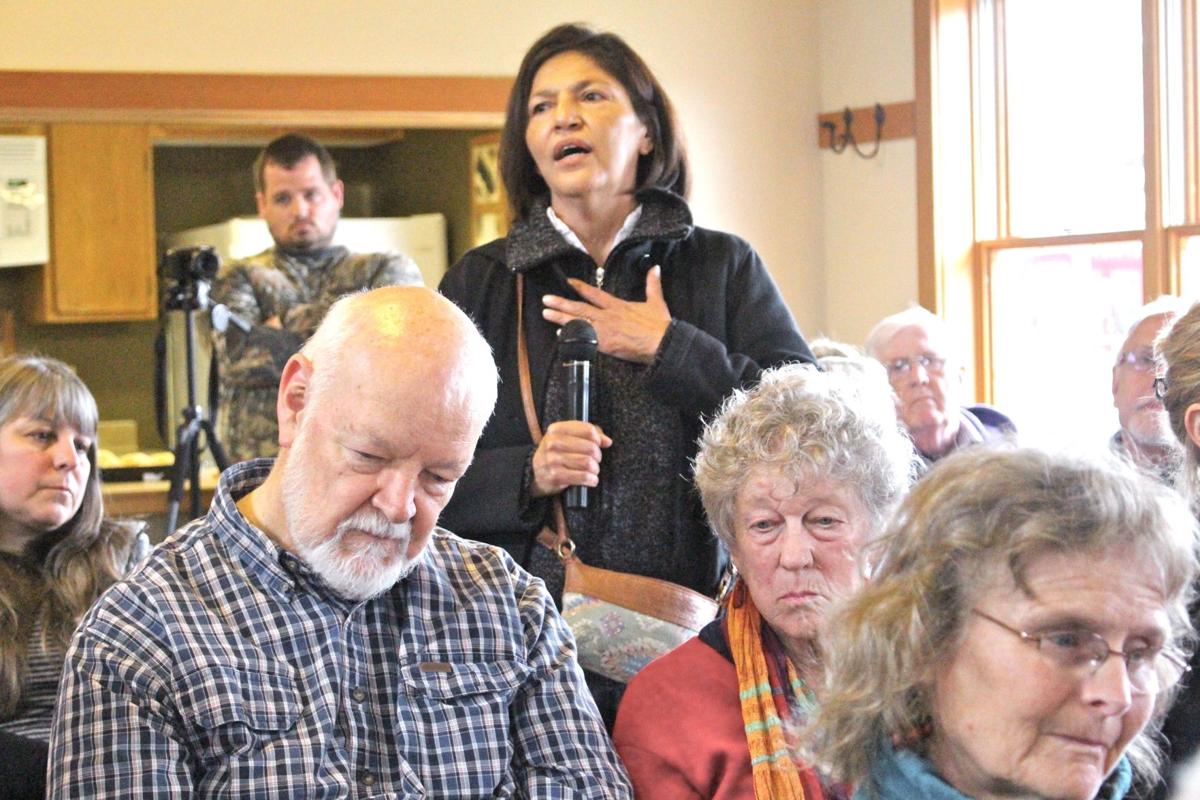 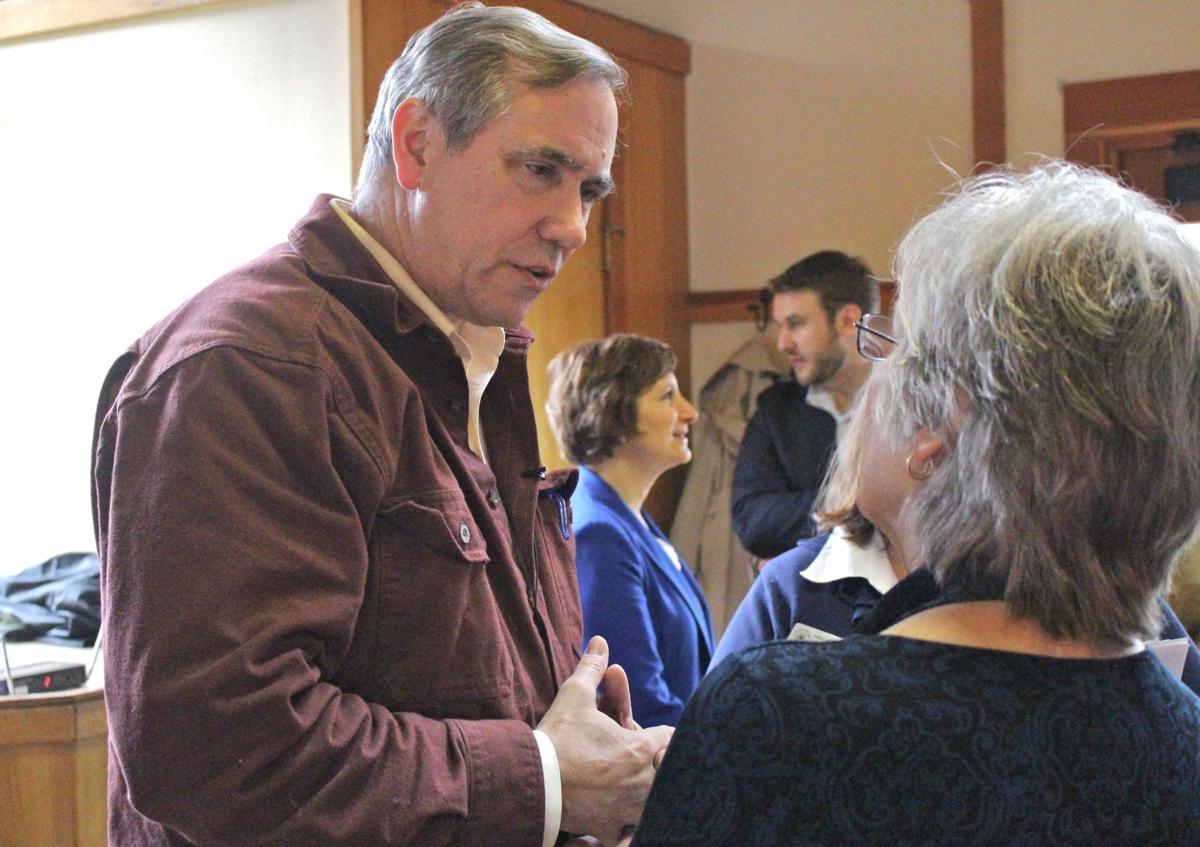 ERICK BENGEL PHOTO Jacob Dewey, 8, of Cannon Beach, tells his elected officials at a town hall meeting that his city needs a school. Behind him are Jenni Tronier, left, and her husband Ryan Hull, president of the Cannon Beach Academy charter school board.

Wearing a gray hooded sweatshirt with the Cannon Beach Academy’s logo emblazoned on it, 8-year-old Jacob Dewey took the microphone and told Senator Jeff Merkley (D-Ore.) and U.S. Representative Suzanne Bonamici (D-Ore.): “We need a school in Cannon Beach. I want to know how you can help us with that.”

The homeschooled son of Kellye and Ryan Dewey, a Cannon Beach couple, addressed the state politicians at the Cannon Beach Community Hall, where Merkley and Bonamici held a joint town hall meeting on the morning of April 3.

“This is the part of the job we really enjoy, is getting up here, talking to our constituents, finding out what’s on their minds,” the congresswoman said.

The discussion of the North Coast’s most pressing social and political issues made for a packed hour, and touched on many familiar local topics: from the need to keep a liquefied natural gas project away from Warrenton, to the importance of fully funding the Land and Water Conservation Fund; from the desire to restore federal recognition to the Clatsop-Nehalem Confederated Tribes, to the effort to establish a charter school in Cannon Beach.

In June 2013, the Seaside School District closed Cannon Beach Elementary School and transferred its students to Seaside Heights Elementary School. Since then, a grassroots movement to set up a charter school, the Cannon Beach Academy, has taken shape, with the school’s organizers now aiming for a fall 2016 opening.

“It is a very weighing time on a community, and it gets worse and worse as you don’t have a school in your community,” Ryan Hull, the academy’s board president, said.

Though the federal government doesn’t directly help communities build schools, Merkley said it may be possible for some Federal Emergency Management Agency funds to help finance the academy since new schools must be located outside the tsunami inundation zone.

Bonamici noted that, because the academy would be a public charter school, additional funds might be available. “So we’ll be looking into that as well, because we’d like to help you get a school,” she said.

Originally, Merkley had planned to give the academy a United States flag, which had been flown over the United States Capitol, at the town hall meeting. The senator occasionally highlights local organizations devoted to education, like schools and libraries, in this way, Courtney Warner Crowell, his state communications director, said.

But, because of unspecified complications, Merkley’s office said they would have to mail the flag to the academy’s organizers along with its certificate of authenticity.

The controversial Oregon LNG (liquefied natural gas) project, involving the company’s plan to construct a terminal and pipeline for exporting the fossil fuel on the Skipanon Peninsula, became an urgent theme among the audience members.

By allowing Oregon LNG — which is controlled by a U.S. conglomerate headquartered in New York — to create a facility near the mouth of the Columbia River, “we would be throwing away this beautiful place that we have for the gain of someone else, somewhere else,” said Roger Rocka, of Astoria.

Given that many scientists expect a massive Cascadia Subduction Zone earthquake to occur at an unknown future date — which may cause a tsunami to flood the Pacific Northwest coastline — LNG terminals “just don’t belong in this hazardous area,” said Jan Mitchell, of Astoria. “I just can’t say enough about how much this area opposes those operations.”

Bonamici acknowledged that the LNG issue is often framed as a trade-off between creating jobs and protecting the environment.

“I understand there is a need to build the economy, especially rural economies. There are many ways we can do that without jeopardizing the safety of our residents,” she said. “And the more I learn about the Cascadia Subduction Zone and the resilience issues, and what would happen on the coast ‘when’ (the earthquake occurs) — not ‘if’ — the more concerned I am.”

Merkley said the “evolving science on natural gas” has changed the public’s understanding of the LNG issue.

“Now that we see fracking in full force, we have a huge problem with fugitive methane gas that escapes. Methane is a very potent global warming gas. By some estimates now, natural gas is equivalent to coal in terms of its global warming impact,” he said. “My basic feeling is, we should have a ‘go slow’ strategy, in part, so we can understand the science.”

Josie Peper, of Astoria, wondered if the Lower Columbia River Estuary could be granted federal protection as a National Scenic Area, like the Columbia River Gorge, to avoid environmentally unsound projects altogether.

Merkley said he does not view federal protection status as “a good fit for the Astoria area, where there’s economic development to be undertaken.”

However, he is working with other Northwestern states — Washington, Idaho and Montana — to create legislation that would provide for the river’s “protection and decontamination,” he said.

• Nadia Gardner, of Arch Cape, asked about the possibility of fully funding and permanently reauthorizing the federal Land and Water Conservation Fund program, which provides funds and grants to regional conservation projects throughout the country. The fund expires September 2015.

Merkley said he will use his position on the Committee on Appropriations to advocate for the continued funding of the program.

• Roberta Basch, cultural adviser to the Clatsop-Nehalem Confederated Tribes, asked for Merkley’s and Bonamici’s support in restoring federal recognition to the tribe. She said that the tribe would then be given rights that allow them to preserve both their culture and sites sacred to them for future generations.

Bonamici, who introduced a bill in the last Congress to restore the tribe’s federal recognition, said she will continue to work on the issue.

However, “I just want to be realistic and say that there wasn’t much appetite on the other side of the aisle to even move the bill into a hearing,” she added. “Restoring rights to a tribe is a big process. It takes time.”

• Ed Johnson, a Cannon Beach resident, expressed concern that the state had bypassed Cannon Beach’s residents last month, when the Oregon Department of Transportation removed about 30 trees, 8 or more inches in diameter, from U.S. Highway 101’s scenic byway. Because the trees were in a state right of way, ODOT was legally able to carry out the project without first obtaining a city permit.

Merkley said his staff will look into the issue to see where among the different levels of government coordination may be possible on future tree-removal projects.

Bonamici added she would work with Merkley’s office and those of state representatives “on better coordination to make sure that the local needs are more recognized.”