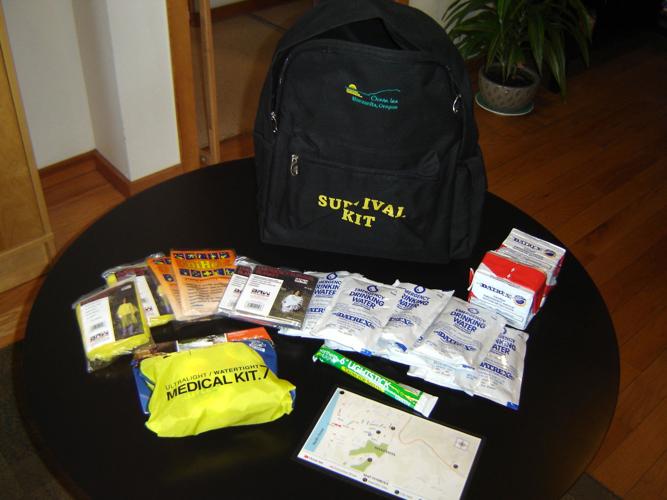 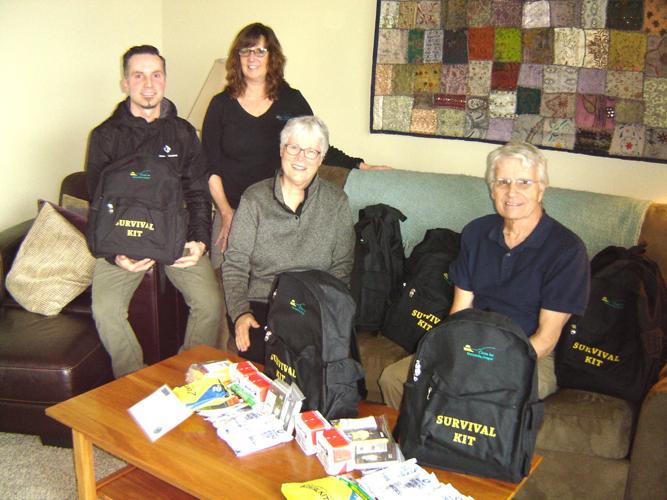 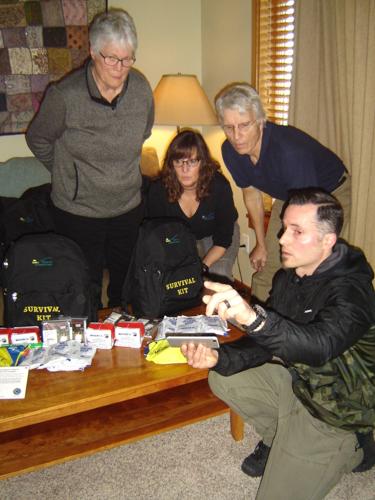 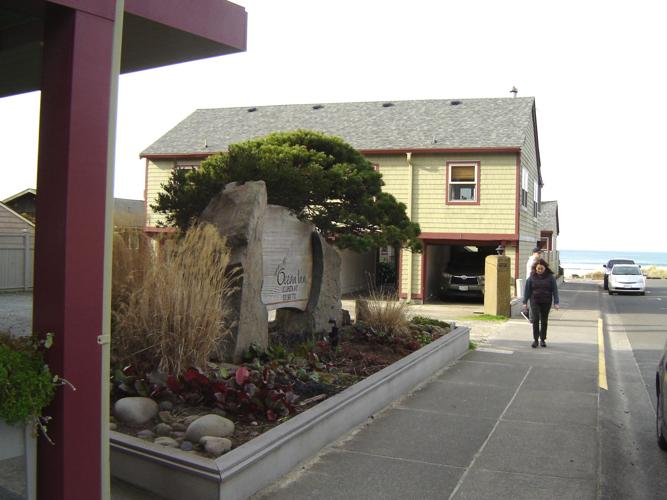 Ocean Inn, a favorite destination for tourists, is precariously perched on the shores of the Pacific and in the event of a tsunami would be among the first structures in Manzanita to be destroyed.

Ocean Inn, a favorite destination for tourists, is precariously perched on the shores of the Pacific and in the event of a tsunami would be among the first structures in Manzanita to be destroyed.

In what could be a first on the Oregon coast, a lodging facility in Manzanita has equipped its guest rooms with emergency go bags should the unthinkable happen, namely a devastating tsunami resulting from an earthquake along the Cascadia Subduction Zone 70 miles offshore.

Because of its close proximity to the beach, the Ocean Inn, located at the western end of Laneda Avenue in Manzanita, has been a favorite with tourists and out-of-towners for a quarter century. The 10-room inn affords its guests with wonderful views of the Pacific and is mere footsteps away from Manzanita’s sandy beaches. On the flip side, it has the dubious distinction of being one of the first structures along the beach to be virtually wiped out by a wall of water when “the big one” happens. Well aware of that reality, owners Larry and Janice Zagata began thinking of their social responsibility as hotel owners to their guests and their safety.

“After attending an emergency preparedness meeting a few years ago, I really began thinking seriously about this,” Janice Zagata said. “There’s always that element of surprise, natural disasters can happen at any time.”

The preparedness meeting referenced by Zagata was one of many sponsored by the Emergency Volunteer Corps of Nehalem Bay the past 11 years. The emergency volunteer corps came into being shortly after the December 2007 storm that struck the North Coast accompanied by hurricane force winds that toppled trees and power poles. Many areas were left without electricity for a week or more suggesting that a emergency response organization made up of volunteers to lend a hand during natural disasters was a good idea. Today, with upwards of 400 volunteers, the corps is the primary reason Manzanita, and its nearby neighbors Nehalem and Wheeler, is considered the best prepared community in the event of a major earthquake and tsunami.

It was on a visit to Tonquin Trading in Seaside the Zagatas took the next step in offering its guests peace of mind in addition to a great view and easy beach access. Open since 2016, the outdoor apparel store on Broadway specializes in high-quality backpacking, hiking and emergency preparedness gear.

“I had popped into Jason’s store initially to check out emergency go bags for our personal use,” said Larry Zagata. “But we felt it had gotten to the point that we needed to do something for our guests as well. So, I reached out to Jason and he helped develop an emergency kit to fit our needs.”

Over the course of the next couple of months Tonquin Trading owner Jason Johnson, a one-time North Dakota oil fields safety trainer, came up with a tsunami resiliency kit to fit the needs of Ocean Inn and its guests. Based on double occupancy the two-person tsunami-resiliency kit, or go bag as it is commonly known, includes, at a cost of $70 each, emergency blankets, ponchos hand warmers, water packets, 400-calorie food bars, 12-hour light stick, and basic first-aid-kit. In addition, the Zagatas developed an emergency information sheet with a map of downtown Manzanita showing the most direct evacuation route to the nearest emergency assembly area, in this case Underhill Plaza on Manzanita Avenue. In the event of a Cascadia Subduction Zone earthquake, one would have just 15 minutes following the end of the initial shaking to reach higher ground before a tsunami would inundate lower elevations.

“The go kit is designed to get you where you need to go for additional emergency supplies and instruction,” said Johnson. The supplies included address maintaining one’s core temperature to avoid hypothermia with ample water and basic nutrition for a period of three days.

Emergency volunteer corps officials hope this is only the beginning of a trend that eventually stretches along the entire length of Oregon’s coastline. EVCNB has go bag classes where they sell, at cost, items the participants would need for their personal go bags.

“The go bag is the most critical item to have, especially in the beginning when a natural disaster occurs,” said EVCNB Go Bag Coordinator Linda Cook. “A go bag is an insurance policy. It’s better to be prepared than scared.”

With go bags in each of their 10 guest rooms and offices the Zagatas, who caught on early to the corps’ emergency preparedness message, are glad their guests can rest a little easier.

“Natural disasters don’t wait until its convenient or daylight happens,” Janice Zagata said. “There’s always that element of surprise, when you least expect and are caught off guard.”

“I hope this is the beginning of a trend because it’s the right thing to do,” her husband added.

To learn more about the emergency volunteer corps and emergency preparedness, visit www.evcnb.org. For more information about Tonquin Trading and its services visit www.tonquintrading.com.

It’s Déjà vu All Over Again

Oregon's Economy: Where did all the restaurant and hotel works go?

It’s Déjà vu All Over Again

Oregon's Economy: Where did all the restaurant and hotel works go?