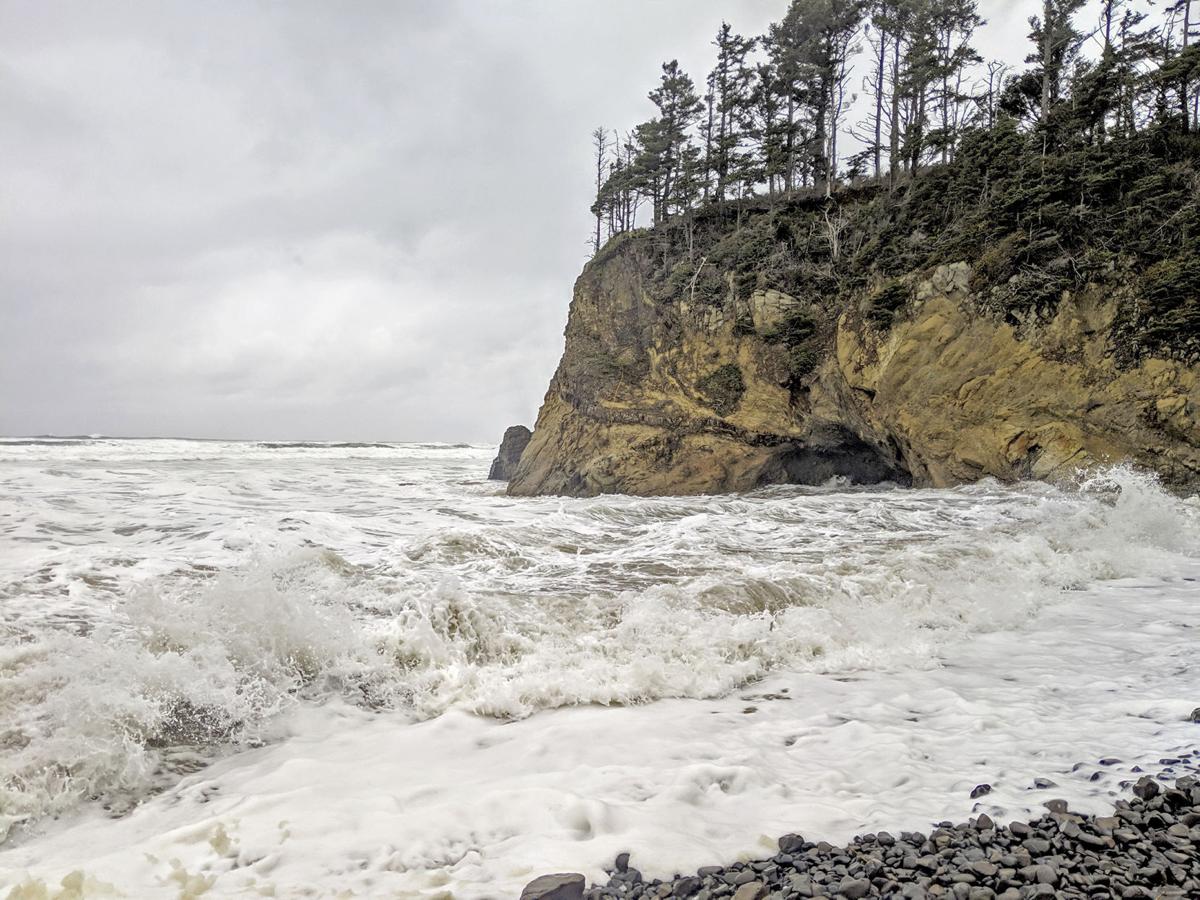 Waves lash Hug Point on a stormy day. Hikers must keep track of tides when walking through this portion of the Oregon Coast Trail. 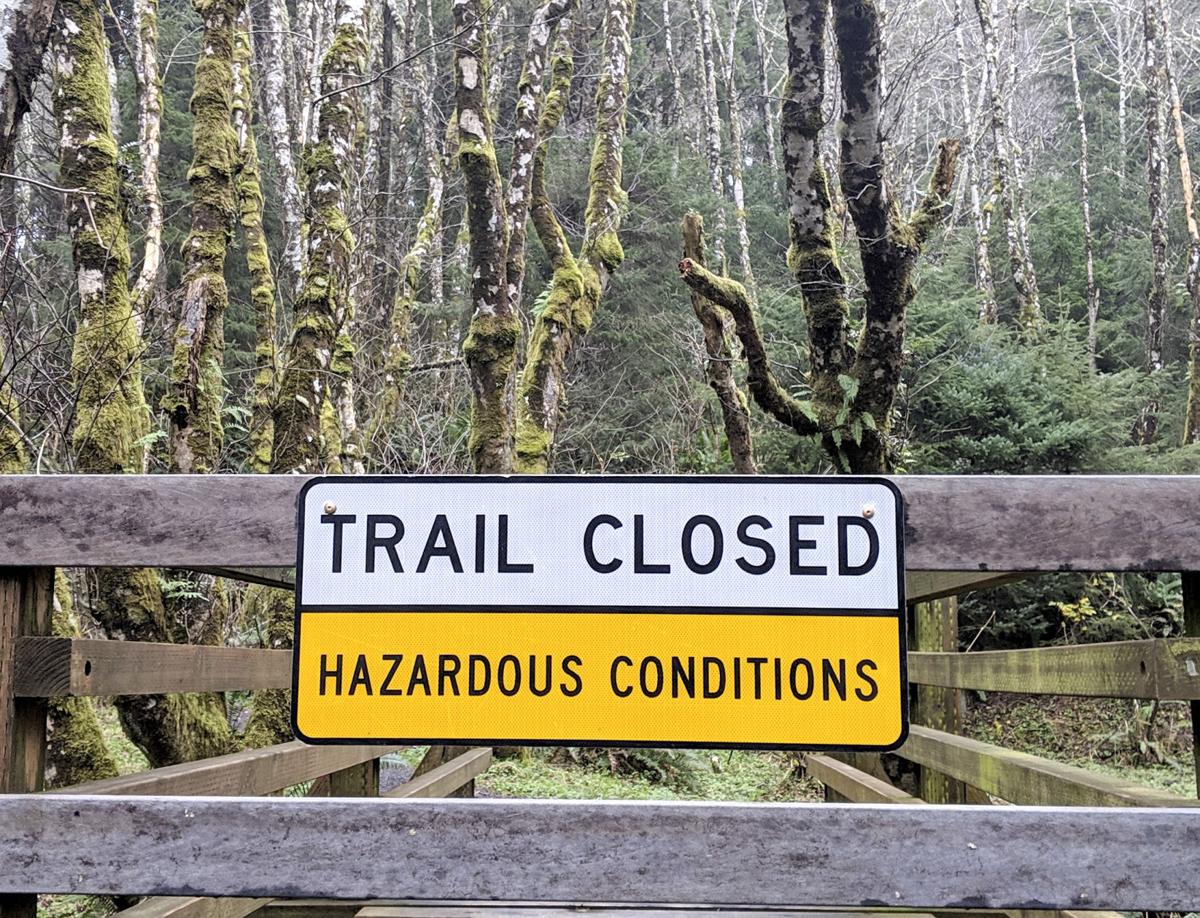 A section of the Oregon Coast Trail in Ecola State Park has been closed after a landslide washed it into the ocean. 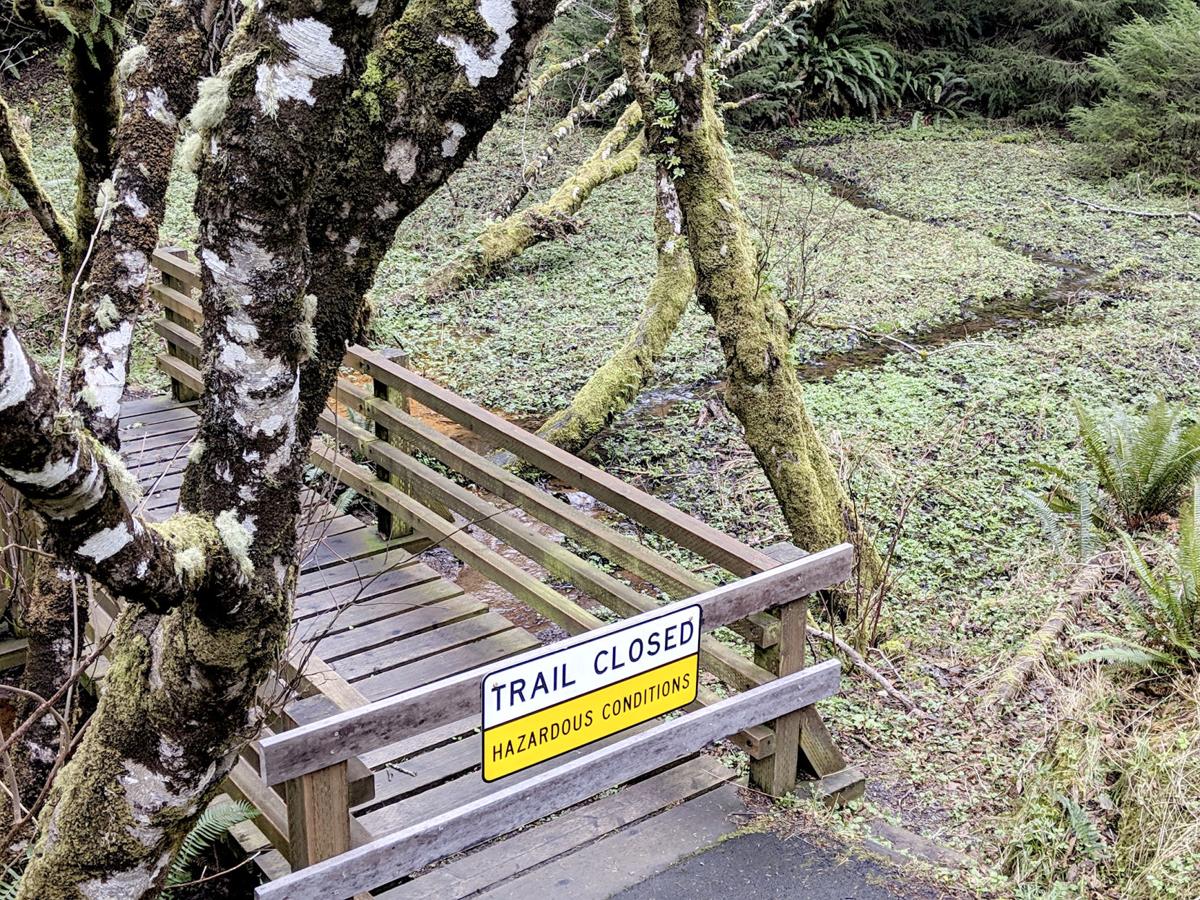 Signs at Ecola State Park warn visitors of hazards on the trail. 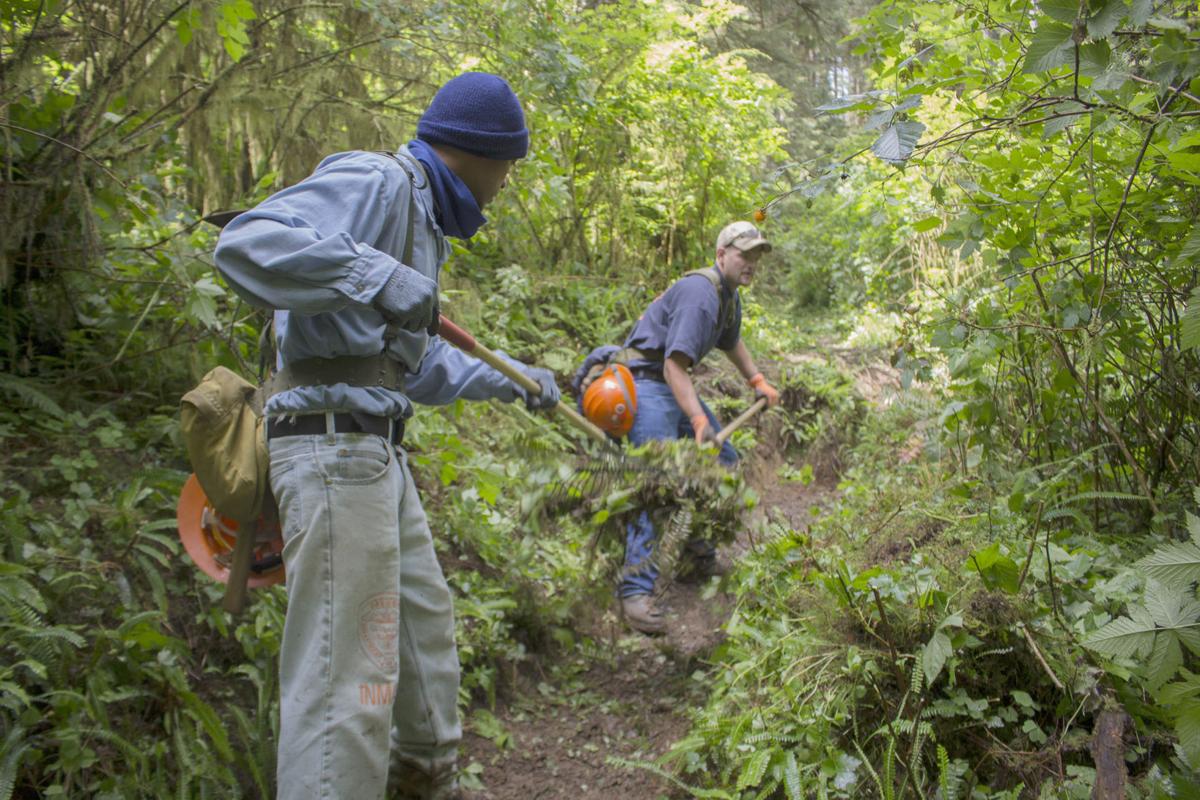 A 10-man crew from the South Fork Forest Camp chainsawed, mowed and raked its way over Tillamook Head, clearing the trail for the state Parks and Recreation Department in 2016.

Waves lash Hug Point on a stormy day. Hikers must keep track of tides when walking through this portion of the Oregon Coast Trail.

A section of the Oregon Coast Trail in Ecola State Park has been closed after a landslide washed it into the ocean.

Signs at Ecola State Park warn visitors of hazards on the trail.

A 10-man crew from the South Fork Forest Camp chainsawed, mowed and raked its way over Tillamook Head, clearing the trail for the state Parks and Recreation Department in 2016.

But though the trail was declared “hikeable” in 1988, hikers looking to walk it from end to end struggled to navigate gaps between segments and faced unclear signs, few legal camping options and, in general, a trail that wasn’t quite ready for them.

Now the state is looking for solutions.

This month, the Oregon Parks and Recreation Department held several open house presentations across the state to gather feedback from stakeholders about the trail. The outreach followed guidance established in a law passed by state Legislature in 2017 that requires the department to work with other state agencies, local governments, nonprofits and organizations to develop an action plan .

The effort builds on previous connection strategies, like a 2011 plan that identified 31 gaps in the trail that ranged from natural hazards like creek and river crossings to stretches where hikers have to hop onto highway shoulders to reach the next section.

Though the state has worked over the years to address the gaps, Robin Wilcox, a senior state parks and trails planner, estimates over 20 remain today. Some of them are more recent obstacles, like a landslide in Ecola State Park that sent a portion of the trail into the ocean.

There are other issues, as well, tied to changes in property ownership and questions about how best to maintain the trail’s different sections.

These types of challenges are common with any long trail system, said Chris Havel, the associate director for Oregon State Parks.

“That’s always the case with long trails,” he said. “You get the first 70 percent, 80 percent figured out ... but even portions of the Pacific Crest Trail went unresolved for decades.”

The Oregon Coast Trail runs for nearly 400 miles, though the actual distance can vary depending on how a person chooses to hike. The trail is not continuous, interrupted by highways, towns, property lines and the ocean. In some places, hikers must time their trek with the tides as the trail drops down from forested hills to sandy beaches, around rock outcroppings and back up again.

In fact, most people experience the trail through day hikes at state parks, perhaps not even realizing they are walking a piece of a much larger system.

“You know, honestly, I think one of the main challenges still is that people don’t even know the Oregon Coast Trail is a thing, that it exists and why it could be important for them,” Wilcox said in a presentation to state House lawmakers in May.

“That is an exciting opportunity.”

The state has identified five trail gaps in Clatsop County — two in 2011 and three more recently. They include Hug Point, where a rocky outcropping is impassable at high tide; Camp Rilea, where the trail, which runs along the beach, is closed periodically due to artillery training; and areas where the trail turns onto local roads and U.S. Highway 101.

One of the newer gaps emerged in 2016 after a landslide snipped a portion of the trail that runs between Indian Beach and Ecola Point in half.

Park staff had allowed hikers to walk the trail up to the landslide, but the entire section is now closed at the trailheads.

People were not honoring the closure at the landslide, said Ben Cox, park manager for the Nehalem Bay Management Unit. One person even tied a rope to a tree to help people navigate around the slide.

“It was to the point where people were going out and beyond the area closed and then we were getting complaints about the poor shape of the trail,” Cox said.

The state’s plans to address gaps in the Oregon Coast Trail will dovetail with work to reroute this section in Ecola State Park outside of the slide zone. Cox and his rangers examined a possible reroute in 2017. They had hoped to have a new trail available soon, but staff changes and other work delayed the project.

Since 2017, he and park staff have fielded questions from people looking to hike the entire Oregon Coast Trail. They encounter people who are using old information or tips gained from other hikers about where to camp — often in places where camping is not allowed.

But there are few options for hikers, Cox said. There are stretches between camping and lodging options that hikers just can’t make in a one-day trek.

As Wilcox and her team continue to look at how to improve the trail system, Cox anticipates conversations about where camping could be allowed might come up. For the section of the trail he oversees, he believes there could be an opportunity to work with cities and counties.

The state expects the work of identifying gaps along the Oregon Coast Trail, improving safety and connectivity, adding signs and looking at the trail as a whole will take several years.

Elsewhere, some cities are already in the middle of addressing some of the problems.

Manzanita landed a grant several years ago to build a trail connecting nearby Neahkahnie Mountain with the city, closing a gap identified in the 2011 plan. No access exists and hikers are forced to walk along the shoulder of Highway 101 to stay on the route.

In September, city leaders requested an extension of the state grant funding the work after unexpected changes — including a land transfer — delayed construction of the trail.

Neahkahnie is an important focal point for the community, Manzanita City Manager Cynthia Alamillo said. So besides improving the overall trail experience, she believes the connecting trail to Manzanita “will be a great amenity to our community.”