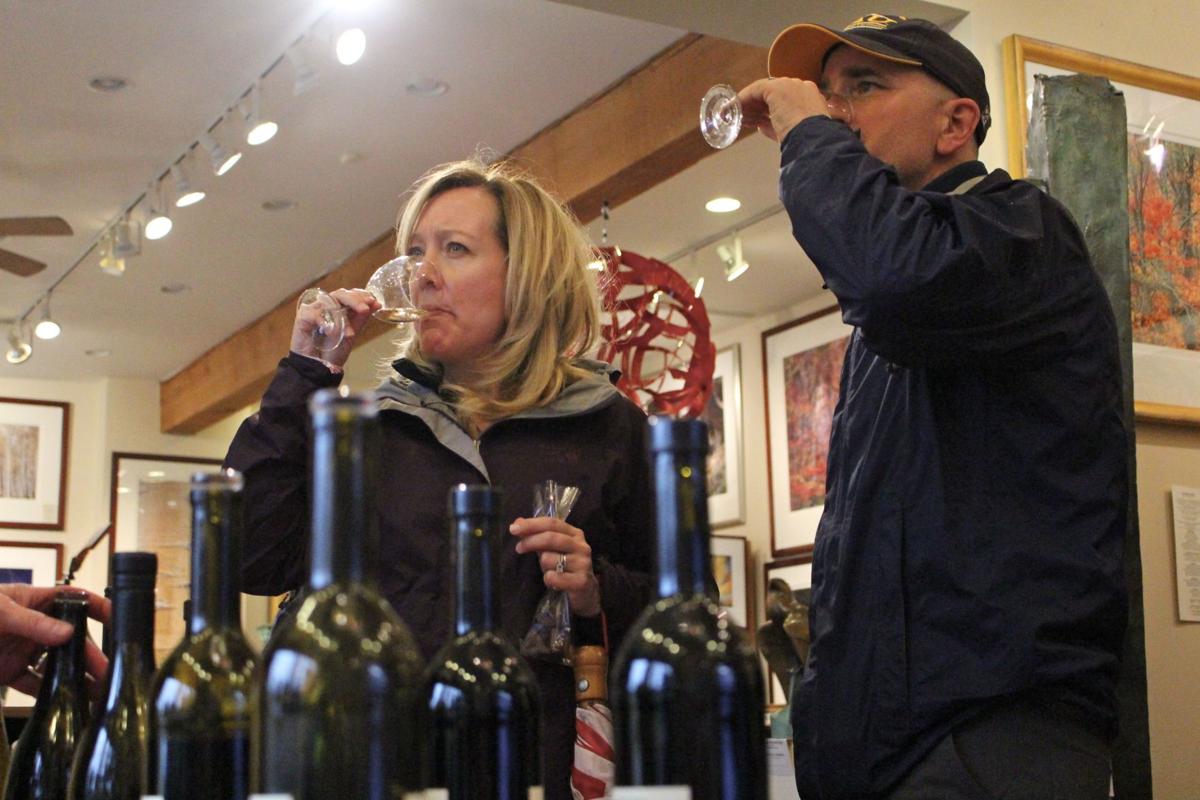 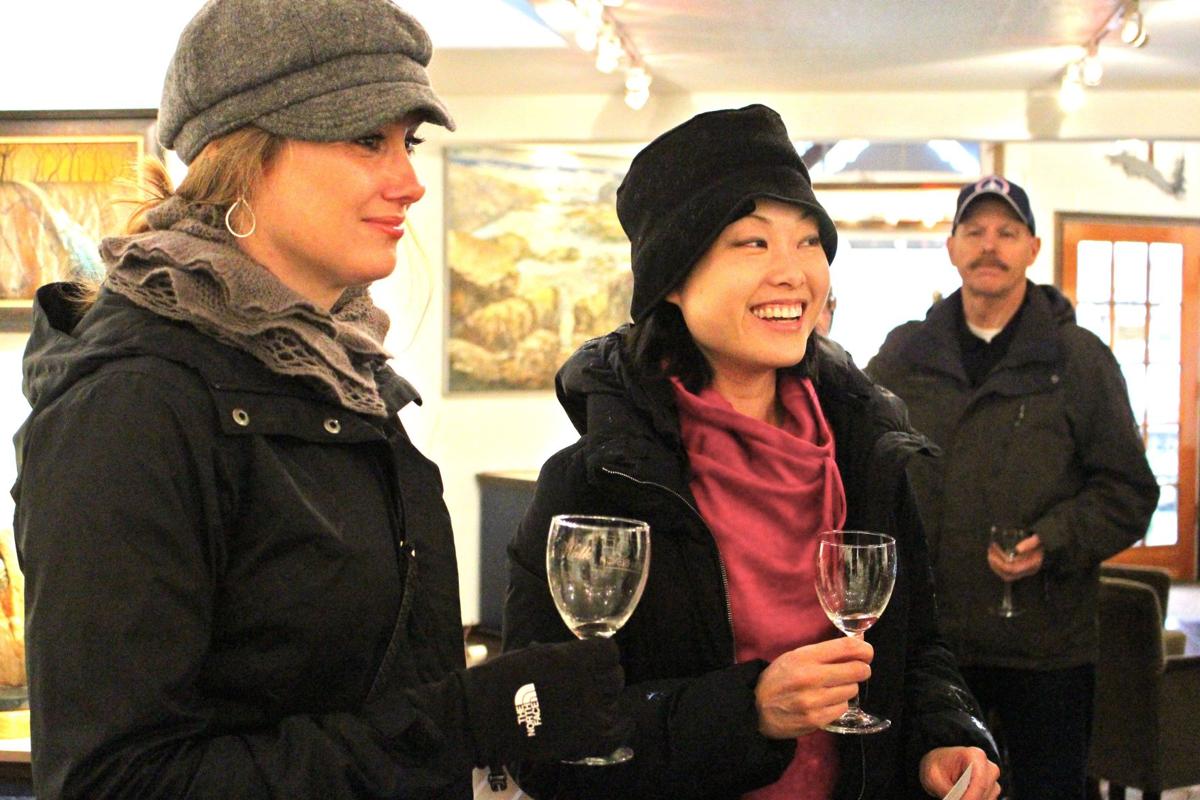 ERICK BENGEL PHOTO Erin Turner, left, of Portland, and Julie Hoffinger, center, enjoy their samples of wine from Elk Cove Vineyards at the Bronze Coast Gallery during the Wine Walk. The event is a fundraiser for the Cannon Beach Preschool & Children's Center. 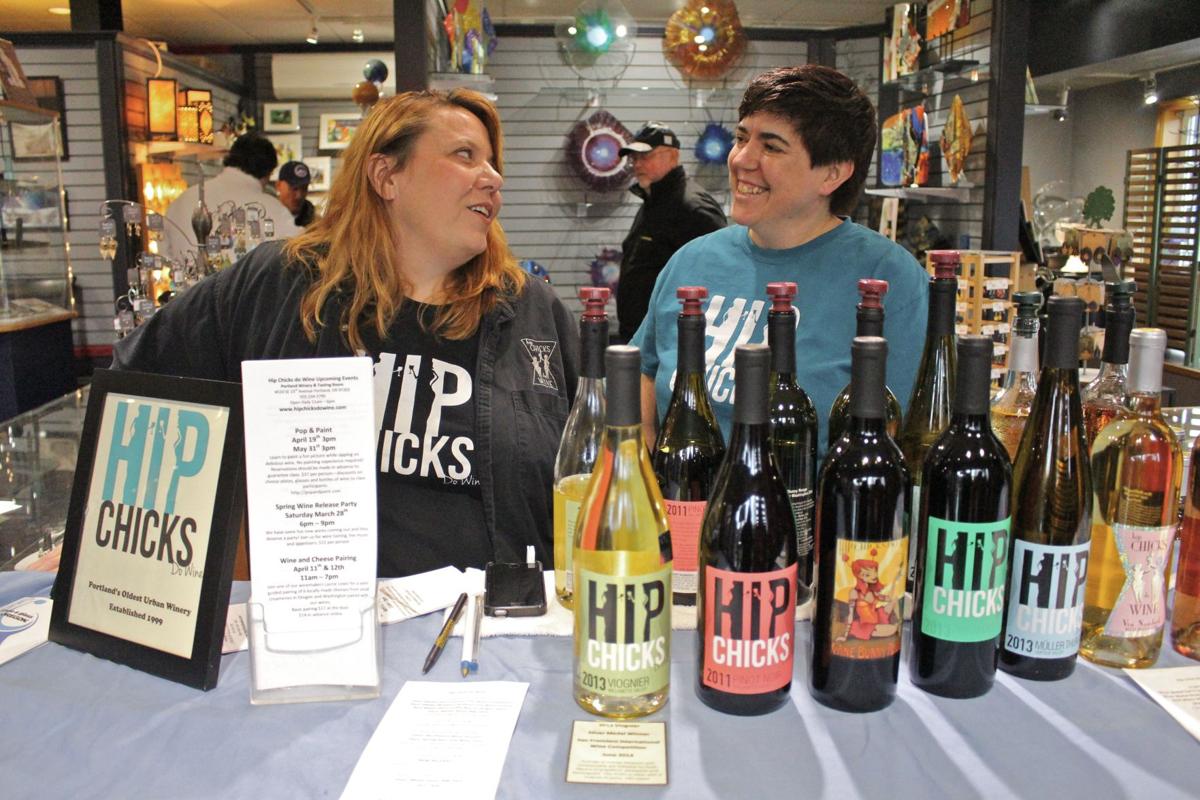 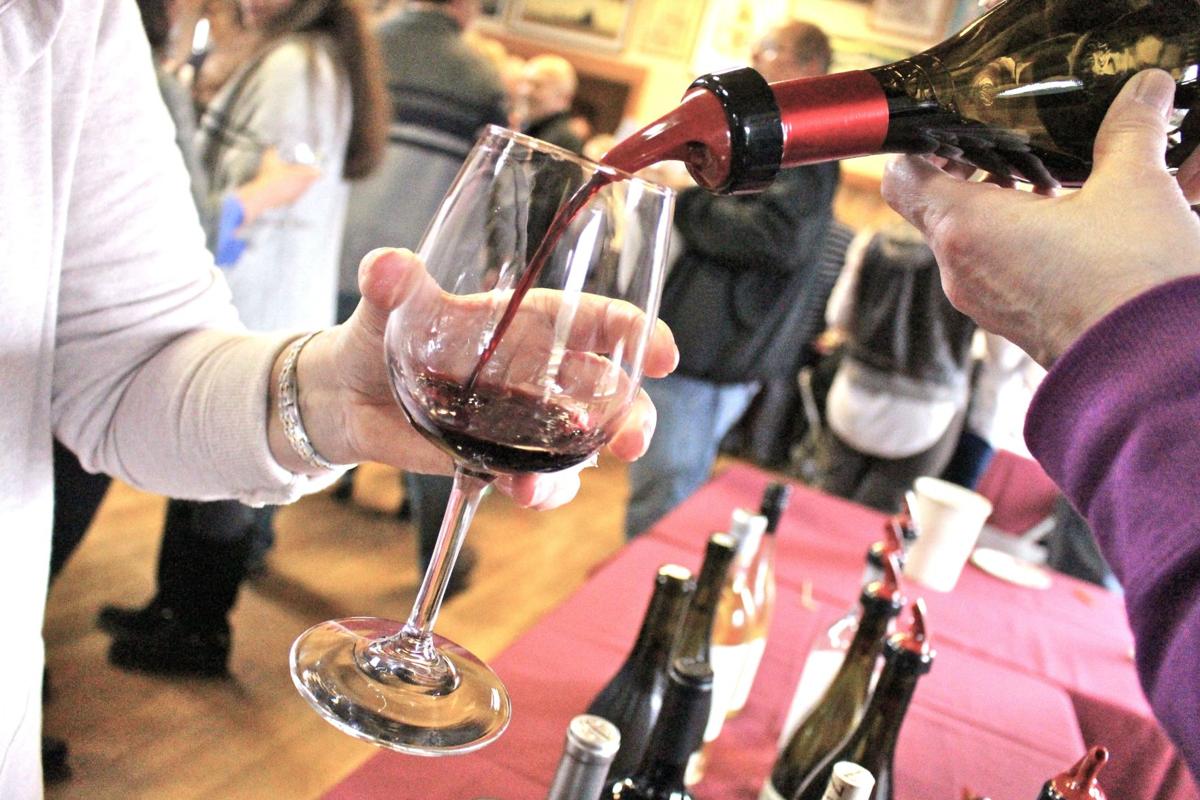 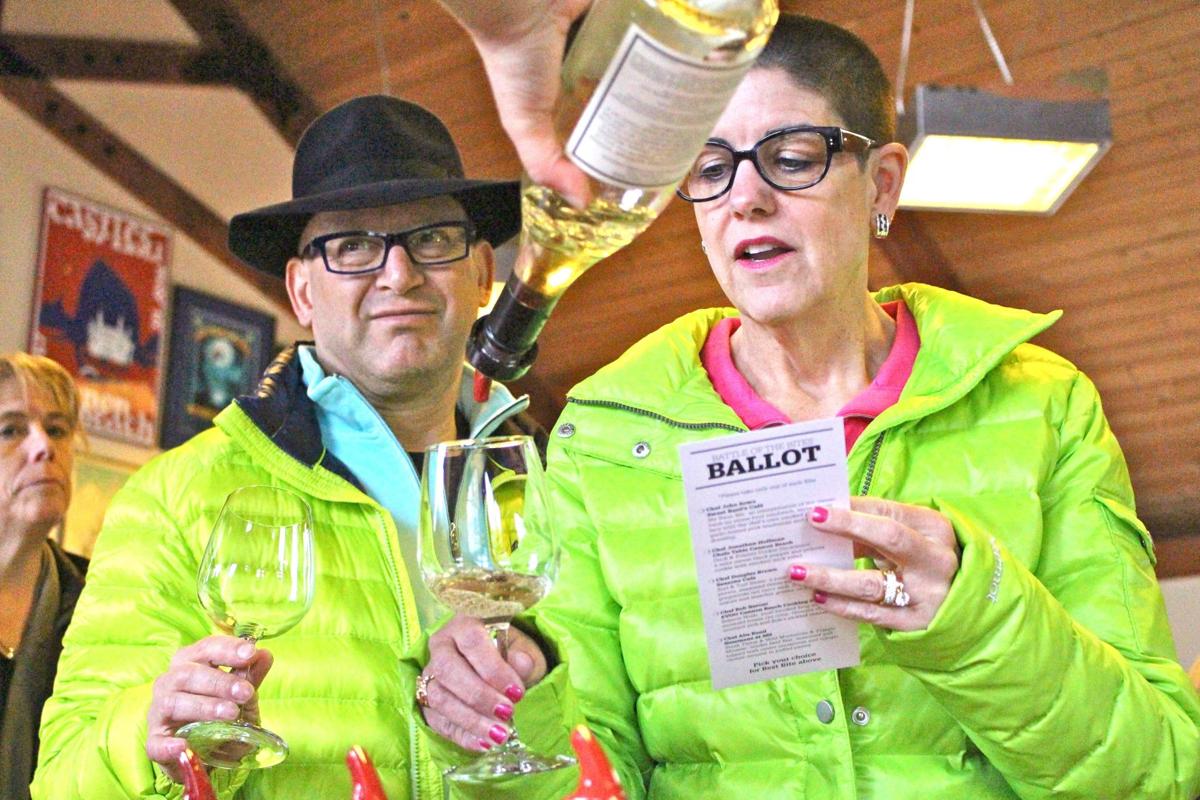 ERICK BENGEL PHOTO Elaina Calbaum, right, of Seattle, Wash., gets a pour of a white blend from Savor Cannon Beach volunteer Tracy Abel, while her husband, Steven Calbaum, left, waits his turn during the Battle of the Blends.

ERICK BENGEL PHOTO Erin Turner, left, of Portland, and Julie Hoffinger, center, enjoy their samples of wine from Elk Cove Vineyards at the Bronze Coast Gallery during the Wine Walk. The event is a fundraiser for the Cannon Beach Preschool & Children's Center.

ERICK BENGEL PHOTO Elaina Calbaum, right, of Seattle, Wash., gets a pour of a white blend from Savor Cannon Beach volunteer Tracy Abel, while her husband, Steven Calbaum, left, waits his turn during the Battle of the Blends.

Smith spied a middle-aged man strolling out of Dogs Allowed, a red blend sloshing around in his glass. Smith intercepted him.

“Excuse me! You’ve got to take your wine back inside,” she told him.

“Oh, I’m sorry. Not paying attention,” he said, downing the remainder rather than dump it into one of the buckets. “Thank you.”

His fellow wine walker, a woman, confided to Smith: “We’re in the third hour, I think, so ...”

Smith’s face went quizzical. The pair may have been in their “third hour,” yet the Wine Walk was only in its first hour.

“We don’t know what they did before they started, though, right?” she noted as they walked away.

Smith — one of 22 alcohol monitors stationed throughout town for the Wine Walk held March 14 — was volunteering her time for the Cannon Beach Preschool & Children’s Center. Smith, whose 6-year-old daughter, Gwen, used to attend the Children’s Center, sits on the board of directors.s

Originally a stand-alone event created as a fundraiser for the children’s center, the Wine Walk became incorporated into Savor Cannon Beach, a citywide wine and culinary festival, in 2010.

“I try to stand here and have a good attitude ... to add to the event instead of just standing here,” said Bisping, who, like other monitors, gave people directions and helped control the foot traffic, all while patrons streamed in and out of the establishments in a jovial bustle.

The Wine Walk, a sellout event for the last two years, raised about $13,500 for the children’s center, according to an early estimate by Gary Hayes, the event organizer and president of Explorer Media Group.

The total revenue for Savor Cannon Beach is excepted to meet the $75,415 expense budget, Hayes said. The budget included a $32,000 grant from the city’s Tourism and Arts Fund, which devotes a portion of the city’s lodging taxes to arts-related events intended to draw overnight visitors and/or tourists from more than 50 miles away.

He estimated that Savor Cannon Beach drew at least 700 people into town, and, based on information gathered through advance ticket sales, more than 90 percent of the festivalgoers made the 50-plus-mile journey specifically for the three-day festival.

As Hayes watched about 114 people file into the Cannon Beach Community Hall for the synchronized “Battle of the Blends” and “Battle of the Bites” competitions the evening of March 13, he quickly became aware of Savor Cannon Beach’s most conspicuous challenge at this point.

“We’re too popular, I think,” he said, adding that the event organizers are talking about moving the “battles” into a larger venue in 2016.

“As you can see, we can only hold so many people,” said Donna Beckwith, a fifth-year Savor volunteer, gesturing toward the mass of tasting, munching oenophiles filling out their ballots before “Battle” fatigue set in. “Obviously we can’t have any more (in the Community Hall).”

Savor Cannon Beach has evolved as its popularity has grown.

Combining “Battle the Blends,” a contest among four red and four white wines from the Pacific Northwest, with the brand new “Battle of the Bites,” a contest among five Cannon Beach chefs, is a “way to up the culinary factor for these events,” said Kristin Tschannen, events marketer for Explorer Media Group.

In this year’s “Battle of the Blends,” Bob Neroni, a chef at EVOO Cannon Beach Cooking School, won the red category with his 2012 Neroni Chef’s Red Blend. Alexandria Nicole Cellars, of Horse Heaven Hills, Wash., won the white category with their 2013 Shepherds Mark.

At the maiden “Battle of the Bites,” Douglas Brown, a Seasons Cafe’s chef, won with his Surf & Turf Slider.

On the previous night, the Washington wines cleaned up at the Thursday Night Throwdown, where participants tasted 12 wines of six varietals, one each from Oregon and Washington. Washington won in five out of the six varietal categories (though The Wine Shack’s Puffin Rose, served as an opener, got several write-in votes).

Laurie Barton, of Lake Oswego, remembers the early days when “you used to be able to walk right up and get a ticket the day of,” she said.

Not anymore. And people like her and her husband, Paul Barton, bear a not insignificant amount of the responsibility for Savor Cannon Beach’s success.

In the beginning, “we just stumbled across it,” she said. “And then we told all of our friends, and more friends.”

A good many people who make Savor Cannon Beach an annual tradition have gotten to know the town through the festival’s wine-tasting opportunities.

“Because of the way this event is set up, we go to a lot of the different businesses, the galleries and restaurants and hotels, and it’s just... really nice,” said Dana Carter, of Portland, who has been enjoying Savor Cannon Beach since 2011.

“There are worse problems to have than being sold out,” Hayes said.