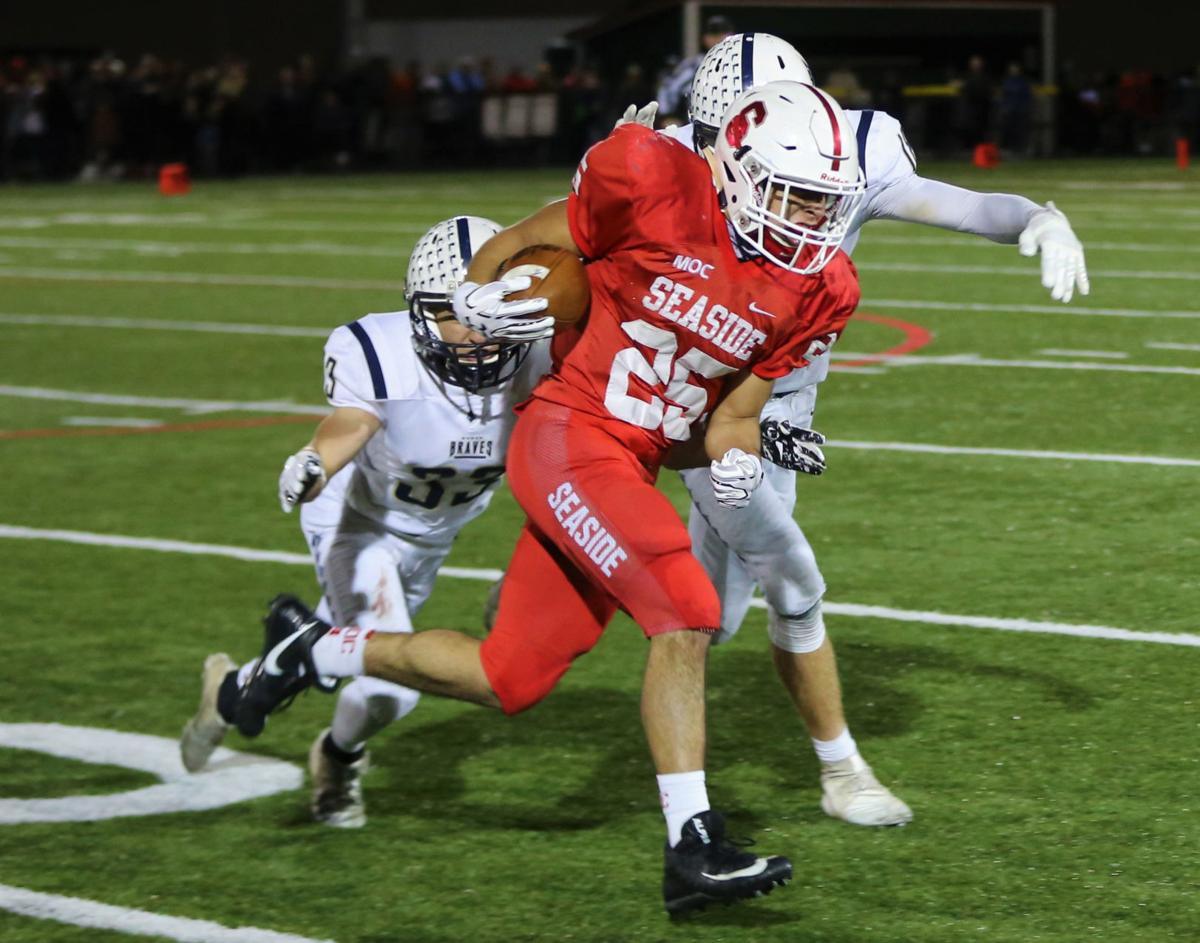 Seaside's Gio Ramirez grinds out some tough yards in Friday's game against Banks. 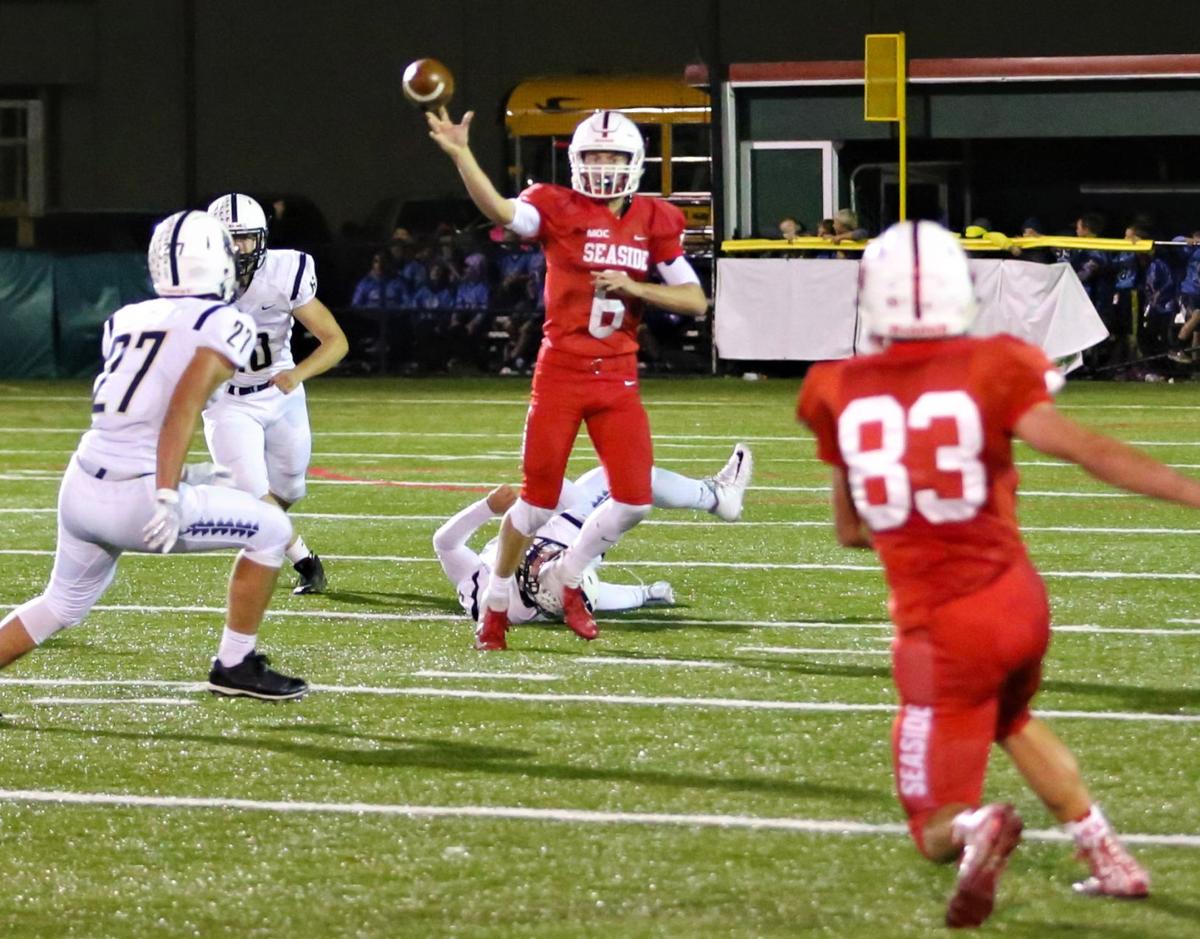 Under pressure all night, Seaside quarterback Payton Westerholm avoids the Banks' pass rush and completes a pass to Levi Card.

Seaside's Gio Ramirez grinds out some tough yards in Friday's game against Banks.

Under pressure all night, Seaside quarterback Payton Westerholm avoids the Banks' pass rush and completes a pass to Levi Card.

SEASIDE — Call it “The high school football Game of the Year, Part 1.”

With luck, Part II will be Nov. 24 in Hillsboro, between the same two teams. Because there’s every reason to believe that the Banks Braves and Seaside Gulls will meet again, on a much bigger stage.

The two best teams in 4A football put on a barn-burner Friday night at Broadway Field, where the No. 2-ranked Braves scored a thrilling 10-7 win over the No. 1-ranked Gulls in one of the biggest regular season showdowns in Cowapa League history.

The win guarantees Banks at least a share of the league title, but that’s about it.

Both teams remain ranked in the top two, both teams will be home throughout the playoffs, and odds are that one or both will be playing for a state championship in late November.

Banks coach “Cole (Linehan) and I talked before the game, and we still feel like we’re two of the better teams in the state,” said Seaside coach Jeff Roberts.

Besides, if the Gulls fulfill their destiny and win their first state title since 1994, they must lose at least one game.

“I reminded the kids tonight that in 1994, that team was 11-1,” Roberts said, with the only loss coming to Astoria. “So it’s not the end of the world. We’ll regroup and finish the season. I’m confident that we’ll be ranked in the first few spots. We’re in the playoffs, and that’s the bottom line.”

In a season full of lopsided scores and teams rolling up 60 to 70 points per game, Friday’s low-scoring, defensive battle was a nice change of pace for area high school football. Two great teams can indeed play a close game. Not even a partial power outage to the Broadway Field lights could stop it.

“It fit the billing,” Linehan said. “No. 1 versus No. 2. Seaside’s a great team. They’re so disciplined and they’ve got some great players. We knew it would be a great matchup.”

Likewise, Roberts said, “hats off to Banks. They played a heck of a football game. They were able to do some things to our offense that hasn’t happened to us.”

Mainly, they “limited” Seaside running back Alexander Teubner to 127 yards rushing and one touchdown. The Braves also held the state’s highest-scoring team scoreless through three quarters.

A 32-yard field goal by Banks’ kicker Jacob Slifka with 30 seconds left in the third quarter represented the game-winning points, while Seaside’s potential game-winning drive in the fourth ended at the Braves’ 9-yard line as time expired.

As for Slifka’s game-deciding kick, “We’ve been waiting for one of those for years,” Linehan said. “We’ve recruited soccer players in the past, but he’s a football guy. He’s an outside linebacker and a receiver, and he also kicks the heck out of the ball.”

The two teams couldn’t have been more evenly matched.

Seaside finished with 259 yards in total offense, to 227 for Banks. Both teams had 13 first downs, with no turnovers.

The Braves were the victims of a few key penalties — one of which wiped out a 67-yard punt return for a touchdown and another that erased a 40-yard run.

“We did not play a perfect game, by any means,” Linehan said. “I’ll have to watch the film and see what we can clean up.”

Meanwhile, Teubner’s longest carry of the first half was just 10 yards. Seaside had no first downs in the first quarter and just one in the third.

Teubner finally broke free for a 50-yard run early in the third quarter, but the Gulls were unable to capitalize.

“The plan was to take away Teubner,” Linehan said. “He’s having a great year, so we had to stop him.”

Seaside’s Wing-T offense is “something you have to start prepping for early,” he said. “You can’t simulate it in practice. We knew this game was coming, and it just so happens that we have two Wing-T’s back-to-back with Molalla (this) week. It’s very fitting that our defense played so hard all night. It was their opportunity to win it for us.”

Four of Seaside’s first five drives ended with punts, and the Gulls were stuffed on a fake punt run on the other.

The Gulls had just three offensive possessions in the second half, and they scored on their second, a 13-play, 63-yard drive highlighted by a 21-yard carry from Payton Westerholm on a fourth down play. Teubner capped the drive with a 6-yard scoring run.

Trying to run out the clock on the ensuing drive, Banks went for it on a fourth-and-two, only to have Seaside’s Travis Fenton tackle Blake Markham for a 10-yard loss.

Seaside took over at its own 44 with 1:40 left, and following Westerholm passes to Duncan Thompson and Teubner, and a 16-yard run by Westerholm, the Gulls had a first down at the Braves’ 10-yard line with 36 seconds remaining.

Two penalties pushed the Gulls back to the 26, and Westerholm’s pass to Teubner was the final play, with Teubner tackled at the 9-yard line as time ran out.

“We haven’t really had to run the two-minute drill this year,” Roberts said. “They put a lot of pressure on us, and we didn’t do a very good job of picking that up. We’ll watch the tape, clean it up and fix it. They stopped ‘Teub’ tonight.”

Martial Stegemeier had the Braves’ only touchdown, a 1-yard run in the first quarter.

It was just the first of many Banks vs. Seaside battles that will continue into basketball and baseball.

“These kids have been playing against each for so long, I think Seaside and Banks have a lot of respect for each other,” Linehan said. “It’s just fun to get out here and have a game like this. They treat us each other like that in every sport.”