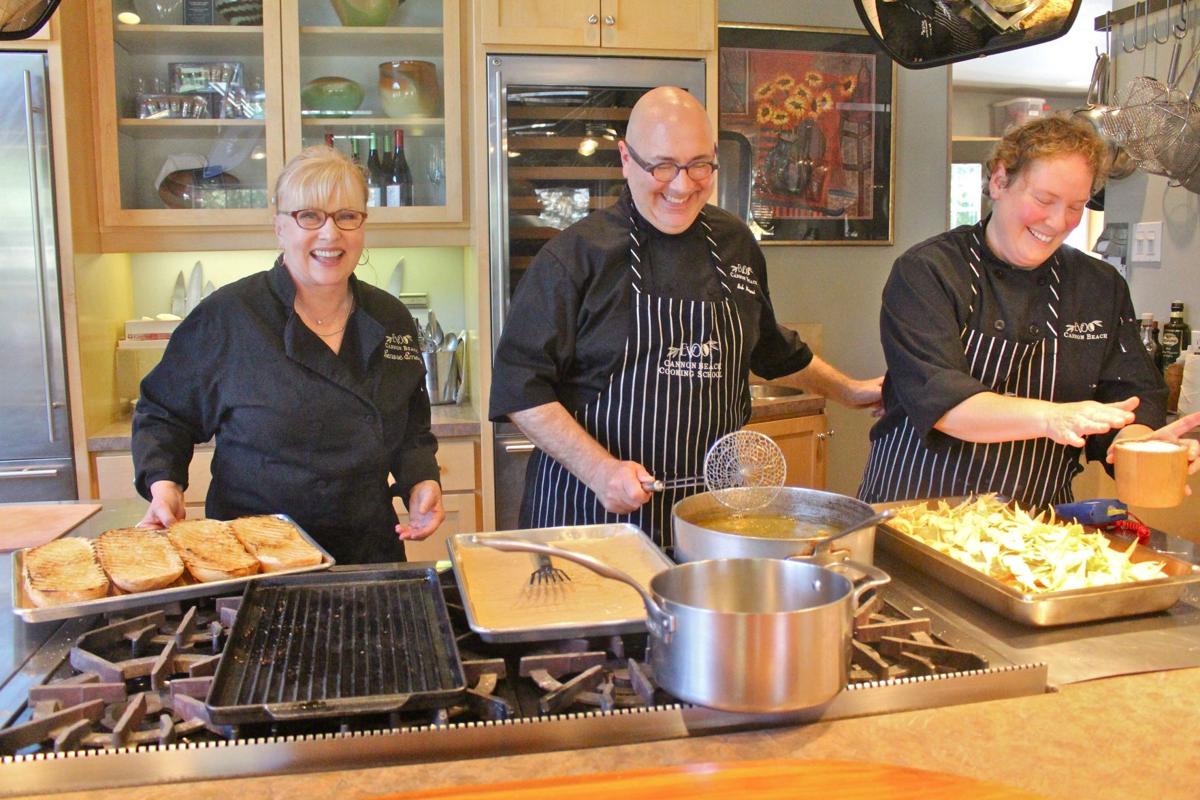 Lenore Neroni, left, and Bob Neroni, center, get the food ready for a dinner show with their summer intern Heather Mondini. 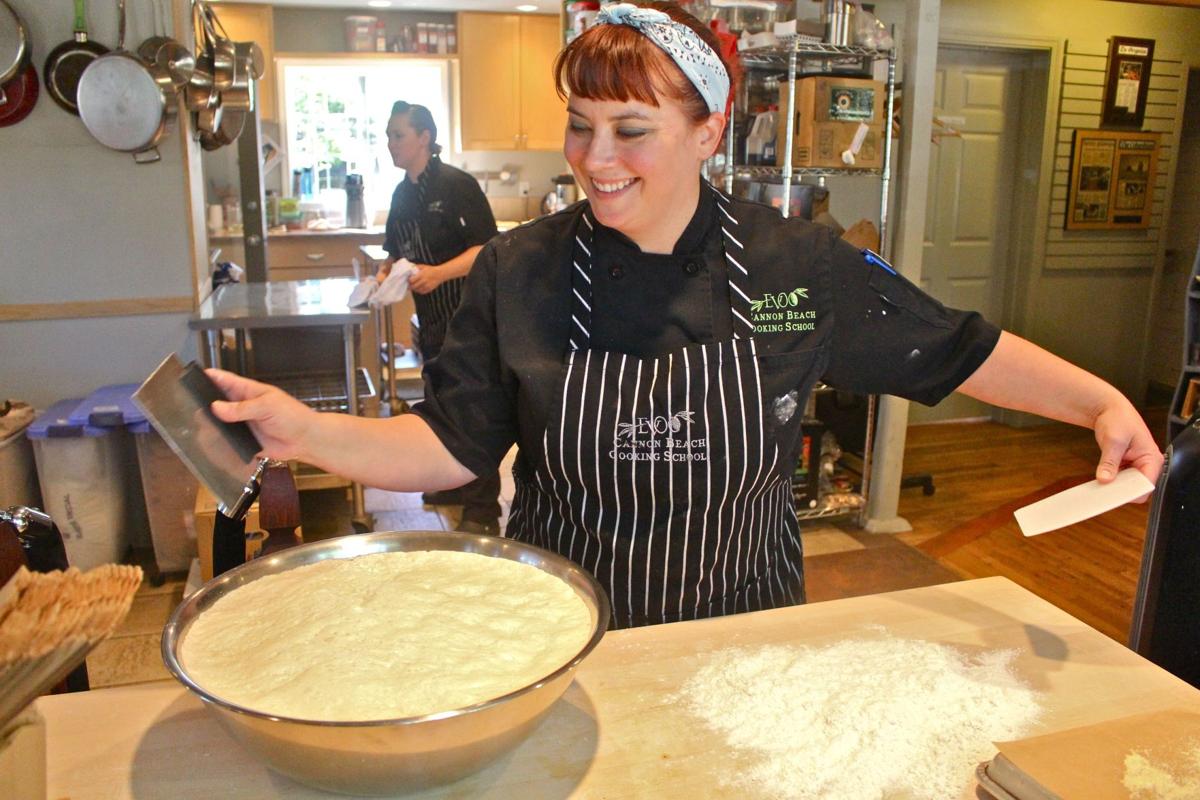 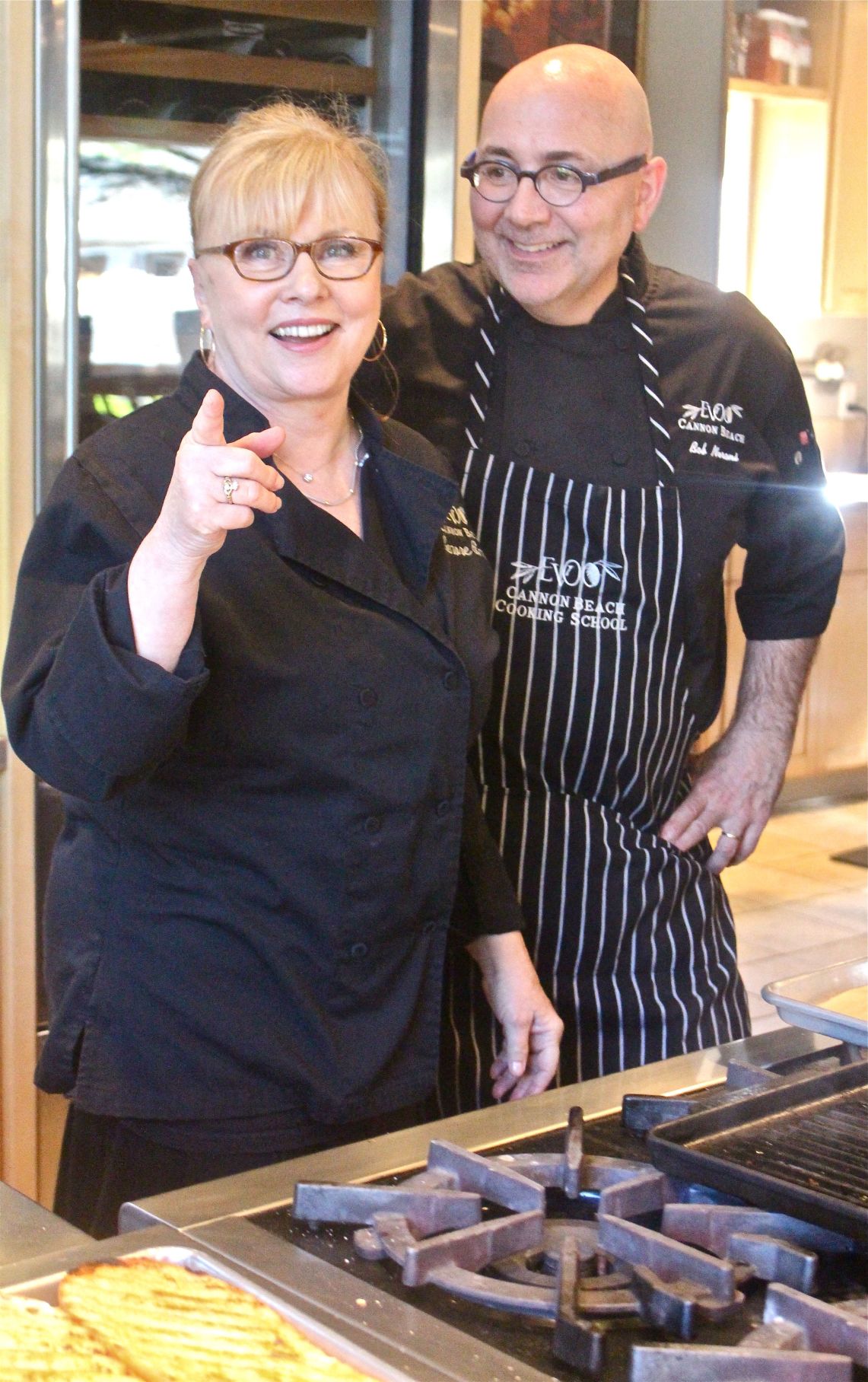 Lenore Neroni and her husband, Bob Neroni, get used to the camera in their kitchen at EVOO Cannon Beach Cooking School, which celebrates its 10th anniversary Aug. 14.

Lenore Neroni, left, and Bob Neroni, center, get the food ready for a dinner show with their summer intern Heather Mondini.

Lenore Neroni and her husband, Bob Neroni, get used to the camera in their kitchen at EVOO Cannon Beach Cooking School, which celebrates its 10th anniversary Aug. 14.

And its co-owners, Bob and Lenore Neroni, have found different ways of measuring this milestone.

Bob Neroni “went back and counted them twice, because he said, ‘Nah, that can’t be right,’” Lenore Neroni said. But right they were.

“That’s overwhelming for the average cook ... Do you know how hard it is to give a dinner party?” she said. “I mean, most people would rather spend the money to take people out ... than to make a dinner party at home.”

They can only begin to estimate how many customers that amounts to, let alone how many pounds of garlic, grinds of coriander seeds and bottles of extra virgin olive oil (EVOO’s namesake ingredient).

“We probably have 50 percent or more returning customers,” she said. “We’re very lucky.”

The Neronis have scheduled a three-day birthday bash that hearkens back to their grand opening on Aug. 14, 2004.

On Aug. 14 and 15, EVOO will hold a dinner show with guest chef John Sarich, the culinary director at Chateau Ste. Michelle, the oldest winery in Washington, near Seattle.

Sarich cooked for EVOO’s opening night, while the Neronis were still hanging their cupboards, and spotlighted the event in his show “Best of Taste: Flavors of the Pacific Coast.”

Then, on the 16th, the Neronis will hold a special dinner accompanied by a jazz combo for 45 of their loyal Encore Club members. Some of EVOO’s former interns from the last decade will help Bob Neroni cook small plates of grilled food.

“We do a dance here every night,” she said. “It takes ballet movements sometimes.”

Bob and Lenore have been together for 27 years. “Our entire life together, we thought we would do a restaurant,” Bob Neroni said.

But, during the pre-EVOO decade, while living and working in major cities like Washington, D.C. and Seattle, the Neronis kept finding that commercial property was too pricey.

Their corporate backgrounds had taught them that “restaurants are such an iffy proposition, and if you don’t own property, it’s even iffier because you have nothing to fall back on,” he said. “Certainly banks like you better if there’s property involved.”

For a time, they gave up on their dream, believing it was just too expensive.

In 2003, while living in Seattle and vacationing in Cannon Beach, they took the money they had saved to buy a restaurant and built a beach getaway for themselves.

One Saturday morning, they heard a knock at the door of their beach house. It was a local property owner.

“And he said, ‘I hear you’re a chef. I’ve got a space. Come open a restaurant,’” Bob Neroni said. “It was really that surreal.”

The Neronis had their doubts. After all, their hearts were set on owning a space, not leasing one.

As they were preparing to abandon their dream one final time, an offer on the building fell through.

“So we jumped on it, and they accepted our offer,” he said.

With their location secure, all the Neronis had to do now was figure out what to do with it.

“We’d already gone away from the restaurant and more into the cooking school idea,” Bob Neroni said.

He had been a chef at large hotels and resorts his entire professional life, and Lenore had taught culinary school on the East Coast.

“Teaching and training is part of what we all do to give back,” he said.

And since there wasn’t a kitchen shop in town, they decided to merge the retail, the restaurant, the cooking school, the membership, a catering service and EVOO-brand products (which now include spices, wines and a sea salt) into a single venture.

“From a business standpoint, it makes much more sense” to diversify their portfolio, as it were, rather than to rely on only one or two revenue streams. “It’s all within our wheelhouse,” he said.

Bob Neroni still considers EVOO to be in its “humble beginnings” stage. “We’re still a small husband-and-wife team” who has a “great staff.”

EVOO’s menu is constantly evolving, sometimes changing as often as twice a week. And the Neronis’ reliance on local, organic foods harvested from sustainable farming practices has a lot to do with that.

“Because I’m definitely a locavore, as something goes out of season or isn’t available, that has a ripple effect on the entire menu,” Bob Neroni said. “I don’t just replace one fish with another — that changes the dish. And if one dish is changed, it doesn’t really flow into the other two, so now those two change.”

“I love the creativity of being able to do something different every month,” said Kate Bestgen, an EVOO employee who started out as an intern in 2012. “We’re always thinking about it ... the next thing that we’re going to do. That’s the definition, I think, of a true foodie.”

For every dinner show, the EVOO staff prepares the evening meals from scratch. To watch the feast come together on a plate at the end of the day is rewarding.

“It’s this artistic, beautiful thing, and you’re like, ‘I did all of that,’” she said, tears welling in her eyes. “I don’t think people necessarily know how much love and effort it takes to do this.”

The Neronis have no secret recipes; all of them are available on the EVOO website.

“It makes me happy when people think that they can do some of what we do,” Lenore Neroni said. “We make it approachable.”

‘We do a dance here every night’