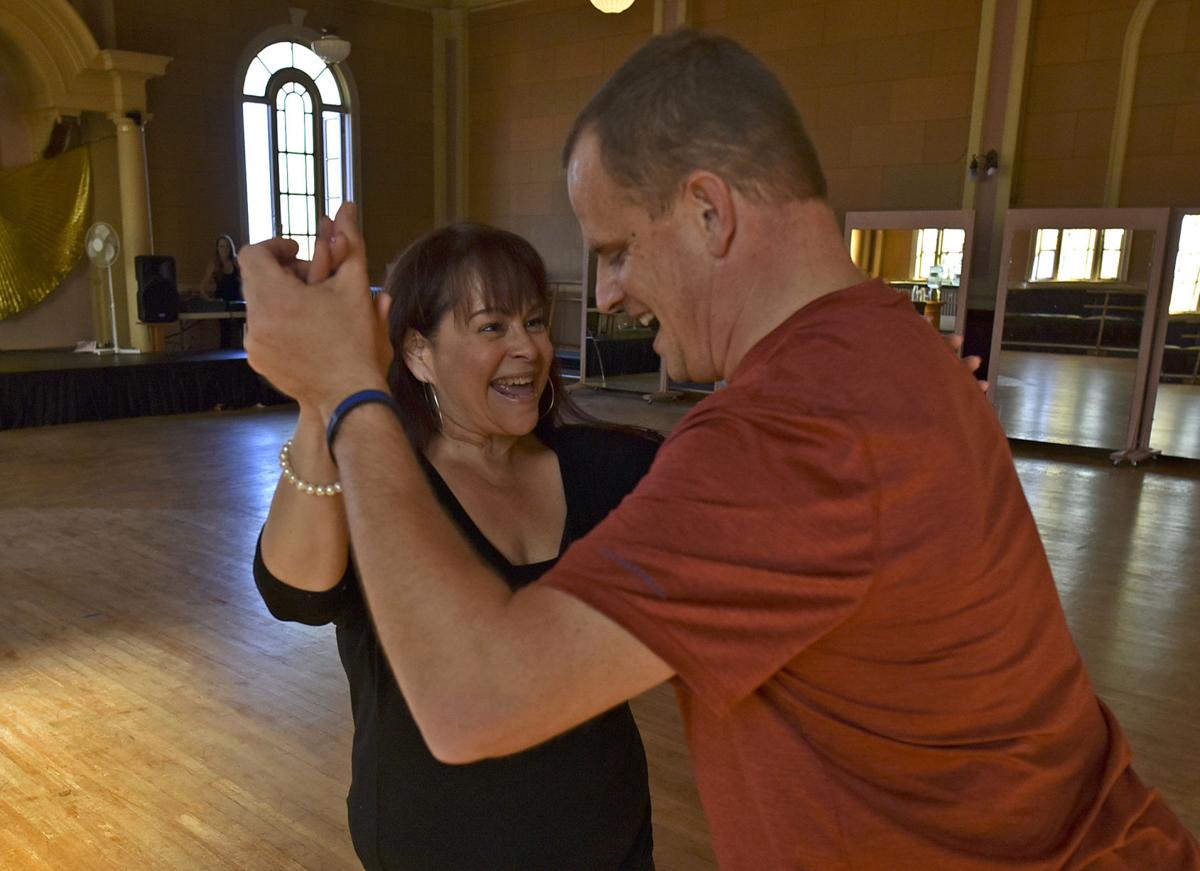 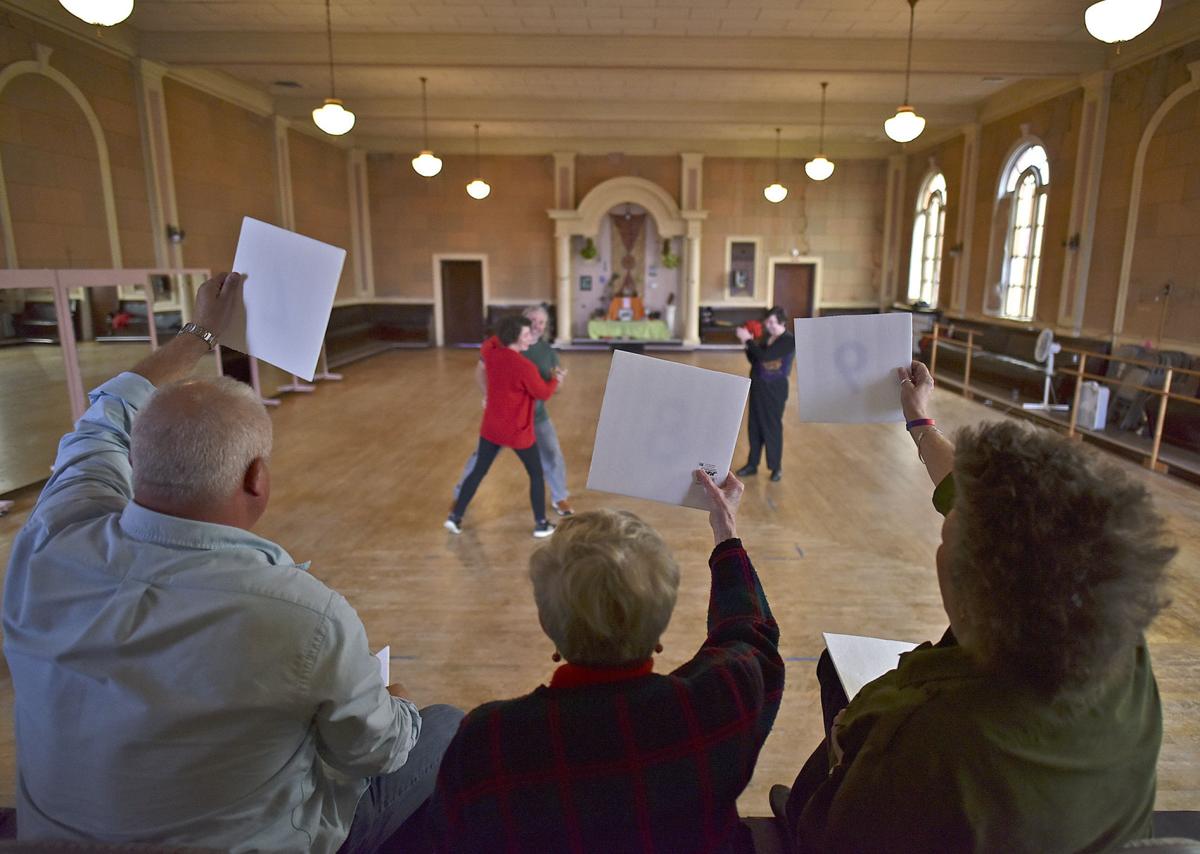 From left: Dane Gouge, Arline LaMear and Dida DeAngelis hold up score cards during a rehearsal of Dancing with the Clatsop County Stars. 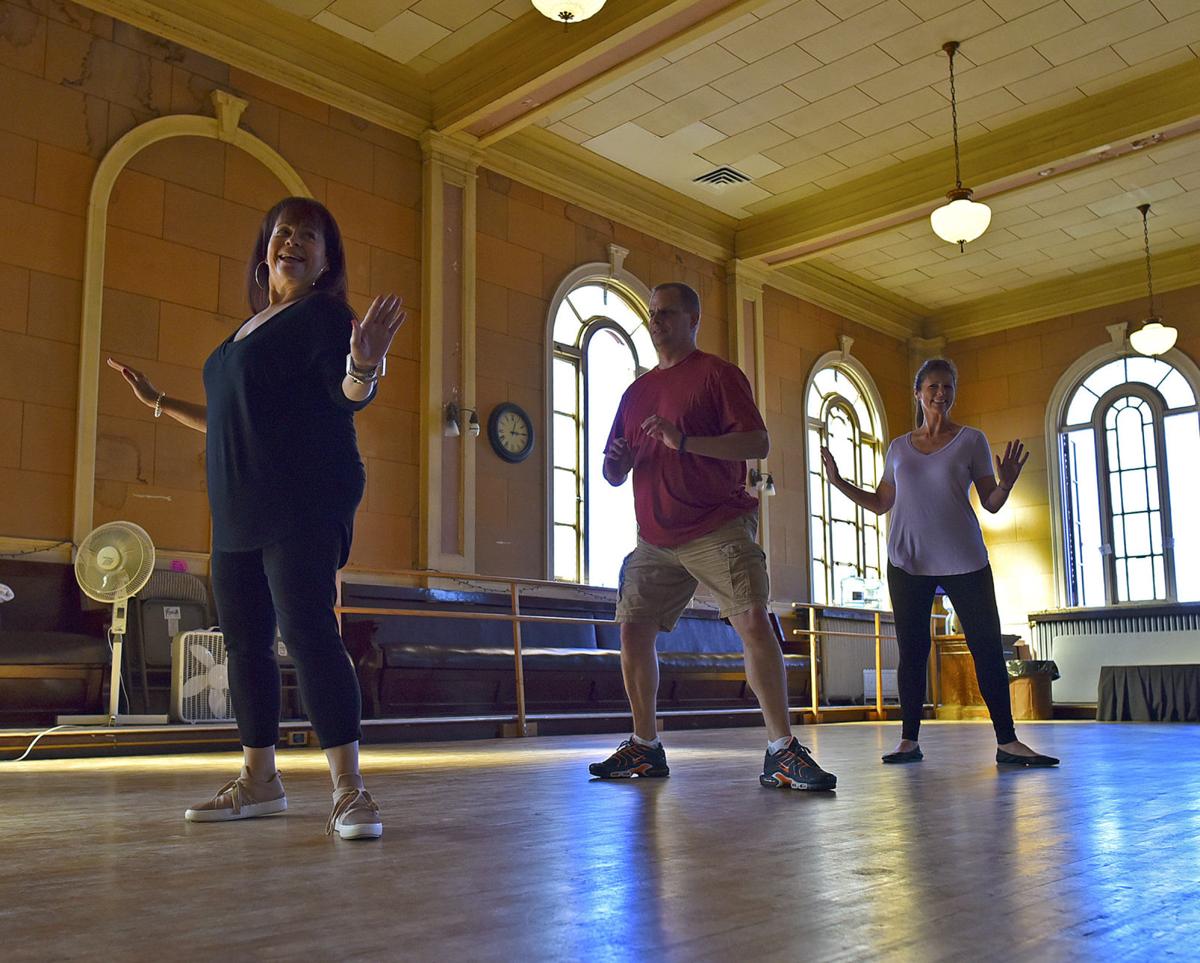 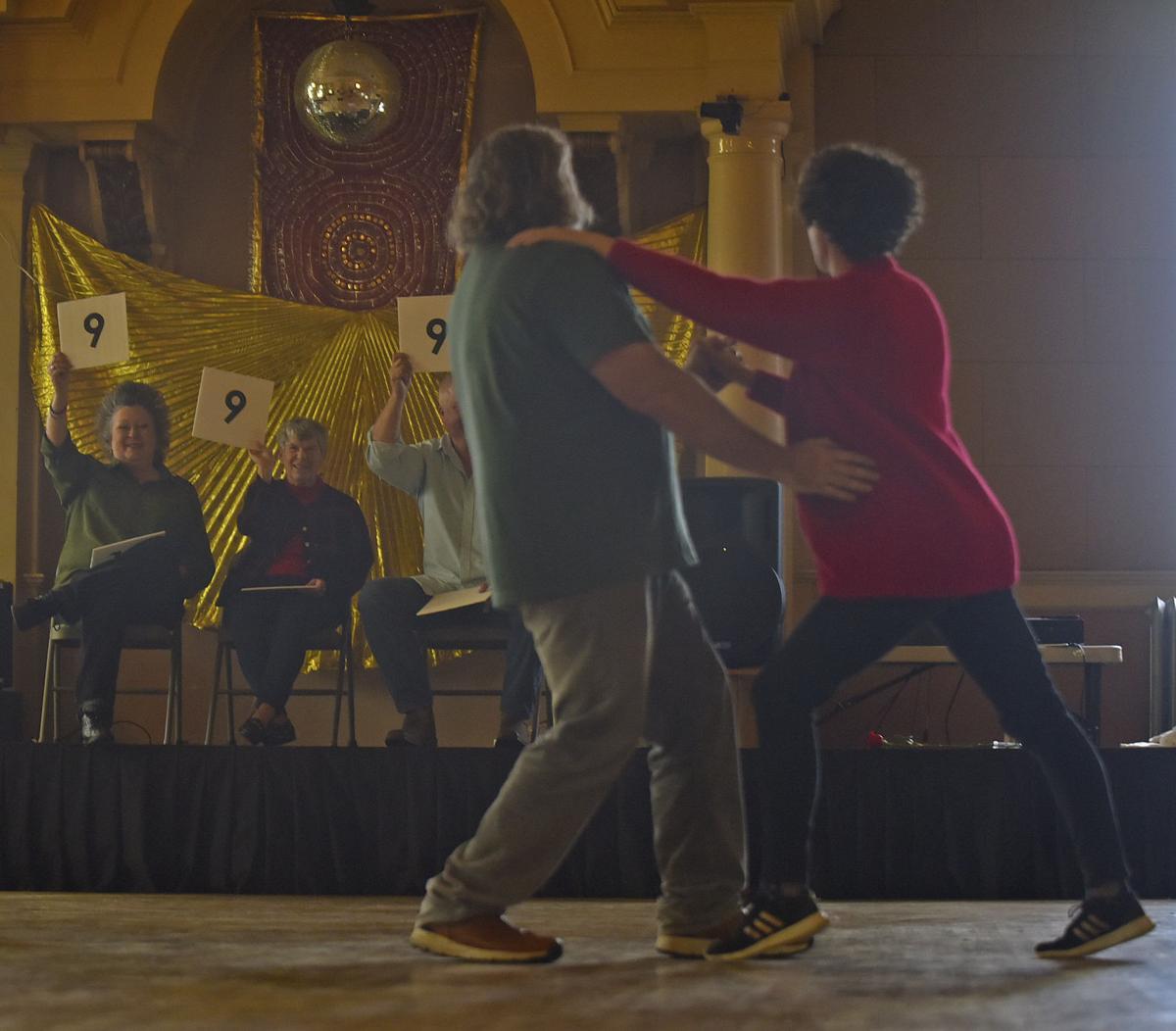 Dancers get their scores from the judges during a Dancing with the Clatsop County Stars rehearsal. 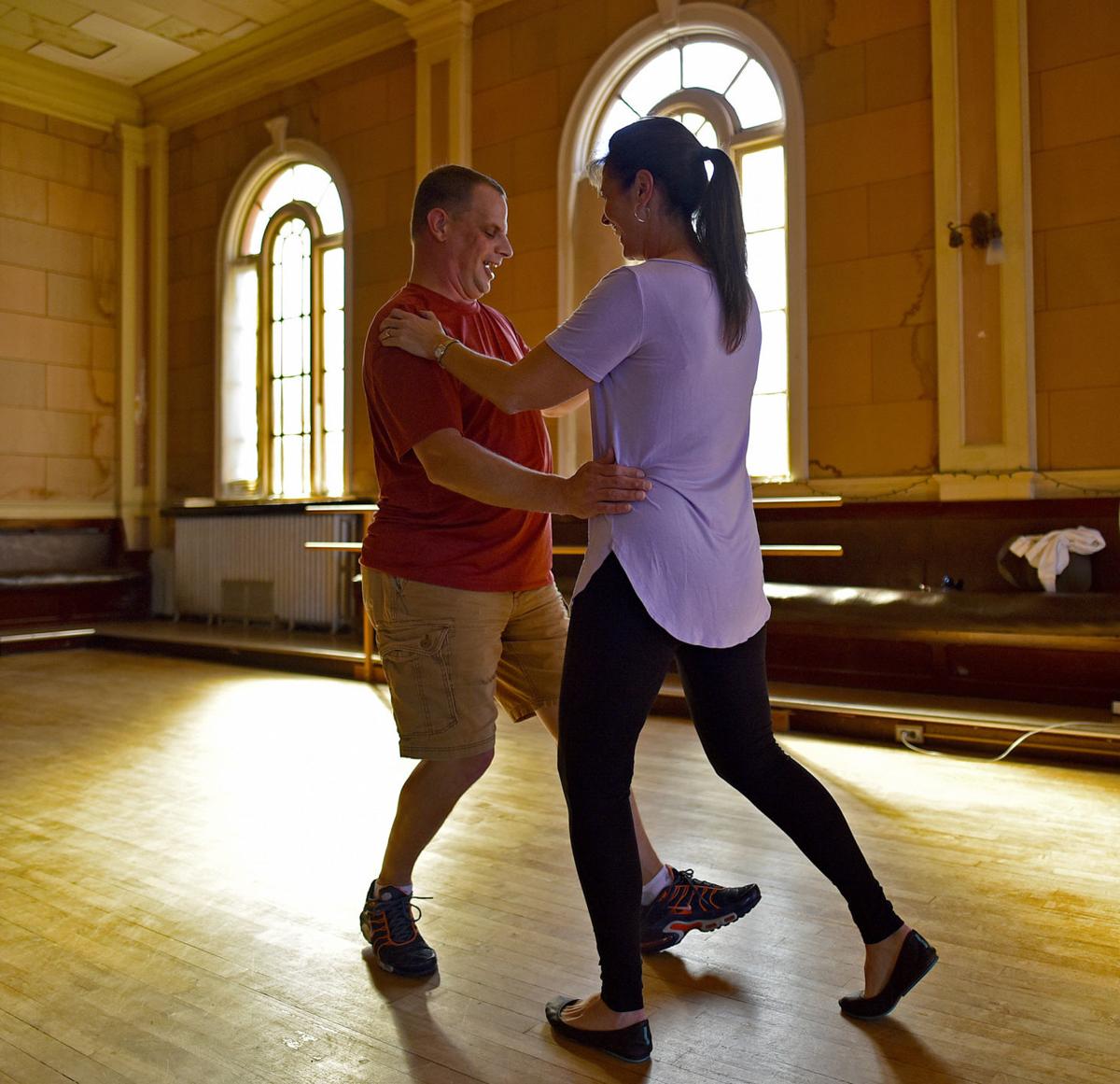 Jason Schermerhorn and Julie Fluse practice for an upcoming Dancing with the Clatsop County Stars performance.

From left: Dane Gouge, Arline LaMear and Dida DeAngelis hold up score cards during a rehearsal of Dancing with the Clatsop County Stars.

Dancers get their scores from the judges during a Dancing with the Clatsop County Stars rehearsal.

Jason Schermerhorn and Julie Fluse practice for an upcoming Dancing with the Clatsop County Stars performance.

What do a police chief, a community college president and a high school athletic director have in common?

On the evening of Thursday, Oct. 18, these three local celebrities, plus five others, will dance with professionals from the Utah Ballroom Dance Company at Astoria’s Liberty Theatre in hopes of claiming the Mirror Ball Trophy.

The event with an opening Latin dance number to be performed by a group of local children. The first half of the show will feature the local celebrities performing with their professional partners. The audience can then cast votes, and while those are counted, the professionals will put on a showcase.

Though they’re competing in the inaugural Dancing with the Clatsop County Stars fundraiser, none of the participants are passionate about competitive dancing per se. They are, however, strong supporters of the event host, The Harbor, a community agency that provides intervention, recovery and advocacy to survivors of domestic violence, sexual assault and stalking.

“I love The Harbor, and I’d do anything to support them,” said Cannon Beach Police Chief Jason Schermerhorn, who served on the nonprofit’s board for three years.

His initial response when asked to dance was fear, but “I couldn’t say ‘no,’” he added.

“It represents what we stand for at The Harbor: trying to connect people with lots of different resources,” she said.

Much like on the ABC TV series “Dancing with the Stars,” each local celebrity will learn a routine with a professional dancer, practicing from Oct. 14 until the night of the event.

Astoria Mayor Arline LaMear, along with Astoria Pride Co-Chair Dida DeAngelis and Astoria Ford owner Dane Gouge, will be guest judges, providing commentary throughout the performance. The winner will be chosen through an audience voting process.

The Utah Ballroom Dance Company frequently partners with nonprofits to put on this kind of fundraiser. When they reached out to Clatsop County organizations, The Harbor jumped on the opportunity.

Hernandez, who serves on several boards and is heavily involved in various fundraisers, feels that, especially for The Harbor, it’s “good to do something that is not too somber,” but creates space for happiness, hope and taking “a little vacation” from issues that are important but can be emotionally draining.

As for the dancing, she isn’t worried about her routine being perfect or tripping and falling, since the competitors are friends, neighbors and coworkers.

“We’re just being silly with our friends for a great cause” — although she has jokingly warned her fellow competitors she may “go Tonya Harding on all of them.”

Proceeds will support The Harbor in providing survivor services and maintaining their confidential emergency shelter, which was recently reopened in June.

While raising money, the event also will heighten awareness about domestic violence and sexual assault. From a law enforcement perspective, Schermerhorn said, The Harbor is “a great resource and asset” when it comes to providing advocacy and trauma-informed care for survivors.

“They give that voice to the victim,” he said. “These advocates help them to get resources and safety and security for their families to protect them. I think that’s invaluable in our society.”

Dancing with the Clatsop County Stars

Tickets: $15 to $35, with tiered seating, available at Liberty Box Office or on theater’s website