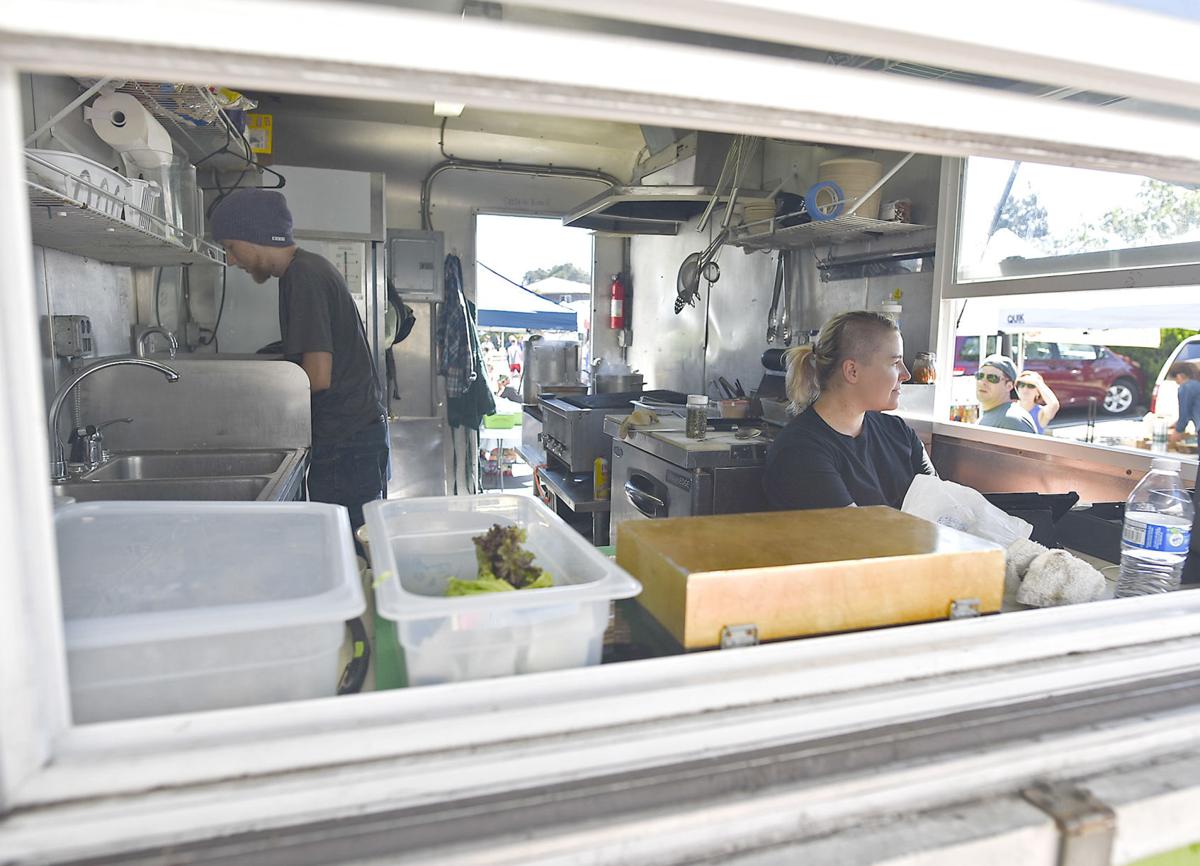 Vendors at a food truck await customers at the Cannon Beach Farmer’s Market in 2017. 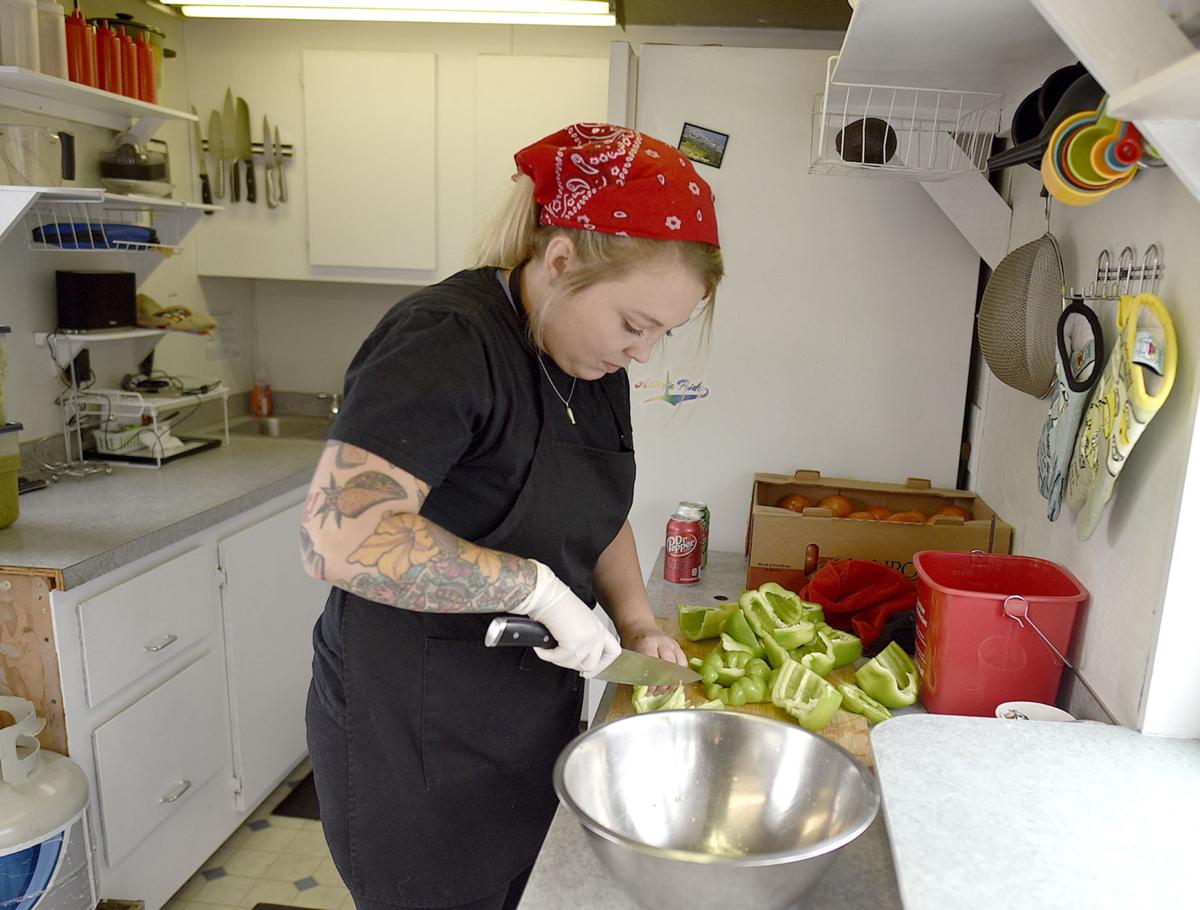 Alec Evans chops vegetables in her food truck in Astoria prior to opening for business in August. She has since moved her operation out of state.

Vendors at a food truck await customers at the Cannon Beach Farmer’s Market in 2017.

Alec Evans chops vegetables in her food truck in Astoria prior to opening for business in August. She has since moved her operation out of state.

Mike Selberg wants to be able to serve cocktails with the spirits he creates at the Cannon Beach Distillery.

In order to do so, Selberg would have to have a kitchen that satisfies Oregon Liquor Control Commission standards — a costly renovation. Instead, he would like to bring in a food truck for his parking lot, which would satisfy the kitchen requirement and offer a new food option in town.

But there is no way to do that legally in Cannon Beach, which generally prohibits food trucks outside of the weekly farmer’s market.

For years, cities like Astoria and Portland have courted the food truck movement. But smaller communities like Cannon Beach and Seaside are beginning to question whether food trucks should be part of their culinary scenes.

A large sector of the local restaurant industry objects to food trucks, seeing them as an unfair form of competition and out of step with community character. Many business owners in these tourism-dependent towns say they are already struggling to make enough money in the busy season to carry them through the year.

But others see food trucks as a way to usher in more diverse food options and opportunities for a younger generation of business owners, and believe cities should get ahead on writing codes that adapt to a growing trend in a way that will limit their community impact.

In November, more than 25 Cannon Beach businesses that offer food met to give major feedback on the subject, mostly in opposition.

The potential for food trucks to take up parking spaces that are already at a premium was a major issue. Many also claimed it wasn’t fair to allow new businesses that wouldn’t have to pay the same kind of rents and property taxes as brick-and-mortar businesses — a problem especially dramatic along the downtown core, where property values are high.

“I’ve been closed for over a month and a half because of staffing shortages ... losing thousands of dollars, and then I’m hearing this?” said John Sowa, of Sweet Basil’s Cafe. “It raises the hair on the back of my neck.”

Cannon Beach and Seaside share similar fears that the small towns have restaurant markets that are already spread too thin, with 44 food establishments in Cannon Beach and 75 in Seaside.

“I would suggest to this body that the restaurant pool in the city is stretched pretty far,” Doug Wiese, of Dooger’s Seafood, said at a July work session. “Every person that stops in there and eats is one more meal that does not get taken sitting down in one of our restaurants.”

The relationship between food trucks and brick-and-mortar restaurants doesn’t have be adversarial, said David Reid, the executive director of the Astoria-Warrenton Area Chamber of Commerce.

“I think the food trucks came in and filled a void that existed: the quick lunch meal,” Reid said. “Initially, it didn’t feel like it was taking from competitors — it was filling an additional need.”

Seaside City Councilor Seth Morrisey feels this pattern could be the case in Seaside, too. Morrisey plans to introduce a new ordinance that would allow food carts to operate only on private property and require owners to connect to city water, power and sanitary systems, as well as require permanent restrooms.

Requiring food cart pods to provide infrastructure is a way to make sure the owners are invested in the community, in contrast to temporary carts looking to just profit during the summer, he said.

Morrisey recognizes the concerns about competition, but sees food cart pods benefiting residents, who often can’t find a spot at a restaurant in the summer anyway. Because most are owner-operated, he feels food carts wouldn’t exacerbate the region’s employee shortage.

“Competition is a good thing. It provides better, diverse options,” Morrisey said. “I don’t see the pie as limited.”

Morrisey’s plan has been meet with mixed reviews by the City Council, but for the most part, he feels the community is supportive. The pushback is more intense among the older generation of restaurant owners, who started their businesses within a different economic and cultural context.

“Investments are huge for brick and mortar,” Morrisey said. “Food carts have low barrier to entry. It gives local people a chance to try an offering and see if it’s right,” he said. “The younger generation is looking to do our own thing.”

In Cannon Beach, there is some consensus that food carts could be allowed for special events or circumstances with the right permits and standards. For many business owners, though, the core of the issue comes down to image.

“We’re not Portland,” said Shelley Crane, owner of The Oil & Vinegar Bar. “We never want to be Portland.”

During a Tuesday work session on the topic, the Cannon Beach City Council decided to look into clarifying language in their event ordinances that could permit food trucks, but appeared to steer clear of considering food trucks for regular operation.

“I don’t know that it’s worth it since only a small number want to see it happen,” City Councilor George Vetter said.

But for Selberg, the food truck discussion should center more around Cannon Beach’s future business owners.

“No one wants to take away business from anyone else. But this makes opening a business more accessible for young people. Maybe it will encourage younger families to come and stay in Cannon Beach,” Selberg said. “There is a way to make this all work. I encourage everyone to be open-minded.”

Glad to see I am characterized as"the older generation" apparently with narrowed views, I have no problem with an existing business having a food cart if it does not effect parking. My issue has and is still, outside businesses coming into the farmers market as a retail opportunity, rather than a farm to table, handcrafted, or homemade item, which is what the Farmers market is suppose to be. Food carts are the same thing, introducing a retail opportunity at a reduced cost. While paying no taxes and taking the money they earn out of the community.