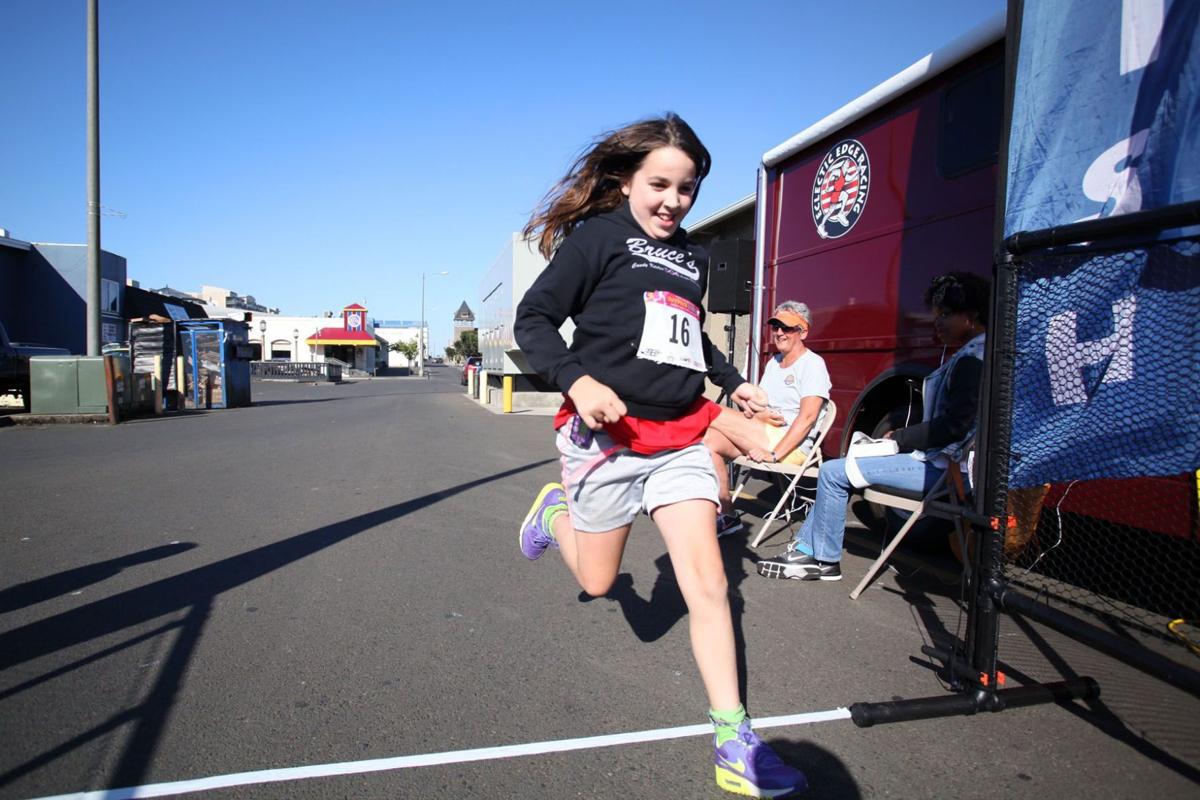 Emma Mekenas, 10, crosses the finish line of the Outpace Diabetes fun run, held in downtown Seaside Sept. 14. She was diagnosed with Type 1 diabetes in December 2012. 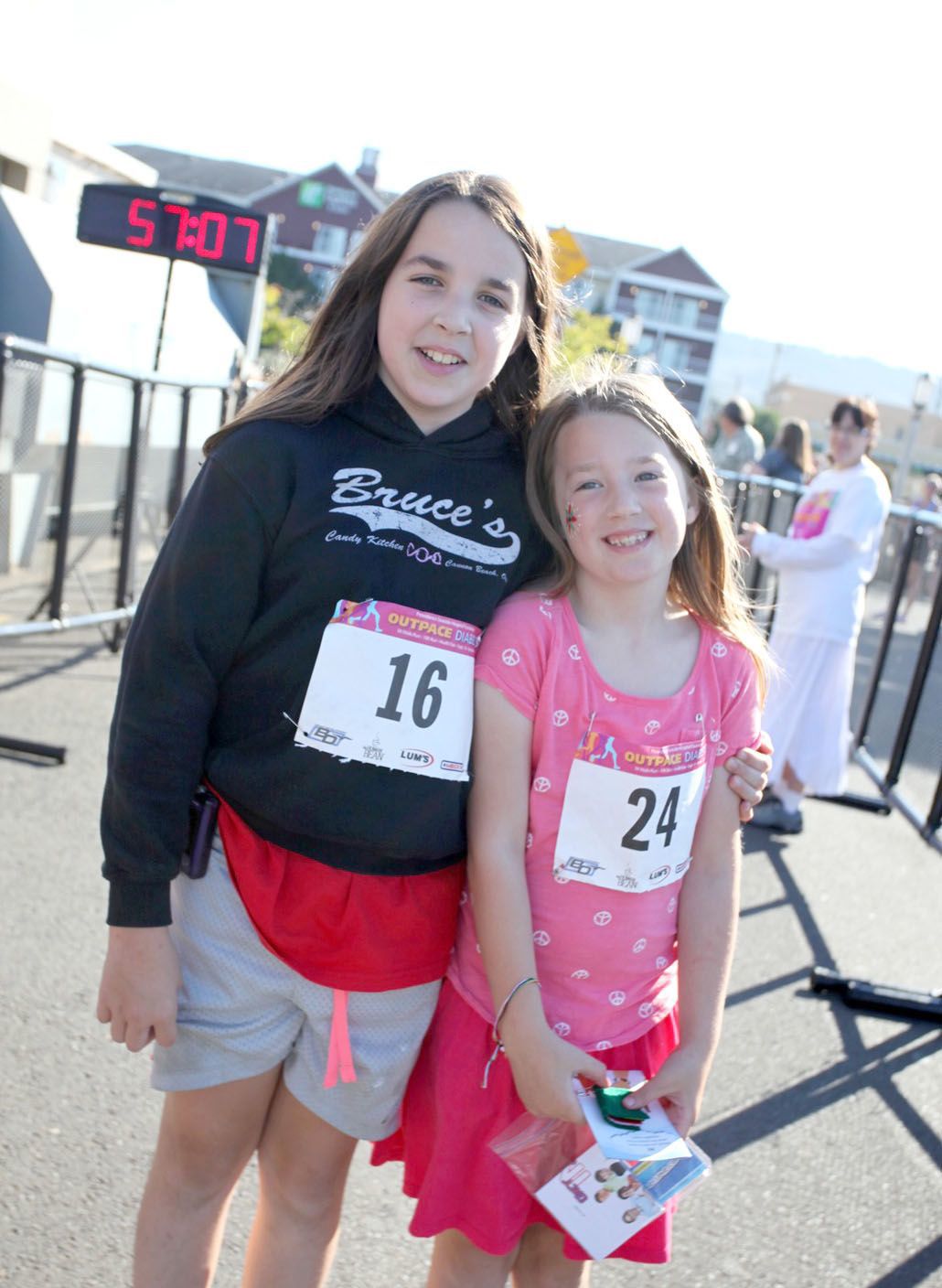 On the left is Emma Mekenas, 10, and her sister Sabrina Phillips, 6, at the Outpace Diabetes fun run. The proceeds help pay for medical care needed by local residents with diabetes.

Emma Mekenas, 10, crosses the finish line of the Outpace Diabetes fun run, held in downtown Seaside Sept. 14. She was diagnosed with Type 1 diabetes in December 2012.

On the left is Emma Mekenas, 10, and her sister Sabrina Phillips, 6, at the Outpace Diabetes fun run. The proceeds help pay for medical care needed by local residents with diabetes.

Emma Mekenas, of Cannon Beach, remembers having a meltdown at age 8 when, on Dec. 7, 2012, she was diagnosed with Type 1 diabetes.

The symptoms had developed out of nowhere, her mother, Jennifer Mekenas Phillips, said. Emma Mekenas suddenly started experiencing fatigue, increased thirst, frequent urination and rapid weight loss, dropping about 10 of her 65 pounds within a month.

The results from Providence Seaside Hospital made Emma burst into tears; she knew that having the disease meant having to get shots.

“That was pretty scary for me,” she said.

Now a 10-year-old fifth-grader at Seaside Heights Elementary School, Emma has learned to embrace her condition, manage it and use it to help others.

On Sept. 14, she ran 5 kilometers in the hospital’s Outpace Diabetes fun run, a fundraiser for the Providence Seaside Hospital Foundation that provides medical care to local residents with diabetes. The event began in Quatat Park, moved through downtown Seaside toward the turnaround at Promenade and ended at Quatat.

“It makes me feel good to see that people care that we have diabetes,” Emma said. “It’s a big deal.”

Type 1 diabetes is a disease of the pancreas, an organ that produces insulin when one eats. Insulin helps the sugar in one’s blood enter the body’s cells.

The disease erupts when the pancreas shuts down and stops producing insulin, which leads to a buildup of sugar in the blood, a condition called “diabetic ketoacidosis.” This can lead to diabetic comas and, eventually, to death if gone untreated.

That’s why diabetics, like Emma Mekenas, have to take insulin from an outside source.

As she feared, she had to take insulin shots every time she ate and every time her blood sugar spiked, forcing her to quickly get over her fear of needles.

But for the past six months, Emma has been working with an insulin pump, which automatically computes how much insulin she needs and administers the right dosage through a needle that stays in her body for days at a time.

Diabetes doesn’t stop Emma from being a normal kid.

She plays on her school’s basketball team, in the past she’s played soccer and softball, and she still participates in the school’s P.E. programs and goes on hikes with her teachers.

She has to watch her carbs, but she can still eat birthday cake and enjoy a fairly low-maintenance diet, as long as it contains helpings of fruits, vegetables, whole grains and lean protein.

Just as it’s possible for diabetics to go overboard with sweets, they can also go underboard as well. When Emma’s blood sugar drops, she needs to drink juice, or eat gummy bears or glucose tablets. Otherwise, she gets shaky, nauseas, lightheaded and grumpy.

Spending time with other diabetics has helped her adjust to life with the disease.

In 2013, she and her mom attended a diabetes convention in Portland for people with types 1 and 2. And for the last two summers, she’s attended Gales Creek Camp in Gales Creek, — a camp exclusively for children and their families with Type 1.

“Everyone’s alike there because we all take shots, we have our insulin pumps, and we play games and just have a lot of fun,” she said.

Emma also takes the time to educate her classmates.

Shortly after her diagnosis, she and the school nurse went before her class at Cannon Beach Elementary School (now closed) and explained what the disease is.

For a talent show, she created an informational poster and, before the crowd, tested her blood with her lancet, “which I thought was really brave of her to do in front of all those people,” her mom said.

Emma is spreading awareness of diabetes and its symptoms because “some children don’t know that they have it,” she said. “Some of the children are dying because they have no idea what’s going on.”

Together, they live with Mekenas Phillips’ dad, Mark Mekenas; her mom, Maria Mekenas; her younger daughter, Sabrina Phillips, 6; her nana, Frances Roshak; and their dog, Gidget.