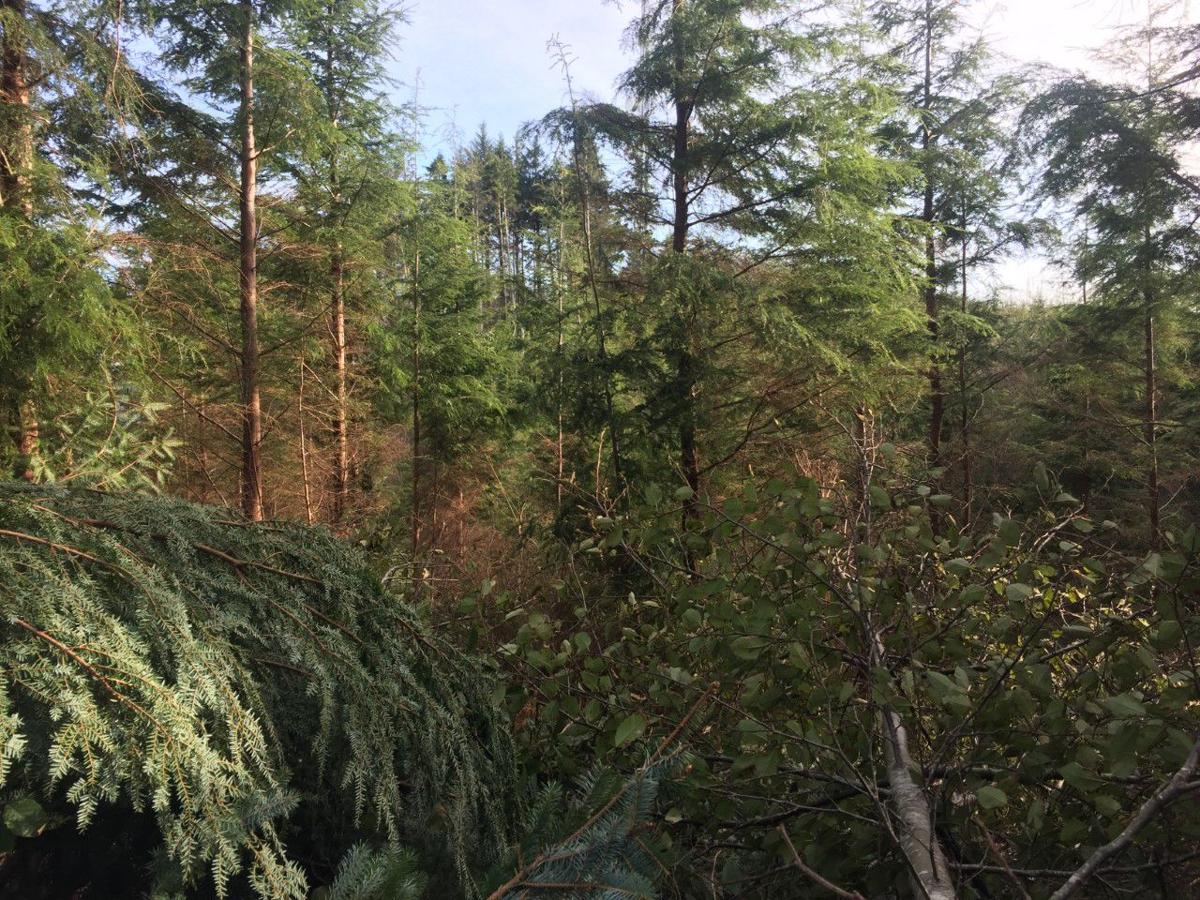 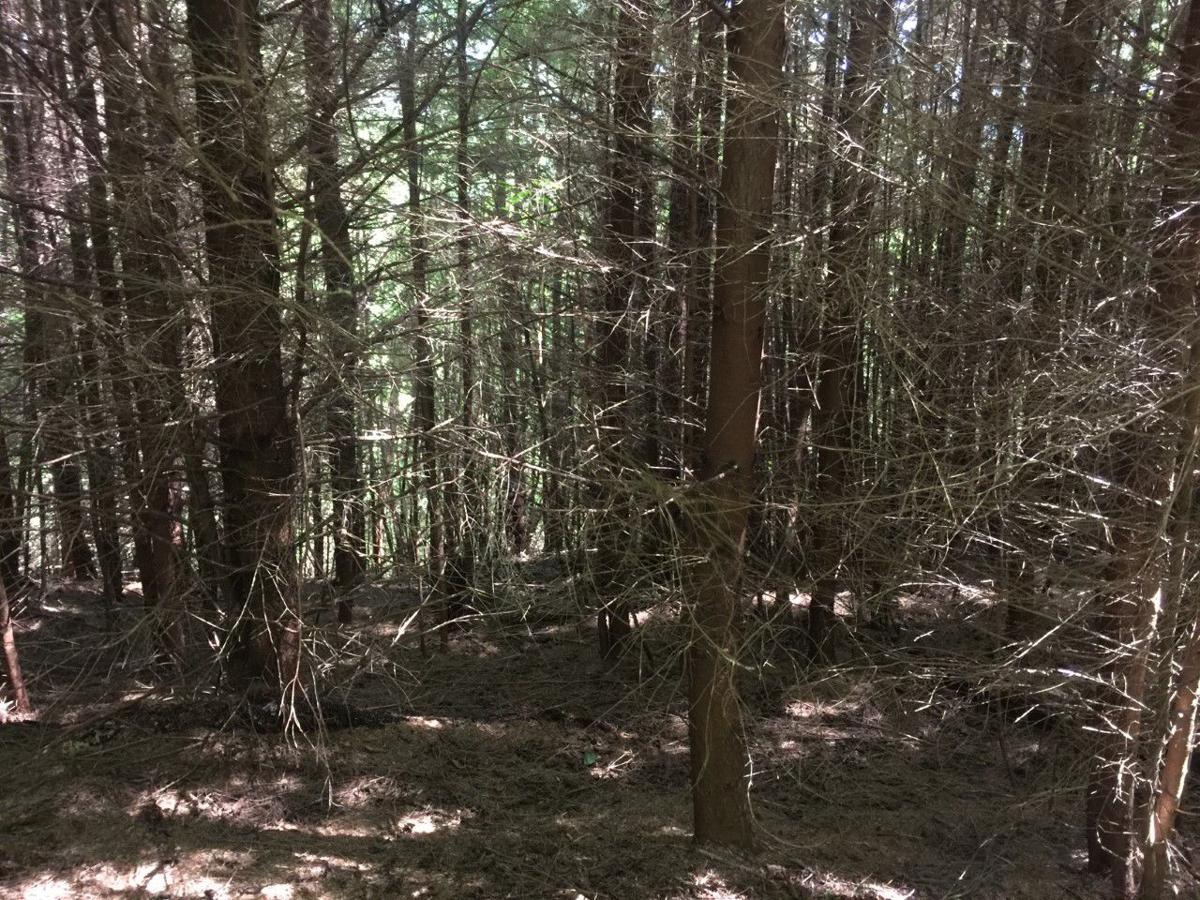 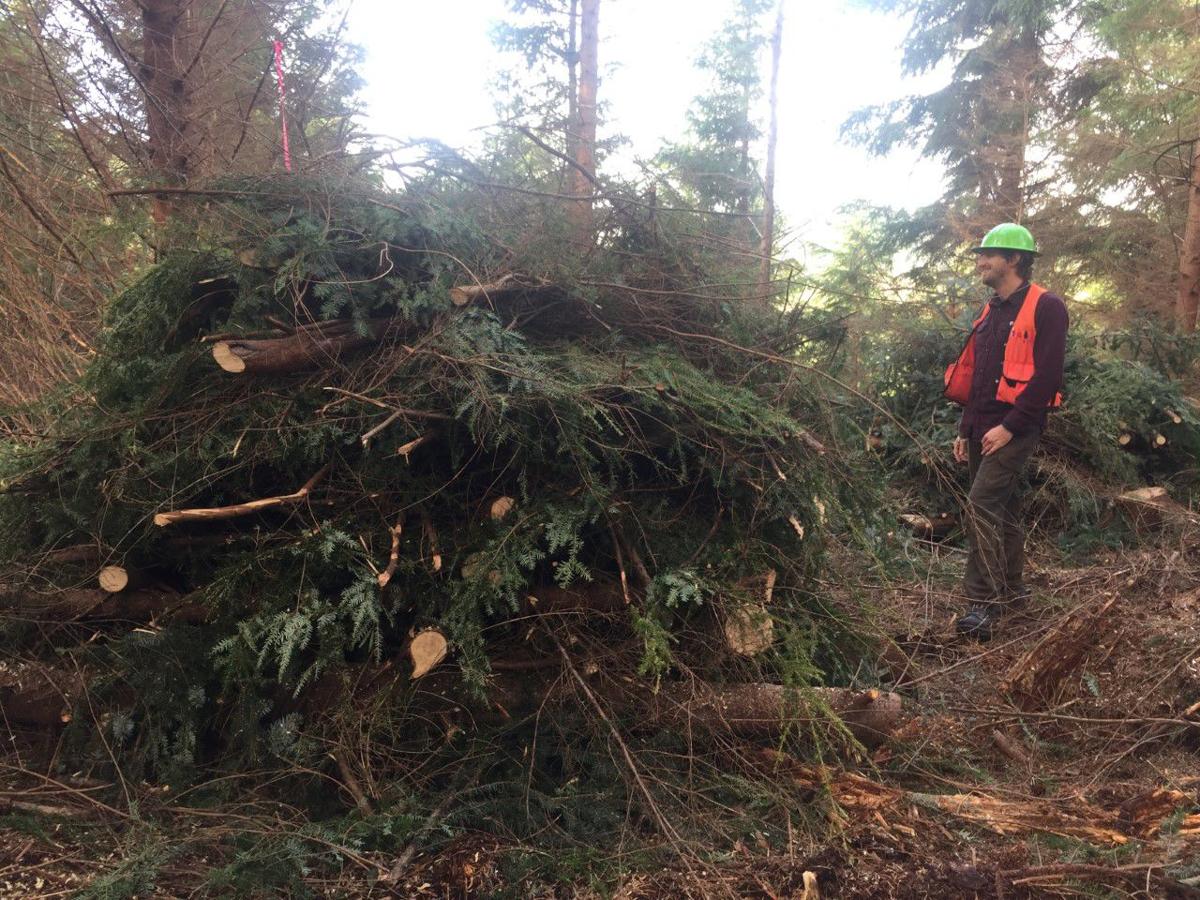 At daybreak on Nov. 6, 15 men armed with chainsaws climbed into pickup trucks and drove up a gravel road onto Boneyard Ridge on Tillamook Head. By day’s end, they would cut a lot of trees. The project they were starting that morning was intended to help trees grow to a ripe old age – ultimately becoming part of a mature temperate rainforest of the kind that once characterized this iconic coastal headland.

Boneyard Ridge is a 340-acre habitat reserve acquired and conserved by North Coast Land Conservancy (NCLC) in 2016. It lies between state park land along the shoreline and NCLC’s own Circle Creek Conservation Center west of the Necanicum River at the south end of Seaside. The forest here is all second growth, and one 85-acre portion, densely planted with now-20-year-old hemlock and spruce trees, needed to be thinned to improve forest health. By the time the thinning project was completed ten days later, the forest here was nearly one-third as dense, transforming from about 630 trees per acre to 220.

NCLC has explored various options for thinning the forest, including logging by helicopter and selling the removed timber. The approach the conservancy settled on was more cost-effective and ecologically beneficial. The thinned trees were left on the ground and some were arranged in “habitat piles” mimicking large downed wood. Here amphibians such as the giant Pacific salamander and red-legged frog can find the kind of damp, dark shelter they need, and birds ranging from pileated woodpeckers and mountain quail to and migrating songbirds can perch and survey the forest as they forage. As the habitat piles age, the wood will decompose, enriching the forest soil. A couple of large gaps were left in every acre of thinned forest; here NCLC plans to plant western redcedar and bigleaf maple this winter in an effort to restore the species diversity that historically characterized the forest on Tillamook Head.

“It speaks to the role of the entire watershed, not just the creek itself, in maintaining healthy salmon habitat,” Reich said in a press release.

Few land conservancies have taken on restoration of young conifer forests such as this, she added.

“We are pioneering techniques that we may be able to use in the proposed Rainforest Reserve,” Reich said in the release.

“The ultimate goal of this project—to create a healthy, mature forest—takes time and will not be accomplished in our lifetimes,” Reich said. “In the meantime, we wanted to make sure the project contained elements to benefit wildlife as much as possible.”

NCLC worked with a number of forestry partners to plan the large-scale restoration project, including Northwest Natural Resource Group, Springboard Forestry and GreenWood Resources. Funding was provided by the U.S. Fish and Wildlife Service Coastal Program, the Oregon Wildlife Foundation and the Oregon Watershed Enhancement Board.