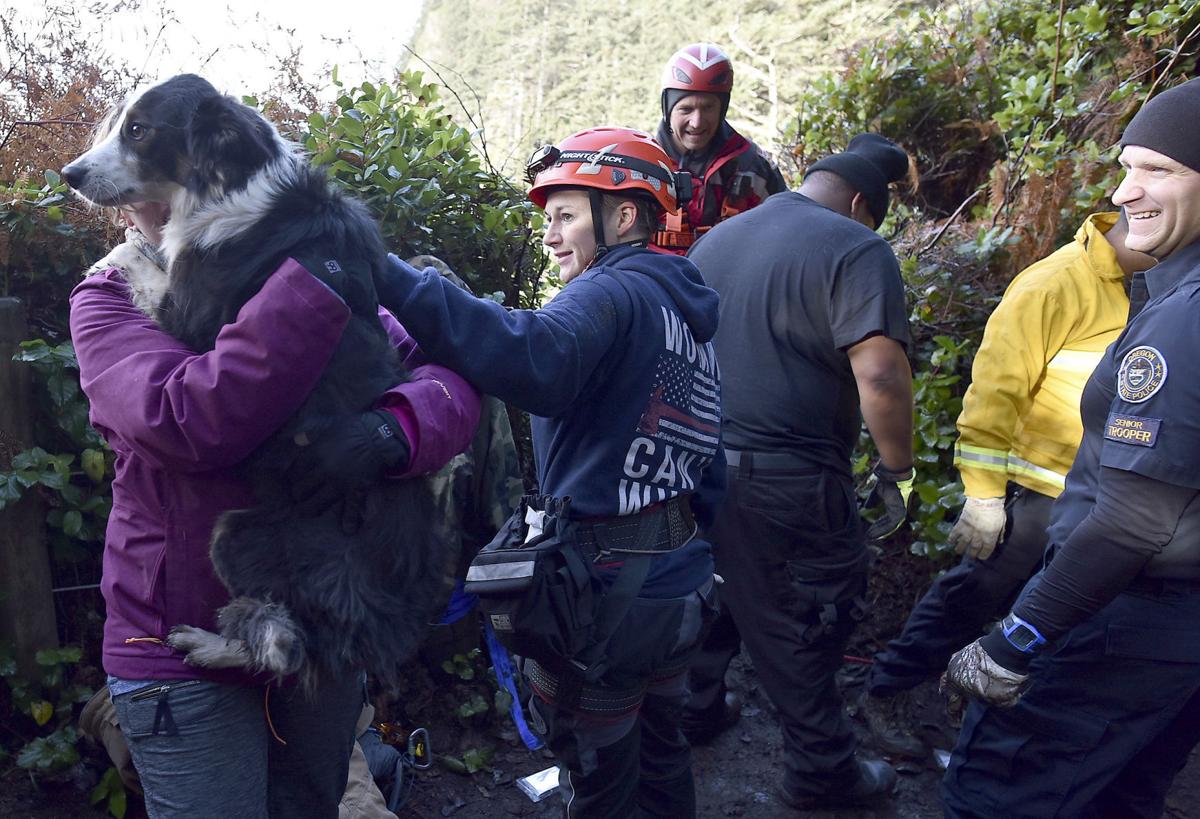 Highly trained members of the Seaside rope and rescue team rescued a dog that fell off a cliff while hiking with his owner at Ecola State Park. 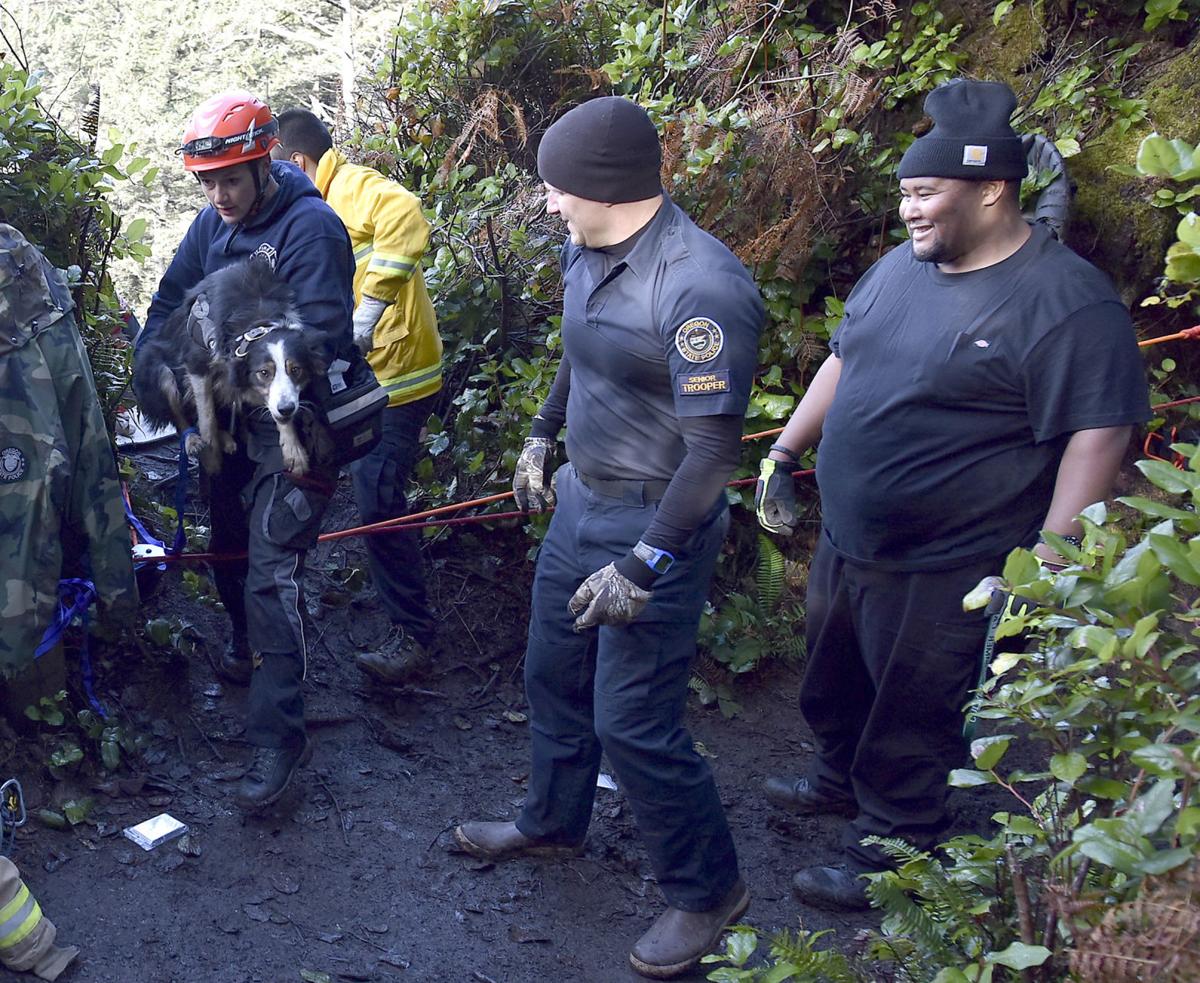 Felix the border collie was rescued Tuesday by the Seaside rope and rescue team.

Highly trained members of the Seaside rope and rescue team rescued a dog that fell off a cliff while hiking with his owner at Ecola State Park.

Felix the border collie was rescued Tuesday by the Seaside rope and rescue team.

The fear associated with a pet gone missing is a feeling most owners never want to experience.

Felix, a 2-year-old border collie, made headlines after he went missing around 3 p.m. Christmas day while on a hike with his owner, Sarah Stremming, in Ecola State Park. He was rescued unharmed from a precipice 60 feet from the crest of the Clatsop Loop trail by the Seaside rope and rescue team.

Thousands of visitors and locals bring their dogs on trails like the ones in Ecola State Park each year. Since Felix’s rescue, many Daily Astorian readers have asked why he was not leashed. Others are concerned with the risks taken by first responders, as well as the resources the rescue required.

So what can owners do to keep their dogs out of this situation?

“I know people hate to keep their dogs on a leash. But there’s a reason we ask, and a worst-case scenario can happen when they aren’t,” said Richard Walkoski of Oregon State Parks. “I would hate to see someone have a part of their family not with them because of it.”

Oregon State Parks requires dogs be physically restrained while hiking on trails, unless the area is specifically designated as off-leash. That means an owner must be holding them, holding onto their collar, or have them on a leash no longer than six feet.

Aside from getting lost, leashing dogs also prevents them from tangling with wild animals or other people’s pets, getting lost, ransacking campground garbage, damaging plant life or being hit by a car, Walkoski said.

While situations like this are rare, staff offer many off-leash warnings throughout all of the state parks, and after multiple warnings can issue a fine of at least $110, Walkoski said.

“We want to see all visitors, including four-legged kind, in the same good shape they went out in,” Walkoski said.

Stremming, a professional dog trainer at The Cognitive Canine in Seattle, chose to walk Felix off-leash on the hike, she said. If she were to go back, she’d invest in a GPS tracker that would have let her know where he was sooner and done more research about the trail conditions.

“I knew there were outlooks, but I wasn’t aware of how close sheer cliff faces were,” she said. “Had I researched that more thoroughly, I would have kept him closer on a leash.”

While Stremming was aware of the rule, she stressed the importance of what walking a dog off-leash can do for their mental health, she said.

“The fact is, every other dog I saw on the trail wasn’t on a leash. Most don’t observe the rule. They all happened to be okay,” Stremming said. “I know what people want to hear me say is I’m going to keep my dog religiously on leash. But I will continue to (go off-leash).”

She recognizes the resources that were spent to conduct the search and rescue mission, and plans to make “big donations” to Seaside Fire and Rescue as well as the Hamlet Fire Department for contributing the drone that helped locate her dog on the rock face, she said.

“I know it wasn’t a safe operation, and that’s why I plan to give back,” she said.

To avoid similar situations, Cati Foss of Arnicadia Dog Training said hikers should practice recalling with their dogs and to check in more often the usual. She also suggested checking trail terrain and weather conditions to know what type of hazards to expect.

“If you know there are cliffs, check in more frequently, so you aren’t running into issues where they get intent on smelling something and get into situations where they get stuck,” Foss said.

Foss recommends both on-leash and off-leash training. Dogs are allowed to be off-leash on Oregon beaches as long as owners can exercise “direct control,” according to the Oregon State Parks website.

“It’s an important skill set to be able to maintain control and also walk on a leash politely. A lot of dogs go on their own when leash comes off, and the impulse control goes,” she said.