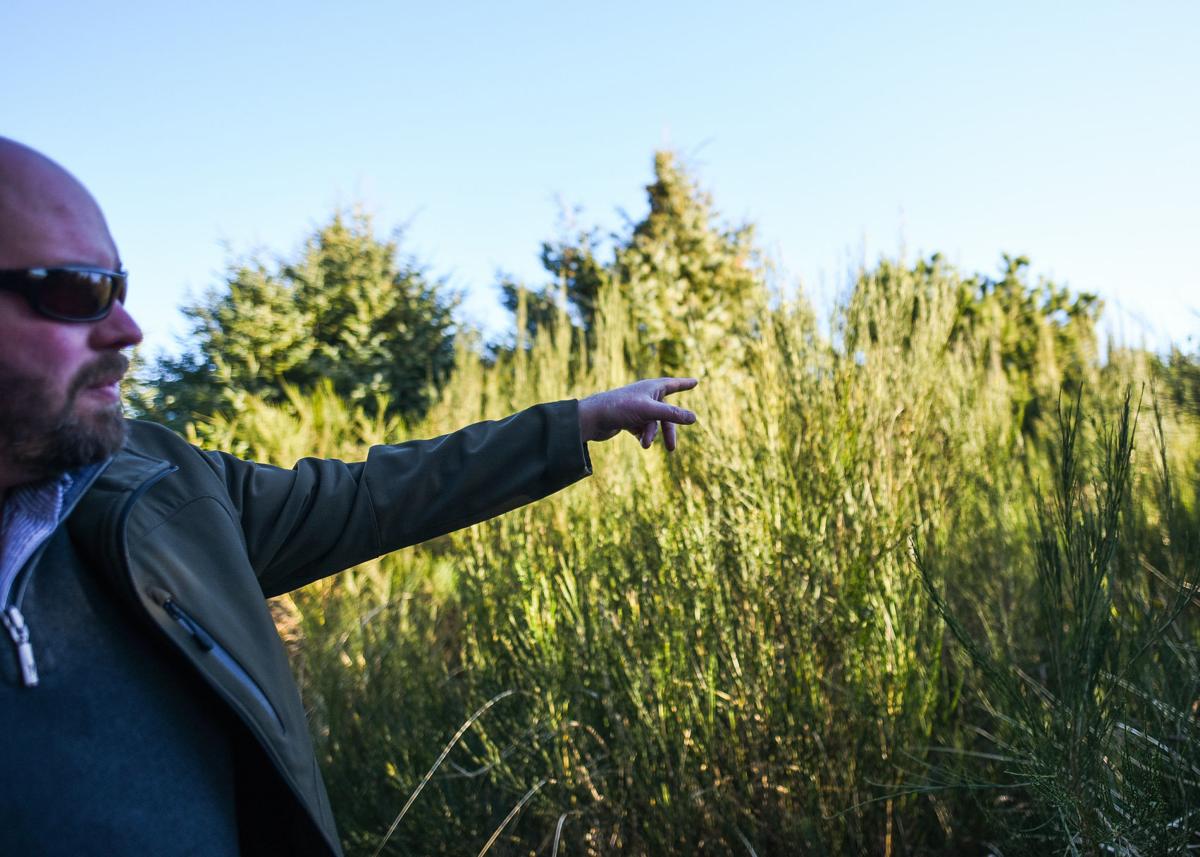 Gearhart City Administrator Chad Sweet points to thick growth of the invasive species Scotch broom along the Fire Trail on Tuesday in Gearhart. The city of Gearhart is looking at options for controlling the plant along the beach. 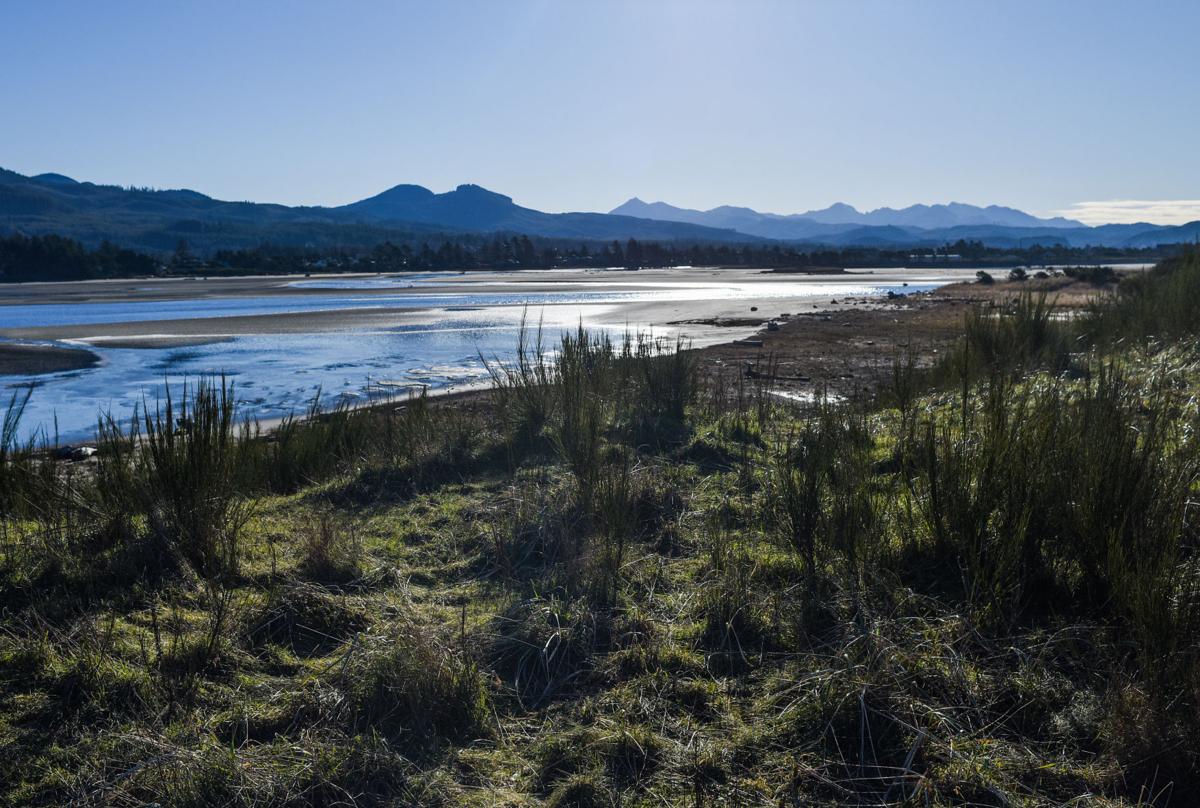 The Scotch broom plant can be seen with a view along the Fire Trail in Gearhart. 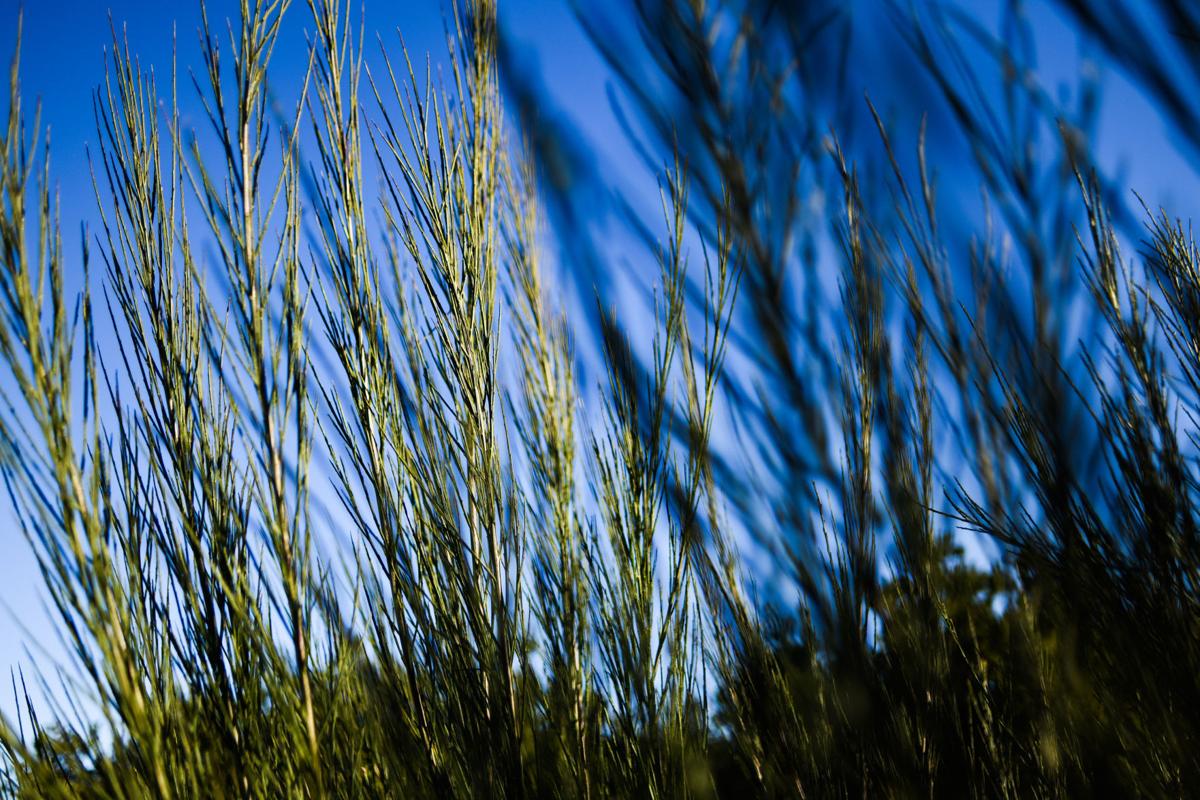 The invasive species Scotch broom grows on the beach of Gearhart, seen here along the Fire Trail on Tuesday in Gearhart. The plant has expanded growth along the beach over the years and the city is looking at options to remove some of it.

Gearhart City Administrator Chad Sweet points to thick growth of the invasive species Scotch broom along the Fire Trail on Tuesday in Gearhart. The city of Gearhart is looking at options for controlling the plant along the beach.

The Scotch broom plant can be seen with a view along the Fire Trail in Gearhart.

The invasive species Scotch broom grows on the beach of Gearhart, seen here along the Fire Trail on Tuesday in Gearhart. The plant has expanded growth along the beach over the years and the city is looking at options to remove some of it.

Residents have seen vegetation on Gearhart dunes west of Ocean Avenue and south of E Street multiply over the last two decades. The city now grapples with whether to address the noxious weeds, shore pine trees and other species covering the dunes with a management plan or continue to let the vegetation grow in the city park area.

“We have the ‘no plan’ plan, and I think that’s one of the reasons why we ended up where we are today,” City Administrator Chad Sweet said. The noxious weed Scotch broom covers the dunes, some up to 10 feet tall or higher.

Residents filled the Gearhart Fire Station on Thursday night for an education forum and town hall meeting on dune vegetation, where they listened to city officials, state parks representatives and other experts. The panel was organized by Margaret Marino, a resident who has expressed concerns about the vegetation at city meetings and reached out to state departments and ecologists for assistance.

While some residents enjoy the vegetation and worry that management practices could impact wildlife, others are concerned about public safety, fire hazards, invasive species and more.

“We’ve got many non-native species in there and we’ve got very invasive species, not just Scotch broom, but species such as thistle, blackberry vines that continue to spread due to birds,” ecologist and panel participant Kathleen Sayce said. “I am interested in restoring the prairie that was there, which is a handful of native species of grass.”

Sayce said the city taking a hands-off approach “leads you into a mess in the long term.”

Gearhart Police Chief Jeff Bowman said the trees and other dune vegetation could lead to larger problems, from widespread camping violations to potential assaults, if the city does nothing.

“We, by not doing anything, are inviting people in to live, to camp,” Bowman said. “It’s bad for Gearhart to have all that, in my opinion, as a law enforcement officer. You can’t see 5 or 6 feet in front of you half the time and I usually have my gun out because I don’t know who I’m going to encounter.”

Bowman has located campers, college students and homeless people staying in secluded areas in the dunes. It took him several days to find three people living in the area.

Gearhart Fire Chief Bill Eddy said he has watched the vegetation on the dunes grow over the past 20 years.

If a fire occurred in the dunes, the Fire Department would not enter the area because “the fuel load is so great out there that you don’t want to get anywhere close to it.”

“This site is probably never going to be what it once was, but it can be a managed natural landscape that works for safety, fire, city and animals, too,” said panel participant Vanessa Blackstone, wildlife biologist with the Oregon Parks and Recreation Department.

Families and volunteers have pulled out Scotch broom in the area in past years, but the efforts have not made a major difference. A plan for managing the vegetation could be a “fight against Mother Nature” but is an option, Sweet said.

Managing the dunes would likely require a city code amendment. The dunes are in an overlay district, which requires that plants are not cut by more than 50 percent. The city could include an exception in the code that might allow further vegetation management if the council approves a report by a certified professional.

Potential changes would go through a public process at Planning Commission and City Council meetings.

“We’re just trying to learn something,” Sweet said. “We don’t have a policy yet.”

Some citizens expressed concerns about disrupting birds and wildlife in the area with potential management methods, such as mowing and herbicide spraying.

Sayce said management would be seasonally specific and not during nesting season.

Though some species will lose while others will benefit from the vegetation management, the species that use the area are common, not endangered, Blackstone said.

No cost estimates are known, but some mentioned the possibility of obtaining grants.

“I believe we have an opportunity,” Marino said.

Fort Stevens Park Manager Justin Parker, another panel participant, said Oregon Parks and Recreation would be open to partnering with Gearhart on a dune vegetation project. “We definitely want to be a resource,” he said.